The latest reports from the Intergovernmental Panel on Climate Change (IPCC) have reiterated the call for 80% of our electricity supplies to come from low-carbon energy by 2050. WWF also released a report this year claiming 80% of China’s power could come from renewables by this date, setting an example for the rest of the world.

As energy ministers from around the world meet in Seoul to discuss the advancement of clean energy, we asked a group of experts what China can play in the global renewables market – and how seriously to take these figures.

China has seen such incredible growth in renewables because this has been an unusual period, not because of attempts to grow the solar sector. First, EU anti-dumping measures targeting solar-power products provided an opportunity for the domestic market to grow. Without that, we wouldn’t have seen such expansion. Second, growth has been so rapid because we’re starting from a small base – it won’t grow so fast in the future.  Third, air pollution has forced China to cut coal use. This period has seen a number of special, but unsustainable, policies: subsidies for solar power won’t last forever.

Also, before we bet on renewables, we need to look at the reality of the costs. First, what are the social costs of abandoning existing coal-power plants? We have 860 gigawatts of coal power in operation. That’s locked in for the next three decades at least. Second, what are the new costs of using renewables? Currently we only discuss the electricity generating costs, but there are also increases in operational costs. The grid will need storage and back-up generating capacity, as solar and wind aren’t stable sources of power. If these account for such a high proportion of total power, the costs of coping with unusual circumstances will also be higher.

The US is much more powerful than China, but it hasn’t achieved this goal. This shows the uncertainties of developing renewables. The market is the best proof – the price of oil hasn’t plummeted.

Overall, I find it difficult to believe that renewables can account for 80% of all electricity generation. The assumptions used by WWF would be very hard to realise. I believe that for some time to come China will draw power mainly from coal, for two reasons. One, we have coal – it is our only strength. Second, it’s cheap and everything else is expensive. As long as smog levels are acceptable, we’ll choose coal.

To meet the 80% renewables goal by 2050, China would have to play its role in the global renewable industry not just as a manufacturer and consumer, but as an energy innovator. China’s juggernaut capacity in solar and wind manufacturing has been the focus of the world’s attention and several trade cases. Since 2008, China has been the largest solar-panel producer in the world. In 2012, China produced 27% of the world’s polysilicon, 80% of the world’s wafers, 66% of C-Si cells and 69% of C-Si modules. China was the largest producer of wind towers in 2011, and produces approximately 25% of the wind turbine rotor blades. It is the world’s largest and fastest-growing market for renewables, according to the US Energy Information Administration, boasting an added capacity of 16.1 gigawatts of wind and 12 gigawatts of solar in 2013 alone, putting the cumulative capacity of wind to 91.4 gigawatts, and solar to 20.3 gigawatts.

Yet the most crucial thing to watch is whether China can move up the value chain and become a major energy innovator. To some extent, this is already happening. According to the World Intellectual Property Organization, China has logged more renewable energy patents per year than the European Patent Office, and is growing much faster than any other nation. More cumulative patents related to wind and solar technologies have been filed in China than in any other nation. This is by no means to say China is already an energy innovator, yet the country is on the right direction by promoting renewable energy market growth. Efforts to ease renewable financing, promote “green credit”, simplify administrative procedures, and change the government cadre performance evaluation mechanism to make the environment a higher priority would allow for robust renewable market growth. This stimulates innovation even more than publicly funded research and development over long periods of time. 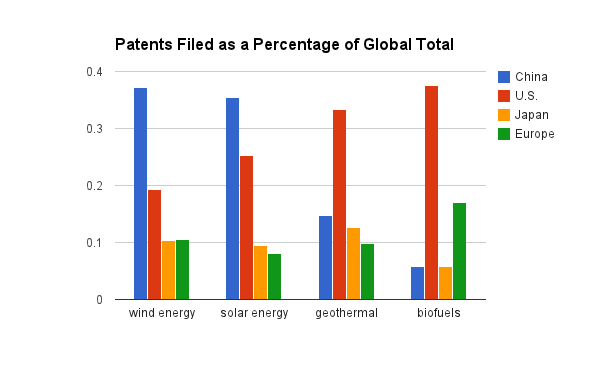 However, obstacles in China’s domestic market remain high and might lower China’s global contribution in the long run: China’s grid expansion as well as the introduction of smart grid and energy storage technologies are not keeping pace with the country’s rapid expansion of renewable energy. The reform of the energy pricing mechanism, investments into grid expansion and related technologies as well as the opening up of the sector for private investors and international cooperation are not yet effective enough to widen the serious bottlenecks China’s renewable energy market is facing. China’s power grid development is in dire need of additional national support and more international cooperation. Without that missing link, China’s potential for contributing to the world’s sustainable-energy transformation will be stifled.

In light of the still rather hesitant reform initiatives of the last months and years this first and foremost calls for a rethinking among China’s political leaders. However, the call also goes to Europe and other developed countries. The potential for a beneficial impact of China on the global expansion of renewables is high. It is in Europe’s own interest to work with China on the removal of the obstacles that are slowing down the energy transformation on both sides.

China has been the leading force both in renewable energy manufacturing and deployment. The country is already the largest installer of wind power and broke the single year solar installation record in 2013. The obstacles for renewable-energy development, however, are still tremendous. While absorbing the initial renewable energy uptake with painful problems such as grid curtailment, China’s power system is still frozen in the 1990s. Power sector reform has been at a standstill for decades, leaving the current electricity system more suitable for the history books than the 21st century.

Without bold and effective reforms, renewable energy risks hitting the wall. Curtailment may be exacerbated, investment halted, and the true cost-effectiveness of wind and solar power constrained. None of this is good news for China’s endeavour on environmental and climate protection. While China’s addiction to coal and the roadmap to phase it out have rightfully received a lot of attention recently, the renewable battlefield and the deep and entrenched stalemates in the electricity system also deserve focused efforts.

Low-carbon technology development is happening faster in China than in the EU. This shows that the European renewables market is not sending a clear enough signal to green business. China’s performance must galvanise Europe’s leaders into greater action.

Given the substantial share of greenhouse-gas emissions generated by the energy sector, the transition towards a renewables-based system, combined with significantly improved energy efficiency, is a must if climate protection is the goal. Renewables also reduce energy import dependency and costs, increase energy security, strengthen local economies, and create jobs. But in the context of the EU economic crisis, and the shale gas boom in the US, powerful interest groups are successfully spreading the narrative that renewables are the main reason for high energy prices, which in turn put Europe – the “lone climate frontrunner” – at a competitive disadvantage.

Instead of a clear commitment to an ambitious increase of renewables in the EU’s energy mix, the European Commission has only proposed a headline greenhouse-gas emissions reduction target for 2030. The proposal – for 27% renewables – is slightly higher than business as usual scenarios and can hardly be called ambitious. It is furthermore meant to be non-binding at the level of EU member states.

Since the trend is for conventional energy to become more expensive and for renewables to become cheaper, a shift towards renewable energy sources pays off in the medium and long term. Stable regulatory conditions contribute to further decreasing technology costs. Rather than pushing renewables businesses outside of Europe, the EU should take note of what’s happening in China and fully tap into the potential of huge global markets for innovative eco-products.