On a fine morning in April 2022, Mount Everest can be seen clearly from the Sagarmatha (Everest) National Park office in Namche, northeastern Nepal, the snow from its peak evaporating to form a thin layer of cloud. Bishnu Rokaya, the park’s assistant conservation officer, has little time for the beauty on display as he flips through the pages of their latest annual report. He points to a passage stating that, “from mid-2020 to mid-2021, over three hundred livestock [animals] were killed by wild animals in the park and its buffer zone areas, for which we have paid the communities a sum of over 9 million rupees [USD 85,000 USD] as compensation for their losses.”

Himalayan wolves – one of the Nepal’s least-studied wild animals – are playing an outsized role in the problem.

According to the report, of the 323 livestock animals killed, 234 – over 70% – were killed by Himalayan wolves, known locally as bwasho. And this number has been rising year on year, says Rokaya. “We don’t know the exact reason for this increased number of casualties, but it has become a very serious issue for us and the communities in recent years,” he says.

The Himalayan wolf, also called the Tibetan wolf, has a population of several thousand in adjoining Tibet, but the number living in Nepal is unknown. “Much of conservation focus has been on snow leopards in the high mountains due to which wolves have received negligible attention, but both are the top predators in the region,” says Naresh Kusi, country program director at the Himalayan Wolves Project, who has been researching wolves for the past few years.

Factbox: The Himalayan wolf may be a separate species

The scientific status of the Himalayan wolf is unclear, though research has shown it is genetically distinct from other Eurasian wolves.

“Studies on wolves from Asia are fewer [than on other wolves] and the taxonomy of various Asian wolf populations is not clearly established,” stated a recent scientific review on Asian wolves led by Geraldine Werhahn, director at the Himalayan Wolves Project. The review concluded that the Himalayan wolf, as well as the Indian wolf, are distinct enough to be considered separate at the subspecies or species level.

“Our research suggests that Himalayan wolves are genetically different and adapted themselves to low oxygen levels at high altitude and are eligible to be a subspecies,” says Naresh Kusi of the Himalayan Wolves Project, adding that its status is now under review by the International Union for Conservation of Nature. In the meantime, Nepalese law still lists its wolf population it as the grey wolf, as a nationally endangered species.

While the current presence of Himalayan wolves in Nepal’s mountains is beyond doubt, how long a resident population has been present is contentious.

“Wolves were here for ages but they hadn’t colonised [the areas in Nepal] permanently as their big population is in Tibet just across the border, where abundant prey species are present compared to Nepal’s mountains. Those temporary populations were often killed by herders as retaliatory killing which wouldn’t have [come] to the notice of park authorities as the population was small,” says Kusi.

Locals also say that while wolves have long been present in the area, until recently there had been no serious conflict except occasional retaliatory killings by herders. “We had wolves in the Everest region when I was a kid,” says Lhakpa Norbu Sherpa, who served as the first chief conservation officer of the national park in 1983. “There were wolves even before the park was established in 1976 but complaints of livestock killing increased sharply after 2015.”

Many locals believe the apparent rise in wolf numbers is linked to an import of yaks from Tibet in 2014. That year, 30 yaks were brought over from Tibet via Nangpa La pass – northwest of Everest – to the Syangboche Yak Breeding Centre, to cross-breed and improve the genetic quality of the local yak population. A team of 25 took 16 days to reach the location in Tibet where the Chinese government had delivered the yaks, hiking through thick snow; the return journey with the animals took another seven days. “I just can’t believe how we survived that journey,” says Lalan Yadav, livestock technician at the yak breeding centre. 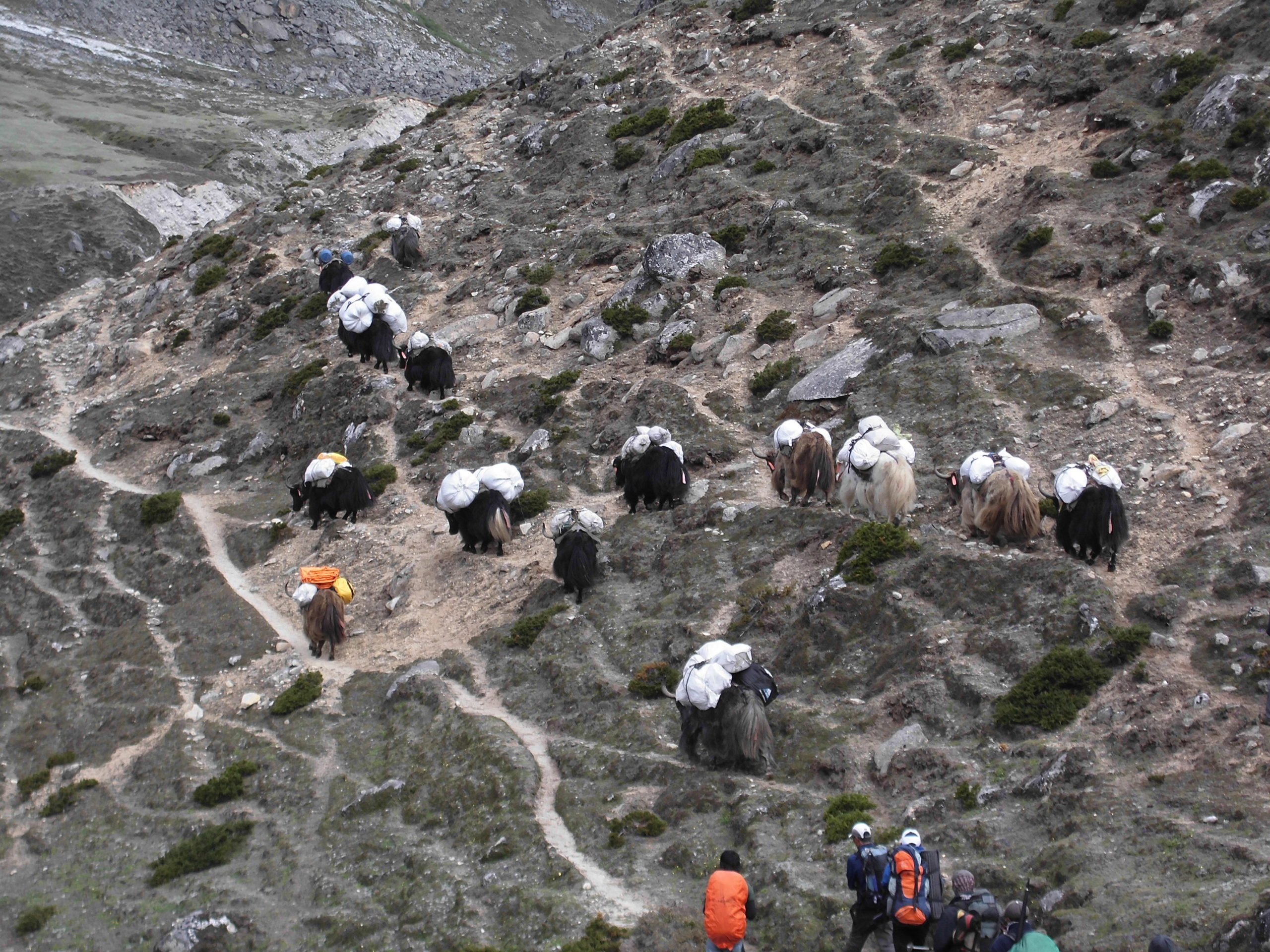 A couple of years after the Tibetan yaks’ arrival, locals started to complain about wolves attacking yaks and other livestock. “Locals have said that a [pack] of Tibetan wolves followed those yaks and then started to live here permanently. I, too, believe it is possibly true,” says Lalan.

Pema Tshering Sherpa is a resident of Khumjung village, a little uphill from the Syangboche breeding centre. He believes that the yaks brought in Himalayan wolves to the region. “Livestock killing has dramatically increased after 2015. That coincides with yaks’ arrival from Tibet, so it must be the reason,” says Sherpa.

Researchers don’t deny the possibility of wolf packs following the yaks from Tibet but, Kusi says, “It needs to be validated with scientific evidence which we don’t have, at least for now.”

In 2015 the government decided to add Himalayan wolves, clouded leopards and wild dogs to the list. “We had started to receive complaints from locals that wolves have been killing their yaks and horses in the region but had no way to compensate,” says Ganesh Pant, an ecologist at the Department of National Parks and Wildlife Conservation, who was chief conservation officer of the national park in 2015. “So we recommended an addition of wolf to the list that allowed us to pay NPR 30,000 [USD 240] for any loss of livestock,” he says.

In 2017, a meeting between park authorities and local herders from the Ngampa valley to the west of Mount Everest was held at the park’s office in Namche. Former chief conservation officer Lhakpa Norbu Sherpa attended, and told The Third Pole how a local herder vented his frustration. “[He said] if you don’t want to kill the wolves, you might [as well] kill us. As a former warden of the park and now an elder from the Nangpa Valley, I felt hemmed in between a rock and a hard place,” Sherpa recalls.

As more cases of conflict were reported in the region, Lhakpa Sherpa and his team conducted a survey of predators in the Nangpa valley over four months in summer 2019. He was able to take pictures of Himalayan wolves in the wild, a rare achievement, along with solid photographic evidence of a leopard, a snow leopard, red foxes, and brown bear paw prints. 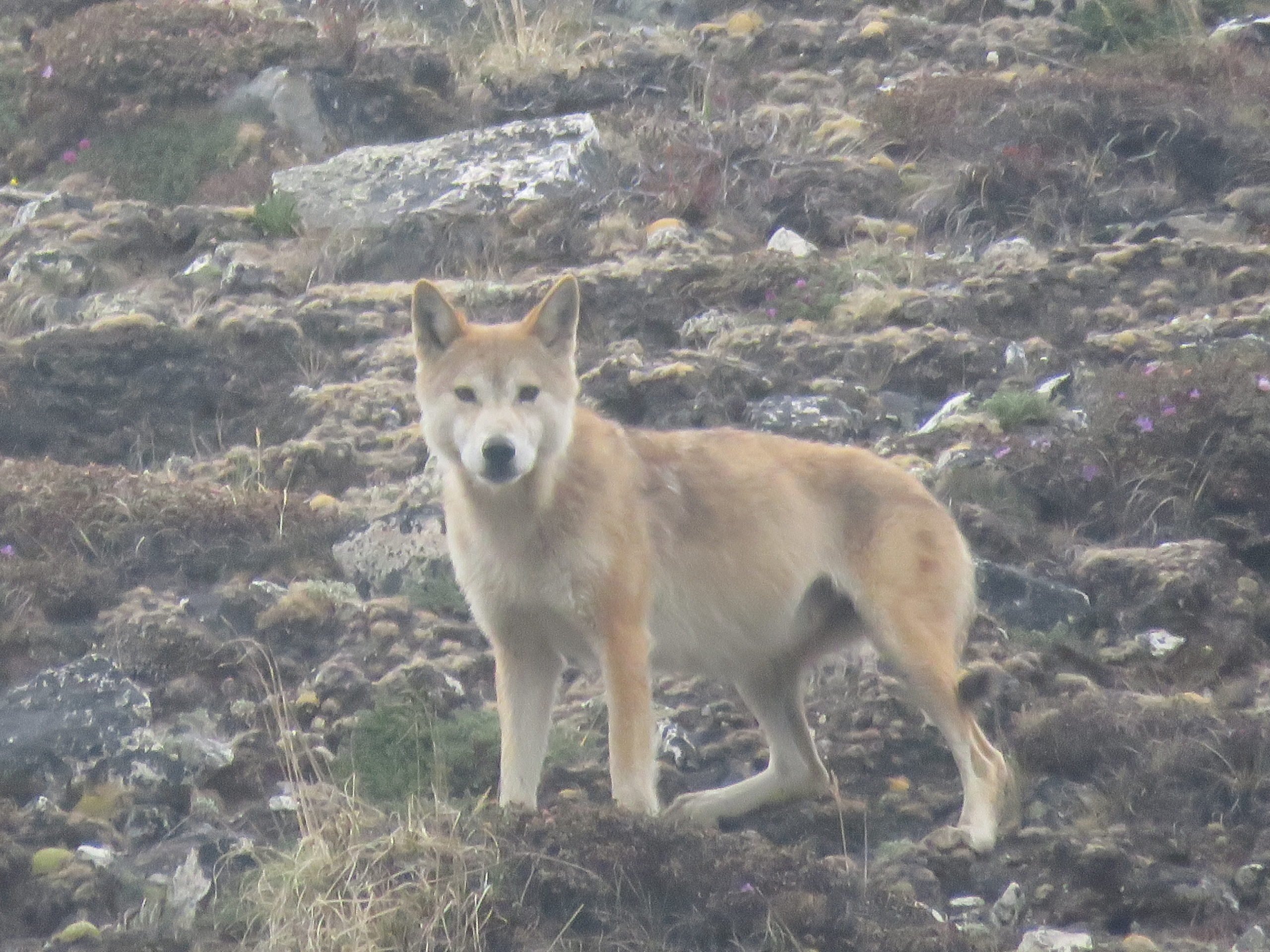 Without research, solutions to conflict are lacking

A 2019 study from central Nepal found that Himalayan wolves selected wild prey over livestock during the summer period despite the seasonally overwhelming abundance of yaks and goats in the study areas. However, Kusi suggests the situation could be different around Everest, in eastern Nepal. “It looks like they have adapted now locally in the Everest region and have increased in numbers too. Possibly due to insufficient wild prey in the region, they might have started to kill livestock more frequently,” he says.

One other reason for the high number of livestock being killed in the Everest region could be surplus killing, when wolves kill almost all animals in a shed or in a group, beyond what they could eat. “We don’t know exactly why they do this but if we invest more on research and understand their behaviour, we can avoid them and can reduce conflict if herders are well informed with reliable information about wolves,” Kusi adds.

But officials at the park say they don’t have the resources to carry out such research. “We have very limited budget so we have a plan to seek support from donors and research organisations to understand more about Himalayan wolves that could help us better plan to mitigate conflict,” said Bhumi Raj Upadhyay, chief conservation officer of the park.

Biodiversity of Hindu Kush Himalayas will plummet by 2100