O Devi Bhagavati Ganga, the Goddess of the Devas, You liberate the Three Worlds with the merciful waves of Your Liquid Form;

O the Stainless Pure One Who resides in the Head of Shankara (Shiva), May my Devotion remain firmly established on Your Lotus Feet.

With this mantra, millions worship India’s holiest river every day. The trouble is, those merciful waves are absent for eight months of the year. The river that starts as the “stainless pure” in the Himalayas (imagined as the head of Shiva) becomes progressively stained as it flows through the Indo-Gangetic plains, till its faecal coliform count is a million times higher than would be safe for drinking.

In short, the Ganga has little water for much of the year, and the contamination of that little exceeds description.

All this is known, but successive attempts to clean the river through versions of the Ganga Action Plan (started in 1983) have failed. Namami Gangge, the current avatar of the plan, has proved equally futile so far.

There are two main reasons for the failure. The governments of the states, municipalities and panchayats through which the Ganga and its tributaries flow see little incentive to clean up. The result is billions sunk in sewage treatment plants, which either do not work or are unconnected to the main sources of sewage. The second reason is that during non-monsoon months, there simply isn’t enough water to carry the pollutants away.

A river is a river only when water flows through it. Except during the monsoon, the Ganga fails this basic test.

This book shows you why. For seven years now, thethirdpole.net has been reporting on the state of the Ganga, the main river of the most crucial river basin in South Asia. Over 400 million people depend directly on the waters of the basin. 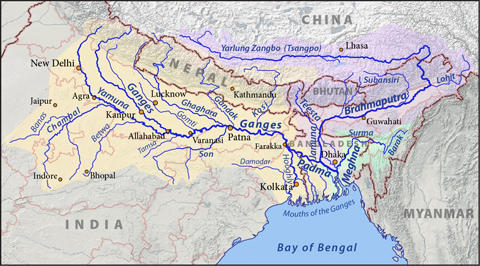 This book is a compilation of the most important articles on thethirdpole.net on the Ganga, from the source to the sea. It describes the sorry state of the Gangotri glacier, from whose snout the main stem of the Ganga emerges. Like most other glaciers in the Himalayas and elsewhere in the world, the glacier has been retreating due to climate change. A recent report said the rate of retreat had gone down since 2008, and this was hailed as good news. But most media reports glossed over another part of the same scientific study, which said the base of the glacier was thinning rapidly.

From the glacier through the mountains, the streams and rivers that make up the Ganga run in a way described as the matted locks of Shiva’s hair in Indian poetry through the ages. But now the other meaning of lock is coming into play, with dams on the rivers and more planned. Already, the water flow is diminished.

This becomes grievous in the foothills, where the Upper Ganga Canal diverts most of the water away from the river. From then, the Ganga becomes the kind of trickle that Eric Newby had so much difficulty navigating in the winter of 1963-64, and which led to his epic Slowly Down The Ganges. Cities and villages throw untreated effluents into this very diminished flow. That includes the infamous tanneries of Kanpur, a horror described in detail in this book.

By the time the Ganga reaches the holy city of Varanasi – around halfway through its journey to the sea and the parliamentary constituency of Prime Minister Narendra Modi – it is a river only in name. As reported in this book, to pray to the river, every day thousands stand neck deep in sludge and water that does not flow.

The river does get rejuvenated thereafter due to fresh water from tributaries that flow down from Nepal. But, as described in this book, some of these tributaries (such as the Koshi) already have serious problems, partly due to unplanned development. Others have dams planned on them. Then it all goes down to Farakka, where the barrage built to save Kolkata port has created many more problems than it has solved.

With Bangladesh complaining bitterly about the Farakka barrage reducing the lean season flow of the Ganga’s main distributory the Padma, the transboundary nature of the river is now very much in focus. As described in a factual and dispassionate manner in this book, it is a problem that has been partially solved by the 1997 Ganges Treaty between India and Bangladesh, but much more remains to be done. And will the Ganges barrage planned further downstream in the Padma help? There are different points of view. The Bangladesh section of the Ganga delta has very serious problems, as reported consistently in thethirdpole.net.

There is one section of the river that is relatively neglected in the conversation around the state of the Ganga, and that is the Hooghly, the other major distributory, the one that flows past Kolkata. That is why this book lays special emphasis on the state of the Hooghly between the Farakka barrage and the confluence of the river with the Bay of Bengal. This is the tidal stretch of the river, so the lack of freshwater in non-monsoon months is not obvious till you notice the water hyacinth floating upstream twice a day.

This is also the stretch where the faecal coliform count goes off the charts, and there is almost no attempt to do anything about it. As also reported in this book, illegal sand mining in the Hooghly is carried out with impunity, from the middle of the riverbed, even as the central government starts to act on its plan to turn the whole stretch from the sea to Varanasi navigable. It has already named this stretch National Waterway Number One, though the only action so far has been dredging that has scared away the endangered river dolphin from its lone sanctuary on the Ganga.

Other violations of the river are so blatant as to be scarcely believable. A stretch of the Kolkata Metro is built on pylons in the middle of the original distributary, the Adi Ganga. All you can see there is garbage, if you can withstand the stink to get close enough. And soon after the last stop of the Metro, the river disappears altogether, with houses built upon it, as reported in this book.

At the confluence of the Hooghly with the Bay of Bengal, climate change effects rear their ugly head again. The rising sea regularly ruins homes and farms with salt water, as reported in this book.

It is an ugly chronicle of a river that was once beautiful and remains holy in the minds of millions. But restoring life to the Ganga is not rocket science. As explained through many reports in this book, what it needs is political will, a consequent enabling policy framework, and implementation.

The March 2017 assembly election results provide another chance to make this political will manifest. For the first time since the current Indian government took office in 2014, it has captured power in Uttarakhand and Uttar Pradesh, the two upstream states of the Ganga basin. For months, Uma Bharti, Union Minister for Water Resources, has been complaining of non-cooperation from the governments of these two states. She can no longer do so. It is time for her to deliver on her promise to have a clean Ganga flowing by the end of 2018.

Explore the online version of the report.