In Tharparkar, 400 kilometres east of the port city of Karachi, the social fabric of the local community is being stripped away, along with the desert soil, due to coal mining.

This is the finding of a 68-page report commissioned last year by Pakistan’s National Commission for Human Rights (NCHR), titled: Thar Coal Project and Local Community, Documenting Views and Experiences of Stakeholders. It is grim reading for anyone hoping that the Covid-19 pandemic will help Pakistan make a green transition in its economic policy.

The report covers the familiar impacts of coal mining, from water contamination, dust pollution, destruction of vegetation and loss of wildlife habitat, to the violation of land acquisition and development laws. What sets it apart is the human face it gives to these issues. Interestingly, the biggest concern for many Tharis was never the extraction of coal, but how it will create tears in the socio-cultural fabric of the local community.

Tharparkar – one of Pakistan’s most underdeveloped and drought-prone districts – sits on vast and, until recently, untapped coal deposits. Its coal fields, divided into 13 blocks, are now being developed under the China-Pakistan Economic Corridor. In the first phase, mining and power-generation work started in Block II in 2015, with 1.57 billion tonnes of coal available.

Read: Government unhappy but Pakistan to stay with coal

The NCHR, an independent state body, has been closely following issues in Tharparkar since local protests broke out against the forced acquisition of land to build a reservoir to dump the waste from the mining processes.

The final report – the result of local consultations and field trips – shows how the commodification of land and nature leads to conflicts. It also shows the results of legal battles between villagers and a team of city lawyers representing a multinational company and the state.

The report incorporates the point of view of the mining company – a public-private venture Sindh Engro Coal Mining Company – and other experts, and puts forward recommendations from the community. The authors interviewed villagers near and around Block II, the only block completed so far, and also held informal discussions with villagers living in the Block I, where mining has started.

“This community just did not want anyone extracting coal from their area,” said Zeenia Shaukat, one of the co-authors, referring to her conversations with villagers in both blocks. “They are very rooted in their community and their land and resent the encroachment and forced evacuation in the name of development.” Many of the community’s fears came true, said Shaukat, referring to the “influx of non-locals, displacement and locals only being hired for lowly work by the coal company”.

The report also brings out the callous attitude of the state and the mining company towards the people.

For instance, residents speak about how the outsiders coming into the area has impacted the movement of women who fetch water from wells, chop fuelwood and take care of crops and livestock. “Women of Thar observe veil (purdah) very strictly. The privacy of women … and social set-up of the area will be disturbed,” the report stated.

At the same time, the “mushroom growth of madarsas (religious schools, often backed by religio-political parties)” worried locals. In a number of cases political actors have used the base of such religious schools to organise along sectarian lines, and there is wariness about the impacts of such schools in a region with a Hindu majority that has lived in harmony with Muslims for centuries. 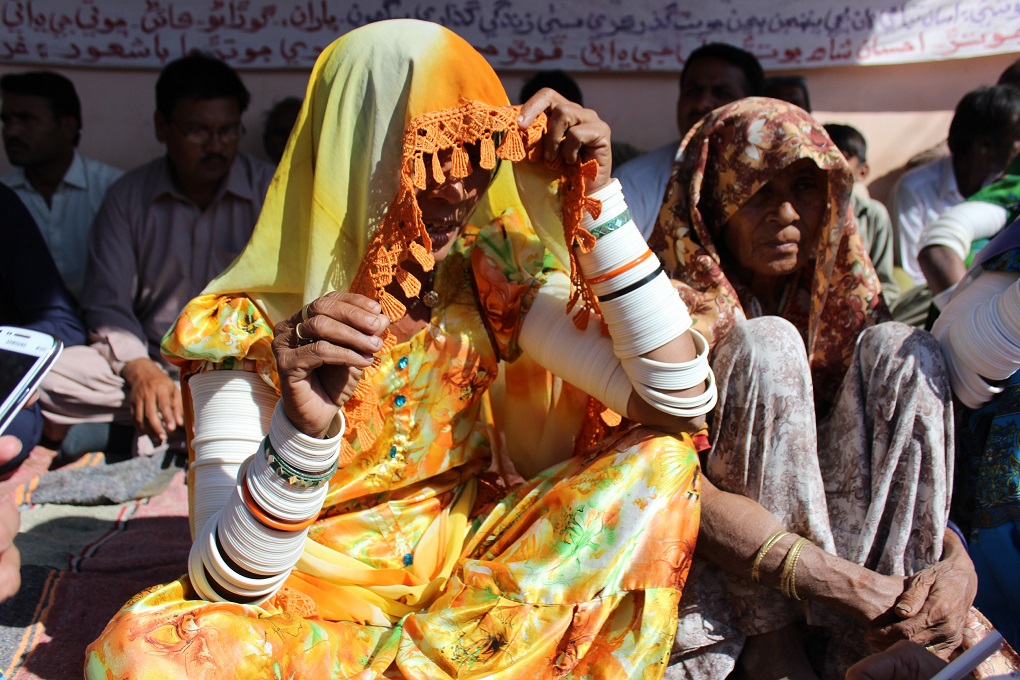 The development has brought with it new pressures on the lives of the residents, making them uncomfortable [image by: Zofeen T. Ebrahim]

While money from national and international NGOs has poured in through local legislators who receive funds from the annual budget for development, the local community felt they were not asked how or where the money should be spent. Often it led to duplication.

Leela Ram Manjiani, a resident of Gorano village, gave The Third Pole one example. “The coal company has built a brand-new primary and secondary school near the new Sehnri Dars village for the displaced. But no more than a dozen students go there.” He said the locals had requested that the coal company upgrade two existing primary schools where nearly 80 children study to secondary level. “But nobody paid attention to our pleas,” said Manjiani, who is also a lawyer. The new school is nearly 35 kilometres from the two existing primary schools, making it difficult for village children to reach it when there is no bus.

The locals also alleged that the district administration and legislators embezzled the funds received on their behalf.

“Setting up a participatory empowered forum comprising provincial and district government functionaries, civil society, elected representatives and ordinary citizens would help keep an eye on the money trail and where the money is spent,” said Vaqar Zakaria of Hagler Bailley, the firm that carried out the environmental impact assessment as well as the environmental and social impact assessment for the coal company of Block II.

Read: In Pakistan the Thar desert waits for a canal

Zakaria said “grievance redressal” for the local people was an essential responsibility of the state while a mega project is being carried out. However, the state has largely passed this responsibility to the company.

Jan Mohammad, a local socioeconomic and consultations specialist engaged by Hagler Bailley to carry out social and economic consultations on the company’s behalf, shared some insights with The Third Pole. “It was usually after I had finished my formal discussions with them that many villagers would open up. Many had never seen the kind of money they received as compensation for their land and did not know what to do with it. Some bought homes in the nearby cities of Islamkot and Mithi, put their kids in school; others just spent it all on jeeps and motorbikes. A few even got married a second time.” The state should have helped them with smart options to invest the money, he said.

“Tharis may have benefitted from the coal mining, as they were well compensated,” said Zakaria. According to a respondent from Thar Engro, “We simply deposit amount to the revenue department. Claimants submit their claims in his office and get due payments. They receive around PKR 225,000-290,000 (USD 1,350-1,740) per acre. The price is usually fixed by the government based on past transactions.” Pakistan’s per capita GDP is less than USD 1,400. 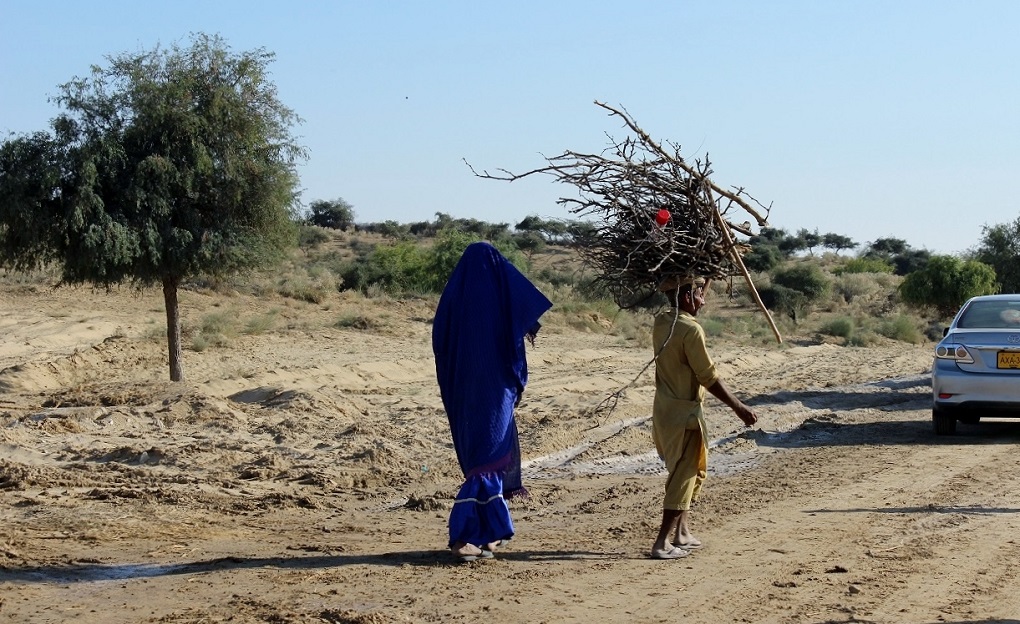 Compensation for land has brought money to an impoverished region, but it has come with other pressures [image by: Zofeen T. Ebrahim]

Nevertheless, the money, without knowing how to use it properly, combined with the new pressures on people’s lives and livelihood, has created frictions. That is why the year-long protest about the company taking over communal land to build a reservoir, 25 km from the mining site at Gorano, took such an ugly turn.

The company states the 1,400 acres of land was taken over under the Land Acquisition Act 1894, which gives the government power to take land for a public purpose. Locals say they have been displaced from communal land they have been cultivating for generations – and where they graze livestock and collect water from wells.

The state chose to brush off the opposition in a “highhanded manner”, said the report. Activists received threats and the company said it would call in the army.

In an interview with the authors of the report, IA Rehman, former secretary general of the Human Rights Commission of Pakistan, said: “Laws cannot cancel people’s rights,” and described the government’s acquisition of land in this manner as “exploitative”.

Sono Khangarani, rural development expert and a resident of Tharparkar, explained that the mining has had positive impact in the form of higher property prices and employment generation as hotels, restaurants and petrol stations have opened. These benefits, though, did not largely go to the people of Thar. “Shareholders in the project are politicians and bureaucrats,” he said.

The report also puts forward the needs of the people, which include construction of canals to transport water for agricultural purposes, laying of pipelines for drinking water, a fodder bank and protection of grazing grounds. It wants the government to set aside 2% of the project budget for the development of the community and said the government should devise a land settlement policy that is fair and equitable and protects the claims of the locals to their land.

But the report is crystal clear that work on other blocks of the Thar coal project should be stopped. An important lesson has emerged from this exercise: projects that do not have communities’ consensus should not go ahead.

Opinion: Himalayan hydropower is not a green alternative

Can the Himalayan region go green as economies flounder?