The Siachen glacier is often referred to as the world’s highest battlefield, where Indian and Pakistani troops have faced off since 1984. During the years the trash accumulated by the long deployment has slowly built up, and lies in the crevasses of the glacier, and on its surface. Porters and soldiers interviewed by thethirdpole.net said that there was no mechanism to remove it on the Indian side.

“Only soldiers return, if they are lucky, and their ammunition from Siachen. And also some dead bodies. Everything else remains there,” said Lobzang Stobzan, a senior porter who has recruited porters for Siachen since 1984 at Panamik, one of the last three villages near the Siachen Base Camp in the Karakorum Himalayas.

“How can the waste be brought back by porters? Trekking the distance between the glacier and the base camp takes four days.” 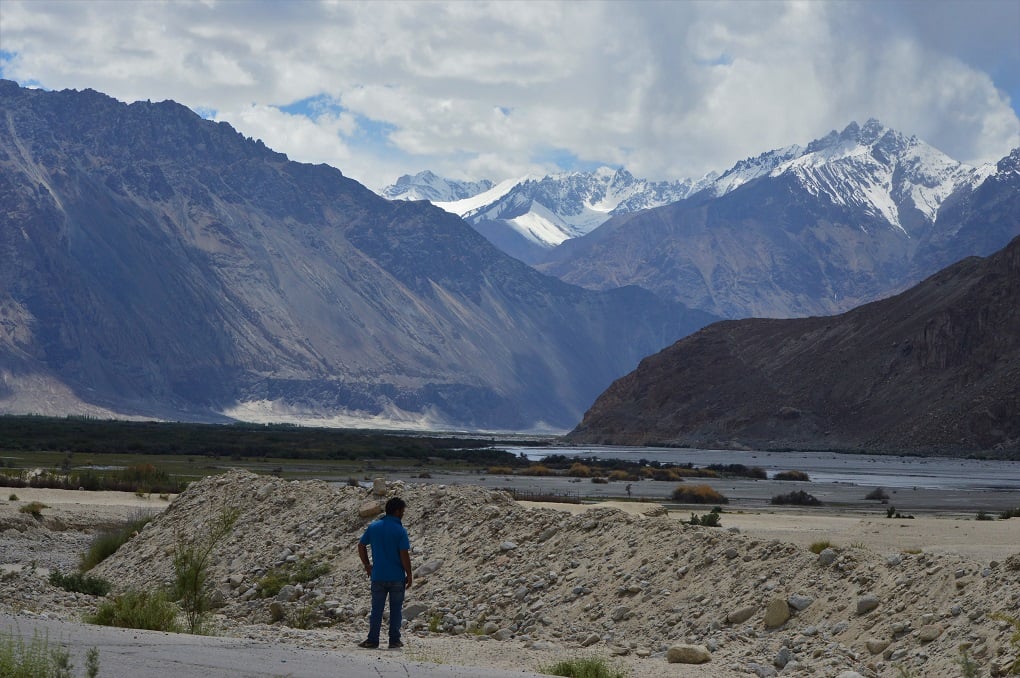 A man standing on the bank of Siachen River – also known as Nubra River – with the Karakoram mountain range seen in foreground [image by: Athar Parvaiz]

Siachen glacier and the Indian Army

Siachen, which figures among the world’s largest mountain glaciers, is on the Line of Control (LoC), which marked the ceasefire line after the 1947-48 war between the two countries in their first war. The glacier is claimed by both India and Pakistan, with a large deployment by both sides. A ceasefire has been in place since November 2003, with Indian troops stationed on the upper part of the glacier and Pakistani troops on the lower part.

Getting essential supplies to the military posts in Siachen, with some of the Indian posts over 6,700 metres high, is costing both the countries hundreds of millions of dollars. For example, from 2012 to December 2015, India spent INR 75 billion (USD 1 billion) on rations and clothing of soldiers as per official figures from the Indian government. India uses helicopters for dropping the supplies, while Pakistan, whose positions are closer to the road heads, uses porters and mules for taking the supplies to its positions.

Sonam Rigzin, 45, has been working as a porter at Siachen since 1990. A lot has changed over these years, he said.

“I think it has melted because many people walk over it and stay there,” Rigzin said.

According to Rigzin, there is “too much” pollution in the glacier as there is no way porters or soldiers can carry the trash back.

The trash, he said, includes empty cardboard boxes, metal containers, jerry cans and juice cartons. “Wherever we see the cardboard boxes, we observe more ice melting in those places. We were told by army officers that since cardboard boxes become black after absorbing moisture from ice, they trap more heat and cause fast melting,” Rigzin said.

One can see heaps of jerry cans, which are emptied after the soldiers and porters use the kerosene in them, lying in the glacier, said Thukjay Lotus, another porter who has been going to the glacier for the past 25 years. Much of the waste goes deep into the crevasses, he said.

At Siachen, the coldest combat zone in the world where temperatures can dip as low as minus 50 Celsius and annual snowfall can exceed 30 feet, kerosene is the only fuel which is used for cooking and making water from ice.

Each jerry can contains 20 litres of kerosene which implies that 10,125 jerry cans are dumped into the Siachen glacier every year on the Indian side alone. “Though the glacier is quite large, I have observed that it is melting very fast at places where trash is lying,” said Lotus.

Tamchos Zangpo, 50, a former soldier who lives in Shara village of Ladakh and has served in the army, including three postings in Siachen, said that some porters from his area have told him that the glacier has become more polluted and is melting fast.

An army officer who presently serves at Siachen glacier and spoke with thethirdpole.net on the condition of anonymity, said that there is no way the trash which has been put in the glacier so far, can be retrieved. “All the trash is going to stay there until it, and the glacier, lasts,” he said.

Residents of Panamik and adjacent villages have stopped using water coming from the Siachen glacier. “Earlier we used to get water from the Siachen (Nubra) river. Not anymore. The porters who go there for work have told us about the pollution at Siachen Glacier. It is not worth using,” said Jigmat Dorjay, a resident of Panamik.

Nordan Otzer, a social activist and writer at Nubra valley, said that while the presence of the army at Siachen and the base camp provides livelihood to some people, the “environmental costs are quite huge.” In recent years Otzer has heard many people complaining about the pollution and fast melting of the glacier. “Some years back, peace activists from India and Pakistan had demanded that Siachen should be converted into a peace park. I think that was the best idea for conserving this natural asset,” Otzer said.

According to Stobzan, the chief porter, the Siachen glacier can generate income rather than consuming money if it is declared a peace park and opened for expedition for just around 600 people annually to scale peaks in the Siala Complex and the Sonam Complex such as FLB and Perang Lungpa which have never been scaled. “This entire area is a mountaineer’s paradise,” Stobzan observed.

Death-knell for soldiers and porters

From April 1984 to December 2015 climatic conditions have cost the lives of 869 soldiers, as per official data from the government of India. On February 6, 2016, another 10 Indian soldiers were buried by an avalanche. Pakistan has also lost hundreds of soldiers for the same reason. In 2012, a massive avalanche in lower Siachen killed 140 Pakistani soldiers.

Since 1990, as many as 22 porters have also died while working in Siachen. Most of them have died due to avalanches or by falling into crevasses. The chief porter Stobzan has documented details of all the 22 porters who have died in Siachen so far. “Survivors of only one of these deceased porters have got good compensation from government of India (INR 2.4 million or USD 33,700) who died recently. We are still fighting for the compensation which survivors of the remaining 21 porters deserve,” Stobzan said.

Each of them, Stobzan said, has only got INR 16,320 (USD 230) regardless of the year they died in. Some years back, the porters have started getting the insurance due to which survivors of some deceased have also received INR 200,000 (USD 2,810).

“We are demanding that the next of kin of the remaining 21 deceased porters should also get proper compensation from the government of India. The army officers assure us that it will be done. But they keep getting transferred frequently due to which the process is being prolonged,” Stobzan said.

Military experts and peace activists have consistently questioned the strategic and economic significance of the Siachen glacier ‒ saying it does not justify the toll it exacts in men and money. Stephen Cohen of the Brookings Institute famously described it as “two bald men fighting for a comb.”

According to Pinto Narbo, a former minister in the Jammu and Kashmir government and former member for the Nubra assembly constituency, said it is “ridiculous” to think that Siachen is a guardian post for India.

“If you recall, whenever Pakistan created trouble for us, it was from lowest passes. All the infiltration was from the lowest passes such as Turtuk in Nubra valley and Battalik in Kargil. Nobody can think attacking from over 19,000 to 22,000 feet high passes. It is ridiculous to believe so,” Narbo said.

The amount of money being spent for occupying these heights is mind-boggling, he added. “Six crores (INR 60 million/USD 843,180) rupees are spent every day. It is mind-boggling and mind-numbing.”

“And look at the environmental costs! When I visited Siachen Glacier in 1996 along with the then chief minister of Jammu and Kashmir, Farooq Abdullah (by helicopter), the Brigade Commander at Siachen told us that the refuse being thrown into the crevices in barrels is enormous. If God forbid, he said, the crevices move and the barrels break, the amount of waste which will go into the river will be of such proportion that Pakistan will almost get drowned in waste,” Narbo said.

When 'jetsetting' is no longer cool