The New Development Bank is the Brics bank, born of the group of so-called ‘emerging’ economies — Brazil, Russia, India and China, and later South Africa — that this week celebrates its 10th anniversary in Brasília.

When it was created in 2014, the New Development Bank (NDB) harboured dreams of finally breaking the hegemony of financing structures created by developed countries and embodied by the International Monetary Fund (IMF) and World Bank.

The NDB was to be by and for the developing world. The bank would excel at innovation and transparency like no other. It pledged to favour sustainable projects above any others.

Yet, so far the only members are its founders; observers find its criteria for choosing investments vague; and even controversial Amazon road paving can get the NDB’s ‘sustainable’ stamp.

More to the point, few people even really know of the ND – so what happened?

Why was the BRICS Bank created?

The NDB was initially India’s idea, which it shared with other Brics members in 2012. After two years of negotiations, the bank was created at the 2014 Brics summit in Fortaleza, Brazil.

By that time, the Brics had become much more than a group of countries with a convenient and catchy acronym.

Brics was the most important group of developing nations in the world because it involved five massive emerging countries with some of the world’s largest populations, land masses and economies.

Although it’s questionable whether South Africa falls into these categories, it is one of Africa’s biggest economies.

The bank aimed to solve developing nations need for money to build infrastructure and develop their economies at a time when there was not enough credit around, according to Paulo Nogueira Batista Jr., the first Brazilian director of the NDB.

As Nogueira wrote in his book Brazil doesn’t fit in anyone’s backyard, the idea of the NDB was bold: to create a development bank that would challenge the global development finance architecture that developed countries created in the aftermath of the Second World War, known as the Bretton Woods system.

Crucially, it would also learn from all the mistakes they made.

“We decided to pave our own way. We would never have done this if these institutions were more malleable,” Nogueira told Diálogo Chino, in reference to the Bretton Woods.

Brics launched the bank a few years after openly expressing their discontent with the IMF’s choice of yet another European leader in Chrstine Lagarde. As they launched the NDB in 2014, the Brics were clear in criticising the IMF for not implementing reform that would give developing nations more decision-making power.

“We remain disappointed and seriously concerned with the current non-implementation of the 2010 International Monetary Fund reforms, which negatively impacts the IMF’s legitimacy, credibility and effectiveness,” their statement said.

Developed countries were welcome to join the NDB, but they couldn’t borrow from it or having voting powers that exceeded 20%.

Back in 2014, these ideas were very powerful and some more radical observers thought the NDB could challenge the World Bank’s power, and even the hegemony of the US dollar.

What has the New Development Bank achieved?

First of all, the fact that the NDB exists is no small feat for a group of nations that are very different and geographically distant. Dozens of nations want to become members of the bank — although none have yet joined.

“As a development bank, its impact isn’t trivial,” said Paulo Esteves, director of the Brics Policy Center. “We are talking about financing to countries that didn’t have credit lines until then, and this bottleneck has been solved, by this and other banks.”

The NDB has also managed to innovate in some areas, such as lending in local currencies to protect borrowing countries from a stronger dollar, which was one of its founding features.

Another innovation is that the bank accepts parametres for compliance with environmental and social standards designed by borrowers, respecting its members’ own policies.

“This impact is important, for better or worse,” said Esteves, explaining that while this means resources are easier to access, it can also mean that the social and environmental standards in projects the NDB supports can be very low.

The bank has successfully installed its first regional centre in South Africa, and should open another in São Paulo by the end of the year. It has established partnerships with important development banks, such as Latin American regional development bank CAF, the China-led Asian Infrastructure Investment Bank, and the World Bank group.

The NDB’s credit rating is AA+, one short of the maximum, which other development banks such as AIIB have. This is despite many of its members, notably Brazil and South Africa, facing tough economic times domestically.

The bank has successfully emitted a number of bonds — including ‘green bonds’ in 2016 —  and has now approved 42 projects in member countries for a total of over USD 12 billion, more than the AIIB’s roughly USD 8 billion portfolio. 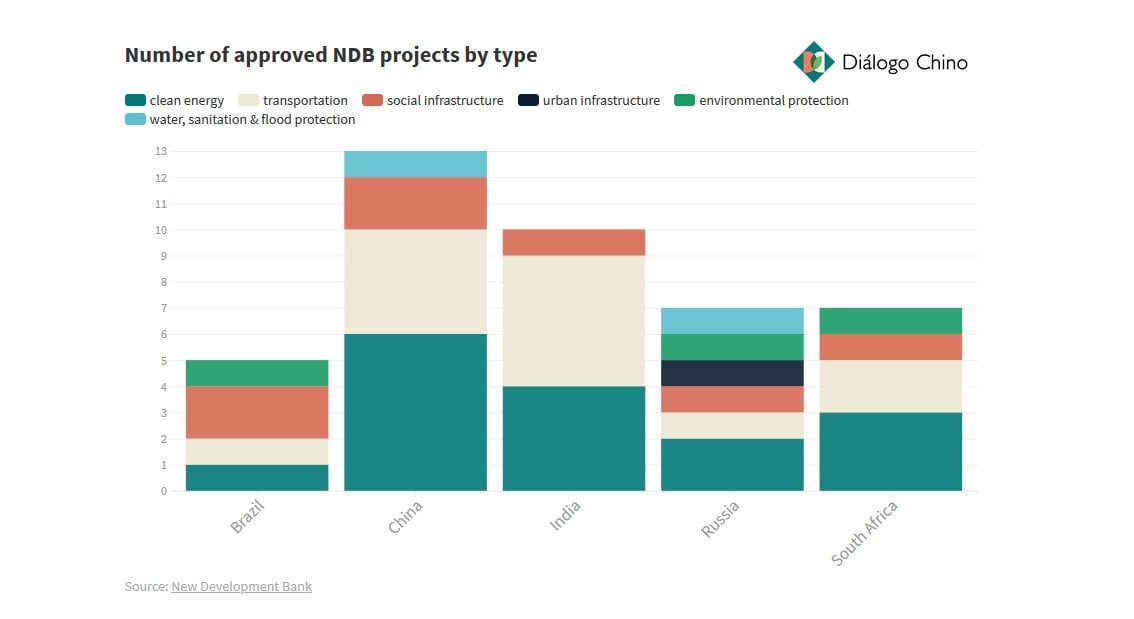 What’s wrong with it?

Perhaps its initial boldness has led many people watching the Brics to be disappointed by the NDB’s limited achievements so far, especially in terms of attracting new members and raising its international profile.

To name a prominent one, Jim O’Neill, the Goldman Sachs executive who coined the term Bric (before South Africa joined), told a South African newspaper the bank has been “quite disappointing so far — almost anonymous.”

Nogueira points out that, though the bank has approved over USD 12 billion in loans, it has disbursed less than USD 1 billion so far, a figure he considers low.

He also says the bank lacks good governance. Most people picked to start the bank weren’t completely prepared for some of the challenges ahead, he says. He includes himself.

Political turmoil in and between member countries didn’t help either. Relations between China and India soured, sanctions against Russia made it difficult to lend to Russian companies, and then there was political instability and economic crises in both South Africa and Brazil.

Continuing to advance the interests of the developing world in a rough political climate proved to be a hard task at which member countries don’t seem to have excelled, according to critics.

The bank has also been accused of erring in some of the same areas as the traditional institutions they criticise, by lacking basic transparency in its projects, for example.

Sustainability has also been a fraught issue. Though the NDB has recently approved loans for climate change mitigation and adaptation in Brazil and renewable energy in India, it has labelled a number of projects that are environmentally questionable as sustainable, without explaining the criteria it uses.

One of its sustainable projects is the paving of the Trans-Amazonian highway in Brazil, a highly controversial road that many environmentalists blame for exacerbating deforestation in the world’s largest tropical rainforest.

The highway project is mostly supported by Brazilian agribusiness, which is expanding into the Amazon, a phenomenon that has so far had enormous environmental repercussions.

The short answer is yes. The bank is very young and will enter a new cycle in 2020 when current president, India’s K. V. Kamath, steps down.

“The problem with people who think the NDB is a failure is that maybe they expected too much,” says Esteves.

Whether or not member countries still value the Brics and its bank as much as they did when it was created is uncertain. Brazil, for one, has a new government led by climate-sceptics, who favour a relationship with the US, and are fierce critics of globalisation and multilateralism, which China now promotes.

Yet China still deeply values the Brics. In June, when Brics leaders met during the G20 Summit in Japan, President Xi Jinping called on Brics member countries to  enhance their “strategic partnership.”

Despite all the problems Nogueira witnessed first-hand, he is still an NDB believer. The need for the NDB in a world where developing nations still lack basic infrastructure is stark, he says.

And there is time for it to prosper. Nogueira remembers one of the main lessons he learned from the Chinese was to have what he calls “strategic patience”.

“To me, it was difficult. As a Brazilian, I’m impatient,” he said, laughing. “But we need to have a strategic vision. Things happen little by little.”

Also see: Is the BRICS Bank tooled for sustainable development?

This article was first published in Dialogo Chino where Manuela Andreoni is the Latin America editor.

Managing glaciers along CPEC in Gilgit-Baltistan