India and Bangladesh recently signed the second addendum to the Protocol of Inland Water Transit and Trade (PIWTT) at the end of May, a step welcomed by traders in both countries. The agreement adds an additional route between Sonamura, in India’s Tripura state, and Daudkandi in Bangladesh to the existing eight protocol routes – along which vessels can travel across international borders. It also declares Jogigopha in India’s Assam state and Bahadurabad, Bangladesh, as new ports of call along the Kolkata-Silghat and Karimganj-Silghat routes.

With 54 shared rivers, India and Bangladesh have significant possibilities to harness the trade and economic benefits of inland waterways. The extension of the routes and new ports should open up the waterways to smaller traders, bringing agricultural goods and other materials between Bangladesh and India’s landlocked northeastern states. 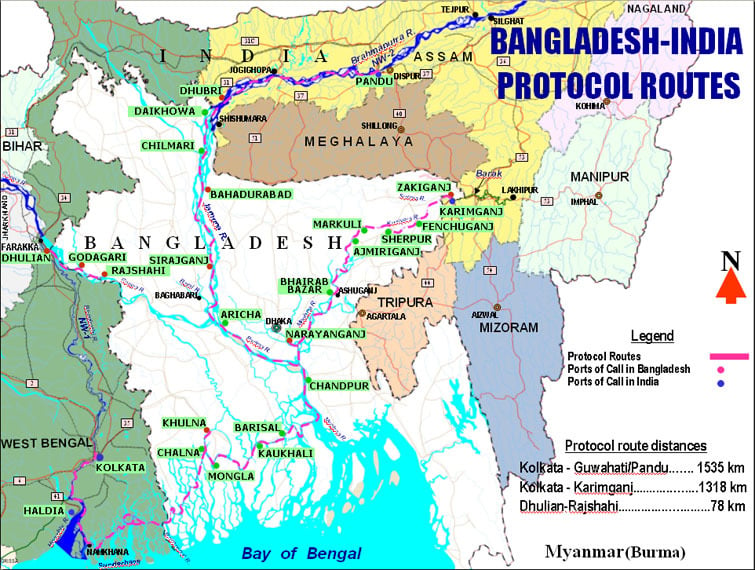 Cross-border river trade between the two countries is governed by the PIWTT, first signed in 1972. The subsequent addendums in 2018 and 2020 have included new ports of call and routes. During 2018-19 India exported about 2.4 million tonnes of cargo to Bangladesh through Protocol Routes. Out of this, 97% is comprised of fly ash – toxic residue left over from burning coal – and the rest included steel cargo, steel coil/rail and stone chips.

Shipping goods by river can save time and money. Since Dhubri became a port of call in 2018 along the Kolkata-Silghat protocol route, waterways have become a preferred route for boulder exporters from Bhutan to Bangladesh.

“The opening of trade route via waterways between Dhubri, India and Chilmari, Bangladesh saves us about INR 700 per tonne (USD 9),” said Atowar Rahman, a stone trader based in Dhubri, Assam while speaking to researchers at CUTS International during field research on transboundary waterways. Rahman has been exporting boulders to Bangladesh since 2014 through Golakganj near Dhubri. Procedural delays at the border post, poor road conditions, load restrictions and delays add to the cost of doing trade via the land route.

Others are now eager to trade boulders, stones and other non-perishable commodities via the region’s vast waterways. There is a downside. The new business opportunities have encouraged people to collect boulders, mostly by dredging rivers and banks. Weak enforcement of regulations in this regard has led to indiscriminate mining with an expected impact on river ecosystem in the long term.

Traders and export associations in Bhutan and Assam voiced their demand to declare Jogigopha as a port of call during the field research conducted by CUTS International. These discussions were conducted as part of a project on Inclusive Spaces for Trans-boundary Trade via Waterways and Ease of Doing Business under a regional programme called Trans-boundary Rivers of South Asia (TROSA), which is managed by Oxfam and supported by the government of Sweden.

Traders in Bhutan hoped the port in Jogigopha would improve trade and cargo-handling facilities. Jogigopha is already an identified site for the development of a multi-modal terminal in Assam with national highway and broad-gauge railway connections, which run adjacent to the terminal location.

The current road connecting the highway to Dhubri terminal is narrow and congested. Also, the river pilots say the main channel no longer reaches the port due to extreme siltation. In contrast, the Jogigopha terminal is located on the right of the main navigable channel and has good depth condition.

The shallow waters of the Brahmaputra river along protocol routes 1 and 2 (Kolkata-Silghat and back) have so far prevented the movement of large barges in Bangladesh, especially during winter months, as they need good navigable depth after loading cargo.

Healthy river ecosystems are critical to maintain channel depth and navigability. Trade dialogues and decisions on waterways need to acknowledge these ecological dimensions and integrate them in formal trade discussions. This will help make the cross-border and regional trade practices and business investments, including infrastructure development, more environmentally sound and responsible.

The decision to allow shallow draft mechanised vessels along protocol routes has opened up several opportunities for small players. Waste from cotton and other textiles from Bangladesh is used widely in Assam and other northeastern Indian states to produce mattresses and blankets. Currently the cotton waste is imported via land through Mahendraganj (Meghalaya) and Mankachar (Assam). This involves loading/unloading at several locations, adding to the cost of transportation significantly.

The cotton waste importers in Dhubri have asked whether empty barges coming to carry stones from Dhubri can bring cotton waste on their onward journey. Such opportunities need to be further explored so that cross-border trade via waterways becomes more profitable.

How locals can benefit

Apart from traders and exporters, CUTS researchers talked with producer communities and women’s groups in Dhubri, South Salmara-Mankachar districts of Assam and adjoining areas of the Garo Hills in Meghalaya. The idea was to explore the prospects of using waterways for local as well as cross-border trade.

For instance, cashew, areca nut, ginger and pineapples are produced in plenty in the Garo Hills. Among them, ginger and areca nut are exported to Bangladesh via Mankachar. Women in the hills and in the char (riverine islands) areas are involved in the value chains of these agricultural products, mostly in processing.

At present, there are no business links with cashew traders in Bangladesh. For export purposes the raw material has to be procured in bulk for processing, which will, in turn, provide more employment opportunities to local women.

Similarly, Rowmari and Chilmari are two upazillas (sub-divisions) in Kurigram district of Bangladesh, close to the Indian border. The land is very fertile and people in these areas grow rice, ground nut, maize, potato, pulses and tobacco. Most of these products are sold locally and no one has explored the potential to sell on the Indian side yet. A major limitation to cross-border trade is low volume of production and lack of suitable vessels to ply the protocol routes.

With increased opportunities for cross-border trade of these products, there is also need for new avenues to strengthen women’s involvement and initiatives to promote responsible value chains. Lessons from other regional initiatives on women’s economic empowerment – such as the International Women’s Development Agency-led Do No Harm Research Project in the Pacific and Oxfam’s Gender Transformative & Responsible Business Investment in South East Asia (GRAISEA) – could inform some of these initiatives.

As the production of agricultural commodities is seasonal and of low volume, bulk transportation may not be feasible. One way to overcome this is to have compartments of varying capacities on boats so they can carry multiple commodities. Boats engaged in transboundary trade should also have a valid registration certificates showing details of the owner, valid survey certificates, competency certificates for the vessel master and driver, and identity cards for the crew members duly certified by the protocol authorities.

Hatsinghimari Ghat, which is situated halfway between Dhubri and Chilmari, is an ideal place for loading agricultural commodities being produced in the Garo Hills and nearby areas. For customs clearance the vessel will have to go to Dhubri, about four-five hours upstream.

Thus, Hatsinghimari Ghat can be considered as an ‘extended port of call’ for loading cargo under the existing provisions of the protocol and necessary customs formalities can be undertaken there as well.

Linking people and markets across borders

Along with declaring more strategic locations along the India-Bangladesh transboundary waterways as port of calls including extended port of calls, market linkages have to be established across the border.

In order to provide further momentum, CUTS, along with its local partners, has been organising traders’ meetings involving potential exporters and importers from India and Bangladesh and nodi boithak (river meetings) to establish better linkages between traders and local communities/producers. These community-led discussions have provided opportunities for small-scale traders and other small and medium-sized enterprises to share their aspirations and raise their voices for meaningful engagement in such inland water trade decisions.

Organising weekly markets in the mode of India-Bangladesh border haats has also emerged as a major demand to reestablish socio-cultural connections among the people living on the islets of the Brahmaputra river.

Realising these recommendations through appropriate policy and regulatory mechanisms, including cross-border multi-stakeholder dialogues, will benefit not only marginalised communities but micro and small enterprises at the local level, thereby boosting the local economy.

Why are bees dying en masse in Bhutan?