At the start of December 2020, 13.75% of Covid-19 tests were positive in Lahaul and Spiti. The remote tribal district had one of the highest infection rates in the north Indian state of Himachal Pradesh.

On October 3, as the pandemic intensified across India, Prime Minister Narendra Modi inaugurated the Atal Rohtang Tunnel, enabling year-round movement of people and goods between the neighbouring district of Kullu and Lahaul valley. In the following weeks, Covid-19 cases flared up in many villages.

Active cases in Lahaul and Spiti rose from 66 on October 1 to 455 on November 20. The district, which lacks adequate health infrastructure and quarantine facilities, seemed to be on the brink of tragedy.

And yet, as of January 20 there have been just 12 deaths from Covid-19 in Lahaul and Spiti since October 3 – and none recorded prior to the opening of the tunnel. More than 950 people have died across the state due to the disease.

The people of Lahaul and Spiti are from Scheduled Tribes, meaning they have special rights under India’s Constitution because they belong to historically disadvantaged groups. While the district’s population of 31,528 is by far the smallest and lowest density of all the districts in Himachal Pradesh, its low death toll indicates the success of preventative measures taken early in the pandemic.

Covid-19 and the community

The opening of the tunnel, combined with social and religious gatherings, led to a surge in Covid-19 cases. In response, officials established a mobile health clinic to test villagers for the virus. The medical team initially encountered some resistance from communities, stemming from misconceptions about the virus. To promote awareness, the authorities recorded sessions educating communities about Covid-19, which they promoted on social media and local news sites.

At the height of the outbreak, the overburdened four-person medical team collected 120-150 samples per day in temperatures below freezing.

“We were working in very stressful conditions. There was no option but to perform multiple roles. In the Chandra valley of Lahaul, where the most cases were reported, we collected samples late into the night using the light from the ambulance,”  a young medical officer told The Third Pole. Samples had to be sent nearly 200 kilometres for testing, to the nearest lab in the neighbouring district of Mandi.

With cases under control and India rolling out its vaccination programme, the mobile health clinic’s focus now is vaccinating people.

But managing Covid-19 would not have been possible without the voluntary efforts of Young Drukpa Association (YDA) Garsha, a youth group.

“The valley’s public health infrastructure remains in shambles. Knowing the state of affairs, we had to take the situation in our hands and offer the best possible service to the community we could,” Sonam Zangpo, president of YDA Garsha, told The Third Pole.

Back in April, YDA volunteers started to monitor and sanitise every vehicle entering Lahaul through the Manali-Leh road. They provided safety gear to sanitisation workers and food to migrant labourers. And they distributed disinfectant to gram panchayats (village councils) while raising awareness of the disease among the community. 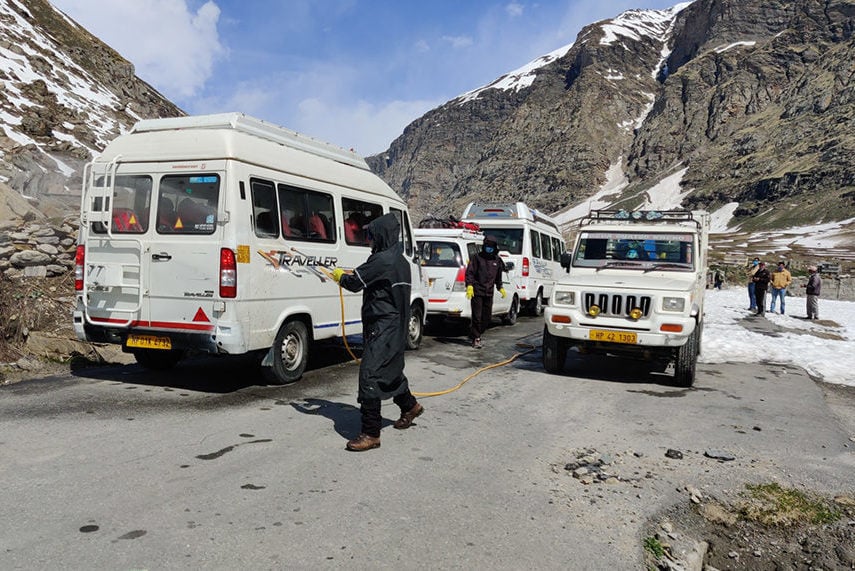 Throughout April and May, YDA volunteers sanitised every vehicle entering Lahaul valley through the Manali-Leh highway [Image by: YDA, Garsha] 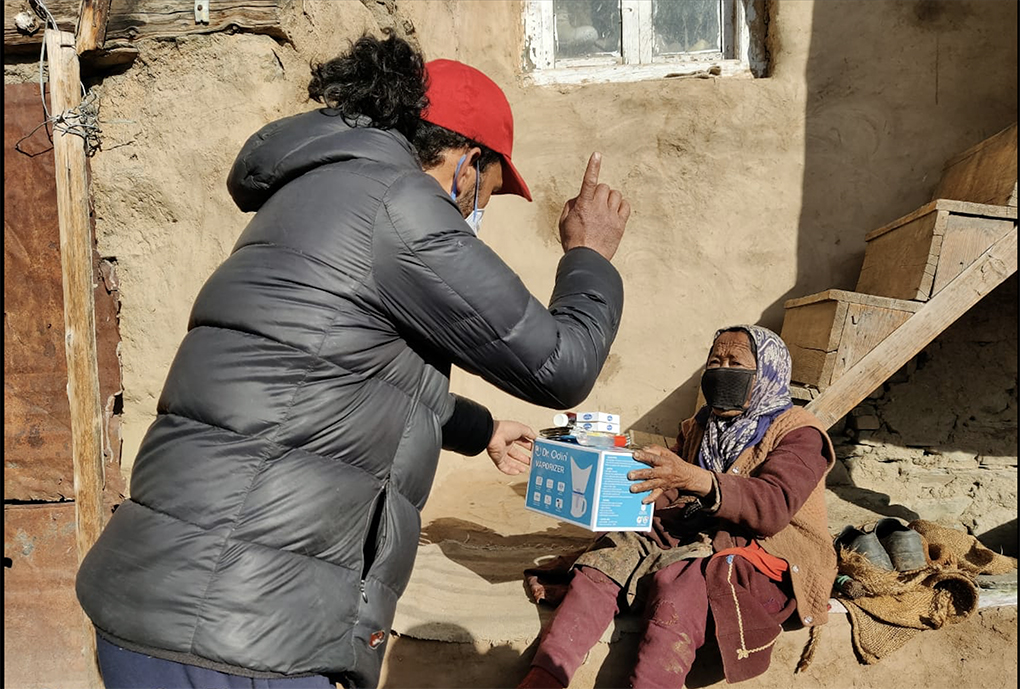 A resident receives a medical kit from a YDA volunteer [Image by: YDA, Garsha]

In appreciation of the group’s work, residents started a fundraising campaign. The money enabled YDA to distribute Covid-19 kits containing an oximeter (a device to measure heart rate and oxygen levels), a steam inhaler to help with breathing, masks, hand sanitiser, zinc and other vitamin supplements. YDA’s service continues to reach the most remote households in the valley despite the harsh winter.

A third, equally crucial, role was played by the mahila mandals (women’s support groups) of Lahaul and Spiti. Early last year, before the sowing season, the panchayats and mahila mandals collectively decided not to bring in migrant farm labourers. They chose to focus on growing enough to sustain themselves, rather than having produce to sell – though this meant significant economic loss.

Suman Thakur, pradhan (head of the village council) of Sissu, a village in Lahaul, said, “The families, especially women, made the conscious decision to not overwork this season in the absence of labourers. By collectively deciding not to permit the workers this year, women placed their families’ and the valley’s well-being before money.”

In addition, in November, before community transmission had gripped the district, mahila mandals were closely monitoring the movement of non-locals into the valley. As the situation deteriorated, panchayats near the tunnel started to ban tourism activities, putting pressure on the local administrators who eventually took similar action. 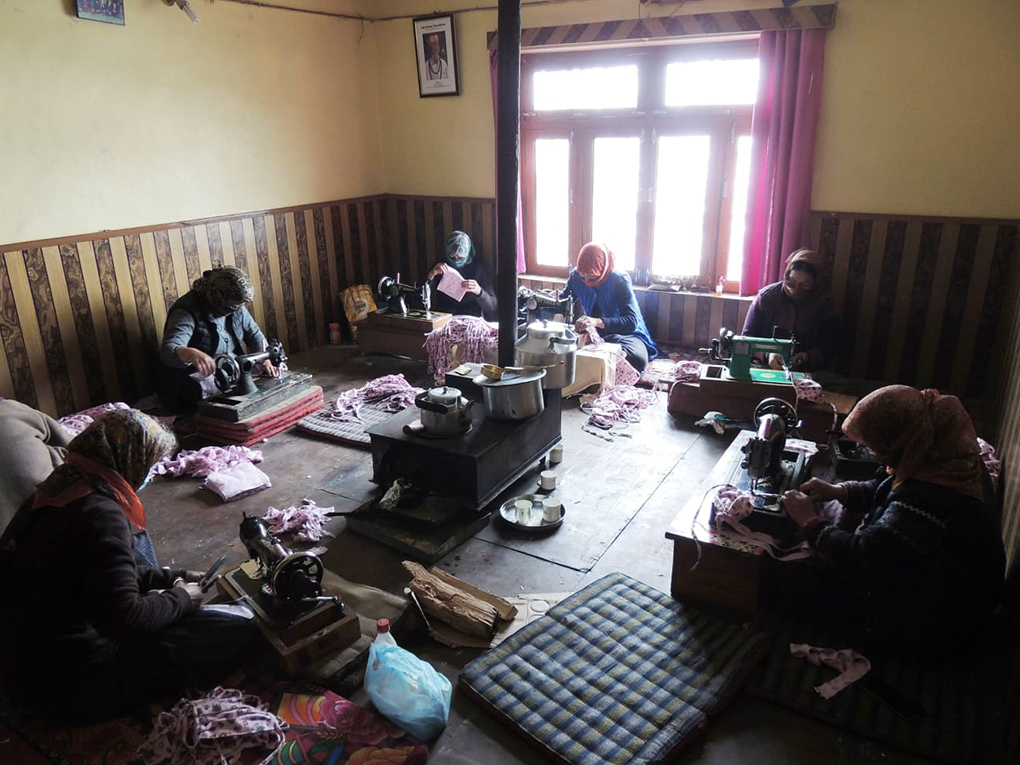 Members of a women’s self help group in Keylong stitch masks to be distributed in the community [Image by: Rahul Rohel]

While the collective efforts of the community buffered the devastating effects of Covid-19, the pandemic exposed the dire state of public health infrastructure in the district. At the height of the crisis in November, critically ill patients had to seek treatment from already overburdened public services in the neighbouring districts of Kullu and Mandi.

But even in other winters, a patient being transported on improvised stretchers to the nearest helipad is a common sight. Heavy snowfall means routes to health centres are blocked and people often must be airlifted.

Officially, there are seven positions for specialist doctors, including gynaecologist, anaesthetist and surgeon, in the Regional Hospital at Keylong (Lahaul and Spiti’s administrative headquarters), according to a memorandum submitted to the Himachal Pradesh chief minister. None of these positions have been filled. There are eight posts for dentists, of which only one has been appointed. There are no lab technicians, or ultrasound and blood bank facilities.

Zangpo, of YDA Garsha, deplored the state of healthcare in the district, pointing out that “overall, Lahaul is performing very well on several indicators, be it education, agriculture, horticulture and now tourism.” Lahaul and Spiti has the third-highest per capita income in Himachal Pradesh, yet lacks basic healthcare.

Savita, a Lahaul resident, recounted her own experience to The Third Pole. Two years ago, she fell ill during the winter and had to be airlifted, along with three pregnant women from different parts of the valley. Expecting mothers suffer particularly from the lack of healthcare; even today a pregnant woman’s death is talked of as an incident of ‘fate’, and the recurring maternal mortalities have been protested by students.

Another challenge is the delayed arrival in the winter of the state government’s helicopter that provides free transport in medical emergencies. The service is affected not only by the weather conditions, but also because the chief minister of Himachal Pradesh uses the helicopter for official tours.

It is hoped that the Rohtang Tunnel, with its promise of year-round access, will improve remote communities’ access to emergency healthcare. 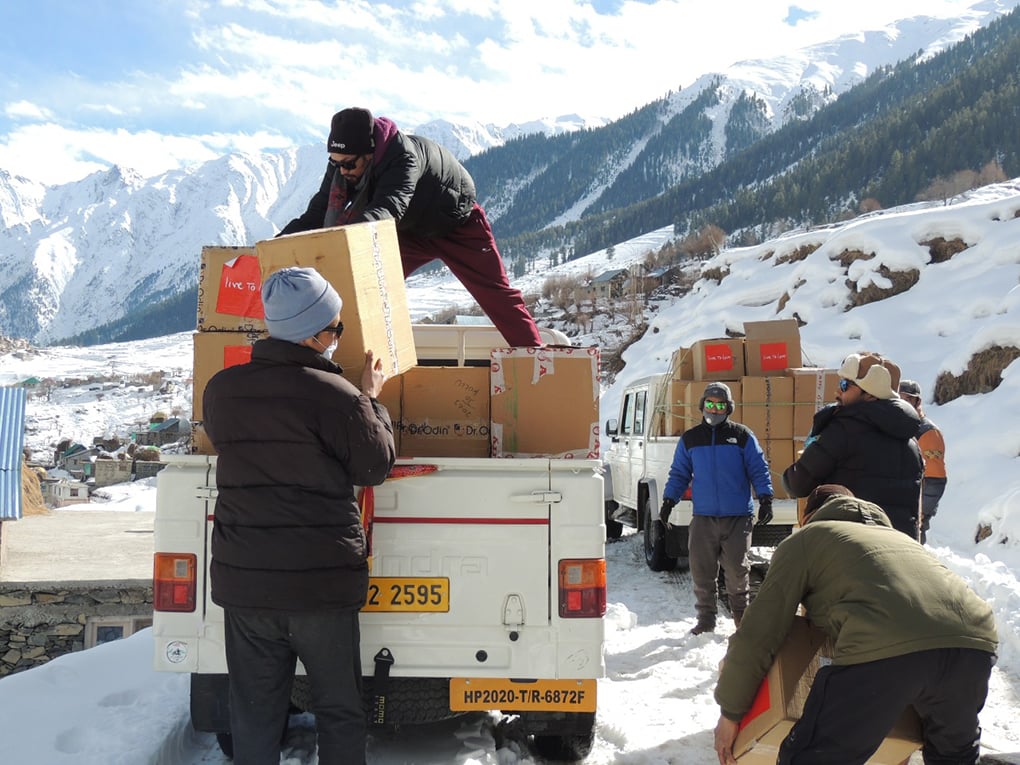 “How can any community prosper without basic health facilities in place?” asked Mangal Chand from Gemur village. He predicted that a rise in tourism brought by the Rohtang Tunnel will soon lead to demand for robust health services. “The government is now thinking of promoting winter tourism. Are we also ready to address the medical needs of the tourists? There will be many untoward incidents.” Eight years ago, Chand’s young daughter had to be airlifted out of the district in the middle of winter, suffering from severe stomach ache and fever.

While active cases have fallen, the threat of Covid-19 transmission within the community continues to lurk, with the tunnel, the new landmark of the Himalayas, continuing to attract visitors. On December 27, close to 5,500 vehicles passed through the tunnel – the highest since it opened.

Can the Himalayan region go green as economies flounder?