Central Asia is warming faster than the global average. Melting of the region’s glaciers ­– a vital source of water for households, agriculture and energy production – is also accelerating, with implications for Central Asia’s river systems and long-term water availability. These impacts will be compounded by changes in rainfall patterns, evaporation and water demand.

Managing these problems is complex in a region where river basins and water stores straddle multiple borders. Although a number of transboundary agreements are in place for water management and conservation, in the Aral Sea basin for example, these are generally regarded as ineffective.

The Third Pole spoke with World Bank experts working in Central Asia – William Young, John Bryant Collier, Daniel Kull, and Jane Ebinger – about the impacts of climate change on water in Central Asia, and what must be done to limit the negative consequences for people, agriculture and nature across the region.

However, the responsibility for slowing climate change-driven water shortages is not just a regional issue, they said. Tackling the root of the problem requires global action to slash emissions and slow global temperature rise. 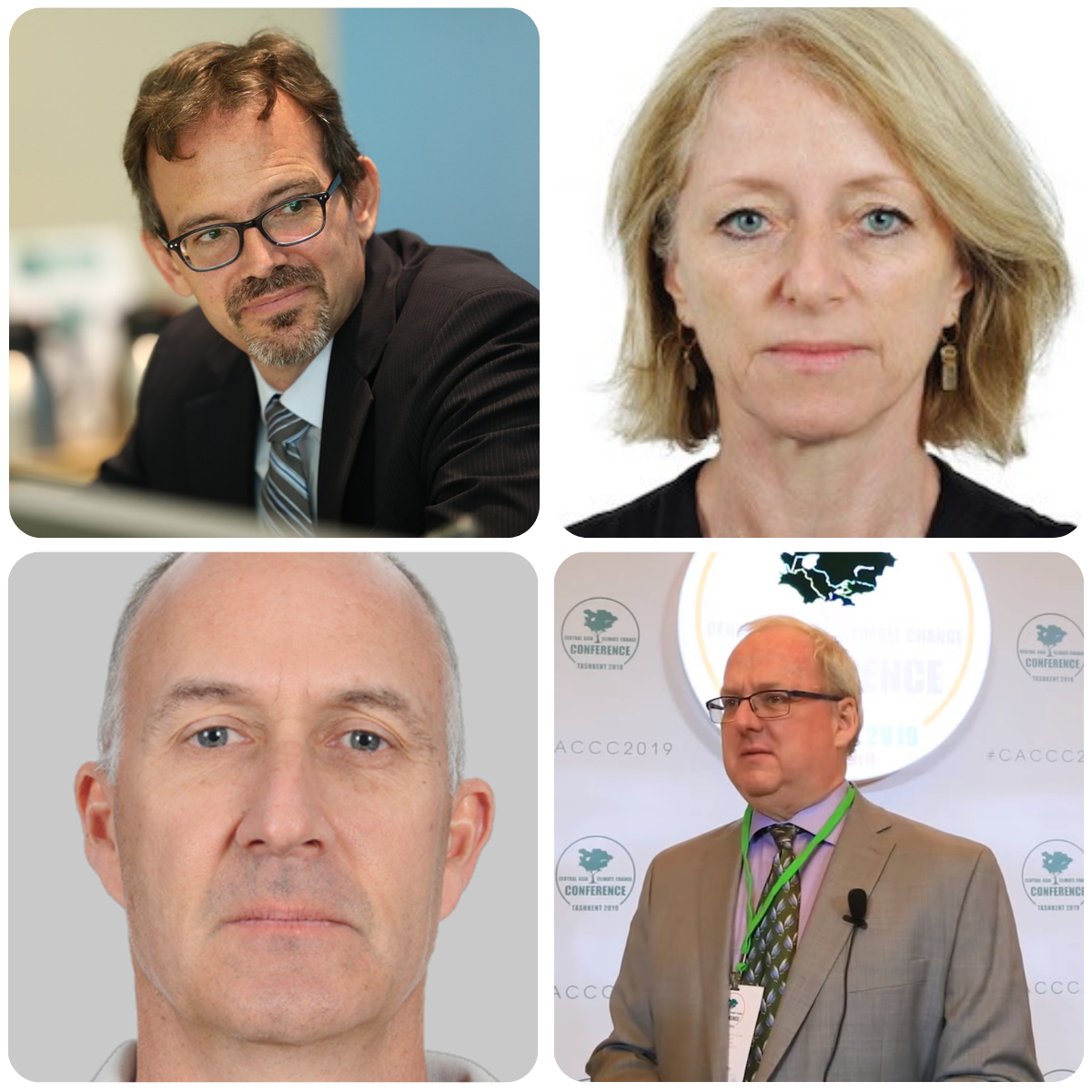 The Third Pole: How can Central Asia tackle the problem of melting glaciers?

The World Bank: Glacier melting is a natural process: snow accumulates in the basin above a glacier and adds ice mass. Glaciers flow slowly downhill, and the ice melts at lower and warmer elevations.

Yet, the climate is warming. Not only is it warming faster in Central Asia than the global average, it is becoming warmer faster at higher elevations. Therefore, ice is melting faster and is melting at higher elevations, meaning that in spite of the addition of some new ice from snow accretion, overall glaciers in the region are losing ice and shrinking. Shrinkage occurs by retreat or by thinning – or both.

Worse, industrial pollution and, in the case of Central Asia, windborne dust from the dried bed of the Aral Sea, falls on the surface of glaciers and decreases their reflectiveness, causing them to absorb more energy from the sun. This further accelerates the melting.

The only way to slow or prevent accelerated glacier melting is to slow or reverse climate warming. And the main way to do this is to reduce greenhouse gas emissions, and to remove greenhouse gases that are already in the atmosphere. Most current climate action is focused on the first of these approaches, although there is some progress with so-called ‘carbon capture and storage’ technologies.

The best hope of saving the glaciers of Central Asia is concerted global action on decarbonising economies.

What are some of the likely impacts of climate change on water in Central Asia?

There are many uncertainties in Central Asia’s water future. There may be some short-term gains in some places and for some communities due to increased water availability as glaciers recede. Possible increases in rainfall may generate greater runoff, at least in the upper parts of some river basins. Yet, over the longer term and especially in the lowlands, as aridification accelerates, the scenarios will be overwhelmingly negative in terms of more frequent and more damaging floods and mudflows, and in terms of increasing water pollution.

The consequences of these changes will be many – direct and indirect, some quite predictable, and others probably quite unexpected. There will be negative environmental consequences that will impact biodiversity and undermine important ecosystem processes (such as carbon sequestration in the landscape and mitigation of flood events) that contribute to landscape resilience.

Central Asia could see as many as 2.4 million climate migrants by 2050

There will also be negative social consequences in terms of clean and reliable water supplies and sanitation services for rural and urban households. Unless, that is, we increase efforts to mitigate climate impacts.

Without adaptation there will be negative economic implications due to changes in water supply and demand, especially in agriculture. In most countries in Central Asia, agriculture is highly dependent on irrigation. Irrigation in the region is very vulnerable to climate change, and investments in both institutional strengthening and infrastructure modernisation are required to build resilience. In areas where rainfed agriculture dominates, such as northern Kazakhstan, vulnerability to climate change-driven increase in drought frequency and severity is even greater.

Responding to climate change and mitigating the worst impacts will require improved monitoring of the environment, water resources and agricultural production, and using this information to guide changes in policy.

What is the current status of transboundary water cooperation in the region?

The focus of transboundary water cooperation in Central Asia has historically been, and still is, on the Aral Sea basin and its major rivers, the Amu Darya and Syr Darya. The focus, therefore, has primarily been on the relationships amongst the post-Soviet states of the region, as well as with Afghanistan to the south, and to a very limited degree Iran. But Kazakhstan also shares rivers with the Kyrgyz Republic, outside the Aral Sea basin, and river basins with China to the east and Russia to the north. All of these are subject to different transboundary agreements.

Similarly, Turkmenistan, while mostly within the Amu Darya basin, also shares other rivers (with limited water resources) with Iran to the south that either terminate in the desert or the Caspian Sea. These are not covered by any formal transboundary agreements.

While Tajikistan, Turkmenistan and Uzbekistan all share borders with Afghanistan along the Amu Darya River or its tributaries, Afghanistan is not part of the Soviet legacy of water management in the Aral Sea basin and is excluded from the regional water management agreements.

However, even where the Aral Sea basin is concerned, it is widely accepted that while there is reasonable stability in some aspects of transboundary water cooperation in the region – in water allocation agreements and the key regional institutions – as a whole it is neither fully effective nor efficient. Not all countries in the region view the current water sharing arrangements as equitable or optimal and the capacity of regional institutions and the financing of these institutions are both inadequate.

On the positive side, the broad agreement on these deficiencies means that regional institutions and all their member states have committed to well-structured consultation processes to identify opportunities for institutional reform and strengthening. The World Bank and other development partners are actively supporting these reform efforts.

Secondly, the warming climate is not the sole factor behind growing demand for water. Population growth and economic development also increase water demand. There are, of course, efforts aimed at improving the efficiency of water use, so as to reduce the overall water demand in the region, or at least to reduce the rate of the increase in demand.

In the short term, glacial melt will increase river flow and water availability, at least in the upper reaches of the major rivers. But contrary to common belief, glacial meltwater makes only a small contribution to the total river flow in Central Asia, and temperature-driven water loss in the lowlands will not be compensated by meltwater increases.

While future precipitation is highly uncertain, it is clear that the variability of rainfall, river flow and water availability will increase, and their seasonal timing will shift. The accelerated shrinkage of glaciers, in the long term, reduces landscape water storage that is important for regulating river flows. As there are now, there will be transboundary complexities to managing these shortages. Managing shortages involves managing both supply and demand. We can manage supply by increasing storage – both constructed storage (reservoirs) and natural storage (lakes, wetlands and groundwater). We can manage demand through efficiency improvements and a range of incentives – the sticks and carrots of regulation and economic instruments, respectively. 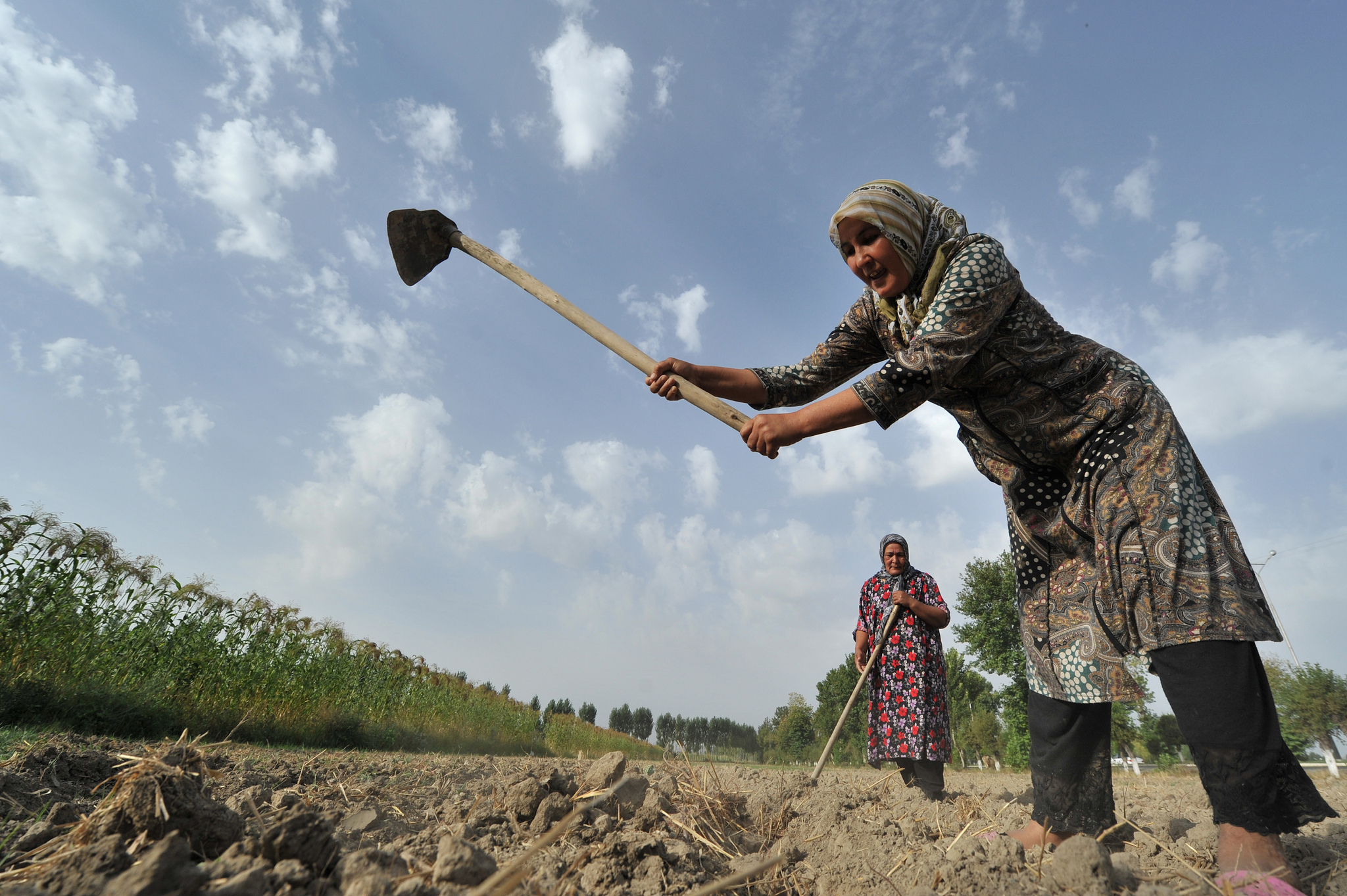 In areas of Central Asia where rainfed agriculture dominates, such as northern Kazakhstan, vulnerability to climate change-driven increase in drought frequency and severity is even greater (Image: Asian Development Bank)

In September 2021, the World Bank published a report on climate change and internal migration, which assessed the potential for migration within Central Asia (among other locations) under climate scenarios for 2030 and 2050. The report also examines the nexus between slow-onset climate change impacts, internal migration patterns and development. By 2050, Central Asia could see as many as 2.4 million climate migrants.

The Ferghana Valley (which straddles eastern Uzbekistan, the southern Kyrgyz Republic and northern Tajikistan), the area around Tashkent in eastern Uzbekistan, and lower-elevation areas of southern Tajikistan, including the capital Dushanbe, are all climate in-migration hotspots. So too are the denser settlements in northern Kazakhstan (such as Karagandy, Nur-Sultan and Kostanay). Projected increases in water availability and crop productivity are among the conditions attractive to migrants.

Meanwhile, climate out-migration hotspots are expected to emerge along the southern border of Kazakhstan, in the areas surrounding the Ferghana Valley that fall within Uzbekistan and Tajikistan, and in the area around the Kyrgyz capital Bishkek, where water availability is projected to decrease and crop productivity is lower. Smaller areas of eastern Turkmenistan and southern Uzbekistan along the Amu Darya River are also expected to be climate out-migration hotspots.