November began with Chinese scientists advancing the world’s largest weather modification project and ended with a Chinese researcher’s claim to have produced the first gene-edited babies. Both of these futuristic announcements were met with a fierce backlash in China. Over 100 scientists signed a statement criticising the gene-editing experiment for sacrificing ethics in the blind pursuit of progress. Meanwhile, a group of meteorologists publicly questioned the government’s investment in “Sky River”, a sweeping artificial rain project that remains theoretical.

These rare outcries from China’s scientific community have exposed flaws in the governance of cutting-edge scientific experiments, which loom large as the country looks to science and technology breakthroughs to address its environmental and social challenges.

Diverting water in the sky

The root of the Chinese character “to govern” (治) is water. For rulers over the centuries, controlling floods in the southern Yangtze River Basin and managing drought in the northern Yellow River Basin has long been central to political legitimacy and stability in China. With climate change projected to increase the intensity of droughts throughout China and widen drought-affected areas in the north-west, among other regions, Chinese scientists have faced greater pressure to manage water supplies.

Through the South-North Water Diversion project, first envisioned by Mao Zedong in the 1950s, the Chinese government has built two major canals channelling an additional 27.8 billion cubic metres of water north every year (about 3% of the Yangtze’s annual discharge volume). However, a third route, which would divert water from the Yangtze’s tributaries to the Yellow River at their headwaters on the Qinghai-Tibetan Plateau has stalled due to engineering challenges.

To avoid the hassle of moving water on land, scientists have looked to the sky for inspiration. The “Sky River” project is considered part of the third route, except the water transfer would happen in the atmosphere, rather than through canals.

Back in the early 1990s, MIT scientists used the concept of “atmospheric rivers” to describe water vapour transport bands they identified in the troposphere. China’s Sky River project proposes large-scale manipulation of these bands of water vapour using cloud-seeding techniques that could manufacture rainfall.

According to Wang Guangqian, president of Qinghai University and the leader of the Sky River team, the project seeks to increase rainfall at the headwaters of the Yangtze and Yellow rivers where “cloud resources are abundant”. Without intervention, these weather systems would typically move to the southern Yangtze basin where rainfall would naturally occur. By cutting off the migration of rain clouds in the Qinghai-Tibetan plateau using cloud-seeding, the team hypothesises they could supplement the flow of the northern Yellow River. 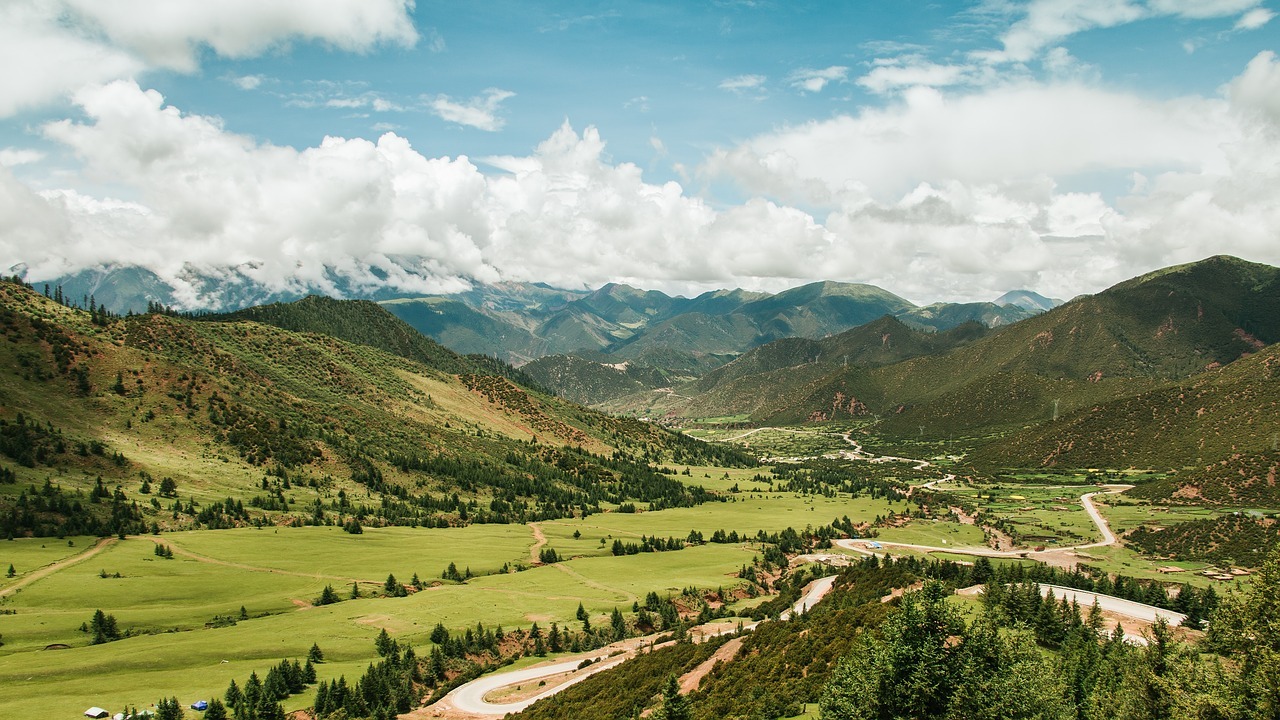 The Qinghai-Tibetan plateau could get more rainfall under the proposed Sky River project [image by: lijia970329]

In 2015, Tsinghua University, Qinghai University, and the province’s meteorological bureau set the Sky River project in motion, forming a research partnership, according to ScienceNet.

The project also received national level funding and support. In 2016, the Ministry of Science and Technology accepted the project as a “technological innovation project with international significance”. Subsequently, it was designated a national key research project, according to Wang Guangqian.

The team has been experimenting with techniques to seed clouds over large geographies. One method uses chambers that burn and send silver iodide particles into the atmosphere to seed clouds. One of the project’s researchers told the South China Morning Post, “[So far] more than 500 burners have been deployed on alpine slopes in Tibet, Xinjiang, and other areas for experimental use.” The researcher described how “sometimes snow would start falling almost immediately after we ignited the chamber. It was like standing on the stage of a magic show.” The project intends to build tens of thousands of these chambers.

Backlash from the science community

China has engaged in localised cloud-seeding for over 50 years, but implementing such an extensive project would be an unprecedented intervention. According to plans released in 2016, the project hopes to increase rainfall in the medium- to long-term by five billion cubic metres – nearly one fifth of the water transferred through the existent South-North canals. In the 13th Five-Year Plan period alone, the team plans to boost rainfall in the Sanjiangyuan region of the Tibetan plateau by half that amount. Wu Guoxiong, an atmospheric scientist at the Chinese Academy of Sciences, doubts that it is possible to reach those levels of artificial rainfall: “Artificial rain is still in the experimentation phase, so far the best results have increased rainfall by 10-20%.”

Criticism escalated last month when China’s Aerospace Science and Technology Corporation announced that it was developing monitoring satellites and rockets to aid the Sky River project. The company said they would launch two satellites by 2020 and complete a network of six by 2022.

Scientists lambasted the high-profile technology investment. Lu Hancheng, a professor at the National University of Defense Technology’s Institute of Meteorology and Oceanography, told ScienceNet, “This is an absurd fantasy project with neither scientific foundation nor technical feasibility. That it got support to launch is incomprehensible. Public funds should be cherished.” Other experts commented that meteorologists, who they say have not been included so far, should have been consulted.

In an interview with China.com Wang Guangqian, emphasised that the project is still at an early stage. He also said the project has gone through serious review with meteorologists involved. Government funding has been spent judiciously, he maintained, saying that the satellites would be used for other purposes beyond the Sky River project.

The project may be far from operating at full-scale; however, critics say China’s scientific experimentation can rapidly escalate from concept to implementation without proper safeguards. This was the case with the recent gene-editing experiment. The scientist did not submit his work for peer review or file the experiment as a clinical trial with the government before implanting genetically modified embryos in real human subjects, a step that scientists globally have considered out of bounds.

The gene-editing experiment was undertaken by a biophysicist without experienced in human clinical trials. Similarly, the Sky River team has been criticised for being composed primarily of hydrologists not meteorologists.

Beyond the importance of a project’s scientific basis, Chen Ying, senior research fellow on the governance of geoengineering at Chinese Academy of Social Sciences, said that projects also need to be reviewed more holistically. She said that Wang Guangqian, the Sky River project leader, has focused on water resources without considering governance issues. “Technology is the foundation, but even if the technology is feasible, it doesn’t mean the project should be carried out. You need to comprehensively and objectively evaluate economic, ecological, ethical and other effects,” she said.

Experts interviewed by chinadialogue said that the risks involved in the Sky River project remain unclear due to insufficient research. The cloud-seeding chambers in use are reportedly clean enough to operate in conservation areas, but they emit carbon dioxide. The larger effects of altering the region’s climate are not well-documented, but the project could affect local and transnational ecosystems given it will take place at the source region of Asia’s major rivers.

Both Chen Ying and John Moore, a British scientist at Beijing Normal University who leads China’s national geoengineering research, said that unlike past small-scale cloud seeding, the Sky River project could be considered a form of large-scale geoengineering, the alteration of natural systems to fight climate change. “If the full-scale project were shown to be feasible and could achieve what they want, I would say it’s climate engineering. But I am highly sceptical that it is at all feasible from a scientific perspective,” said Moore.

Researchers at Oxford University proposed a set of global principles governing geoengineering, including public participation, independent assessment of impact, and most importantly, “governance before deployment”. However, these have yet to be adopted as international law. The only international rule that exists is a guideline for geoengineering field experimentation established under the UN Conference for Biological Diversity (CBD). The guidance permits small-scale field studies “subject to a thorough prior assessment of the potential impacts on the environment”. China, as a party to the CBD, is held to this guideline.

One outcome of the recent controversies is that the Chinese and international scientific communities have become more outspoken. Already, public pressure has had an effect. He Jiankui, the scientist behind the gene-edited babies, is under investigation and China’s vice minister of science and technology said his scientific activities would be suspended. As for the Sky River project, after the meteorologists’ criticisms, it has taken a step toward greater transparency. Wang Guangqian said that the public is welcome to visit the project’s Qinghai lab.

From the spread of diseases to adapting to climate change, scientists will come under increasing pressure in the 21st century to push the boundaries of their fields, inevitably straining existing governance mechanisms. In his interview, the Sky River project leader reflected the impulse to act saying, “We don’t want to just publish theoretical papers, we want to apply our papers to the earth”.

Best of 2018: Building a forest in Karachi

Save lives, train women in Nepal and India to deal with disasters

The river ‘is not for sale’ warn Mekong villages