Every day, fisher Nguyen Thi Nan and her husband drop traps into the Red River in the city of Lao Cai. They hope to catch fish and prawns at this point in the river, near the China-Vietnam border.

“If we’re lucky, we can catch prawns worth 50,000 Vietnamese dong [about USD 2]; if unlucky then nothing,” says Nan. Her family began fishing in the border province of Lao Cai 10 years ago. They once earned enough to live off and send their child to school, but now, she says, “there’s nothing left. The prawns and fish have all gone downstream.” 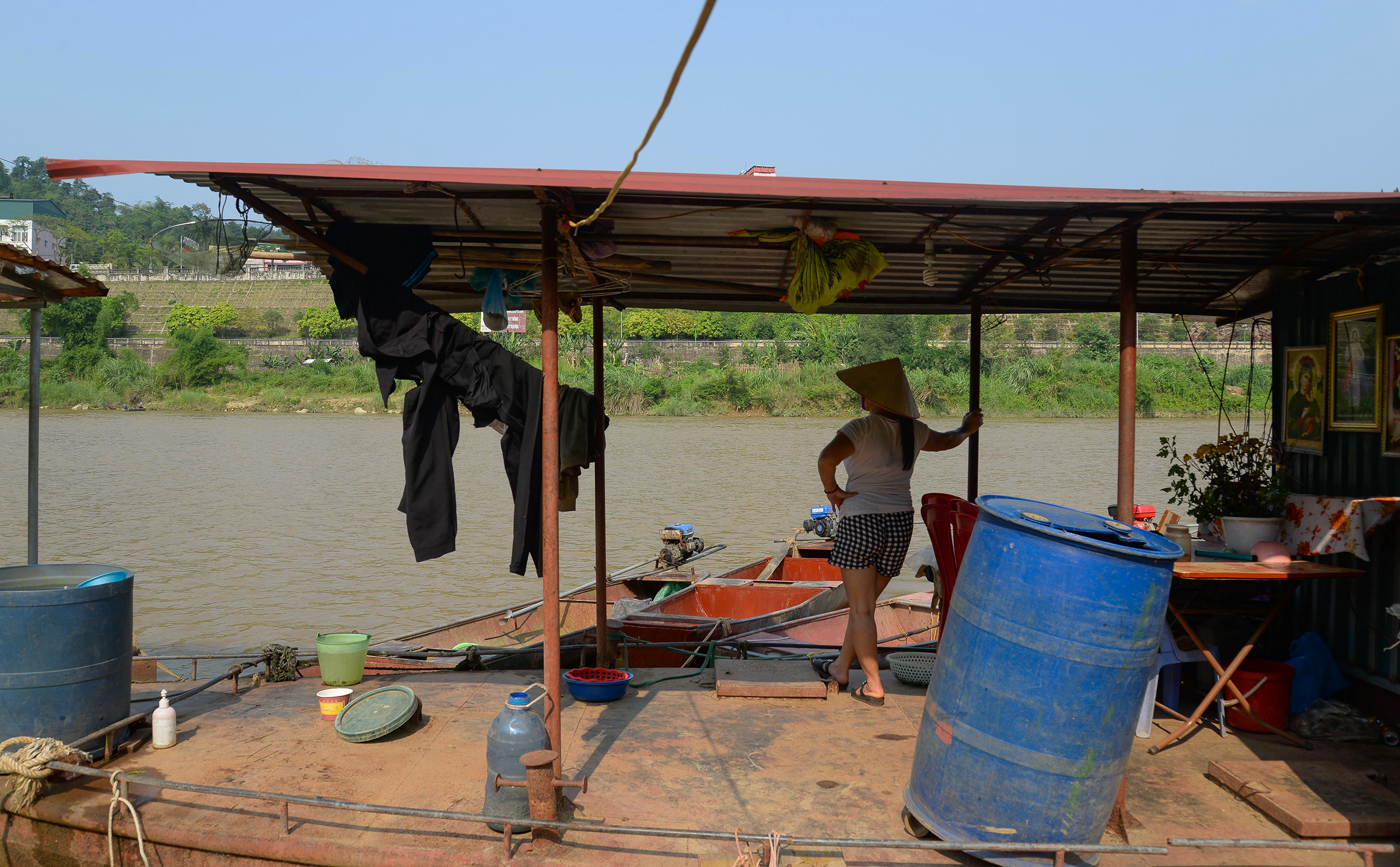 Catches have declined dramatically since Nguyen Thi Nan and her family started fishing on this section of the Red River 10 years ago (Image: Linh Pham)

The Red River, also known as the Hong, was named after the red soils washed downstream from its source in China’s Yunnan province. Its major tributaries – the Da, Lo and Thao rivers – also rise in China. They all merge with the Red River just north of Vietnam’s capital, Hanoi, and flow into the Gulf of Tonkin.

Like other local people, Nan believes the river’s flow and habitats have been changed by the proliferation of major hydropower dams upstream in China, with detrimental consequences for communities and nature. Studies suggest a lack of cross-border cooperation along the Red River poses risks to life from flooding and has altered silt levels, water supplies for irrigation and the river’s ecology.

There are more than 60 dams and their reservoirs – 41 hydropower dams, two multi-purpose dams and 25 irrigation dams – in China’s section of the Red River basin, according to the CGIAR Research Program on Water, Land and Ecosystems, an Australia-backed NGO working on cross-border waters in the region. Vietnam has also built multiple dams on its section of the river.

By trapping sediment behind their reservoir dams, the upstream hydropower plants have changed the river’s ecology, explains Nguyen Lan Chau, deputy director of the Institute of Mechanics and Environment Engineering, a Vietnamese government research agency. She has seen the river run clear at Lao Cai in the dry season, as the red silt that gives it its name is no longer arriving. Less silt means the water flows faster, more riverbed erosion and meagre soil deposits for Vietnamese farmers. 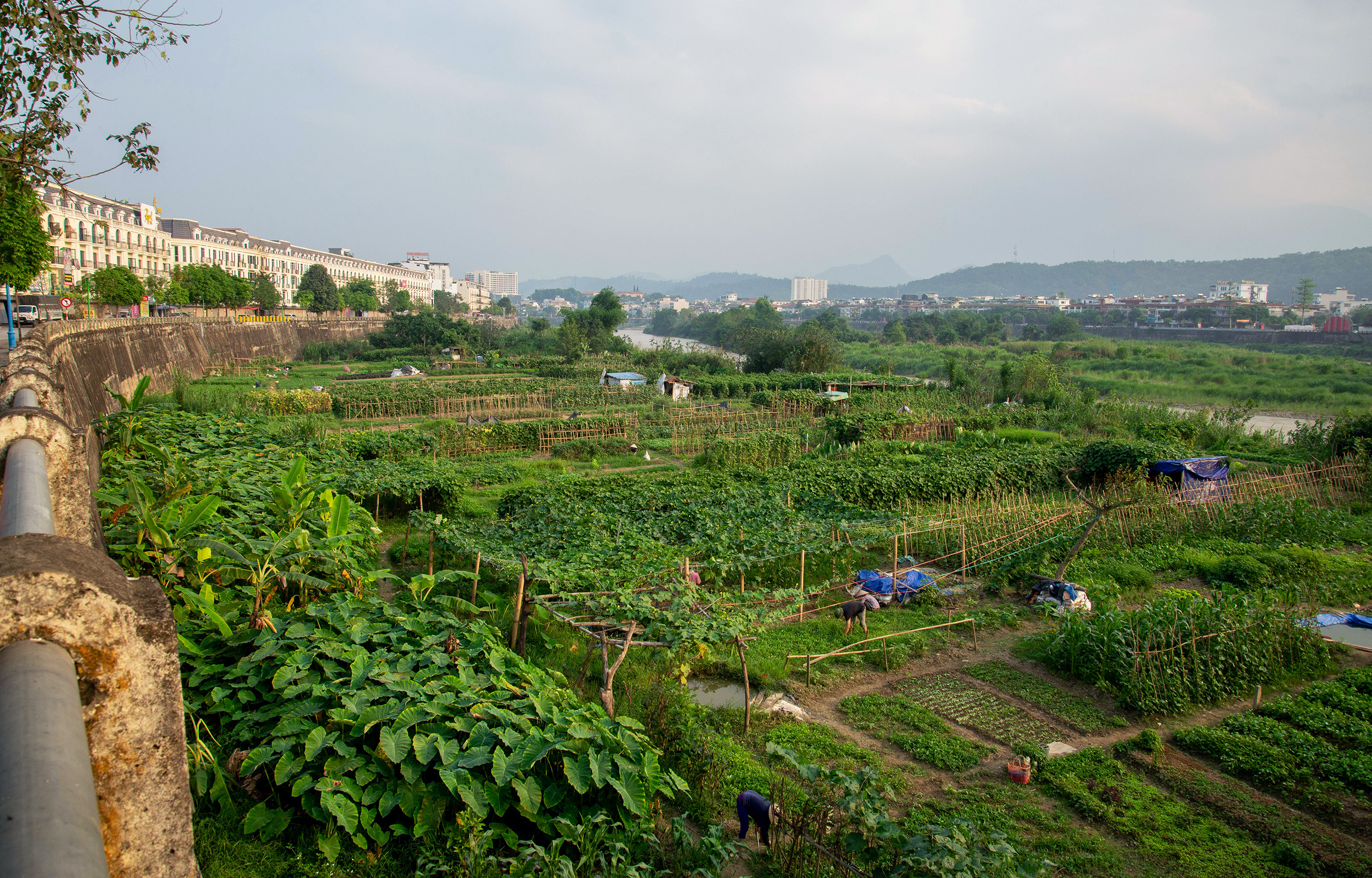 Local growers take advantage of the fertile soils on the banks of the Red River, but with upstream dams trapping sediment, the river is now carrying less of the nutrient-rich silt it is named after (Image: Linh Pham)

There are 12 hydroelectric dams on the Thao tributary of the Red River, which runs from China and through Lao Cai province, according to Le Anh Dai, director of Binh Minh International Tourism Company in Lao Cai city. Dai says that at China’s Madushan dam, the closest to the border, “the reservoir water is crystal clear”.

A 2017 study funded by the National Natural Science Foundation of China found that the cascade hydropower development had altered the downstream ecosystem of the Red River and “reduced [its] stability”. The study also noted that the total biomass of ecosystems below dam channels was significantly lower than natural channels and channel reservoirs.

More recent studies in Vietnam have shown dams on the Red River and its three main tributaries decreased total suspended sediment and total organic nitrogen between 2010 and 2015. These are major factors in the river’s overall health.

Chinese monitoring stations “do not share any data or operating procedures of those reservoirs so [Vietnam is] in a passive position”, says Chau.

China first stepped up its hydropower dam-building programme in the 1980s, which was a decade of hostilities and strained relations with Vietnam. This legacy of poor information sharing and limited cooperation has never been fully remedied.

China used to share daily data from 15 hydro-meteorological stations along the Da, Lo and Thao rivers. “Then in 1979 there was the Sino-Vietnamese war and everything stopped. We received nothing from then on. And right around that time they began to build a lot more hydropower plants,” says Chau. She worked at Vietnam’s National Centre for Hydro-Meteorological Forecasting in the 1970s and remembers getting Chinese data on river flows and rainfall.

The two countries restored official relations in 1991, but China has not resumed sharing of its hydro-meteorological data.

Chau says the upstream Chinese dams “need only to increase power generation for the water [level] to rise 1.5-1.6 metres. And a rise of 1.5 metres already is deadly.”

She adds: “We are caught by surprise when they discharge floodwater.” Chau has noticed changes in the river since 2006, based on Vietnamese data stations near the border. “Before, the river flow would rise and fall steadily,” Chau says. Then, after 2006, it started to fluctuate more wildly. “We said to each other: ‘For sure there are hydro dams now.’” 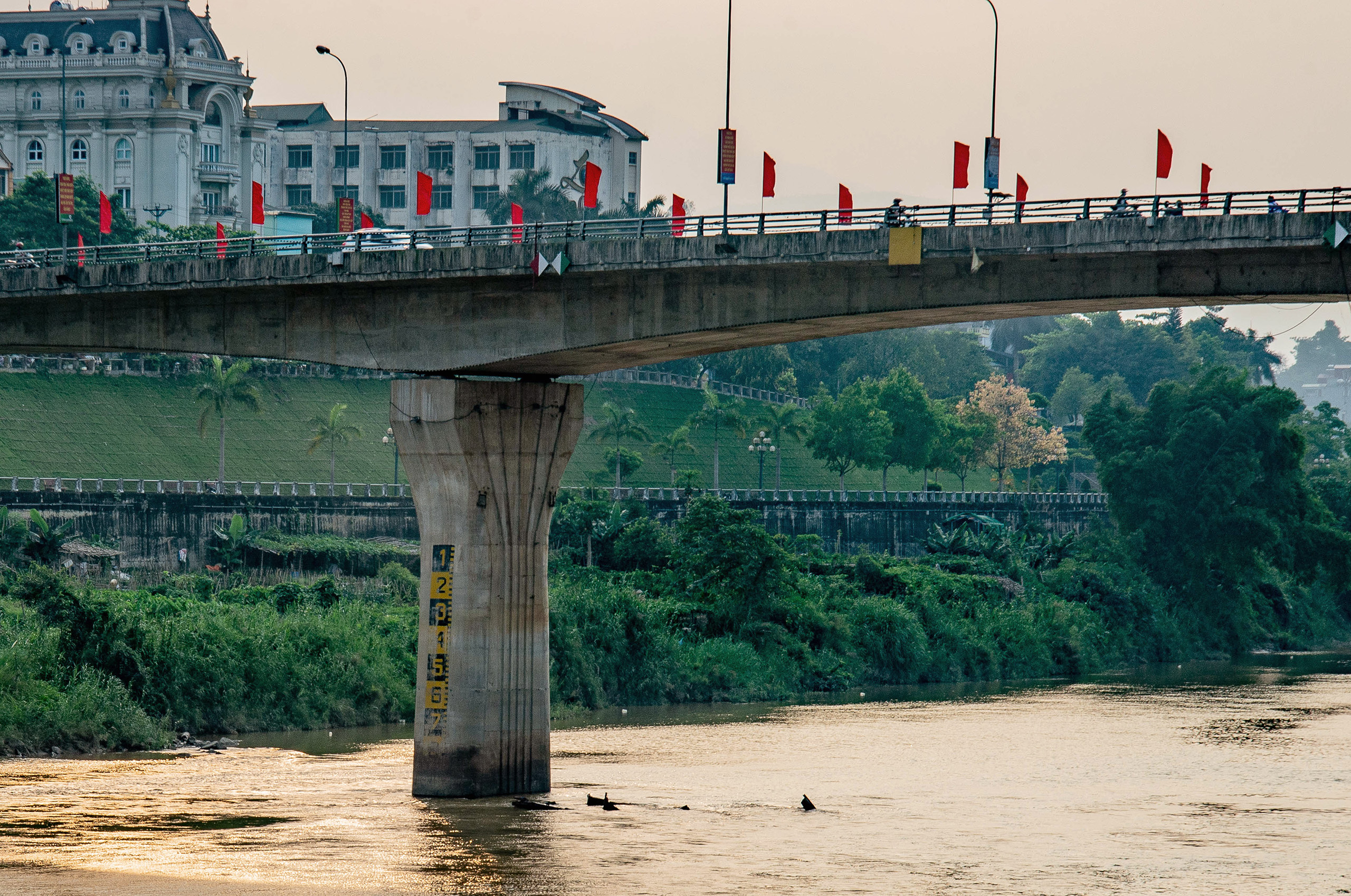 A measure of water depth on the Coc Leu bridge over the Red River. Sudden floods have become more common in Lao Cai over the past 15 years due to the operation of upstream dams (Image: Linh Pham)

In October 2006, two people died in Lao Cai province when, swiftly and without warning, the water level rose two metres. The flood was caused by a broken dam in the upper Thao river. Since then, Lao Cai has been prone to sudden floods: in 2015 the river rose three metres over a short period.

In August 2020, another flood threatened Lao Cai. However, the city received a welcome surprise in the form of a warning letter from China saying that, due to heavy rain, the Madushan dam would need to open its floodgates. The city leapt into action.

“That day alarms were blaring on both sides [of the border],” says Nguyen Doan Truong, a Lao Cai local. “From morning till evening, the loudspeakers were blasting constantly.” No lives were lost, though the water was strong enough to dislodge a boat that had been trapped under a bridge for two years.

Floods are not the only problem. “In the dry season, we run out of water, China also needs to store water,” Chau explains. “The water flow to Hoa Binh lake [on a tributary of the Red River] has sometimes been 140 cubic metres per second – the lowest in the last 100 years.”

Vietnam and China have tried to negotiate better ways to cooperate over the river’s risks and resources. In 2009, the two countries signed a memorandum of understanding to share flood season data. China shared flow data from five hydro-meteorological stations along the Da and Thao rivers. In return, Vietnam shared data from three stations at Bang Giang, Lang Son and Van Mich.

The agreement, however, has lapsed. China’s warning of Madushan dam opening its floodgates came from the provincial-level Department of Foreign Affairs for Hekou, Yunnan; due to proximity, Lao Cai province and Yunnan province maintain relatively close relations. 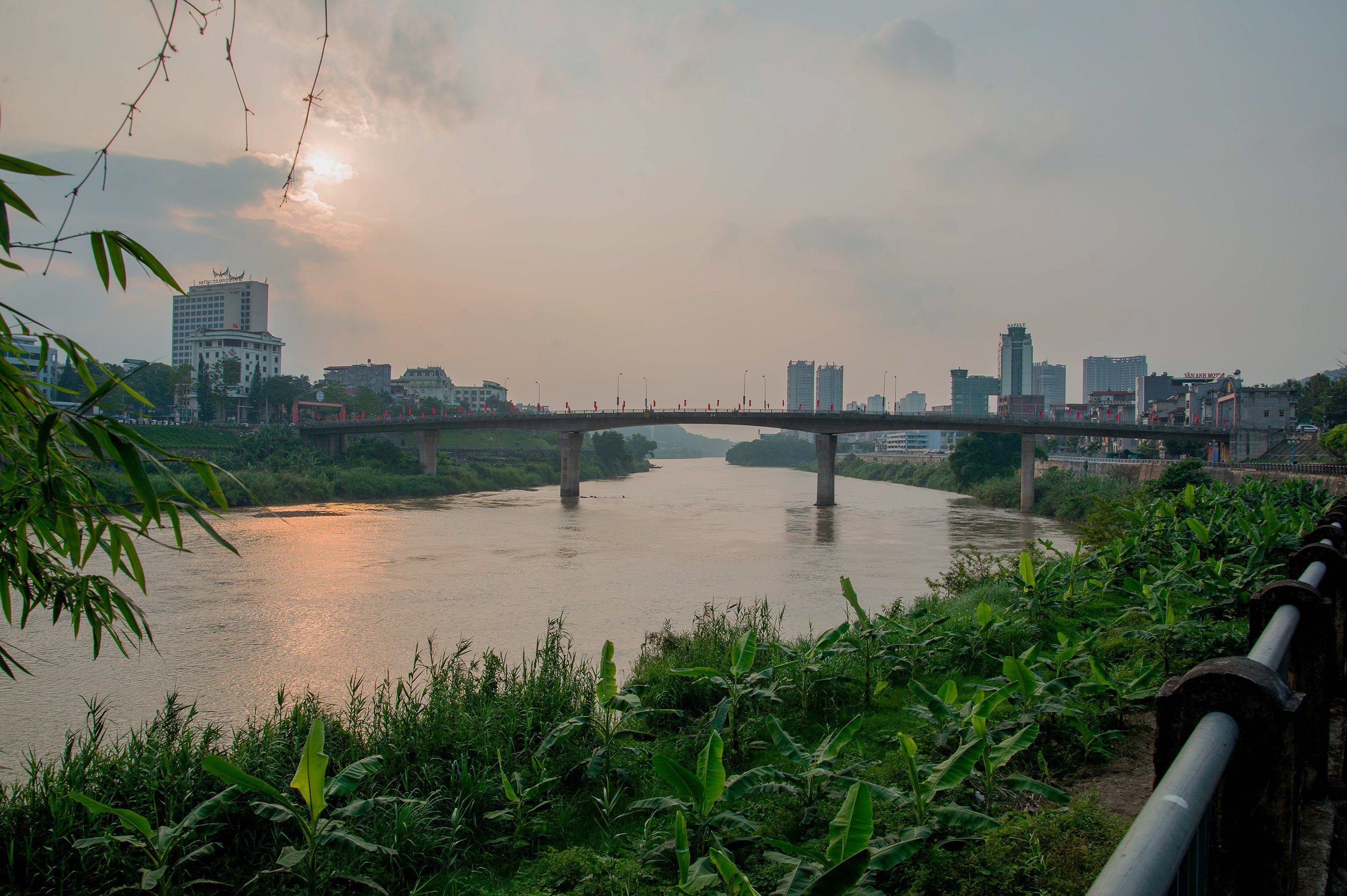 The Red River acts as a natural border with China for several kilometres north of Lao Cai city – the tall buildings on the right of this image are on the Chinese side. The city of Lao Cai benefits from this proximity, receiving a share of the energy produced by upstream hydropower stations. But more cooperation is needed to manage water resources and flood risks (Image: Linh Pham)

Via the Greater Mekong Subregion programme, hydropower produced in China is shared with Vietnam. Lao Cai, so close to the border, shares two existing high-voltage cross-border connections with Hekou and Xinqiao in China.

Dao Trong Tu, who heads the Vietnam Rivers Network’s (VRN) executive board, believes there is a need for a bilateral commission to share information. This might be similar to the Mekong River Commission set up in 1995 to coordinate between Thailand, Laos, Cambodia and Vietnam. Earlier this year, Tu reportedly told the Vietnam Express that he has visited China with colleagues from the VRN – an umbrella organisation of NGOs, government agencies and communities – to discuss the idea but has seen little progress.

Chau agrees that it is important to strengthen coordination with China. “For example, if China shares with Vietnam the operation procedures of the hydro plants close to the border, and announces when it needs to open the floodgates in advance, then we can predict the amount of water discharged downstream and help Vietnam create flood-prevention options.”

Poyang lake: Caught between a dam and a sluice wall