Scott M. Moore is a political scientist who focuses on water politics and policy, especially in China and South Asia. Scott is currently a senior fellow at the Penn Water Center, as well as a China program director and associate professor of practice in the Center for the Study of Contemporary China at the University of Pennsylvania.

In his new book,  Subnational hydropolitics: conflict, cooperation and institution-building in shared river basins, he looks at the causes of conflict over water within countries instead of between them  –  and finds that, contrary to popular belief, conflict doesn’t usually happen because of water scarcity or shortage, but rather institutional failures. Even in the era of climate change, there’s nothing inevitable about conflict over water, he argues, provided we make the right investments in strengthening our institutions 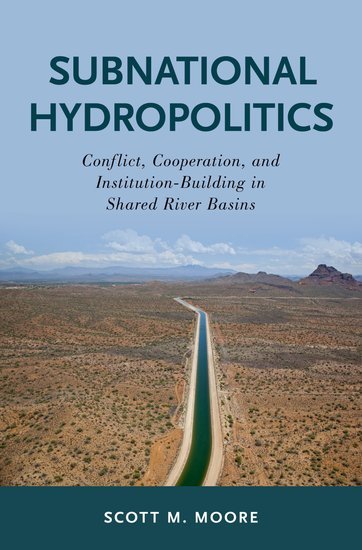 Beth Walker: In your book, you argue water conflicts at a local level are far more pervasive and destructive than conflicts between countries. Why is this the case? Can you give examples of some of the worst local level conflicts in India and China?

Scott M. Moore: Most issues involving water are very local — the areas affected by construction of dam, or pollution, or upstream water diversions, so it’s natural in many ways that grievances over water should be stronger at the local level.

Moreover, it’s easy to forget that there are lots of things that keep countries from fighting one another– in most cases, there’s significant trade, the prospect of outside intervention, diplomatic pressure, etc., that make conflict an unattractive course of action.

For subnational actors, though, there can be many fewer deterrents, especially if the state is weak or decentralized. In the case of India, one of the most vivid recent examples of water conflict is the seizure of Delhi’s main water supply route in 2016, the Munak Canal, by members of the Jat community protesting a court decision denying them status as a protected class. The incident highlights the potential for water to become a flashpoint for deeper tensions between ethnic, religious, linguistic, and other social groups. In China, a good example of subnational water conflict is the 2001 Jiaxing “blocking dam” incident, when residents in the city of Jiaxing, Jiangsu province, sunk old boats in a waterway to back up polluted water flowing across the provincial border into neighbouring Zhejiang province.

Beth: You also argue water conflict is a symptom of deeper conflicts between different groups at a local level rather than a cause. How should this change our approach to dealing with them?

Scott: I think it means we need to a) pay more attention to subnational politics, including issues of identity and sectarian tensions, rather than the international geopolitics that water conflict researchers typically focus on; and b) we need to invest more attention and resources in strengthening local and regional institutions. In particular, many countries lack good regional-scale governance institutions, like river basin commissions or authorities, which can address issues like water that are inter-jurisdictional in nature.

Beth: You describe the interesting dynamics between central and provincial governments in China that drive fierce competition over water rather than collective action at a local level, particularly over pollution control. How can this begin the change within the current system? Will recent attempts to set up a system of “river chiefs” improve the pollution crisis in China’s rivers?

Scott: I think most of the competition has to do with the incentive structure for local officials, which encourages them to try to maximise economic growth and provides few incentives to cooperate with neighbouring jurisdictions. Reforms to the cadre evaluation system to promote environmental objectives and the river chief system are a step in the right direction and should improve matters. But the nature of China’s political system, which is top-down and hierarchical, still doesn’t facilitate the kind of multi-level cooperation that’s really needed to tackle complex, regional-scale issues like inter-jurisdictional pollution or flooding.

Beth: Local conflicts impose huge economic costs. Why aren’t national policymakers doing more to put a stop to this, particularly given their constitutional powers in India?

Scott: In many cases it’s a political question. In India especially, the electoral math requires most governments to maintain coalitions, and therefore most are hesitant to alienate entire states by intervening in favour of one state over another. It’s more convenient to try to let the judicial system resolve inter-state water disputes– but it’s a poor forum to do so because many issues can’t be properly addressed through the legal system, and the process takes forever. It’s worth noting that similar calculations have prevented US politicians, especially presidents, from becoming too involved in inter-state water conflicts. It’s not worth the potential blowback!

Beth: You describe the Damodar Valley Corporation as one of India’s only true regional river basin governance institutions – what are the lessons here for elsewhere?

Scott: The Damodar Valley Corporation (DVC) was envisioned to be India’s answer to the Tennessee Valley Authority (TVA) [the US government agency established in 1933 to control floods, improve navigation and living standards of farmers and produce electricity along the Tennessee River basin]. Those sorts of multi-purpose institutions have important weaknesses; though they were originally intended to do a bit of everything – including being a utility, a regional economic development engine, and deal with issues like forestry and soil erosion – it’s hard to do all of those things well, and both the DVC and TVA proved to be a bit tone-deaf when it came to dealing with their stakeholders.

So the DVC is not a perfect model. That being said, I think the lesson is that strong river basin institutions usually depend on effective support from the central government to stay relevant. The DVC depended on strong support from Delhi in its initial period, but has lost it over time.

Beth: Another key theme is the importance of third party, and particularly NGO participation to improve river management. But given the environment is becoming more hostile for NGOs in many countries in the world at the moment how can NGOs get more involved?

Scott: Governments should appreciate that while facilitating NGO involvement can be difficult and contentious in the short run it brings irreplaceable long term benefits. The nature of water is such that it’s impossible for any government entity to address, understand, and represent the many interests and issues involved. At the same time, NGOs should focus their efforts on working with subnational as well as national governments. There’s sometimes a tendency to lobby at the highest possible level but in many cases the most good can be done at more local levels.

Beth: How have internal water disputes shaped China and India’s attitudes toward their international rivers? Has India really been better at cooperating with Pakistan over water than between its own states?

Scott: This is a good question that my book doesn’t fully answer. In my opinion, the existence of subnational conflict can contribute to international conflict in some cases; for example, dam-building in China is often supported by local governments for economic reasons, but it can of course have significant impacts on neighbouring countries if built near a border. Those are impacts that local officials usually don’t take into account, because it’s not seen as being their responsibility.

On the other hand, I do think in many cases international relations concerning transboundary waters are often more cooperative than over subnational shared waterways, and the Indus is a good example. In that case, I would say that overall cooperation has been better between India and Pakistan than between many of India’s states.

Beth: Are any of the lessons from successful cooperation in US and France relevant for the India/China context?

Scott: The positive lessons from the US and France are really that cooperation can be fostered and sustained over time with the help of outside actors like non-governmental organizations. It’s especially important to have institutions that include these actors in decision-making, so that they can help advocate for cooperative approaches to shared waterways that transcend the conflicting interests of water users.

From apples to vegetables in Sikkim

The race to develop the next generation battery