Asia does not have enough water to fuel its economy or provide food and power unless countries radically rethink their current export–led growth model, argues a new report from the Hong Kong based NGO China Water Risk.

At the heart of this water crisis are Asia’s ten major rivers that originate in the Hindu Kush Himalayas –and provide essential water to China, South Asia, and Southeast Asia.

“The Amu Darya, Brahmaputra, Ganges, Indus, Irrawaddy, Mekong, Salween, Tarim, Yangtze and Yellow are the continent’s cradles of civilization. Much of Asia’s population and economy are clustered there. Yet, climate change, evident in their common source region, the Hindu Kush Himalayas (HKH), threatens their upper watershed.

The flow of these 10 mighty rivers that provide water to 16 countries could be affected. One in every 2.5 Asians live along these rivers and over USD4 trillion is generated in these 10 river basins, but there is little conversation on the threats to Asia’s Water Towers or water and climate risks faced by these rivers,” write the China Water Risk team.

The report urges policymakers, businesses and investors to start seriously “assessing water and climate risks for assets located along these rivers…and to rethink development by wedding economic planning with water management.”

While these warnings will be familiar to regular readers of thethirdpole.net, China Water Risk aim to move this conversation forward among business and investor circles. 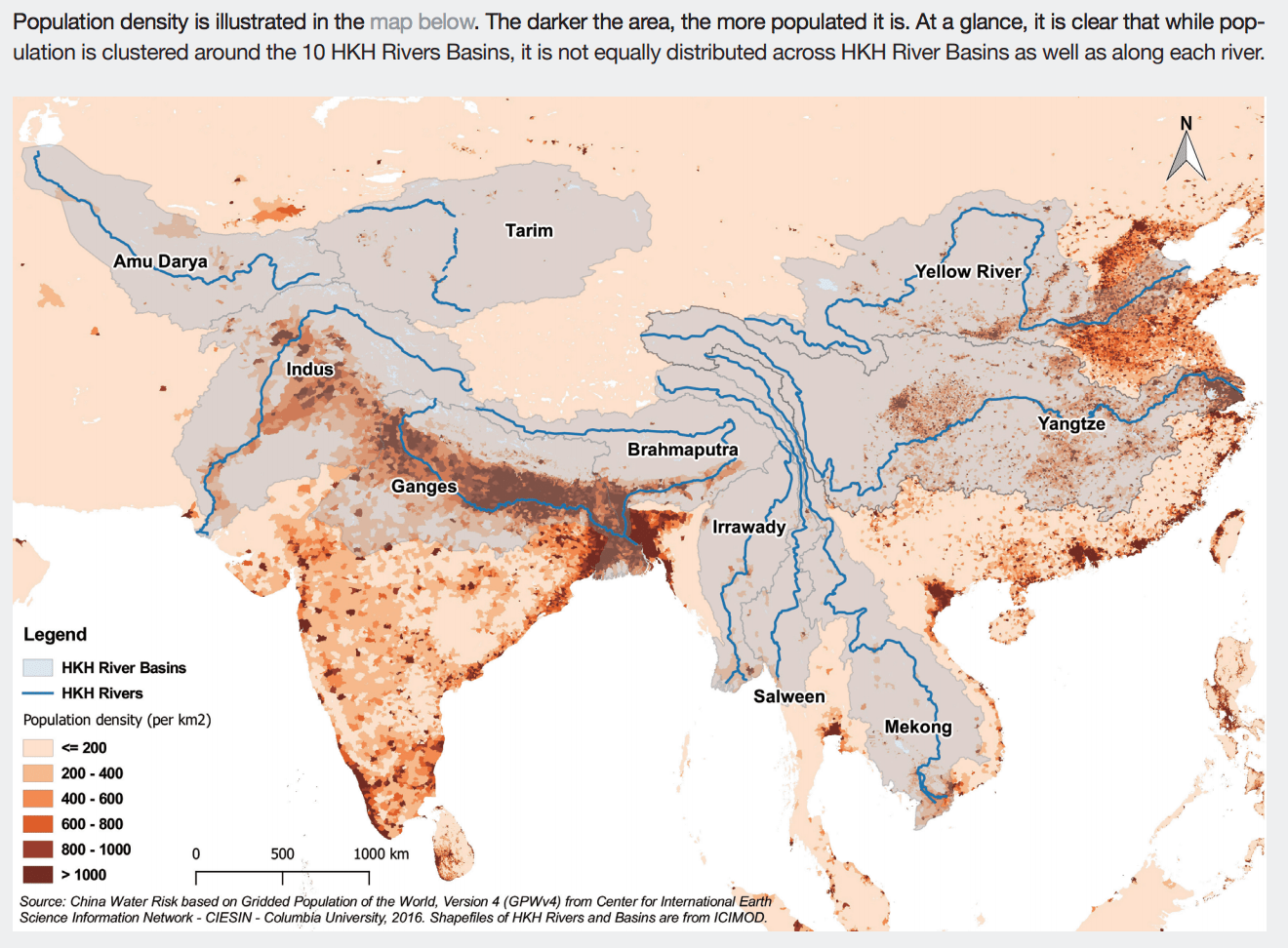 China Water Risk, an NGO led by former investment banker Debra Tan, has worked hard to get governments and companies to integrate water risks into financial decision-making. In the past they have partnered with HSBC to examine water risks of the power sector in China and India. For this report they partnered with the Chinese Academy of Sciences, and used input and data from International Centre for Integrated Mountain Development (ICIMOD)

Read the full report: No Water, No Growth

Their “sobering” analysis presents a case for urgent action: the current water-intensive export-led growth model is not sustainable, particularly in China, India and Pakistan where per capita water supply is dangerously low. This leaves their governments no choice but to find creative ways to boost GDP with less water and less pollution.

This includes transitioning from agriculture to service-led economies (in a region where agriculture accounts for 82% of water use), tackling pollution and weaning themselves off water-intensive industries, changing the type of crops grown and improving efficiency, the report recommends.

Experiences from developed countries show that trade can also be used. Europe uses less water than the US as it is largely reliant on water-intensive imports, essentially using other people’s water. Asian countries have a lot to learn here. For example, critically water scare Pakistan is the world’s largest exporter of depleting groundwater through agricultural products such as wheat, rice and cotton.

The report identifies four “priority rivers”: the Ganga, Indus, Yangtze and Yellow. Not only do they house the largest economies with an estimated total GDP of USD 3.8 trillion, they are densely populated with 1.5 billion people.

All four “priority rivers” are vulnerable to climate change, with glacier and snow melt contributing to over 20% to 80% of runoff in the upper reaches of these rivers. More worryingly, projections show that the entire Ganga and Indus river basins will likely see reduced runoff flows by 2055.

Using models from the Chinese Academy of Sciences the report estimates that temperatures will continue to rise – with increases doubling in six of the 10 basins – while snowfall will continue to decline with – future losses likely more than doubling for the Indus, Tarim and Ganga. River runoffs will experience mixed impact with four rivers seeing shrinkages in flow. These projections assume we limit global warming to a 2°C rise.

What this could mean in terms of ripple effects on permafrost melt, the monsoon and wider weather systems, degradation of crucial ecosystems, groundwater depletion and food production is still a big unknown.

Growing urbanisation adds further pressure to water resources as people flock to over 280 major cities located in the 10 river basins. This increases exposure to climate change in the form of extreme weather events such as floods and droughts.

The transboundary nature of these rivers adds a further layer of complexity to addressing these problems. “India and China, as upper riparians, must look beyond national interests to protect their common waters and lead the way in both transboundary and regional economic cooperation,” the report concludes.

Rising systemic exposure at the basin-level also means that “banks will eventually have to rethink credit policy to factor in environmental risks from a basin perspective.”

This largest accumulation of ice outside the two poles is often called Asia’s Water Tower. Already, China has lost glaciated areas greater than the land area of Thailand between 1970s and 2000s. A first step, China Water Risk suggest, would be to plug the gaps in data, monitoring and multi-disciplinary research, something thethirdpole.net has been advocating for a long time. 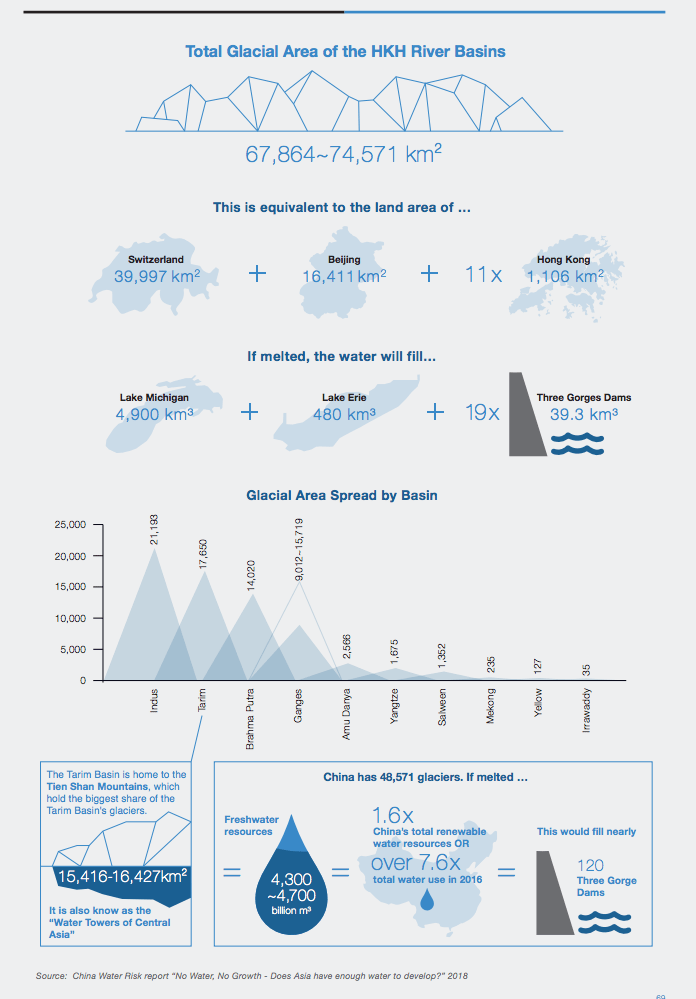 How to fill the finance gap?

While climate change is already evident in the region – from disappearing winter snow, to drying up streams and wetlands, to changes in what farmers can grow and new diseases and pests – there is still a lack of understanding of the impacts and a massive hole in financing available for both adaptation and mitigation.

There is still no figure available globally or for the HKH region on how much money we need to spend to ensure our future water security in a changing climate. For Asia and the Pacific region, the ADB estimates the annual cost of adaptation to be at least USD 40 billion. However, these costs could be bigger: taking into account climate change factors, spend on water and sanitation would rise to USD 802 billion for the HKH region by 2030, China Water Risk estimate. 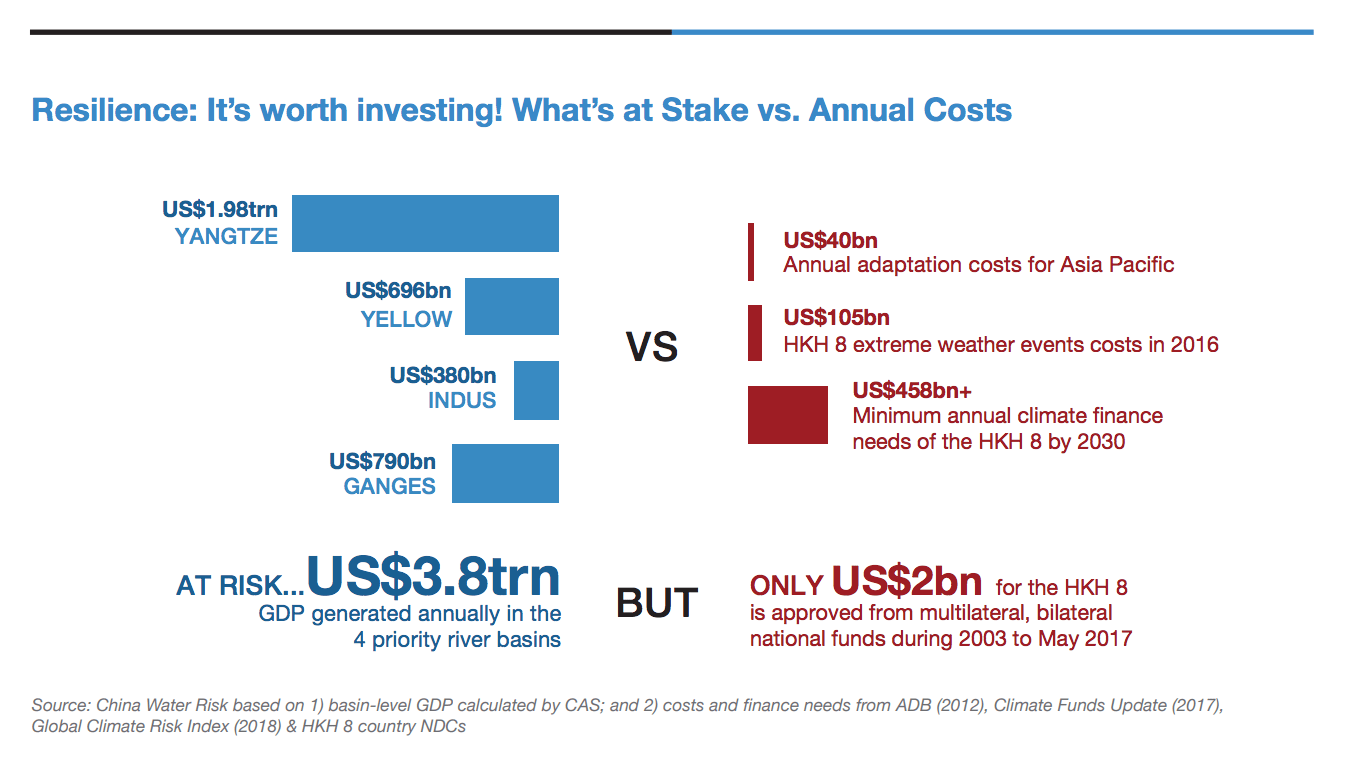 India and China must take the lead in developing new finance strategies that direct capital towards building resilience and less water intensive growth.

Investing in resilient infrastructure and taking action in adaptation and mitigation are not just costs, as the report points out, they can create business opportunities and jobs. For example Chinese jobs in renewable energy development have already overtaken that of coal mining.

China Water Risk believes that China’s efforts with green bonds issuance and public-private partnerships (PPP) to tap private finance are a start. And its regional focused initiatives such as the Belt & Road Initiative and the AIIB, can also help close the finance gap.

China is held up as an example of a country that is already successfully integrating economic planning with the management of water resources. The country imposed national water caps in 2011 signalling a limit to China’s GDP growth of 5.7% between 2020 and 2030. More recently, it has started trying to transition water-intensive and polluting industries toward a circular economy, move away from an export led to a service led economy and promote the ambitious Belt and Road Initiative.

While China green policies are laudable, there is still a wide gulf between rhetoric and reality. The real challenge comes in the implementation of national policies to better manage water across a vast country. These are challenges China Water Risk is silent on.

There is heated debate over whether China is getting a grip on its water crisis. Despite some progress, Chinese authorities continue to invest the bulk of money on heavy engineering and demand-side management of water through massive water transfer schemes rather than improving efficiency or upgrading water intensive industry. “Circular economy” policies are a laudable ambition, but pilot industrial parks have been slow to get off the ground.

It remains to be seen whether Chinese President Xi Jinping’s signature Belt and Road Initiative – to build network of railways, roads, ports and special economic zones around the world – will help support Asia move towards a more sustainable development model as has been promised. But there are growing concerns that the initiative simply provides an outlet for China to export polluting and water intensive industry overseas.

While China’s domestic economy has begun the shift away from fossil fuels, Chinese banks continue to heavily invest in coal projects overseas and its companies provide equipment for coal fired power stations, particularly in Pakistan and Bangladesh. Water intensive and polluting industries, from cement to textiles, are similarly shifting to areas of Asia where environmental regulations are weak and labour now cheaper.

If Belt and Road countries adopt a similar “grow first clean up later” approach to development China the risks highlighted in this report will be upon us much sooner than expected. Let’s hope that policy makers and investors sit up and listen.