While environmentalists advise caution, the Bangladesh government is considering a proposal from China to dredge and embank large portions of the Teesta River so that it forms a single managaeable channel.

Nearly 21 million people depend on the 100km Bangladesh stretch of the Teesta for their livelihood and other economic activities.

Originating in the eastern Himalayas, the river flows through the Indian states of Sikkim and West Bengal and into Bangladesh where it meets the Brahmaputra River before reaching the Bay of Bengal.

The Chinese proposal comes after Bangladesh has spent almost a decade trying to finalise a water-sharing deal with India on the Teesta. The signing of the deal was postponed at the last moment in 2011 due to opposition from Mamata Banerjee, the chief minister of West Bengal, India. Bangladesh has made no progress through negotiations with India since then.

Meanwhile, Bangladesh has seen water levels in the Teesta drop dramatically in recent years during the dry season, due to dam construction and irrigation canals upstream and the impacts of climate change – further straining relations with India.

The new China-backed Teesta river management project offers hope for the people living in the northern region of Bangladesh, who face floods and erosion during the monsoon and severe water shortages during the dry season. 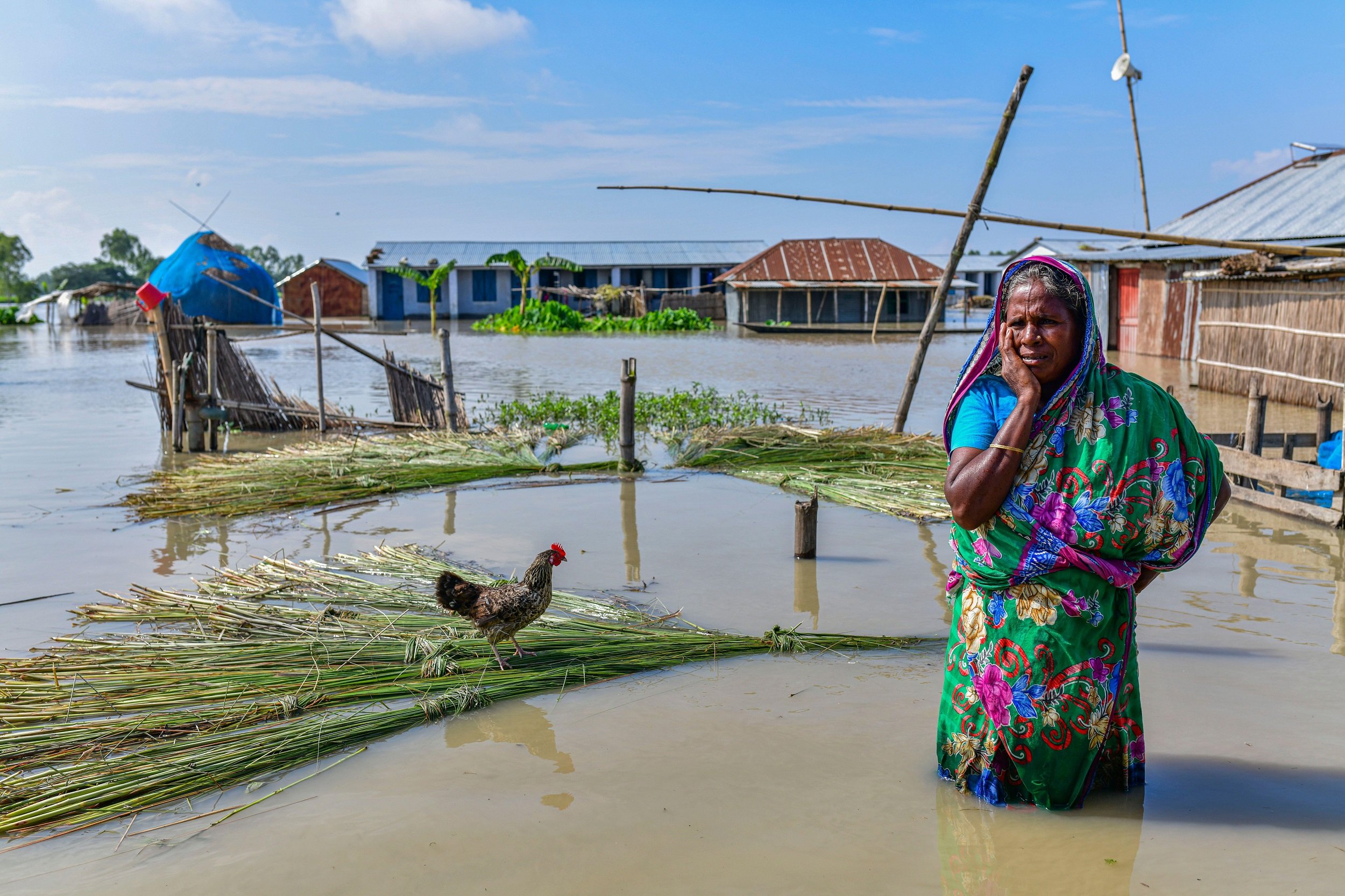 On 16th July, 2020 a woman stands in flooded waters next to her house in Bogura. One third of Bangladesh was under water after heavy rains hit the nation. At least 1.5 million people were affected, with homes and roads in villages flooded [image by: Zabed Hasnain Chowdhury/SOPA Images/ZUMA Wire/Alamy Live News]

“We got an offer from [the Chinese]. Now we need to sit with them to set down the terms and conditions before finalising the deal,” Kabir Bin Anwar, senior secretary in the ministry of water resources, told The Third Pole.

Last July, the Ministry of Water Resources sought a USD 983 million loan from China to implement the “Teesta River Comprehensive Management and Restoration project’”, in a letter to Bangladesh’s Economic Relations Division.

The Bangladesh government will bear 15% of total project cost (about USD 130 million) and the rest will come a Chinese loan.

The river is braided – a network of small channels and islands – created by the vast amounts of sediment carried down from the Himalayas every year, which builds up on the riverbed. This causes frequent floods and severe river bank erosion during the monsoon, while the basin faces water shortages during the dry season.

Every year, thousands of people lose their lands, homesteads and livelihoods.

The Bangladesh Water Development Board and Power Construction Corporation of China (Power China), a state-owned enterprise, signed a non-binding memorandum of understanding for this project on 28 September 2016.

Since then, Power China has submitted a masterplan and a feasibility study for the project. The summary of the preliminary project proposal attached with the letter, describes its scope.

The plan is to build over 100km of embankments along both sides of the river, from upstream of the Teesta barrage near the border with India to the confluence with the Brahmaputra. 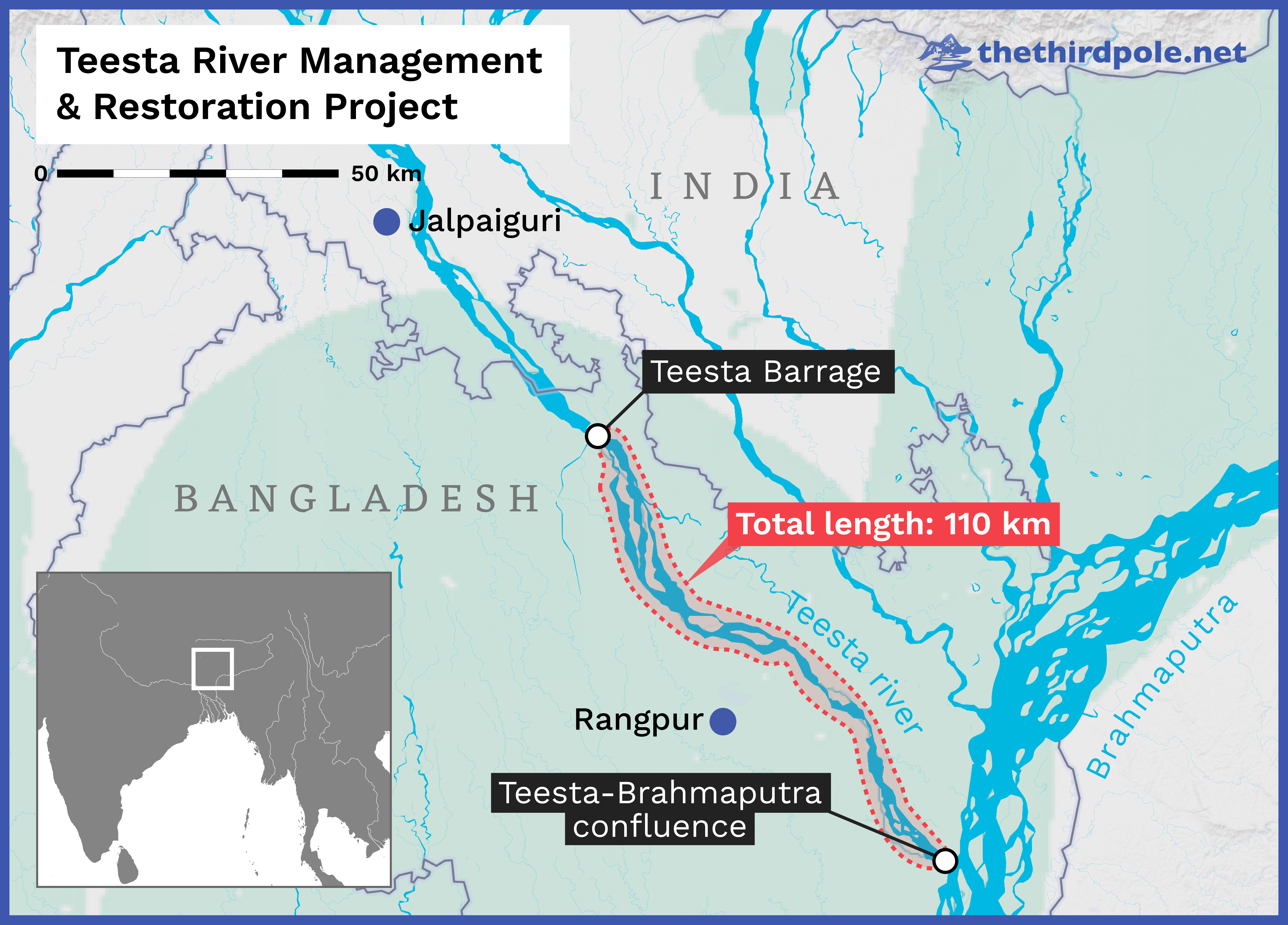 The project includes engineering measures to protect the riverbanks and prevent erosion by building groynes, cross bars and levees.

It will also involve dredging and deepening the Teesta to improve navigability.

These measures will stabilise the movement of the river and force its flow into a narrower main channel, say the project report and a promotional video. It also aims to increase water availability by building a network of canals and ponds to store monsoon rains for the dry season.

Dredged material will be used to reclaim land. Roads, satellite towns and industrial parks will be built along the riverbanks, including garment-processing factories and fertiliser plants.

“If we can implement the project, a vast area on the Bangladesh side can be supplied with water during the crisis season,” senior secretary Anwar told the local media.

Currently, the northern parts of Bangladesh face severe water crisis for at least two months a year because of low water flow in the Teesta. Most of the 111,000 hectares of irrigable land in the Teesta basin in Bangladesh is uncultivable during this period due to lack of water. In 2013-14 only 35% of the total irrigable area was cultivated.

The preliminary proposal says the project will mitigate social and environmental impact, restore ecosystems and promote local socio-economic development. But there are no details.

Project proponents say it will boost the local economy and promote green development. Last month, Power China signed an EPC contract to develop 500 MW of solar and wind energy in Bangladesh, the largest ever addition of renewable capacity in the country.

But there are reasons to be cautious, warned Syeda Rizwana Hasan, head of the Bangladesh Environmental Lawyers’ Association (BELA). The details of the proposed structural interventions and terms of the loans are still unknown and have not been publicly debated. Hence it is unclear how environmentally sustainable the project would be, she pointed out.

Some experts are sceptical about whether the Chinese-led plan will succeed.

Monsur Rahman, professor at the Institute of Water and Flood Management, Bangladesh University of Engineering and Technology, said he doubts whether it will be possible to make the project successful as the characteristics of the Teesta River are very complex.

It would be easier to build a barrage to retain water, said Rahman, an expert who has been involved in the Delta Plan 2100 – Bangladesh’s long-term plan to boost its economy and deal with climate change.

“The river has a braided characteristic [with multiple rivulets and islands] that has developed over thousands of years. So it will be a continuous struggle to keep the Teesta in a narrow single channel,” he said. Currently, the Teesta riverbed is 5-6km wide, and the plans would force the river into a deeper 1km channel.

In response to this observation, project director Chowdhury said they had sought the advice of a number of consultants before making the initial reports.

Ainun Nishat, the doyen of river experts in Bangladesh, said it is hard to say whether the project will be successful or not, as adequate studies have not been conducted on the river.

“If they want to hold the monsoon water in the river after dredging, they need to build a structure [such as ponds, reservoirs & canals] in the downstream part of the Teesta. So before making any comment we need to know more what they are planning to construct and how they are going to do it,” Nishat said.

The project has powerful proponents, but many experts and members of civil society want the Bangladesh government to assess the Chinese terms and conditions carefully before going ahead. There are concerns that Chinese financial assistance may have harsh economic and geopolitical implications. Project supporters say fears of a Chinese “debt trap” have been overplayed.

Bangladesh is currently seeking Chinese funding for nine development projects worth USD 6 billion, including the first phase of Payra seaport, the Barisal-Bhola bridge and a technology park.

During President Xi Jinping’s visit to Dhaka in 2016, the two countries signed memoranda for understanding for projects worth over USD 25 billion.

Hasan of BELA said Bangladesh needs to defend its rights over transboundary rivers. Undoubtedly, India has been insensitive to the legitimate claims of Bangladesh over shared rivers including the Teesta, she said. “They have kept the decision over Teesta water-sharing hanging for more than a decade, pleading state-level objection.”

It is the first time China has become involved in a river management project in Bangladesh, a country that shares 54 rivers with India. The Teesta region is strategically important and in India, many see this project as an opportunity for China to gain an advantage over its regional rival.

This is happening at a time when tensions are high between India and China, which is pursuing its Belt and Road Initiative to build better connectivity and, critics say, cement its influence in the region.

After news of Chinese investment in the Teesta management project broke out in the Bangladesh media, New Delhi sent its foreign secretary Harsh Vardhan Shringla to Bangladesh’s capital, Dhaka.

Then, a few days after this article was first published, on The Third Pole, India reached out to Bangladesh and promised to resume the much-delayed meeting of the Bangladesh-India Joint River Commission to discuss six treaties on transboundary rivers between the two countries, including the Teesta.

This story was first published on September 28, 2020

Volunteers in Jammu strive to save the Tawi river