A year ago, Mohan Tanti realised that the intense pain he had been suffering from for a while was due to kidney stones. Tanti lives and works at Letekujan, a tea plantation in Jorhat district in Assam, northeast India. To get treatment, he travelled to Jorhat city – about 23 kilometres away from Letekujan. At the public hospital, doctors told Tanti that they couldn’t do much about his disease. 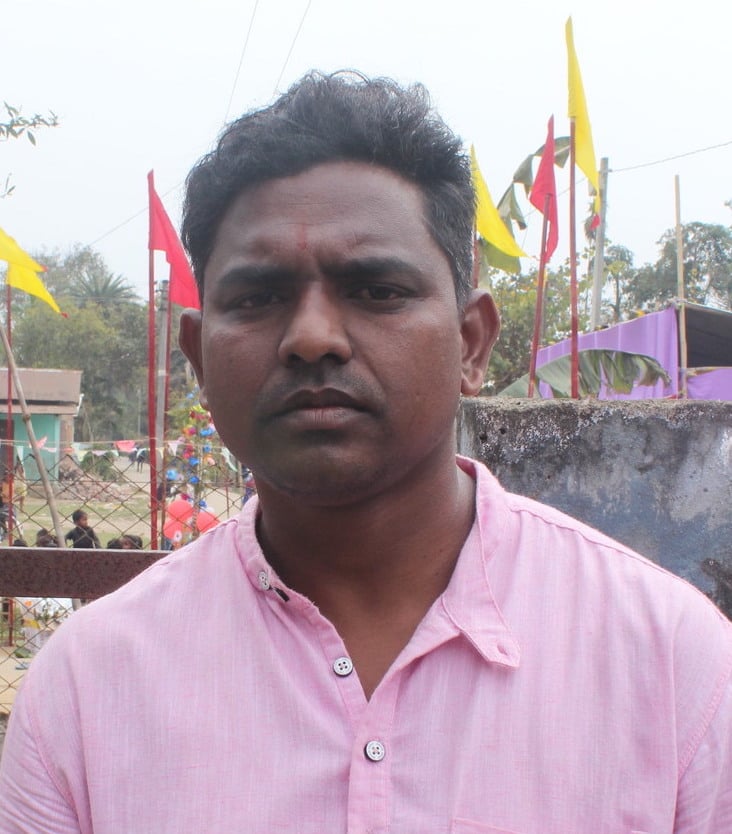 Mohan Tanti suffered from kidney stones a year ago, a condition made more likely by poor-quality water and dehydration (Image: Sanskrita Bharadwaj)

The 35-year-old, who owns a small grocery shop in Letekujan, then spent more than 100,000 Indian rupees (nearly USD 1,400) at a private hospital in Dibrugarh city, 156 km from Letekujan. “Thanks to the surgery, I have now recovered,” Tanti said. “But the water condition is terrible in the plantation area, which has led to many of us falling sick.”

Studies have shown that water quality and intake are important risk factors in the development of kidney stones. Both are matters of concern in Assam’s tea plantations, known as gardens.

Nearly 55% of tea produced in India is from Assam, with the state supplying 80% of the country’s exports of the commodity. To produce such quantities requires a large workforce: around one million people labour in more than 800 tea gardens. These plantations are located far from towns and cities, and lack proper drinking and sanitation facilities. Several studies have found that drinking water quality is poor, and most plantations have no toilets, drinking water or running water.

As Tanti recounted his ordeal, Shyam Karmakar, another worker from the same plantation, chipped in: “He [Tanti] had the money so he was able to save himself, but there are so many of us who wouldn’t have been able to afford it.”

If people don’t have access to clean water to wash their hands, then it will be difficult to contain the spread of Covid-19

A 2019 study published by Oxfam interviewed 510 workers from 50 Assam tea estates. The report revealed that water in every tea estate was of “poor quality”, often containing heavy metals. “The lack of clean and plentiful water on the estates – and the fact that the habit of filtering water is almost entirely absent – means that diseases such as cholera and typhoid are common,” the report said.

With limited access to healthcare and average salaries of less than Rs 200 per day (about USD 3), Assam’s tea garden community is one of the state’s most marginalised and vulnerable groups. Due to their high numbers, tea workers are a large and influential voting bloc. Nevertheless, despite regular promises of higher wages, better living facilities and robust healthcare services, they continue to live an undignified life.

Access to sanitation is crucial in stopping the spread of Covid-19. According to the latest reports, over 200 workers from at least two tea gardens in Assam’s Dibrugarh district have the virus, prompting the district administration to lock down the estates.

A public health worker from Assam, who requested to remain anonymous, pointed out that hand washing with sanitiser is essential to curb the outbreak. He said: “In the tea gardens people can’t afford hand sanitisers. They primarily use water and soap. If people don’t have access to clean water to even wash their hands, then it will be difficult to contain the spread of the virus.”

The pandemic has made clear the importance of clean water for good health as never before. “If [workers] fall sick due to unclean water and Covid-19, they will have to be hospitalised, and the tea gardens lack proper medical facilities,” the health worker added.

Forced to drink water from ponds

The people of Letekujan depend entirely on a pond near the plantation for water. They use the water for drinking, bathing, cooking and washing clothes.

Visitors “won’t even touch the water… It is so dirty,” Mohan Tanti said. When The Third Pole visited in February 2021, its surface appeared sludgy with dirt and algae. Tanti told this reporter in May that the water quality has since deteriorated further, with people unable to drink it. 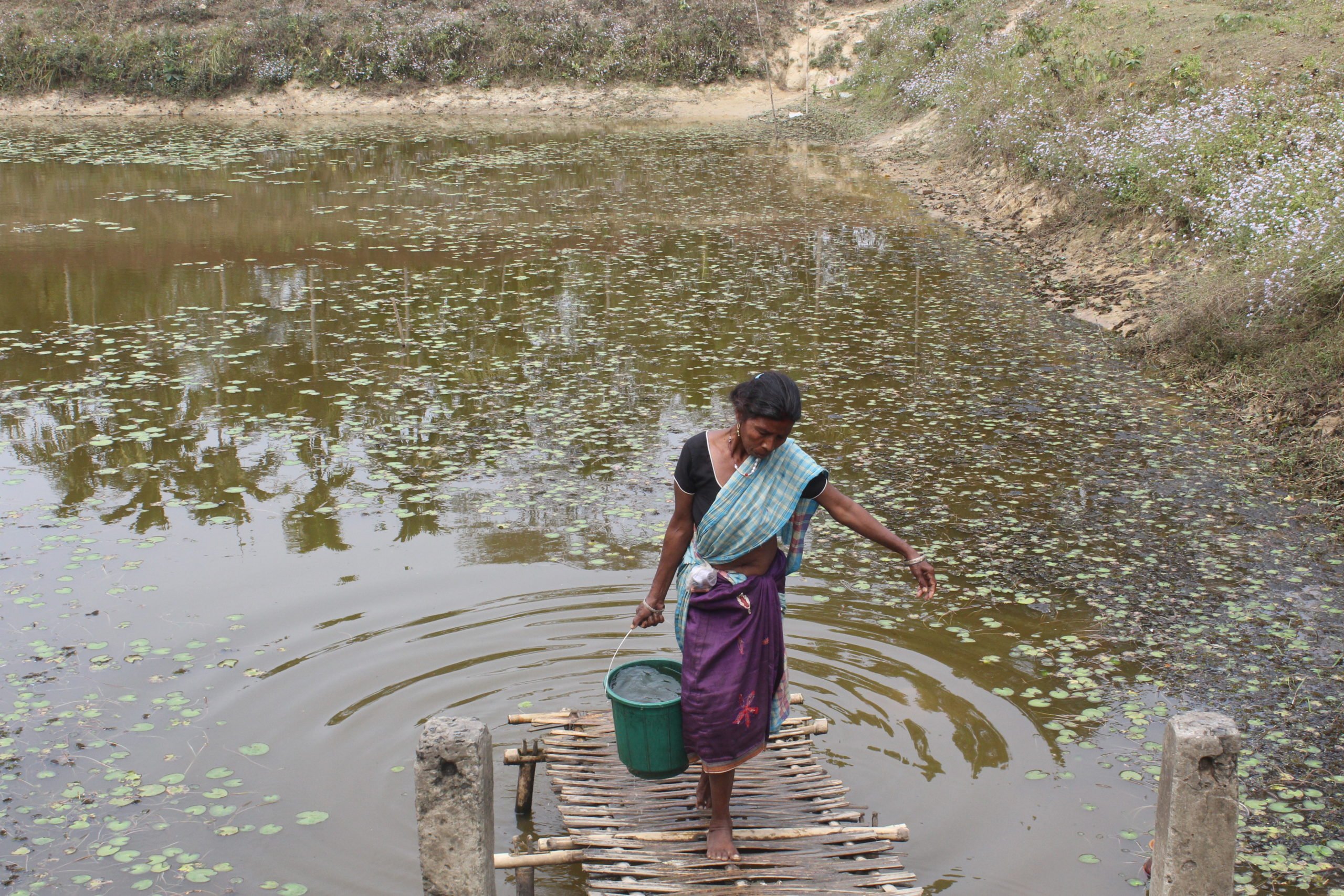 A pond near the plantation is used for drinking, bathing, cooking and washing clothes by the workers of Letekujan (Image: Sanskrita Bharadwaj)

“Babus [plantation managers and other higher-up officials] won’t drink this water. But labourers have no option,” said Sonia Tanti, district secretary for Jorhat of the All Adivasi Women Association of Assam (AAWAA). “Most labourers who live here are extremely poor and they can’t afford to get a filter at their homes,” she added.

In early 2016, a motor-powered pump was installed in Letekujan. It was used for less than two years: it stopped working in early 2018, when the new local government stopped maintaining it.

According to Shyam Karmakar, the tea garden worker, the pipe is connected to the Doyang river, which passes through Nagaland state and flows into the Dhansiri river in Assam. “The pipe is broken at its source and at several other places on its route,” he said.

“We have not had water supply for two years now. This pump is a farce,” said Mohit Patra, a member of the tea workers’ body Assam Chah Mazdoor Sangha. Both Tanti of the AAAWA and Patra said that despite several complaints to the tea garden authority and management, their respective wards and several memoranda to the district commissioner, no help has come their way so far.

“We do notice that many tea garden communities have severe water crises and they end up drinking and using water from nearby ponds,” said the public health worker.

Previous schemes to provide water have focussed on hand pumps and tube wells.

“The problem with the tea garden community is that they drink water directly from these installed pumps and wells, which means that they are consuming unfiltered groundwater,” said the public health worker. He added that the groundwater is often contaminated and not tested for pollutants. For instance, he said, often the platforms that tube wells stand on are broken, which can expose the groundwater to pollutants. “People are washing clothes and cups there. Some even bathe in the same area, which is why diseases like diarrhoea and jaundice are prevalent in the tea garden areas,” he said. 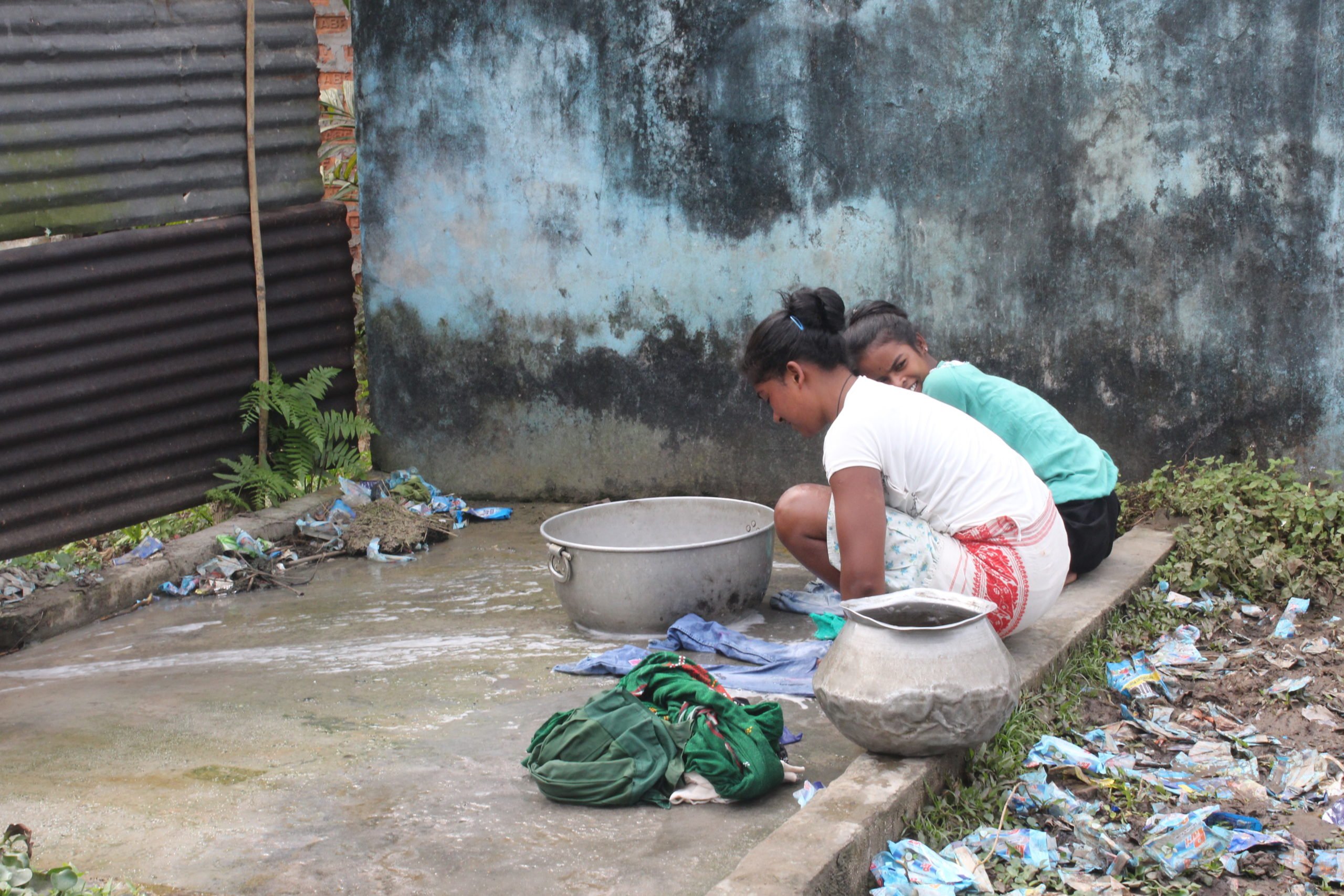 Girls wash clothes on a platform close to the pond (Image: Sanskrita Bharadwaj) 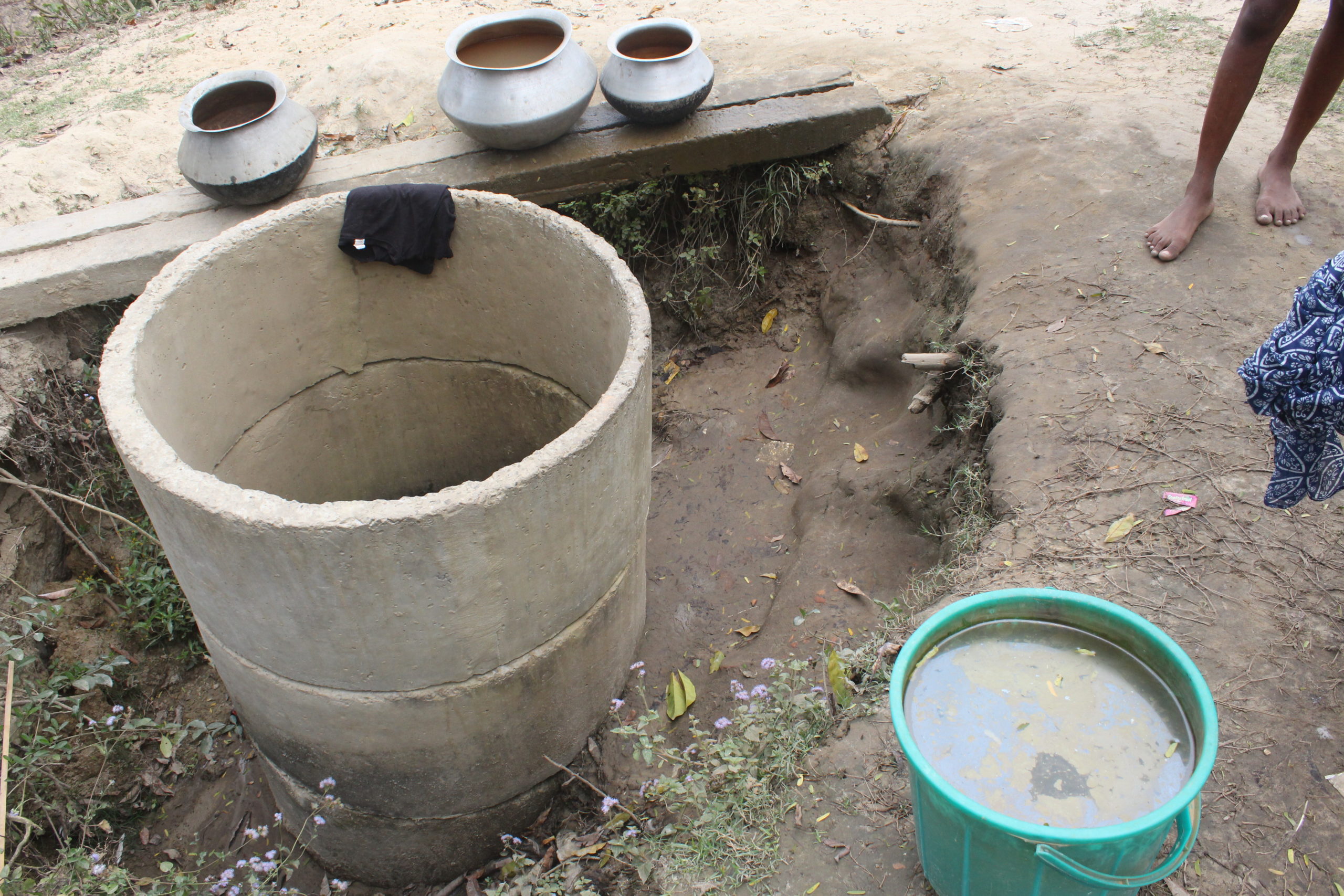 A ring well near Letekujan tea estate. The water from the well is contaminated (Image: Sanskrita Bharadwaj)

In 2019, the Indian government announced that by 2024 it aims to provide safe and adequate drinking water to all households in rural India through plumbed connections under its flagship scheme, Jal Jeevan Mission.

Previously the tea garden authorities were expected to provide water in the gardens, said Siranjib Saikia, chief engineer in the public health engineering department of Assam. “But now the government’s Jal Jeevan Mission aims to provide all villages with piped water supply,” he said.

Saikia explained that the government has identified priority areas to provide water connectivity in two phases. First priority has been given to arsenic and fluoride-prone areas. These areas were supposed to be taken care of by March 2021, but progress on this was delayed by the pandemic work.

Other priority areas in Assam include those with high incidence of acute encephalitis syndrome and Japanese encephalitis. The exact causes of these life-threatening diseases are complex but they tend to be contracted in humid, unsanitary environments.

“A lot of tea gardens fall under areas affected by these issues, so those gardens will be covered as well within the next two years,” Saikia said. “But manpower and resources are needed to accomplish these tasks. Assam has a shortage of plumbers and this is essentially entirely plumbing work.”

If schemes such as the Jal Jeevan Mission are implemented on time, they could improve the lives of hundreds of thousands of people in tea garden areas such as Letekujan.

“The problem with hand pumps, ring wells [wells lined with ceramic pots] and tube wells is that people are still drinking groundwater. With a piped supply, the water will be filtered and this will in turn improve people’s health,” the public health worker said.