The immersion of idols to mark the end of Durga Puja festival continued to pollute the Ganga this year in Kolkata – the epicentre of the annual event. Covid-19 distancing norms, National Green Tribunal directives, a notification by the West Bengal government – all were flouted. But among the thousands of neighbourhood groups that organise the festival, one stood out by opting for a ‘green immersion’.

In the biggest annual festival in West Bengal, nearly 37,000 Durga Pujas are held in the state every year, more than half of them in the state capital Kolkata. Every year, environmentalists point out that the immersion of idols at the Hooghly – the westernmost distributary of the Ganga – leads to serious water pollution. The clay idols are covered in toxic paint and many of the accessories are plastic. Every year, the pleas are ignored.

An official of the Kolkata Municipal Corporation (KMC) said this year they had placed cranes at three of the 17 immersion spots along the riverbank to remove the idols before they dissolve. Nearly two-thirds of the 15,000 idols were immersed at spots that did not have any such arrangement.

“We find the system of immersion is not adequate as per NMCG (National Mission for Clean Ganga) guidelines in most of the KMC ghats (immersion spots), particularly the north Kolkata ghats,” an official from the State Pollution Control Board said during the immersion process on October 19.
Expressing helplessness, a state government official said, “There is a lot of public sentiment involved. You need awareness and social acceptance. Just policing will not do.”

There are five idols in a Durga Puja – Goddess Durga and her four children. “Just imagine the number of idols being immersed in the Hooghly and other rivers and the enormity of the pollution load being generated as a result. You have a disaster in your hands,” said environmental activist Subhas Datta, who has gone to court a number of times seeking ‘green immersion’.

Tridhara Sammilani, a neighbourhood club in south Kolkata well known for its lavish celebrations, stood out this year by creating an artificial pond lined with plastic sheets to hold the immersion next to the marquee where the Puja had been held. 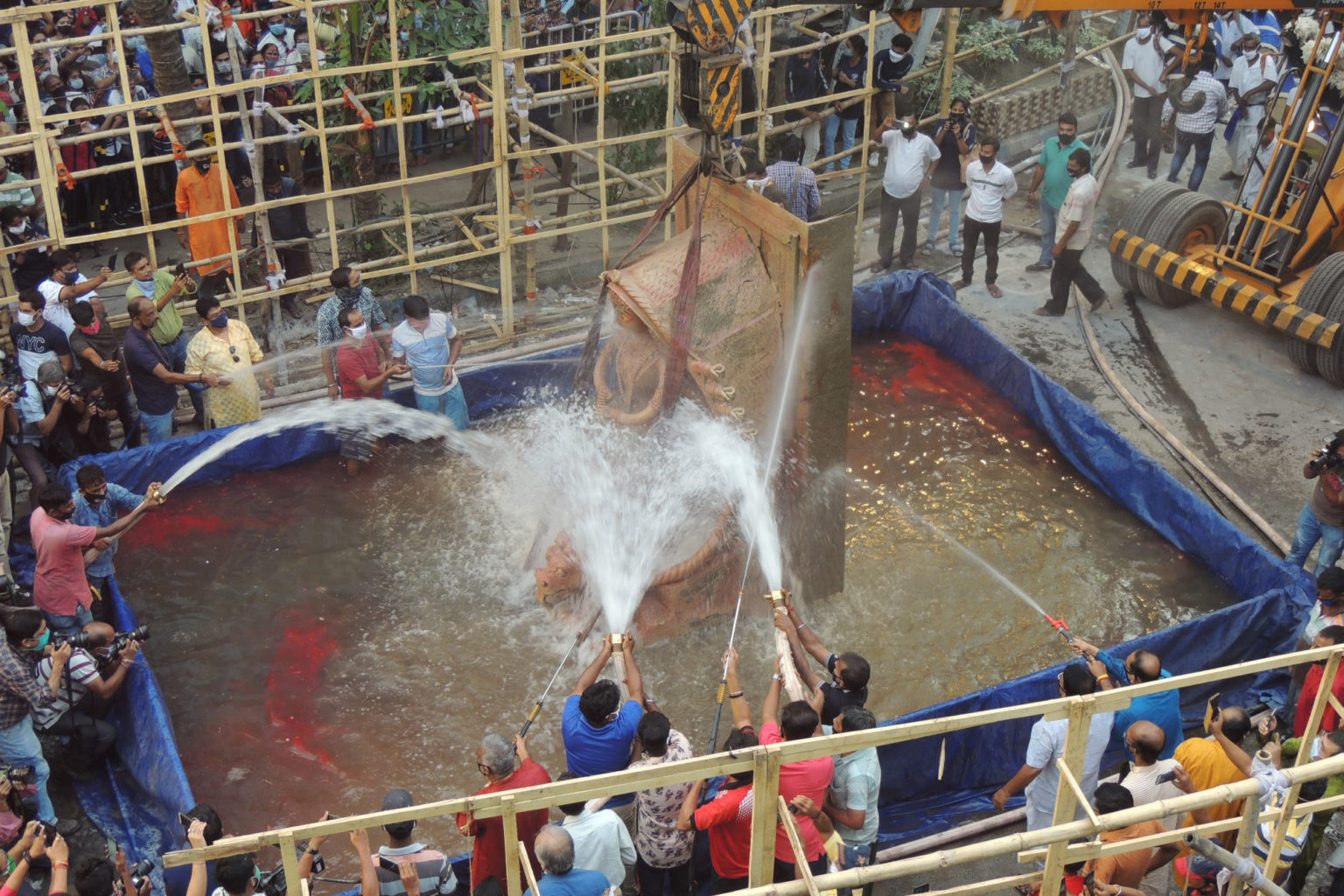 They moved an idol there with a crane, and trained multiple water jets on it. Once the colours washed off and the clay melted, the same water was used for the next idol. The two-hour process took around 25,000 litres of water.

“We were under various pandemic-linked restrictions and risks related to the conventional immersion in the Ganga, so we decided on this unique mode,” said Debasish Kumar, a club official and a member of the KMC board of administrators.

As a KMC official, Kumar is in charge of immersion arrangements for all of Kolkata. He hoped that in future other clubs would opt for a ‘green immersion’ as well.

Some supporters of immersion in rivers say it is part of the Puja rituals, but priests disagree. “There is no religious bar to such green immersions. Once darpan bisarjan (through which the goddess is bid farewell to the accompaniment of sacred texts) is completed, the immersion is technically over,” pointed out Ramnath Bhattacharya, a senior priest who has been conducting a Durga Puja every year for over two decades. Former Sanskrit College teacher Himangsu Pandit, linked to the almanac through which Puja timings are fixed, found no fault with the green immersion model either.

A few other green immersion models were attempted in West Bengal this year. “Following the NMCG guideline, we have set up a dedicated and barricaded immersion zone within two large water bodies in South Dumdum municipality, adjacent to Kolkata Municipal Corporation, to ensure an environment friendly immersion,” Kalyan Rudra, chairman of West Bengal Pollution Control Board, told The Third Pole. “The base of the water bodies have been lined with a synthetic material so that the diffused pollutants can be arrested.”

The pollution control board took its cue from New Kolkata Development Authority (NKDA), which has been pursuing this model in the northern suburbs of Kolkata for a few years now. According to NKDA chairman Debasish Sen, idols are immersed through specially designed ramps with stairs on both sides, and subsequently pulled back from the water using cranes.

Municipal authorities at Chinsurah near Kolkata laid down rails so that idols can be rolled down to the Hooghly easily, and then removed quickly with the help of cranes.

Hope for a greener future

Environmentalists are hoping green immersions will become the norm in future years, especially since NMCG directives and court verdicts mandate it.

“It’s a very good initiative and we will be happy to support in expanding it in future if Kolkata Municipal Corporation wants,” Rudra said.

Firhad Hakim, chairman of board of administrators in KMC and former mayor, told The Third Pole that KMC would consider expanding the ‘wash and melt’ model in coming years.

But so far, these ecologically friendly immersions account for a miniscule minority in Kolkata. And it’s worse in other parts of the state, “where hardly any system exists for environment-friendly immersion as per norms,” said Biswajit Mukherjee, a former chief law officer with the state’s environment department.

The effect on water

“In earlier years we found that the concentration of toxic heavy metal pollutants like lead used to increase almost four times due to immersion, and the figure was around 37 times above the World Health Organisation (WHO) safety limit,” said Krishnajyoti Goswami, a professor at Lincoln University College in Petaling Jaya, Malaysia. He analysed the immersion-induced pollution in the Kolkata stretch of the Hooghly from 2015 to 2017.

An internal study of the West Bengal Pollution Control Board in 2015, seen by this reporter, revealed that concentration of some highly toxic heavy metals in river deposits increased by as much as 148% after immersion. At an immersion spot in Kolkata, the concentration of lead was found to increase about 51%.

“Do not forget, this water comes back to us as drinking water. Our water treatment process does not have a system to filter these heavy metals,” said Arunabha Majumdar, former head of environment sanitation at the All India Institute of Hygiene and Public Health.

India’s National Green Tribunal has been pushing to stop immersions along open stretches of any river. “Idol immersion points should be cordoned off and barricaded. Synthetic liners may be placed in the bottom well in advance,” reads an NGT order of October 6, 2017.

The order mandated that idols be made from natural materials rather than baked clay or plaster of Paris. It said painting of idols should be “totally discouraged”, or water soluble and nontoxic natural dyes should be used. It also said flowers, cloth and decorating material should be removed before immersion.

In 2018, the environment department of the West Bengal government published a notification reiterating the NGT directive. But clearly, there have been few takers. “We found that apart from flowers, other materials like coloured ornaments etc. are not being removed from idols,” a state pollution control board official observed during the immersion ceremonies on October 19.

Death comes before justice for Koshi flood victims in Nepal