Iram Mohsin, a resident of Lahore, had been dreading the coming of winter this year. Amid the second wave of Covid-19 which has gripped Pakistan, the city is wrapped in a blanket of smog.

“The air has a metallic smell, the skin feels itchy and there is a gritty feeling of dust settling upon us,” Mohsin related. “There is a very visible brown haze, blurring the skyline; it’s like looking at an old sepia photograph.”

The school principal had not expected anything better after what she said was the “complete disregard for taking precautions against coronavirus and the onset of smog since October”. She is witnessing colleagues and family “having serious breathing difficulties”. 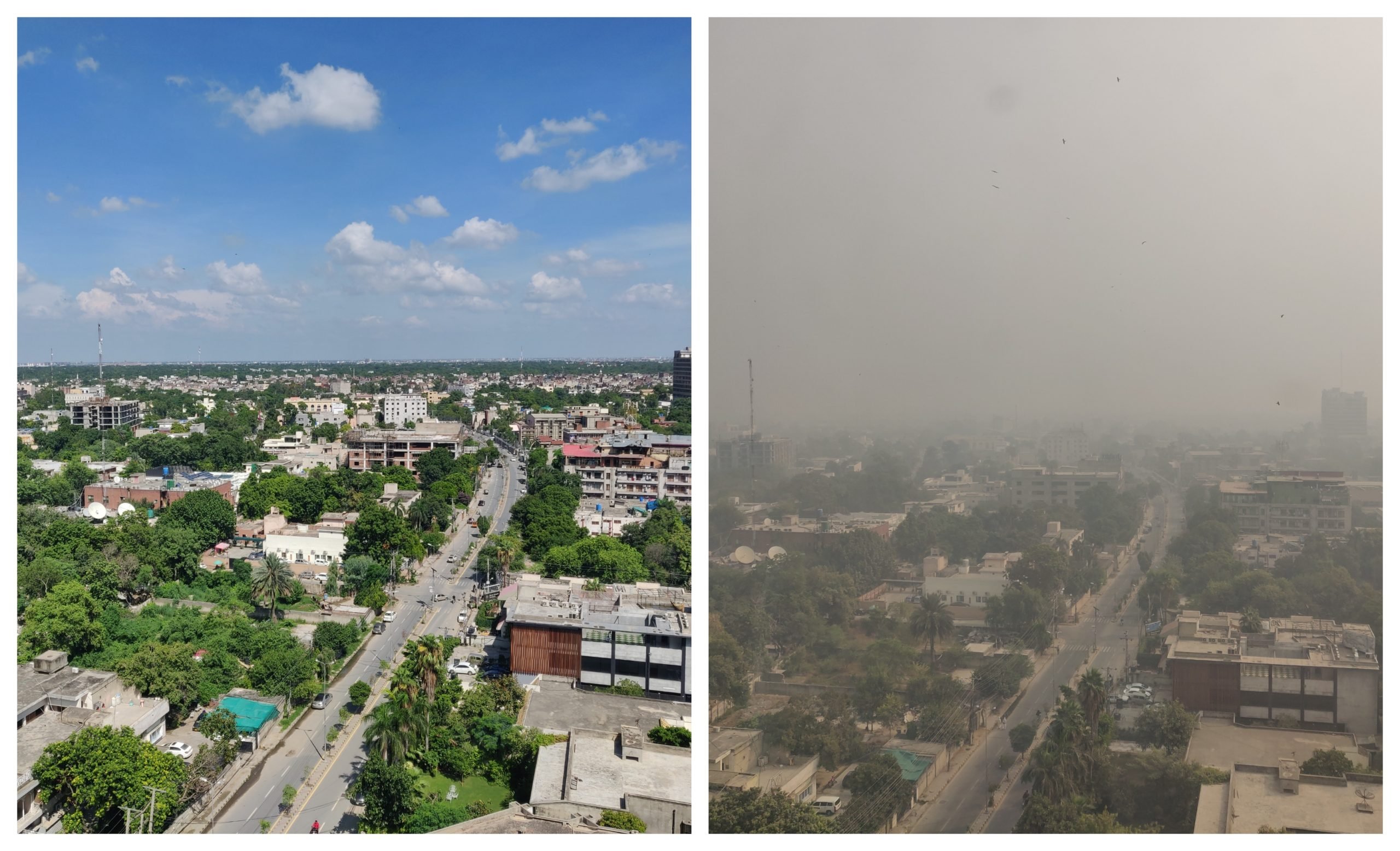 Pictures taken by a resident show the view from an office in Main Boulevard Gulberg Lahore in (L) July 2019 and (R) November 2020. [image by: Ahmed Muzammil

The air quality index (AQI) of Lahore and Faisalabad was worse than New Delhi in neighbouring India in early November. Faisalabad recorded 440 and Lahore 321, with a fine particulate matter (PM2.5) concentration of 270 micrograms per cubic metre (μg/m³). Particulate matter smaller than 2.5 microns is particularly dangerous because it is fine enough to penetrate into the lungs and bloodstream. The World Health Organisation guideline is 25 μg/m³ for PM2.5, the state government’s is 35 μg/m³.

Pakistan’s Space and Upper Atmosphere Research Commission (Suparco) found 28 of the 36 districts in Punjab were witnessing increasing levels of smog this November. The US embassy, which puts out real-time AQI data, has been showing consistently poor numbers.

Dawar Butt, analyst at the Centre for Research on Energy and Clean Air, said, “For any AQI above 300 – which is hazardous – the protocol is to raise warnings if it stays the same for more than an hour.” But there was no warning, just advisories on the government website.

The Environmental Protection Agency has only three monitors in the city, while Butt said there should ideally be at least 30. Unfortunately there was doubt even about the information from the three that existed. “Lahore’s central part (Jail Road) is among the most polluted, but somehow the PM2.5 levels there are much lower than the outskirts.”

Khurram Shehzad, director general of the Punjab Environment Protection Agency (EPA), remained confident about the authenticity of the “data calculated by experts from the highly sophisticated government monitors”. He was optimistic this year’s smog would be less deadly than before.

“We know stubble burning has continued despite the ban, so we share the heat maps sent to us by Suparco with the deputy commissioners of those districts to take immediate action,” Shehzad said. In the first week of November, Suparco pointed to 1,290 areas where stubble burning was going on.

This was corroborated by journalist Farahnaz Zahidi. Driving through Punjab, she saw “huge swathes of fields belching thick smoke”. Visibility was poor, even in the day time, she said. “We could not roll down our windows due to smog so had to switch on the air conditioning.” 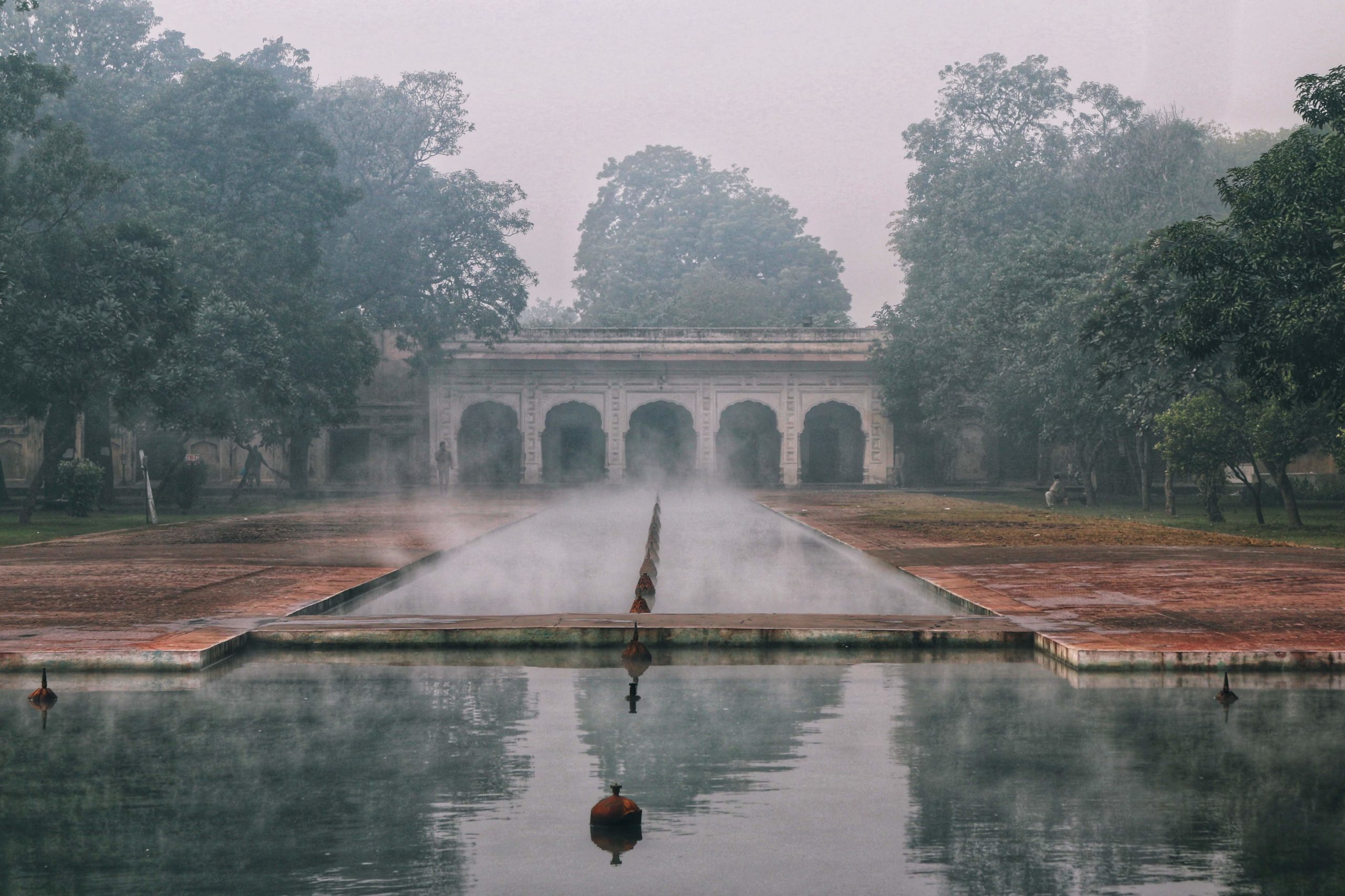 Another photo of the Shalimar Gardens in Lahore from December 2019 [image by: Nida Sohail Chaudhary]

The government has sealed 366 factories found running without any environmental control systems (ECS), informed Shehzad. “We also closed down an additional 140 factories that were using plastic and rubber as fuel.” There are factories that have ECS but do not turn them on. “To keep a check on them, we have installed CCTV and can keep an eye on them from our offices,” Shehzad said.

Of the 7,530 brick kilns in the area, 1,268 have been converted to the energy-efficient zigzag technology that reduces the use of coal by around 20%. Over 5,200 kilns have been ordered to close down till December 31. However, many continue to operate as nearly 80% of the construction in Punjab use bricks. The kilns employ nearly 2.3 million daily wage earners.

Health experts have noticed a serious increase in respiratory diseases, eye infections and allergies in Lahore in the past four years. Research has also shown that polluted air causes depression, Alzheimer’s and even poor academic performance.

“Lungs get damaged from pollutants, including smoking, and become vulnerable to any kind of bacterial, viral or fungal infection,” said Naseem Salahuddin, head of the infectious diseases department at Indus Hospital. She warned that those with weakened lungs are more likely to be infected by Covid-19.

Lawyer Khalid Ibrahim, an avid golfer, who has asthma, has had to put away his golf clubs this season. “Fall and winter are the best time for golfing in Lahore,” he said. But his “throat feels sore” and he “can smell soot”.  The air purifier that he bought last year for about PKR 40,000 (USD 254) has really helped. “I sleep much better now.”

Hassan S. Zaidi, a 32-year old computer engineer, has installed eight air purifiers in his Lahore home, all made by him. “I was worried for my two daughters and my parents,” he said. He has been using these purifiers for three years now. “All I do is change the filter annually.”

Word got out and Zaidi started making purifiers for friends. “Last year I put up a hundred of them at a friend’s shop and they were a complete sell out,” he told The Third Pole. He ended up selling nearly 1,000 last year at the PKR 16, 000 (USD 102) each. This year, he is expecting his sales to increase by 40% due to Covid-19.

While crop burning and brick kilns are blamed for air pollution, Momin Imran Sheikh, a microclimate expert, pointed out that the main reason in cities like Lahore, Faisalabad, Multan, Bahawalpur, Gujranwala and Rawalpindi was emissions from vehicles.

Shehzad of EPA said since October, Lahore traffic police had impounded over 700 vehicles and collected a fine of PKR 2.5 million (USD 15,865) from smoke spewing vehicles.

For years now, the Punjab government has been planning to issue fitness certificate to vehicles plying on the roads. A Swedish vehicle fitness certification company, established in 2016, was tasked to set up centres across all 36 districts of Punjab but it remained dormant. Last week, Punjab Chief Minister Usman Buzdar asked the transport authority to reactivate the system.

“They’re always announcing vehicle inspection systems but I’ve never seen one materialise,” said environmental lawyer and Lahore resident Rafay Alam Khan. He does not have a certificate for his car either.

Garbage burning is another pollution source in Lahore, Sheikh pointed out. “It’s banned, but continues unabated.” Nearly 6,000 tonnes of garbage is collected in the city daily. Little gets to Lahore’s only landfill site, which has reached its capacity anyway.

While acknowledging that crop burning continued in Pakistan, an EPA spokesperson said the problem was “200 times worse” in adjacent parts of India, and this was “affecting us” because the wind blew across the border.

Sheikh, however, pointed out that in autumn, the wind blows from the north-west to the south-east, from Pakistan to India.

Opinion: Cooperate to save biodiversity in Hindu Kush Himalayas

Asian development banks are most exposed to biodiversity risks