Kalyskan Aitykeeva, a 57-year-old resident of Gulbakhor village, said the smoke-ridden air is a “time bomb” for her family. This has been the case since at least 2018.

“Adults in my family always wear masks to protect themselves from the poisonous air. But you’re not going to force your nephews to constantly wear them, are you? They want to play outside, which means that they inhale this polluted air. Then they constantly cough in their sleep because their throats are clogged with dust and fumes,” she told The Third Pole.

Communities living along the Kyrgyz-Uzbek border have repeatedly requested authorities to document the health impacts linked to pollution coming from two large cement plants in the district of Aravan, southwest Kyrgyzstan. But in the absence of official data on pollution, officials have dismissed the concerns of nearly 130,000 people spread across the 1,300 sq km district.

Another village aq-saqal (elder), Abdurakhman Ava, said the smoke and smog are killing his trees. “The leaves on the apricot and apple trees wither and curl as if they are hiding from fire. I tried using fungicides on them, but it’s useless.”

Villagers who spoke with The Third Pole allege that the pollution comes from two cement factories, collectively called the Aravansky Cement Plants. The companies, Sinzhi-Pirim LLC and Southern Building Material Combiner LLC (also known as Yuksm) send finished products for export to Uzbekistan and Tajikistan. Sinzhi-Pirim LLC belongs to one of the richest entrepreneurs in Kyrgyzstan, Berdibay Primov, whose son Ulan Primov is a member of parliament. Yuksm is owned by the deputy of parliament, Azamat Arapbayev, whose family hails from an influential clan in the south of the country. While both are owned by Kyrgyz businessmen, these plants function with the backing of Chinese investors. Neither company responded to the reporter’s requests for comments.

Together the two companies employ over 1,000 people, the majority of whom are locals – a reality that complicates the struggle of the larger community as some fear complaints will cost them their jobs. 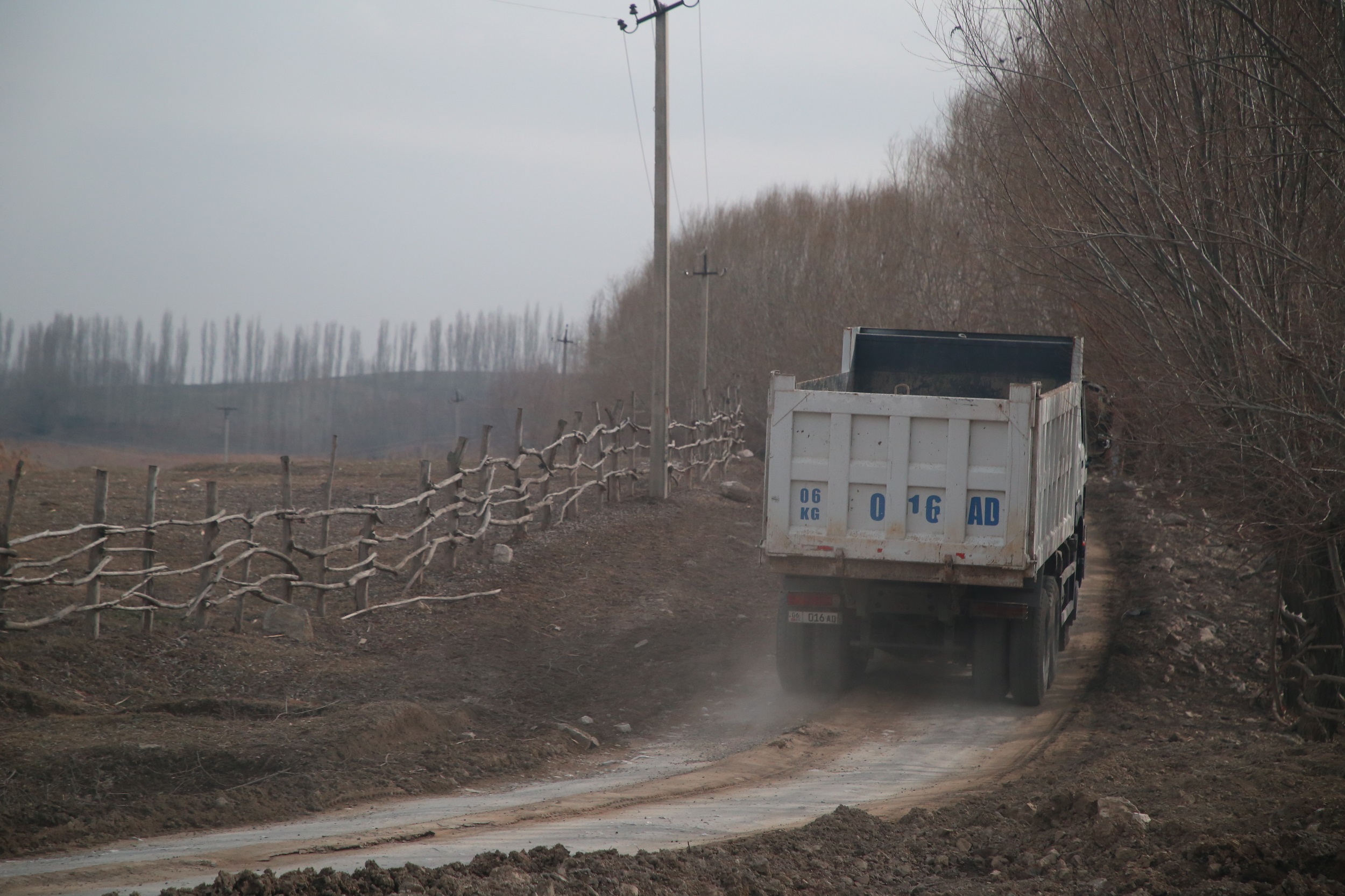 A truck heading towards a quarry, from where raw materials are delivered to one of the cement plants in Aravan district. Truck drivers are locals who declined to provide comments to The Third Pole’s reporter out of fear of losing their jobs. (Image courtesy of the author)

An official confirmed that the companies were shut down for three months in 2018 for violating environmental regulations. Rysbek Yusupov, the head of Kyrgyzstan’s environmental inspection committee for Aravan and Nookat districts, said: “A few years ago, we issued orders for the closure of Yuksm LLC. But after managers installed cleaning filters and additional mechanisms there, the pollution and waste stopped.”

According to Yusupov, the plants were shuttered when they were found to be working with bulk substances and cement that used “Chinese-made aggregates that could not trap dust”.

“In 2019, they were replaced with Russian equipment,” he said, adding that the companies installed equipment that “stopped dust emissions into the atmosphere”.

Another official from the Kerme-Too district, Suyunbai Gulzhigitov, said that “monitoring during the last two years did not reveal any environmental pollution”.

He said action can only be taken if the government agencies tasked with overseeing the operation of cement plants raise the issue. “If [one of them] has official documents confirming the pollution, we [can] take certain actions to protect the local population from harm,” he said. 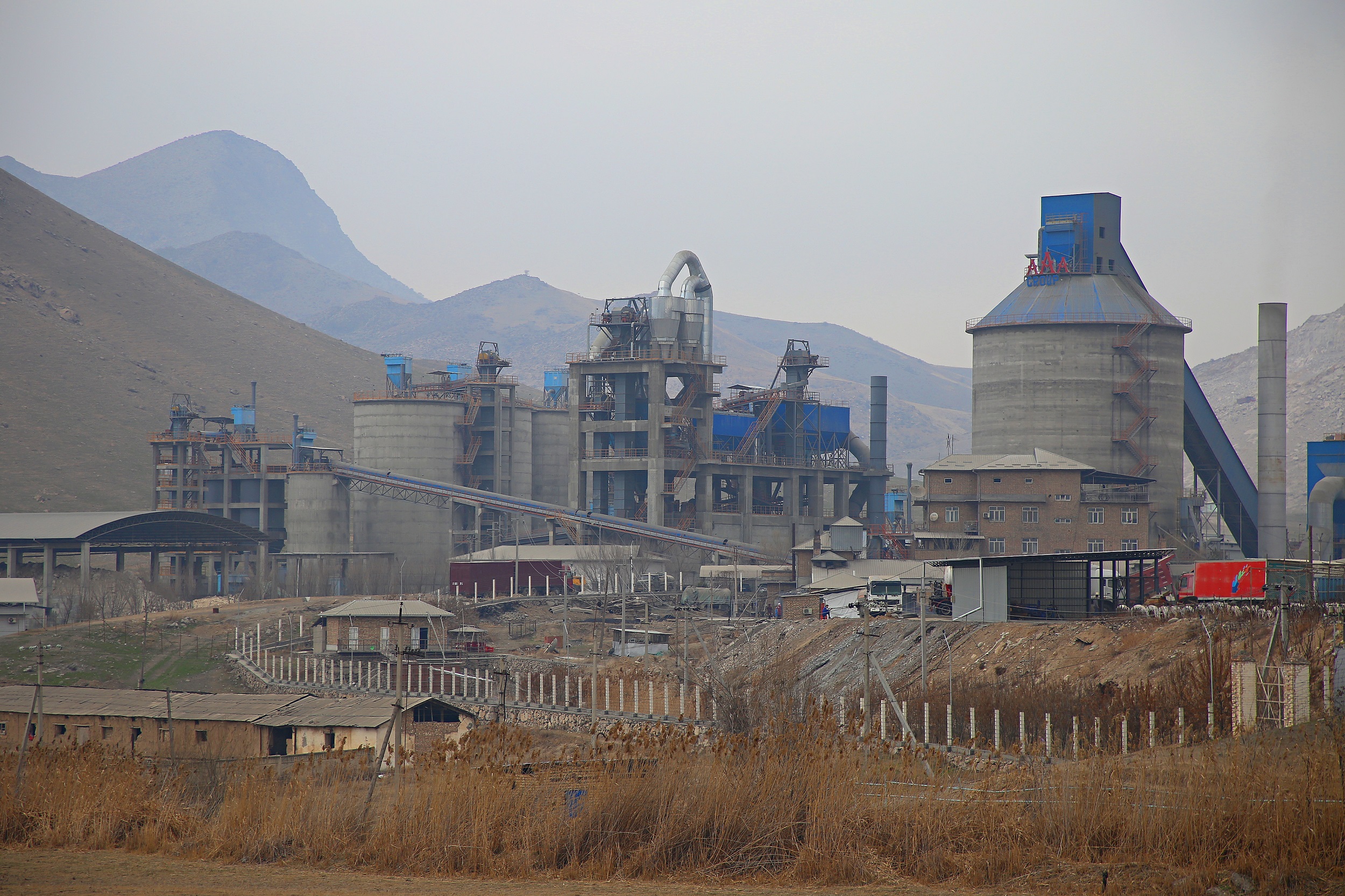 The Yuksm cement plant in Aravan district. (Image courtesy of the author)

Members of the community said repeated appeals to the government have yielded no results, and the message they have received is that authorities have no desire to pay attention to such “small-scale problems”. Yusupov, too, dismissed the complaints as “false rumours” which spread because the population “lacks education”.

As a result, the nightmare continues for these communities, who can only share anecdotes of their health problems in the absence of pollution data and medical reports. Many of them link the dirty, smoky air, particles of which settle on soil and water, to miscarriages, lung disease and cancer. One cement plant worker, speaking on condition of anonymity, also said he believed the waste from the factories polluted the eastern part of the Aravan district, though he was unable to present evidence.

“I’m just a worker here, but by local standards, my wage isn’t bad,” he said, adding that he earns 20,000 Kyrgyzstani som a month (around USD 240). In Kyrgyzstan, average monthly salaries range from USD 150-250. “We’re also given work clothes and food by our employer, so my colleagues will never dare to complain because we could be fired immediately, and then we’ll have no livelihood,” said the cement plant worker.

Omurbek Bakirov, a member of the legislative assembly, said the issue was raised in Parliament and the factories fitted cleaning filters into the pipes. “But we have no guarantees that these changes improved air quality, because people wouldn’t be complaining now the way that they are otherwise.”

In the upcoming session, Bakirov intends to call on his colleagues to support his idea of the creation of a foundation to compensate villagers.

“This money could be used to improve the infrastructure of the villages in the Kerme-Too rural community. The administration of the two factories already gave preliminary agreements to pay 1 million som [USD 11,900] a year into the local budget and to pay a sponsorship of 2 million som [USD 23,800],” he explained, expressing hope that the directors of the factories would keep their word. 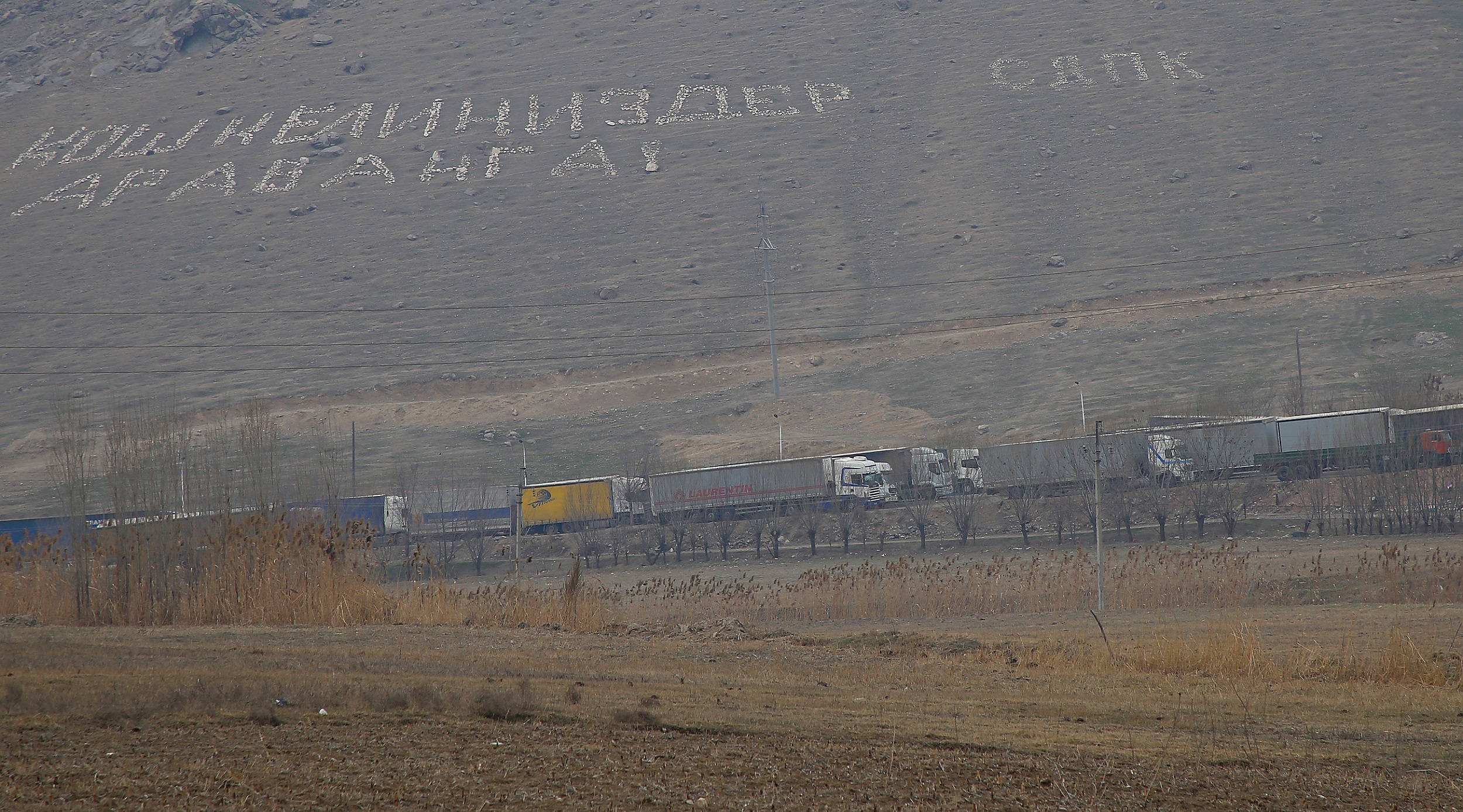 Trucks line up to load cement from the Yuksm Aravan plant. The inscription on the mountain reads “Welcome to Aravan”. (Image courtesy of the author)

However, Anarkan Kamalova, from the village of Achii, said compensatory payments are “useless” in a situation where the health of locals is worsening by the year, and that this money will not help them to cover medical costs.

“We breathe in this rubbish without thinking, and then young women have miscarriages, the elderly develop bronchial asthma, children develop allergies, and rashes appear.”

A study published by the National Center for Biotechnology Information in 2018 found links between exposure to emissions from cement plants and respiratory diseases.

“An excess risk of cancer incidence and mortality in both children and adults mainly concerning respiratory tract cancers was also reported in some studies. Higher values of heavy metals and of a biomarker of renal [kidney] toxicity were found in the exposed compared to unexposed populations,” the review said. In the US, the Environmental Protection Agency has noted that the cement sector is the third-largest industrial source of pollution, and linked emissions to health and environmental problems.

Araphat Isamidinova, a doctor at a private clinic in the Osh region, said cement factories in Aravan district leave “a trail of pollution in the form of aerosol dust” despite filtration.

Isamidinova said emissions of harmful substances enter the atmosphere during the preparation of raw materials, crushing and transportation.

“Do you think people just complain [for the sake of complaining]? Of course not,” she said. “Industrial emissions negatively affect health and become sources of pulmonary [lung] diseases, and from there comes infection of the digestive, nervous, endocrine [hormonal] systems, gradually leading to cancer.”

According to activist Roza Mendybaeva, Aravan-based activists and independent ecologists from Bishkek are planning to take air, water and soil samples to assess their pollution levels.

“Then we’ll be able to prove that it is these cement factories that are the main source of the pollution of the local environment and the illnesses of the local population,” Mendybaeva said.

As the community waits for evidence, officials remain adamant that the pollution is not coming from the cement plants.

Suyunbai Gulzhigitov claimed that the biggest reason for the smoke-ridden air is not the pollution from the cement factories, “but the intensive burning of low-quality coal by locals during the cold season”.

“It is a sin for people to be complaining about the factories’ operations where almost 90% of the local population works,” he said, hailing the efforts that Sinzhi-Pirim LLC has made to “build a sports ground for schoolchildren, repair roads and bring food to disadvantaged families”.

Editor’s note: Sources’ names have been changed to protect their identities

An asthma patient in every house

In Kyrgyzstan, toxic dust from lead dumps blows across region