Ogulkan Seitova has a constant headache. Her husband has a heart condition and all her five children suffer from tooth decay. Seitova, 46, lives in the village of Sovetskoe, in the south-western region of Batken, Kyrgyzstan.

Near the village are two sites used to store waste from lead and zinc mining. Their sandy surface is red and spread over 25 hectares. Children play football here and swim in the nearby lake, and cattle graze. With the slightest wind, dust from the mine tailings covers the village. 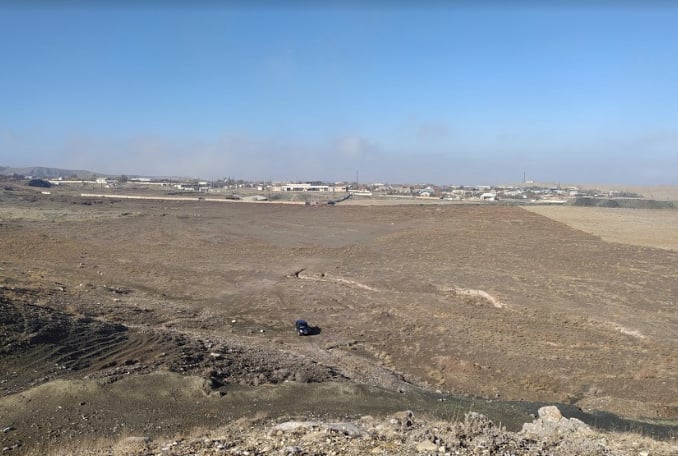 Sovetskoe, home to around 1,300 people, is in the Ferghana Valley, a densely populated 22,000-square-kilometre area of fertile land shared by Kyrgyzstan, Tajikistan and Uzbekistan. But the village is being poisoned by its toxic legacy from the Soviet era, with wider consequences for the valley and its people.

The area around Sovetskoe is rich in lead and zinc ore deposits, mining and processing of which started in the 1930s. In 1971, the industry was shut down, with mining waste disposed of in two sites: the largest is on the edge of the village, the second 3-4 km away.

Lead is a toxic metal that accumulates in the body. Symptoms of lead poisoning in adults include headaches, memory loss and abdominal pain; children are particularly harmed. Exposure causes damage to the developing brain and nervous system, resulting in lower IQs and behavioural problems. There is no safe level of lead exposure, according to the World Health Organisation.

In Sovetskoe, poor management and lack of regulation at the sites have led to large-scale environmental pollution. For years, exploiting the waste sand has been big business, used in construction both by the local population, as well as people in neighbouring countries – all unaware of the hazardous nature of the contaminated sand.

‘Our future is in danger’

Between 2018 and 2020, a team of researchers at the Institute of Medical Problems, a Kyrgyz research institute and treatment provider, studied 322 children in Sovetskoe’s schools, where 80% of the children travel from surrounding areas.

One in three children worldwide have high blood lead levels (about 800 million children).

The children were examined for signs of disease by paediatricians, endocrinologists, gynaecologists, neuropathologists, gastroenterologists, surgeons, orthopaedists, cardiologists and other specialists.

The study found that 89.4% of the children had tooth decay (lead exposure is known to be associated with oral health problems). Enlarged thyroid glands were recorded in 6.8%. Of sexually mature girls, 32.4% had disrupted menstrual cycles. In 15.8% of girls, irregular bone structure of the thorax was observed. Two cases of mental disability were identified, and one of mental illness.

Zamirbek Dosatov, a teacher, said, “We consume water from the spring and well. The water hardness is very high and it exceeds the norm by 1.7-1.9 times. The water contains high concentrations of lead and zinc and is considered to be non-potable in terms of water quality standards.”

In 2016, Pure Earth, a non-profit organisation that works to solve pollution issues in the developing world, tested blood samples from 220 children in the village. It found that lead concentrations were higher than normal in 89%, and 90 children were at risk of lead poisoning.

“Lead has a hazardous effect on mental development, endocrine and skeletal systems. The schoolchildren’s academic performance is very low. There is a high incidence of childhood disability in the village. Our future is in danger and we need help,” Dosatov told The Third Pole.

Across Kyrgyzstan, on average roughly 1.41 in every 1,000 people receive disability benefits. In the region of Batken, where Sovetskoe is located, this is 1.75; the village’s district of Kadamjay has an incidence rate of 2.12. And in Sovetskoe, the figure is 3.00, twice the national average.

Gaza Osmonova, the head of the village’s local council, told The Third Pole that 34.8% of the local population live below the poverty line, with 30-35% being unemployed.

Osmonova added that the local chief doctor is a dentist, and that patients have to go to district or regional hospitals for specialist medical care. With Sovetskoe 90 km from the district centre, the journey can take around two hours.

Ogulkan Seitova, the 46-year-old resident, said, “We would like to move to another place but we cannot because we have no money to buy a house or flat.”

Local ecologist Nuriza Mamazhunuskyzy said that due to climate change, storms have become more frequent in the region in recent years. Windstorms raise dust from the surface of the lead waste sites and spread it throughout the Fergana Valley, polluting the soil. The heavy metals can also be washed by rain into the rivers of the Fergana Valley.

And Sovetskoe is not the only source of this type of pollution. “The lead tailings in Sumsar [a village in the west of Kyrgyzstan] are larger,” said Indira Zhakipova, Pure Earth’s country coordinator in Kyrgyzstan. Zhakipova added that it is difficult to comment on evidence that lead poisoning is causing health problems across the Fergana Valley. “But there is a risk of lead entering the water cycle in Sumsar, which is located along the Sumsar river,” she said.

The Institute of Medical Problems next plans to study the concentration of lead, zinc and other heavy metal salts in glaciers, soil and water 150-200 km from Sovetskoe (including in neighbouring countries), taking wind patterns into consideration.

A Pure Earth project, which was completed in 2017, involved removing piles of sand from the village and educating parents and children about the dangers of playing in it. The NGO also installed water filters in the village. Osmonova, the head of the village council, said, “We now need to change the filters, but we don’t have funds.”

“Our village is a high-incidence area, there are practically no healthy people,” she added. 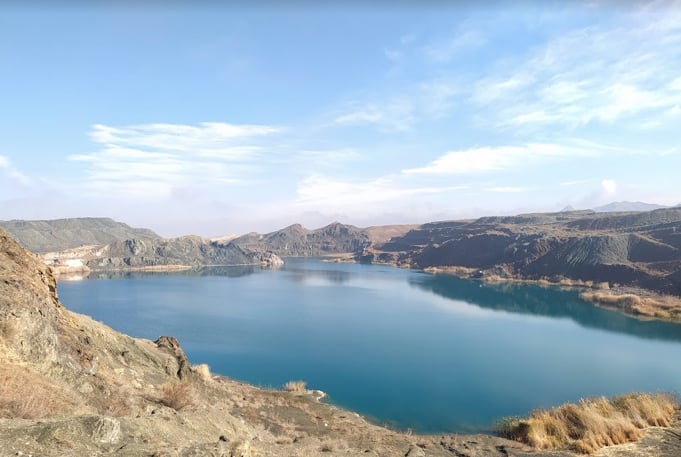 This lake covers an abandoned lead-zinc mine. Residents of Sovetskoe swim here every summer; they do not know that toxic metals leach into the water of the lake [Image by: Rakhmanbek Toichuev ]

The villagers say a long-term solution for the village and the wider region is needed: to bury the tailing pits, put up fences around the burial sites, plant greenery and introduce drip irrigation to help livelihoods.

However, the permanent coverage and closure of the sites is a substantial undertaking – with estimations for the work running to millions of US dollars and falling under the remit of Kyrgyz government’s Ministry of Emergencies.

“[The Ministry of Emergencies] has our recommendations [to cap the tailings], they have this task in their plan but they do not have budget for this activity,” said Pure Earth’s Zhakipova. “For now, we are in the process of seeking support for projects.”

EU green dream is a harsh reality for metal-rich countries