At least twice a week, Monika Deka makes a trip to the 30-foot-tall, bright blue water ATM on the border of the villages of Kothora and Barigaon in Assam, northeast India. Rubbing sanitiser over her hands, she swipes a prepaid card on the screen of the water-dispensing machine.

A firm push of the button, and 20 litres of water flows down from one of the three outlets into a container she has brought. “I cannot do without this water. I even carry it with me while visiting [others],” said Deka, who is the head of the gram panchayat (locally elected village administration) in Barigaon. 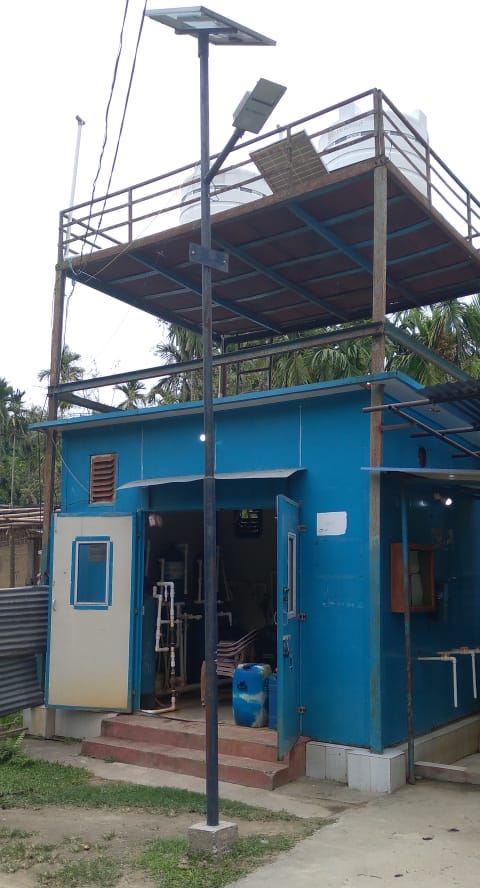 The water-dispensing plant sits on the border of Kothora and Barigaon villages (Image: Sashanka Bezbaruah)

The water ATM was installed in 2017 by Gramya Vikash Mancha (GVM), an NGO, in collaboration with the Tata Water Mission (TWM).

Before the installation of the water ATM, Deka’s water came from a tube well. This pumped up groundwater that contained dangerously high levels of arsenic.

Arsenic is a threat to public health across Assam, affecting over 1.6 million people according to the Ministry of Jal Shakti, which oversees water and sanitation. Contaminated wells are marked with red paint to warn people, but without alternative water sources people like Deka have to continue using them.

Over the years, warts developed across the palms of Deka’s hands. She experienced stabbing chest pains, and started taking Omez and Pan-D – medicines to help with gas and digestion – almost daily. On some days, when the medicines didn’t help, she had to rest and avoid household activities. People in her community were diagnosed with cancer; one with oral cancer and three with gallbladder cancer. Warts on palms, abdominal pain and cancer are all conditions caused by arsenic poisoning.

Water that contains arsenic at a concentration above 10 micrograms per litre should not be drunk, according to the World Health Organization. Surveys conducted by GVM found that tube wells in and around Barigaon contained 240 micrograms of arsenic per litre.

In February, Rattan Lal Kataria, the minister in charge of water resources, told the state assembly that there are 1,247 arsenic-affected habitations in 12 of Assam’s 34 districts. (The Indian government defines a habitation as a group of 10-100 households.) Nalbari district, where the villages of Barigaon and Kothora are located, is the most affected by arsenic poisoning in Assam, with a total of 454 habitations.

Arsenic occurs naturally in Assam’s aquifers. The Brahmaputra carries iron oxide particles chemically bound to arsenic down from the Himalayas. “The iron oxide particles are broken down by microbes as they scavenge iron, releasing arsenic into the groundwater,” said Achintya Bezbaruah, an associate professor of civil and environmental engineering at the North Dakota State University in the US.

Community in charge of water ATM

Deka is a common name in the area; those interviewed for this article are not related

Bhaben Deka, a villager from Barigaon, is one of the 16 members of a water management committee. Once a month, the committee assembles to resolve issues regarding the distribution of water. 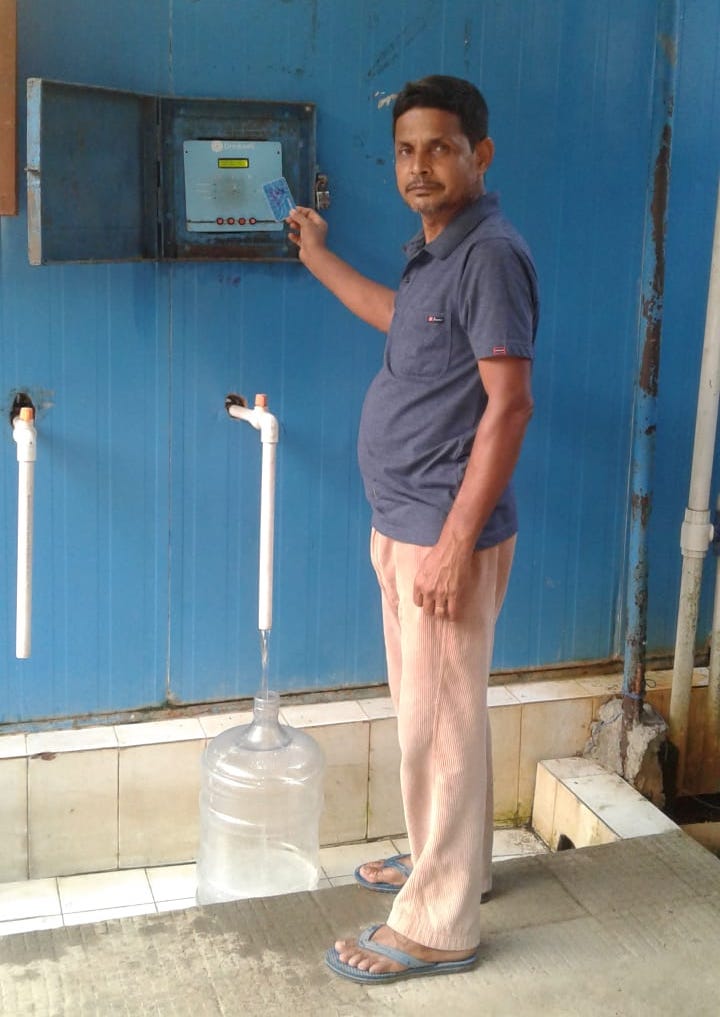 Users of the water ATM can choose to pay 30 Indian rupees (USD 0.4) for 20 litres, or a flat monthly fee of INR 210 (USD 2.82). The price was reached by consensus. “We asked the villagers on the price that suited their budget,” said Bhaben Deka. There are six poor families that do not have to pay to use the ATM; one family lost their breadwinner to cancer.

Bhaben Deka also arranges for water to be delivered to the homes of those who have difficulty transporting it or who live further away.

Every day, the ATM produces 4,650 litres of safe water, serving five villages within 3-4 kilometres of the machine. Most days, 250 villagers can be counted queuing up for the ATM.

As villages emerged as second-wave Covid-19 hotspots, Jiban Kalita, another committee member, took the initiative to open the unit from 7am to 6pm. Previously it was open from 8am to 10am and 4pm to 6pm; the longer opening time helped to ease crowding. 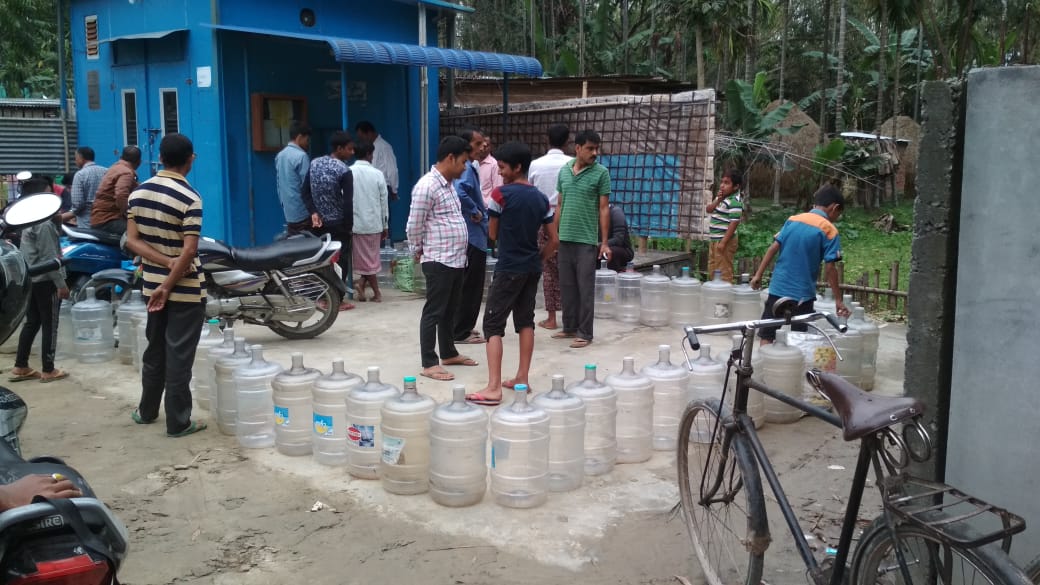 Crowding around the water ATM before the pandemic, when opening times were shorter (Image: Sashanka Bezbaruah)

The ATM is maintained by caretaker Sashanka Bezbaruah. It uses a nanotechnology-based ion exchange resin to remove iron and arsenic from groundwater. Every day, Bezbaruah washes out the pollutants gathered by the machine.

“If you don’t clean these resins, the system will lose its efficacy. Discoloured water may emerge, and traces of removed arsenic may slink back,” said Rohit Sar, a former Tata Water Mission consultant who worked with GVM and the local community to identify alternative sources of clean water.

The land the ATM sits on was lent by Bipul Deka, a farmer from Barigaon. The committee spends INR 10,000 (USD 134) of the money raised from users to pay Bezbaruah’s monthly salary, INR 800-1,200 (USD 11-16) on electricity, and the rest on chemicals to clean the water and the annual maintenance charge. 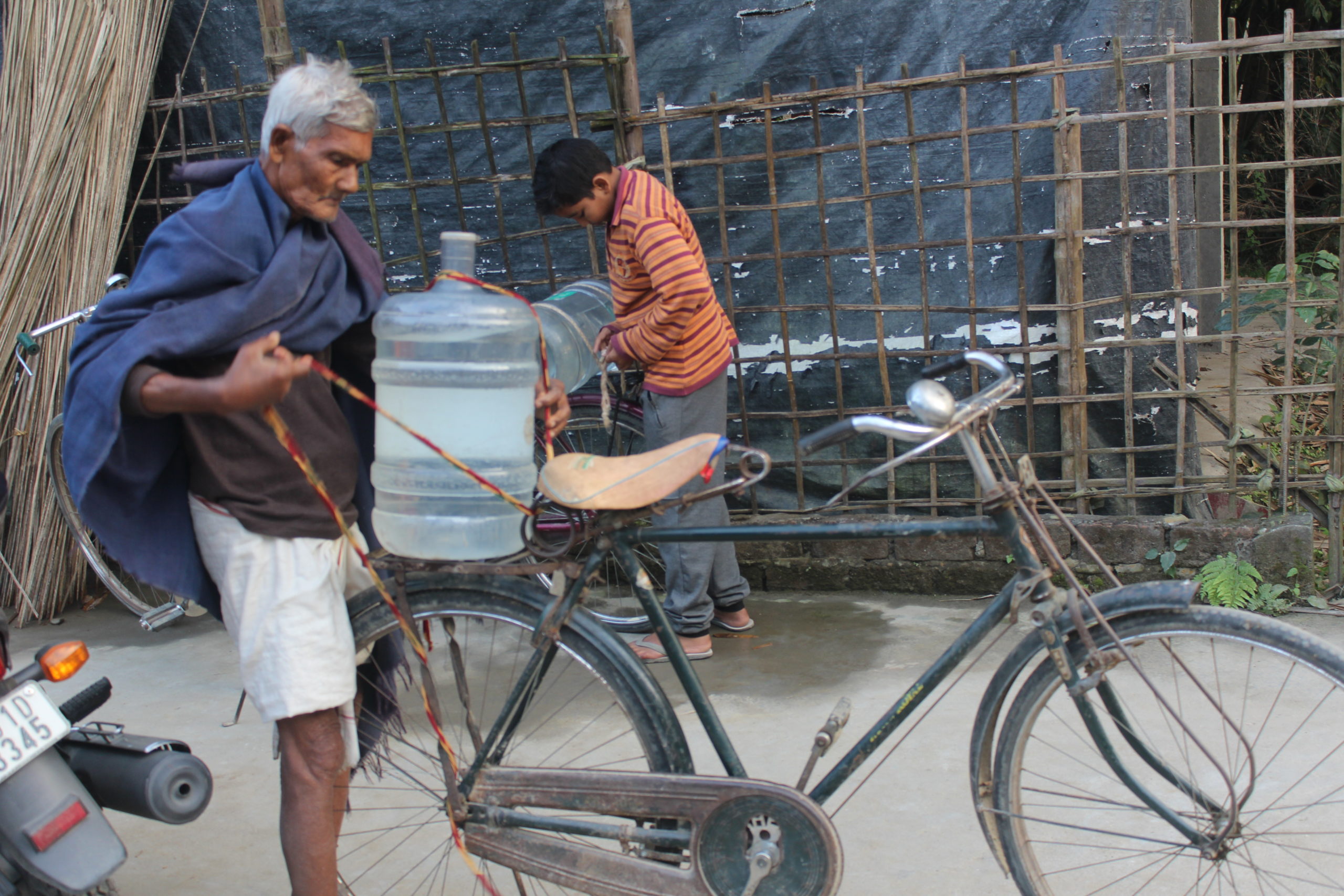 Can the success of Barigaon’s water ATM be replicated?

Barigaon’s ATM was the first of its kind in the state. Five more have been installed, although only three of those are operational. A GVM staff member told The Third Pole that work was underway to repair the mechanics.

Achintya Bezbaruah said that the state government has plans to install 172 similar ATMs to prevent arsenic poisoning in Assam, following the success of the model in Barigaon.

The main challenge is not technology, but cooperation. The sustainability of such initiatives is dependent on whether local institutions support them or not, said Eklavya Prasad, managing trustee at Megh Pyne Abhiyan, a public charitable trust working on water stress in eastern India.

Piecemeal solutions and lack of political will

Tube wells in Assam were installed in the late 1990s, in an effort to combat cholera and diarrhoea. However, for years they were not tested for arsenic or fluoride. In 2004, AB Paul, a former chief engineer in Assam’s Public Health Engineering Department (PHED), detected arsenic for the first time.

Since 2019 the central government has partnered with the states to implement the Jal Jeevan Mission, which aims to provide potable tap water to every rural household in the country by 2024. Habitations affected by arsenic and fluoride contamination are to be prioritised. Unfortunately, the discrepancy between data provided by state and central governments on arsenic-affected habitations and mitigation makes a mockery of this.

The 2015 report of the Inter-Ministerial Group for Arsenic Mitigation puts Assam as having taken mitigation measures in 2,212 out of 2,571 arsenic-affected habitations either through piped water supply schemes or newly dug wells. Only 359 habitations remain to be covered. By contrast, 2017 data by the Assam PHED states that 4,523 habitations out of 6,681 habitations are yet to receive any mitigation measures.

Some years ago, Paul discovered a pipe four kilometres from Barigaon that was connected up but not in use. He flagged this to the government, but no remedial action was taken. Paul told The Third Pole that the pipe supplying groundwater could have easily supplied enough water for 4,000 people.

Paul suggested there is a discrepancy between schemes on paper and benefit on the ground. Pipes are laid down. Contractors and suppliers get paid. On paper, the affected area is presented as covered. However, in reality the pipes are not being put to use. “There are 100 such unused pipes across Assam that could have easily benefitted neighbouring villages,” Paul said.

Climate change adds to the challenge

Bipul Deka, a farmer, grows a variety of crops including cabbages, cauliflowers, leafy greens, gourds and onions. This year, he says, drought has reduced his crop yields to a sixth of what he expected. There is little he can do, except supplement his farming with daily wage labour. A 2011 study predicted a 25% increase in drought weeks due to climate change during the monsoon months in parts of Assam.

Droughts have a deeper effect. Hotter months lower the groundwater table, resulting in more dissolved iron and arsenic content. “The ATM is designed to filter up to a certain concentration, [beyond this concentration] it is bound to malfunction,” said Rohit Sar, a consultant with TWM.

Gatherings around the water ATM happen less now that it is open throughout the day (Image: Sashanka Bezbaruah)

Though the water ATM in Barigaon fortifies community cohesion, it uses groundwater. Already, overexploitation of groundwater – releasing arsenic into the aquifers – is happening under the government and private water supply schemes in Assam. Opting instead for surface water – still expensive – would guard against this.

Achintya Bezbaruah, the professor at North Dakota State University, suggested that tapping the Brahmaputra for water might be the way forward. “Even if 135 litres of drinking water from the river were to be supplied every day, we would be using only a fraction of its dry-weather flow,” he said.

The silent water crisis behind India’s most precious tea