Ashfiq Mohammad Khalid, a rice farmer, has been making losses for years. His paddy fields rot from the bottom up before his crop can mature during the growing season.

For Khalid, who lives in the central district of Gazipur, and other farmers along the Balu River, farming is tough. Gazipur is just north of Dhaka, and has become a local hub of mass-produced garments in Bangladesh’s sprawling textile industry. Pollution in the rivers around the capital has reached very high levels.

Farmers claim the indiscriminate release of wastewater from nearby clothing factories has turned the area’s agricultural fields to tar, and causes long-term skin disease.

“I have been suffering from itching all over my body and sores developed on my hands, as I had to work in my paddy field,” Khalid tells The Third Pole.

“When farmers hoe and plough land for crop cultivation, it is as if we are digging through tar. There are no fish in the river, because of pollution with toxic wastewater released from factories, mostly those manufacturing garments.”

Textiles are an important industry in Bangladesh, with knitwear and other garments accounting for about USD 44 billion of the total USD 52 billion it exported from July 2021 to June 2022. Most of the apparel factories have been set up in Gazipur, Narayanganj and Savar, districts that fall under the metropolitan area of Dhaka.

Out of a total of 2,220 factories in Gazipur, 1,222 manufacture ready-made garments, employing about 1.6 million people as day labourers, according to the Industrial Police. 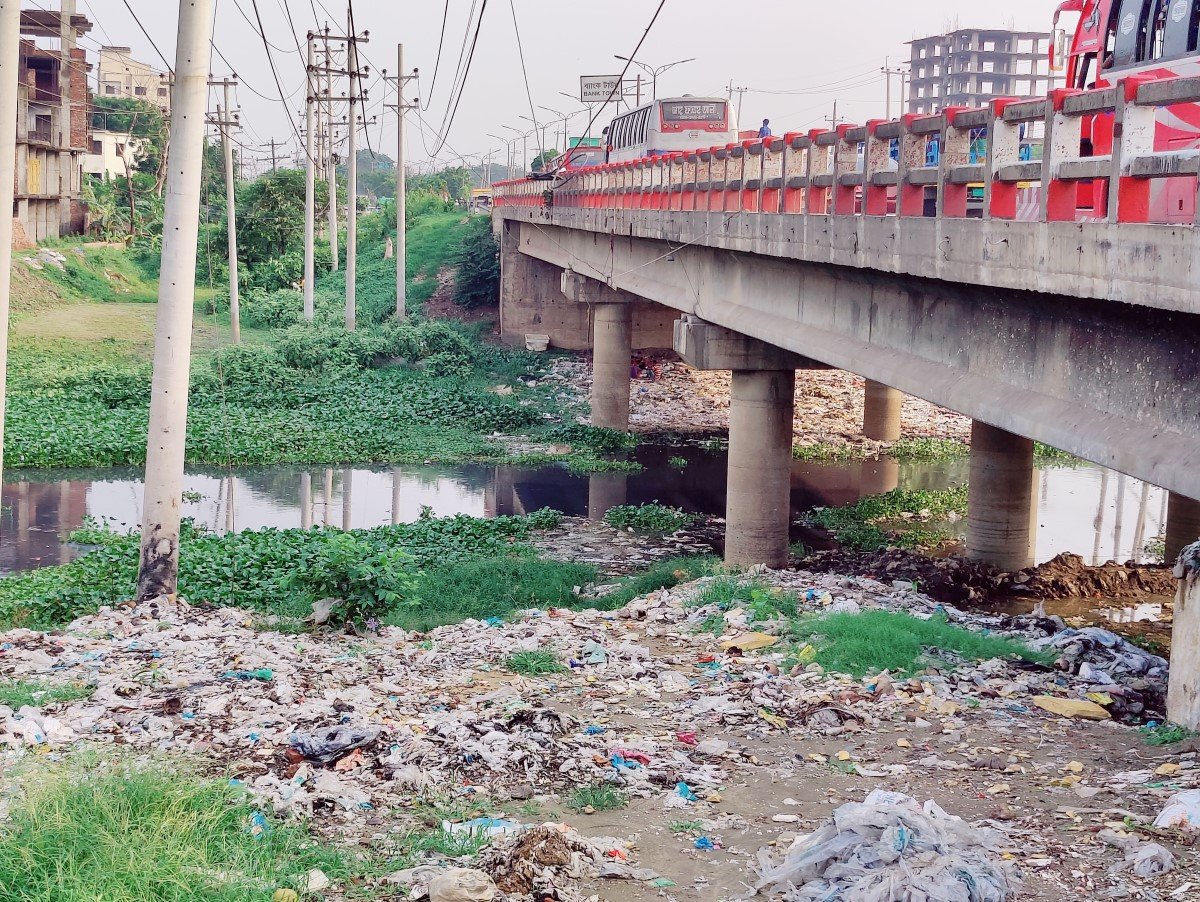 Untreated industrial wastewater is released into a waterway around Dhaka (Image: ESDO)

However, only 556 of all the factories have effluent treatment plants (ETPs) on paper, Muhammad Monir Hossain, chair of the Bangladesh River Foundation, told The Third Pole. Of these, he said, just 18 have installed inter-process communication cameras, which allow the Department of Environment to monitor the ETPs remotely.

The Labandha River is one of the major victims of industrial pollution, as there are about 500 factories along it. Industrial waste from Gazipur and the city of Sreepur flows from the Labandha into the Turag, then joins Dhaka’s main Buriganga River at Mirpur.

“If ETPs are as efficient as the [factory] owners claim, then how have these rivers become so polluted that even the nearby agricultural lands have become tar black?” asks Hossain.

In collaboration with other research groups, Hossain’s organisation surveyed 149 rivers along industrial areas and found alarming levels of wastewater pollution, showing ETPs are barely protecting the environment, he says.

Ready-made garment factories that dye, wash and colour textiles, and cement and medicine manufacturers, among others, have been discharging wastewater into the Buriganga, Shitalakshya, Turag, Dhaleshwari and Balu rivers indiscriminately, even though there is a legal prohibition against this, Hossain adds.

Of all the textile goods produced globally, up to 65% are made from synthetic fibres, such as polyester, says Shahriar Hossain, secretary-general of the Environment and Social Development Organization (ESDO), a non-profit in Bangladesh. Synthetic fibres shed tiny bits of plastic, smaller than five millimetres in diameter. These microplastics do not break down easily and can remain in the environment for hundreds of years. They are also often consumed by marine animals, which mistake them for food.

A series of recent studies has highlighted the extent of the problem. Research published in November 2022 found that treatment plants in Bangladesh remove 62% of microplastics on average. This means that even with a working treatment plant, 38% of the microplastics generated by the dyeing, washing, pharmaceutical, battery and printing industries are being released into the environment – and ultimately the food chain. 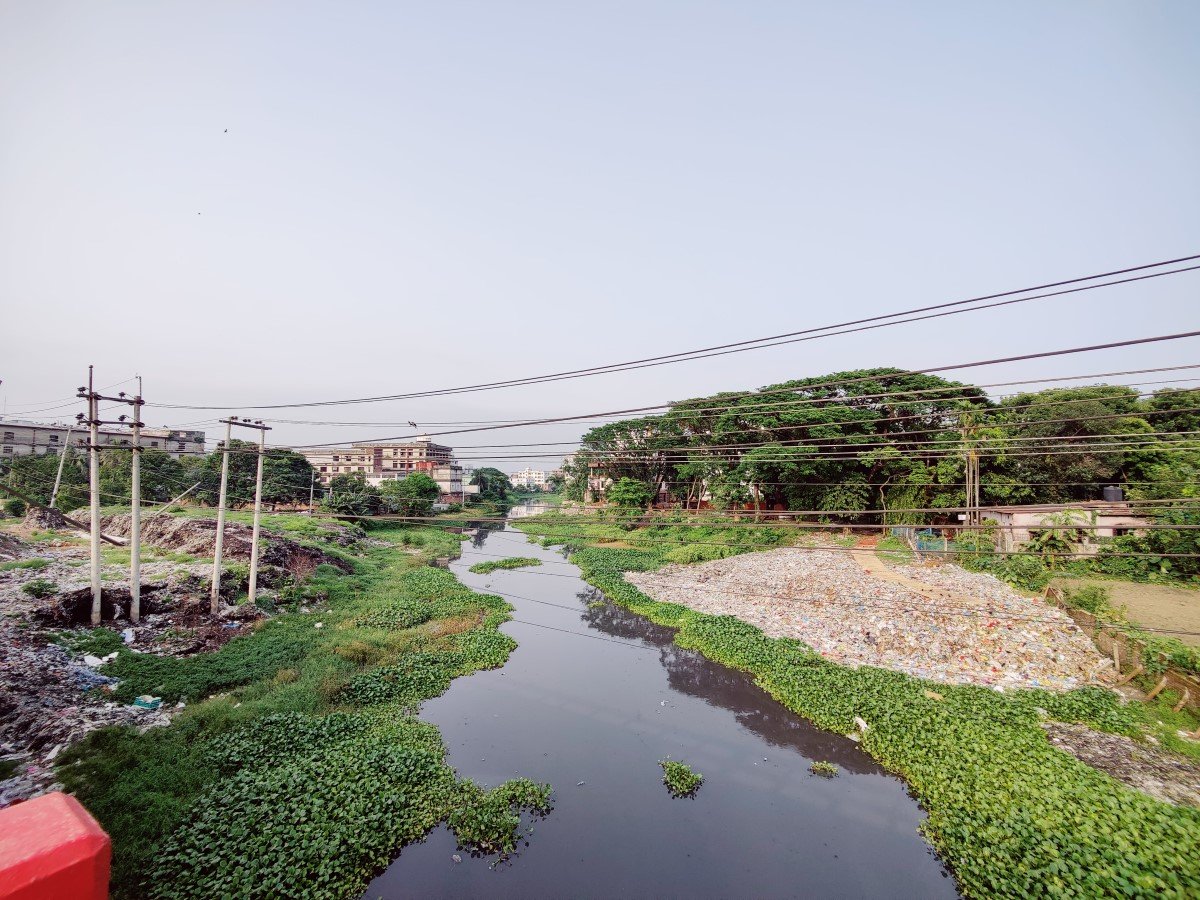 Research published in January revealed microplastics are present in the water, sediment, fish and other aquatic animals of the Buriganga River.

And in May last year, a study concluded that the Dhaka watershed is “heavily polluted”, noting that, the “Dhaleshwari, Buriganga, Shitalakshya, and Balu rivers, in particular, were discovered to be black in colour visually and were experienced with unpleasant smells during the visual investigation”. The rivers of the watershed contained multiple contaminants, from high levels of organic pollutants to heavy metals. These heavy metals leach out of open landfills, the most common way of disposing of solid waste in Bangladesh, into surface and groundwater.

The researchers noted that the Dhaleshwari, Buriganga, Shitalakshya, Turag and Tongi rivers are “seriously contaminated” and that their waters “should not be used for irrigation”.

Shafi Mohammed Tareq, one of the authors of the study on the efficiency of ETPs, told The Third Pole that water contamination due to toxic metals made crops grown from such water unsafe. He added that the economic cost to nature and human health of the pollution caused by inefficient treatment systems would be much higher than the profits generated by the ready-made garment industry in Bangladesh.

According to Shahriar Hossain of the ESDO, fewer than 1% of factories in Bangladesh use or maintain the ETPs they have. He told The Third Pole that factory owners keep the ETPs shut most of the time and only run them during an inspection. Mohammad Azaz, chair of the River and Delta Research Centre (RDRC), which brings experts in the fields of river basin management, sustainability and delta studies together, told The Third Pole that the Department of Environment has limited capacity to properly monitor ETPs inside factories.

The dyeing industry in the Shyampur industrial area of southern Dhaka produces a massive amount of oil, grease and ammonia, which heavily contaminates local water bodies. Azaz told The Third Pole that no one can use this water and people have reported various physical problems, according to a recent study by the RDRC. Its survey of river water and agricultural fields in Sreepur and Shyampur in Gazipur found pollution was 10 times higher than the permitted level.

“Though the owners [of factories] claim to have 15% recycling capacity, we measured that the industries [related to ready-made garments] barely recycle 2-3% of the water they use in factories,” Azaz tells The Third Pole.

Tareq, who is also a professor in the Department of Environmental Sciences at Jahangirnagar University in Dhaka, says ETPs are a costly method to treat the water used in textile factories.

“Therefore, factory owners remain reluctant to install ETPs or mechanisms to recycle factory wastewater, and those factories that have ETPs have been found inefficient,” he says, adding that more local companies would adopt ETPs if the technology was more advanced and cost-effective, instead of dumping sludge waste, a common practice.

Sludge is a semi-solid byproduct of wastewater treatment. Tareq and Hossain allege it is often illegally dumped in landfills, agricultural fields and used in some other factories like cement and brick kilns. Worryingly, during the monsoon this sludge waste spreads from where it is dumped and ends up in rivers.

Tareq says that heavy metals remain in the sludge waste, which can be absorbed by crops and enter the human body. If consumed, it carries the risk of causing diseases, including cancer.

Is the situation improving?

Sector insiders admitted at the Dhaka Apparel Summit held in November 2022 that waste management and recycling are major challenges for the ready-made garment industry in Bangladesh. They said that the fashion industry has a global waste problem and more attention should be paid to innovation and technologies that reduce water and environmental pollution.

Mohiuddin Rubel, a director of the Bangladesh Garment Manufacturers and Exporters Association (BGMEA), admits that there are some challenges when it comes to the waste management and recycling capacity of the sector.

“We have a lot to do in terms of enhancing recycling capacity. Many owners don’t want to move to enhanced recycling, due to the huge cost,” Rubel adds.

Nonetheless, Rubel asserts that things have improved greatly in the recent past due to environmental laws, improving business conditions, buyers’ requirements and government monitoring and support. He says that the ready-made garment sector has now reached its highest-ever compliance with environmental requirements.

According to the BGMEA, the country’s clothing sector currently has 178 factories that hold certificates for Leadership in Energy and Environmental Design from the US Green Building Council. This rating system is used to determine the environmental performance of a building.

Rubel claims that the audit mechanism and automation in obtaining environmental clearance from the Department of Environment is a transparent process that cannot be manipulated, referring to online monitoring and submission of documents. He says this has contributed to the improved factory environment for clothing manufacturers, such as the increasing number of green factories, in Bangladesh.

Restoring rivers in Bangladesh is a continuous struggle

Ganga more polluted than ever, despite Indian government’s action plans