In the Indo-Gangetic plains, there are many widow-villages where the men have died from drinking water laced with arsenic. Women often come to the area to marry and so are only affected later in life. In India, over one million people have died in the last 30 years because of the presence of arsenic in drinking water, according to Saurabh Singh, founder of the Inner Voice Foundation (IVF), an organisation that works to address arsenic water contamination.

Arsenic occurs naturally in groundwater supplies of the Ganga basin, as well as coming from industrial pollution and mining. This affects an estimated 50 million people in India alone, as well as people in parts of Bangladesh, Nepal and Tibet. In some places arsenic levels reach over 300 times the safe levels prescribed by the World Health Organisation (WHO). Arsenic also seeps into irrigation water and crops as the situation is made worse by over extraction of groundwater.

This has wreaked havoc in the villages of Uttar Pradesh, Bihar and West Bengal. Millions of people living in the villages along the Ganga are suffering from skin lesions, ailments of kidney, liver and heart, neurological disorders, stillbirth and cancer associated with long term consumption of arsenic found in water coming from handpumps and even in piped water.

As part of 28-year field study (1988–2016), IVF noted that 1,194 arsenic patients from 33 villages of the region with skin lesions were re-examined after 10 years and 14% of them had died with non-healing ulcers. About 48% of the arsenic patients were found to be suffering from Bowen’s disease and other cancers.

Arsenic contamination was first reported in West Bengal in the early 1980s. The National Human Rights Commission has taken note of the matter and even issued orders to the government to intervene but the situation remains the same. While multiple NGOs have been trying to draw the government’s attention to the issue, the administrative machinery remains largely apathetic, leaving the rural belt with no option but to consume toxic water.

Meera Sinha, a member the accredited social healthcare activist’s workers association (ASHA Sangharsh Samiti) in Bihar, told The Third Pole that the people living in the Gangetic belt are suffering from disease because of arsenic in their water. “When we go to the field, we find most people suffering from skin lesions, gastritis, lung and liver diseases,” she said.

The scale of the problem

According to India’s National Health Profile 2019 (NHP), 17 districts of Uttar Pradesh, 11 districts of Bihar and 9 districts of West Bengal have a high levels of arsenic in water.

However, research by the IVF shows that the problem is much worse. Working with the National Human Rights Commission, they found that 22 districts of Uttar Pradesh, 15 districts of Bihar and 10 districts of West Bengal have excess arsenic in water. 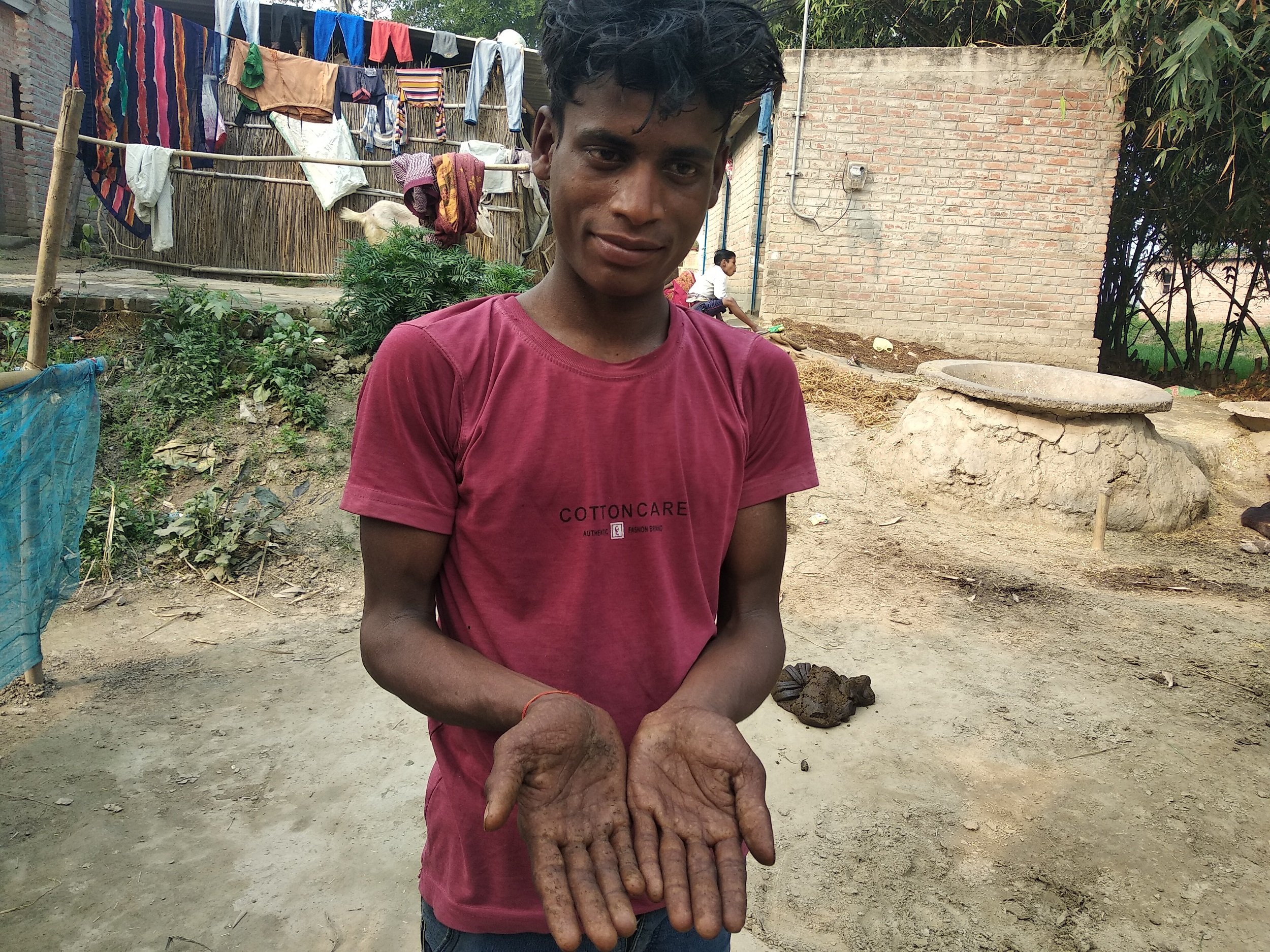 Golu, 16, has prominent lesions on his body. He says he had visited a doctor a year ago. The doctor blamed arsenic water for it and gave him a balm, which brings minimal comfort to him [image by: Umesh Kumar Ray]

The level of arsenic in Ballia, Uttar Pradesh, Bhojpur and Buxar in Bihar and Murshidabad in West Bengal has reached 3,000 parts per billion (ppb), 300 times of the WHO permissible limit of 10 ppb, while the normal range in other districts and villages is between 300 and 1,000 ppb, IVF data noted.

Shriprakash Pande, a resident of Govindpur village in UP’s Ballia district, said that 40-45 people in his village have died from drinking arsenic-contaminated water and about 15 people have liver cancer.

Chronic exposure to arsenic causes skin problems as well as damage to the neurological and reproductive systems and cardiovascular problems, diabetes mellitus, respiratory and gastrointestinal diseases and cancer, according to the WHO.

Kameshwar Mahato, 63, a resident of Chapar village of Moinuddinagar block in Samastipur district of Bihar, is affected by arsenic poisoning. He has developed blood pressure issues, which cause him to tremble. His hair was found to contain high levels of arsenic—17,613 microgrammes per litre (µg/l) —compared to a normal level of 50 µg/l. The doctor advised him to drink safe water. 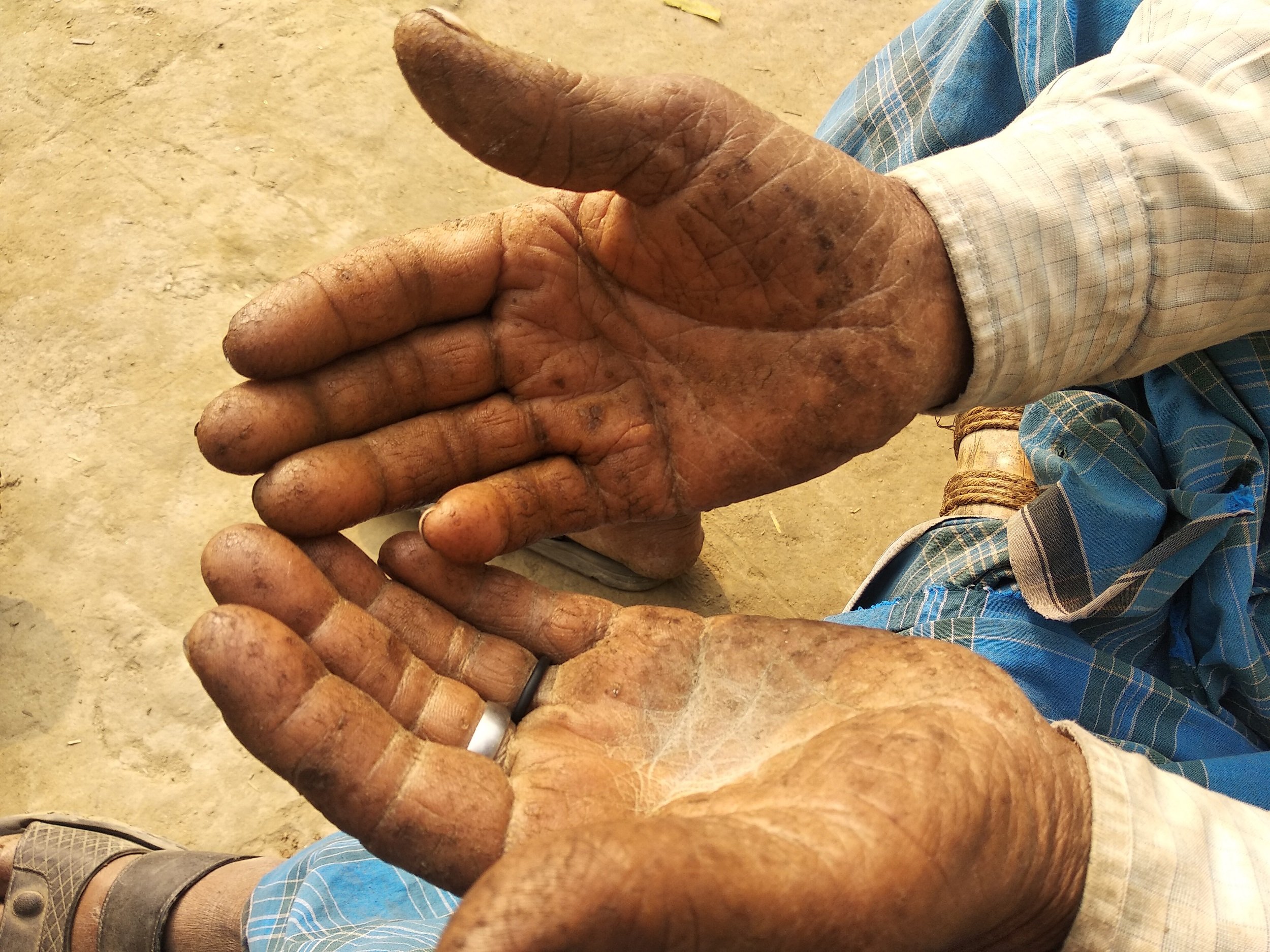 “The advice is alright but if someone is thirsty, he’ll drink whatever water is available.”

Mahavir Cancer Sansthan, a Patna-based cancer institute, found that 44 handpumps from 100 houses in Chapar village had a higher arsenic content than the WHO permissible limit.

Children are particularly vulnerable. When their system tries to expel the poison, their internal organs are affected severely and this stunts their physical and mental growth, said RN Dutta, a dermatologist and former department head at Kolkata Medical College’s dermatology department.

Millions of children drink the poisonous water from their school or village handpumps said IVF founder Saurabh Singh. “Many youngsters were rejected from armed services and paramilitary forces during their medical examination because the arsenic had poisoned them heavily and they weren’t fit for combat or duty,” he commented.

Exposure to high concentrations of arsenic during pregnancy was associated with a six-fold increased risk of miscarriages, stillbirths, preterm births, low birth weight and neonatal deaths, said Dutta. While helping prepare a report titled ‘Groundwater arsenic contamination and its health effects in India’ in 2017, IVF had come across a woman in West Bengal’s Nadia district whose first pregnancy had ended in a preterm birth. The second had resulted in a miscarriage and the third had resulted in early neonatal death as the arsenic content in her drinking water was 1,617 ppb; arsenic content in her urine was 1,474 ppb.

Through IVF, The Third Pole got in touch with Malti Ojha from Bihar’s Bhojpur district. She said she has had four miscarriages because of drinking arsenic-heavy water. “I went to my parents’ house when I was pregnant [the next time] as there was no arsenic in the groundwater. Only then I was able to give birth to a child, on the fifth attempt,” she said. 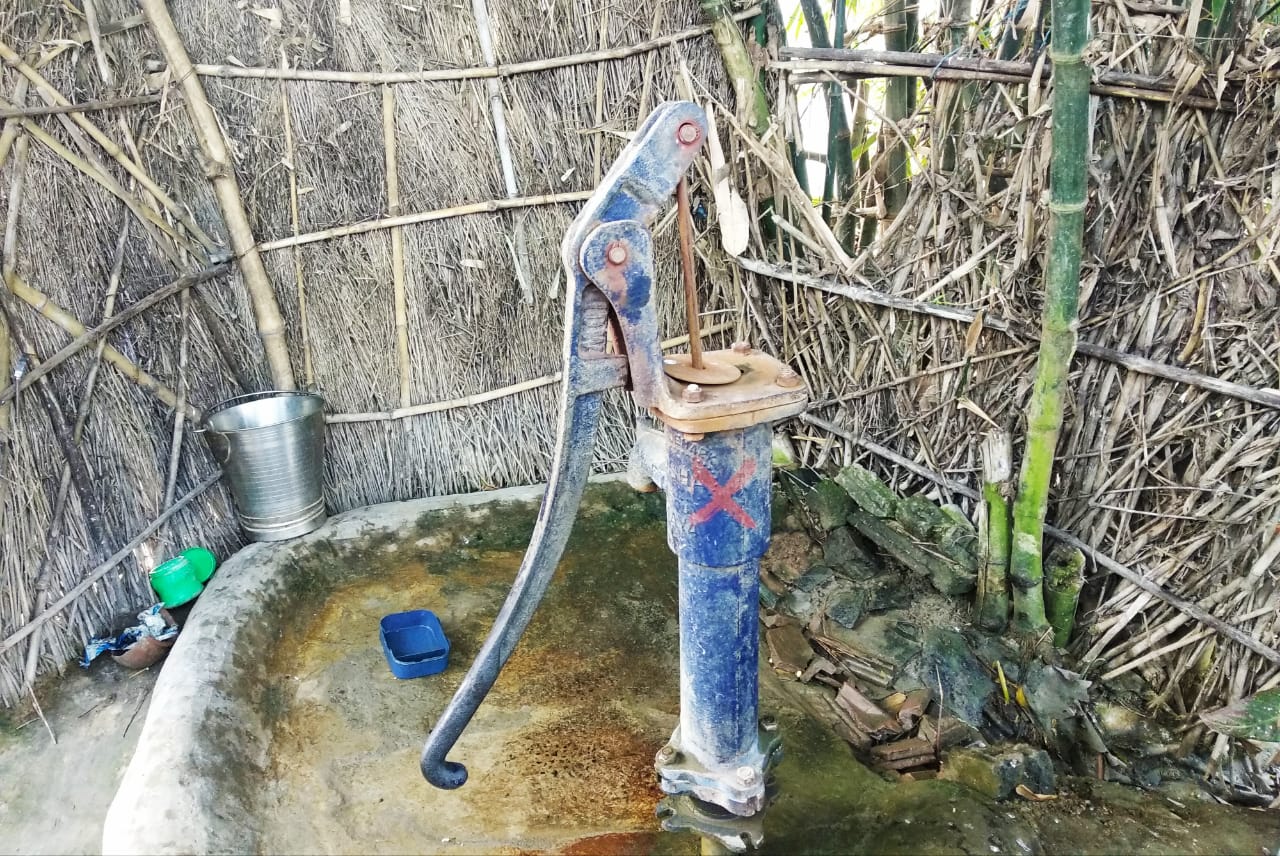 In some areas of Samastipur district, Bihar, the administration has put a cross on handpumps that give arsenic-heavy water [image by: Umesh Kumar Ray]

However, according to data from the Jal Jeevan Mission, which aims to provide tapped water to every rural household by 2024, only 2.69% of households in rural areas of West Bengal have functional household tap connections (FHTC), along with 5.62% in Uttar Pradesh and a surprisingly high 52% in Bihar, which borders both.

“In a village in West Bengal, we found a family of four generations suffering because of arsenic poisoning; the youngest being five years and the oldest member of the family was 80 years old,” IVF founder Singh said.

Despite repeated attempts, The Third Pole did not get a response from West Bengal’s public health engineering department or the state director of Jal Jeevan Mission, Ajay Kumar, on the issue.

Saurabh Singh from IVF has suggested other ways authorities can ensure people have access to safe water. This includes: providing access to purified river, rain or pond water rather than handpumps and borewells for drinking and cooking in hotspots districts; large scale testing of water sources; involving communities in monitoring drinking water; raising awareness of the dangers of arsenic in school textbooks; and reviving open wells, which are not contaminated with arsenic.

With inputs from Umesh Kumar Ray from Samastipur, Bihar, and Devanshu Tiwari from Ballia, Uttar Pradesh.

Kapil Kajal is a staff correspondent with 101Reporters, a pan-India network of grassroots reporters, and is on Twitter @KapilKajal1.

With activists silenced, China moves ahead on big dam project

Opinion: An equation to restore river basins in South Asia

Sebastian Strangio on China in the Mekong region