On a hot April day, a flock of birds take a break from hovering over debris on Karachi’s seashore and fly to an isolated green patch. Growing on the eight-hectare piece of land in the upscale neighbourhood of Clifton are fruit-bearing trees: the beginnings of an urban forest. Previously, it was a dumping ground, with plastic and animal carcasses piled as high as six metres.

This is one in a series of articles exploring some of the ways communities and governments in Asia are responding to the biodiversity crisis. You can view the whole series here

Oblivious to the scorching heat, a man in a purple T-shirt and blue jeans roams the grounds to monitor tree growth. It is Masood Lohar, founder and director of Clifton Urban Forest, an initiative described as a “green lung” in Pakistan’s largest city of 20 million people.

“Within two months, we have developed Pakistan’s biggest urban forest by working day and night,” claims Lohar. There are at least four more urban forests in Karachi. 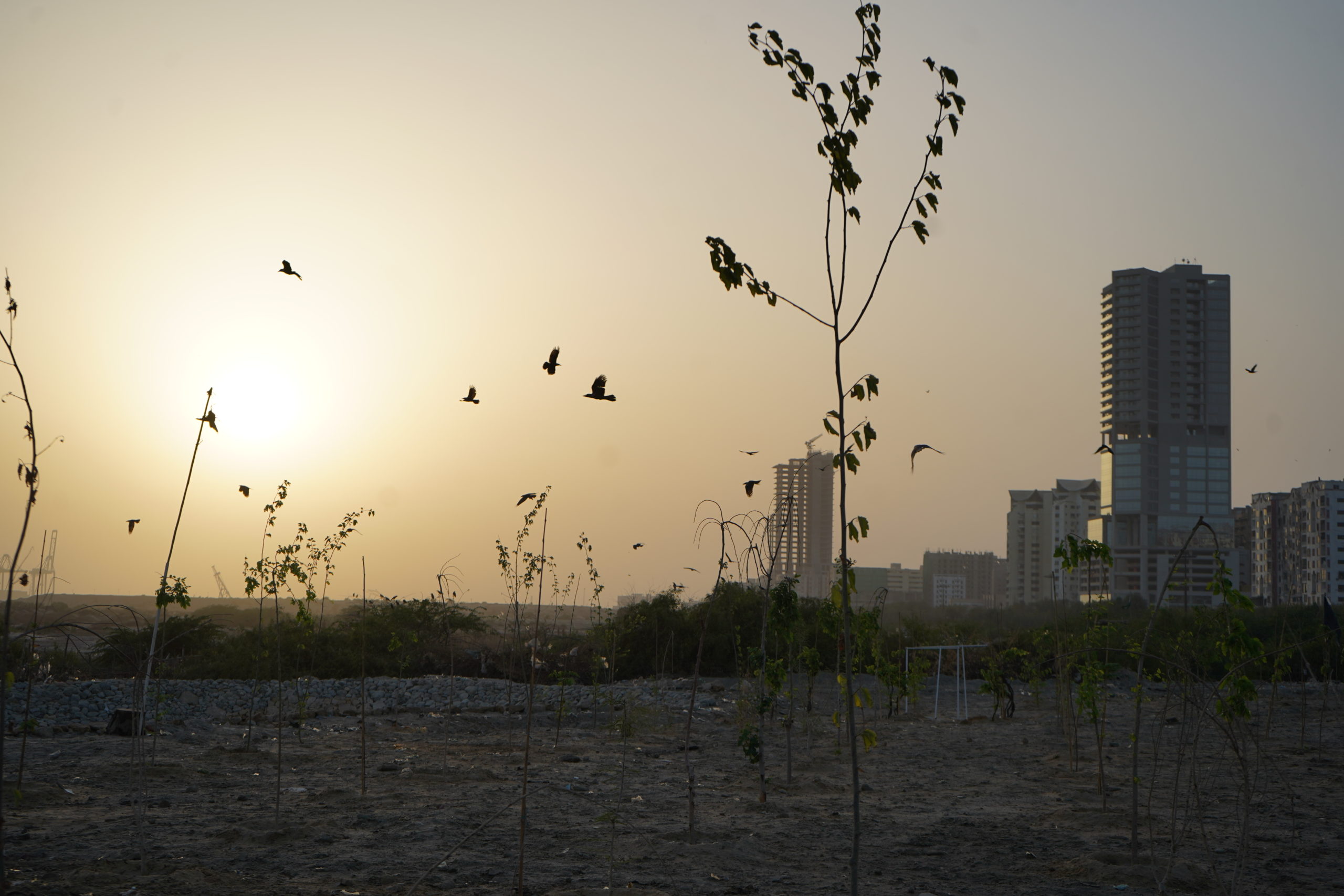 As citizens and administrators confront the reality of heatwaves and depleting green cover, urban forests are cropping up all over the country. Pakistan’s Ministry of Climate Change said 126 urban forest projects using the Miyawaki technique are being developed across the country, with 51 in Lahore, 50 in Khyber Pakhtunkhwa, 20 in Islamabad and five in Karachi.

What is the Miyawaki method?

The Miyawaki method is an innovation widely credited to Japanese botanist Akira Miyawaki in the mid-1950s.

It promotes the creation of densely packed forests that together form an ecosystem.

The idea is to plant three to five trees of different native species per square metre, so the plants compete to form a dense forest.

In February, Prime Minister Imran Khan inaugurated a spring plantation campaign and the first ever Miyawaki forest in Islamabad, an event that signalled his commitment to his party’s flagship Billion Tree Tsunami project. Following this, the Punjab government’s Parks and Horticulture Authority planted around 160,000 trees of 20 native species on eight hectares of land.

“The initiative will be expanded to other cities and towns to boost climate resilience in urban areas,” said Muhammad Saleem, spokesperson for the Ministry of Climate Change.

Miyawaki urban forest projects are being developed across Pakistan

In Karachi, where tree cover is a meagre 7%, Lohar said urban greening is one solution to the city’s many environmental challenges, which include heatwaves, urban flooding and air pollution.

His aim is to plant 3 million native trees using the Miyawaki technique on 90 hectares of public land by the Clifton beach, which is currently dotted with restaurants along a wide concrete pavement. The project’s programme manager Uroosa Anwar said around 40,000 plants and trees from 45 species have been planted so far. 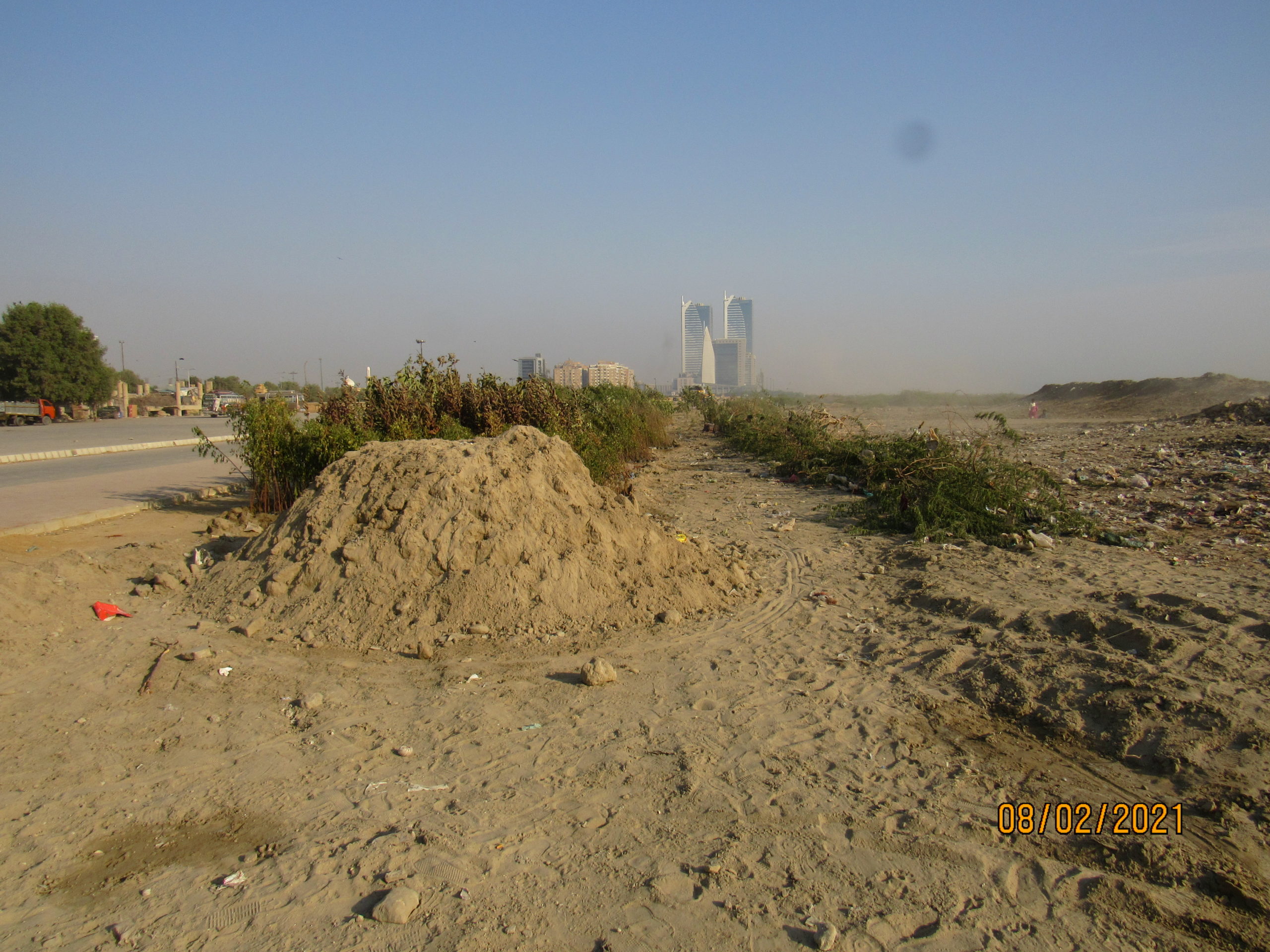 The plot of land in Karachi’s Clifton neighbourhood before trees were planted (Image: Clifton Urban Forest) 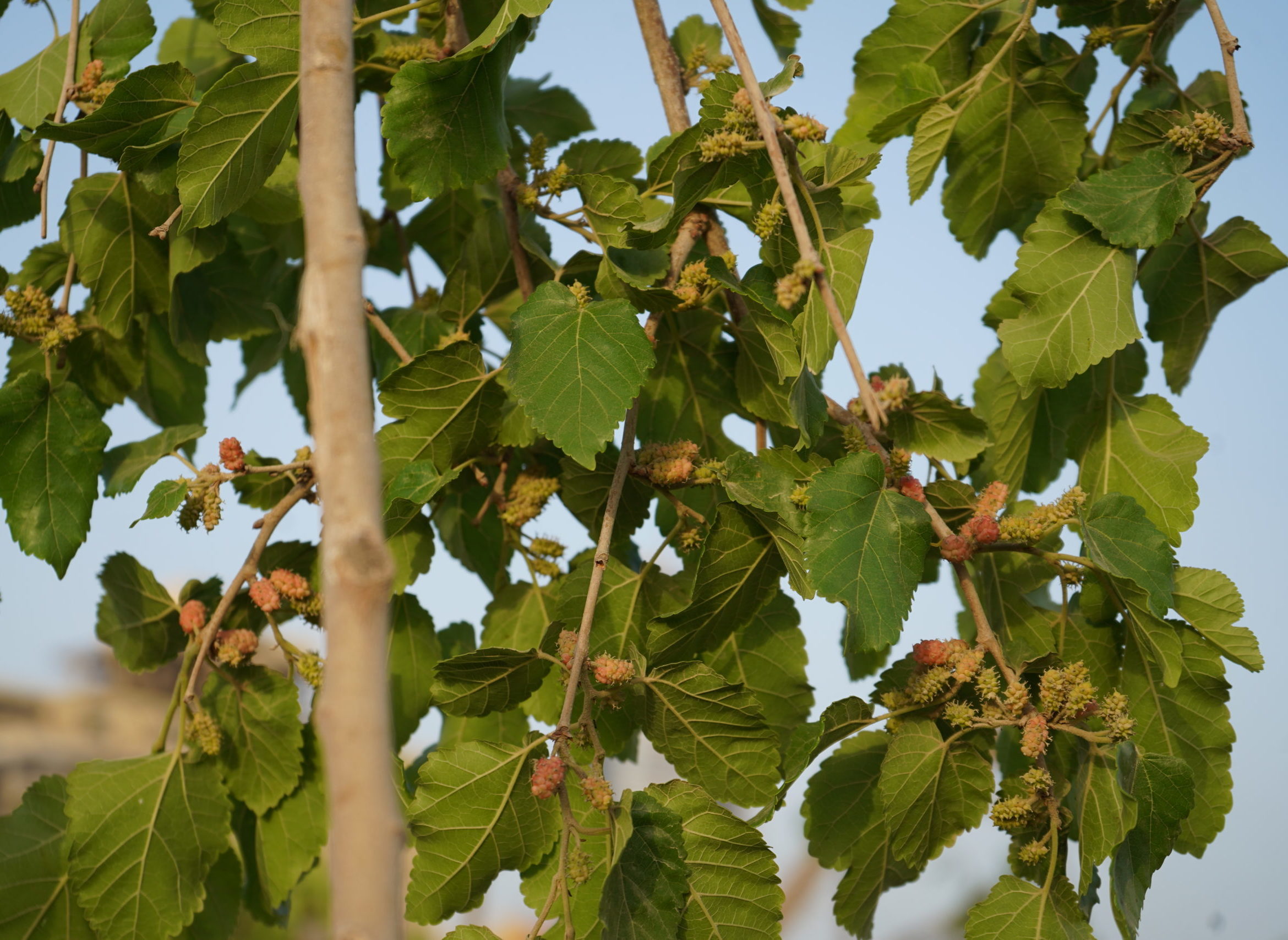 Shehzad Qureshi, a member of the Urban Forest Coalition, which aims to plant 70 million trees in Karachi in the next five years, is a strong proponent of these initiatives. “Like everyone else, I’m also worried about the city. Last year, rainwater was stagnant in front of my home for at least two weeks. I hired a big vehicle and came to see the Karachi Urban Forest. The land was dry as the plants had sucked up all the water,” he said.

Though there is no shortage of Miyawaki-style initiatives in Pakistan, a lack of research, high costs and saline water stand in the way of their long-term success.

Does the Miyawaki method work in Pakistan?

Javed Mahar, an environmental expert and forester, told The Third Pole: “While efforts are being taken to grow green cover using the Miyawaki method, natural forestry is being ignored which requires no water, just protection.”

“Our native trees like the ghaf and neem are very slow-growing. They take hundreds of years to become mature trees. The efficacy of the Miyawaki technique in arid zones like ours has not been tested,” he added.

How much can green spaces cool down cities?

A study in Bengaluru, India, found that:

• The average urban green space was 2.23C cooler than areas far from greenery
• Buildings and infrastructure experienced a cooling effect from urban green spaces from up to 347 metres away
• Reliance on air conditioning and refrigeration was higher in areas further from green spaces
• Green spaces reduced air and noise pollution and absorbed rainwater

In neighbouring India, author and conservationist Pradip Krishen has also voiced scepticism about the success of such projects in a subtropical climate. In an interview with The Hindu last year, Krishen said the concept was more suited to temperate regions with dense coniferous forest, and that in India they look like “tennis-courts filled with dense stands of plants”.

Mahar suggested a different technique. “In Japan, you will find more than 80 species in the same area, but in tropical and subtropical regions, two or three species have the same positive seasonal environment impact.”

He said that the Miyawaki technique requires the planting of “evergreen and deciduous plants, light demanders, shade-bearing plants as well as deep and shallow-rooted plants”, but in Pakistan this scientific approach is not being applied.

“I saw babul [gum Arabic trees] being planted in Miyawaki forests as a native tree, but it kills other plants – including its own species – while it grows. Aside from that, 90% of the plant nursery comes from bazaars, where these plants undergo certain treatments and become sick forever,” Mahar said.

Farah Afridi, who worked with Shehzad Qureshi on the Karachi Urban Forest project in 2016, said salinity in the city’s soil is bad for the trees.

Qureshi used filtered drainage water for his pilot Miyawaki forest project in Karachi. He said: “In some parts of the land, the plants were unable to sustain growth. This is because of salinity, since the forest is very close to the sea.”

Are five small forests in a city of 20 million people enough?

The Miyawaki method is also more expensive than traditional forests, and the Ministry of Climate Change acknowledges that it is only feasible in limited spaces, such as “public parks, barren or abandoned pieces of land”.

“First, a machine is required to dig a metre-deep hole to plant a tree. Every 100 square meters require 3 tonnes of bagasse [plant fibre], rice husk, manure, fresh soil and sweet water – a lot of money goes down the earth,” Qureshi said. 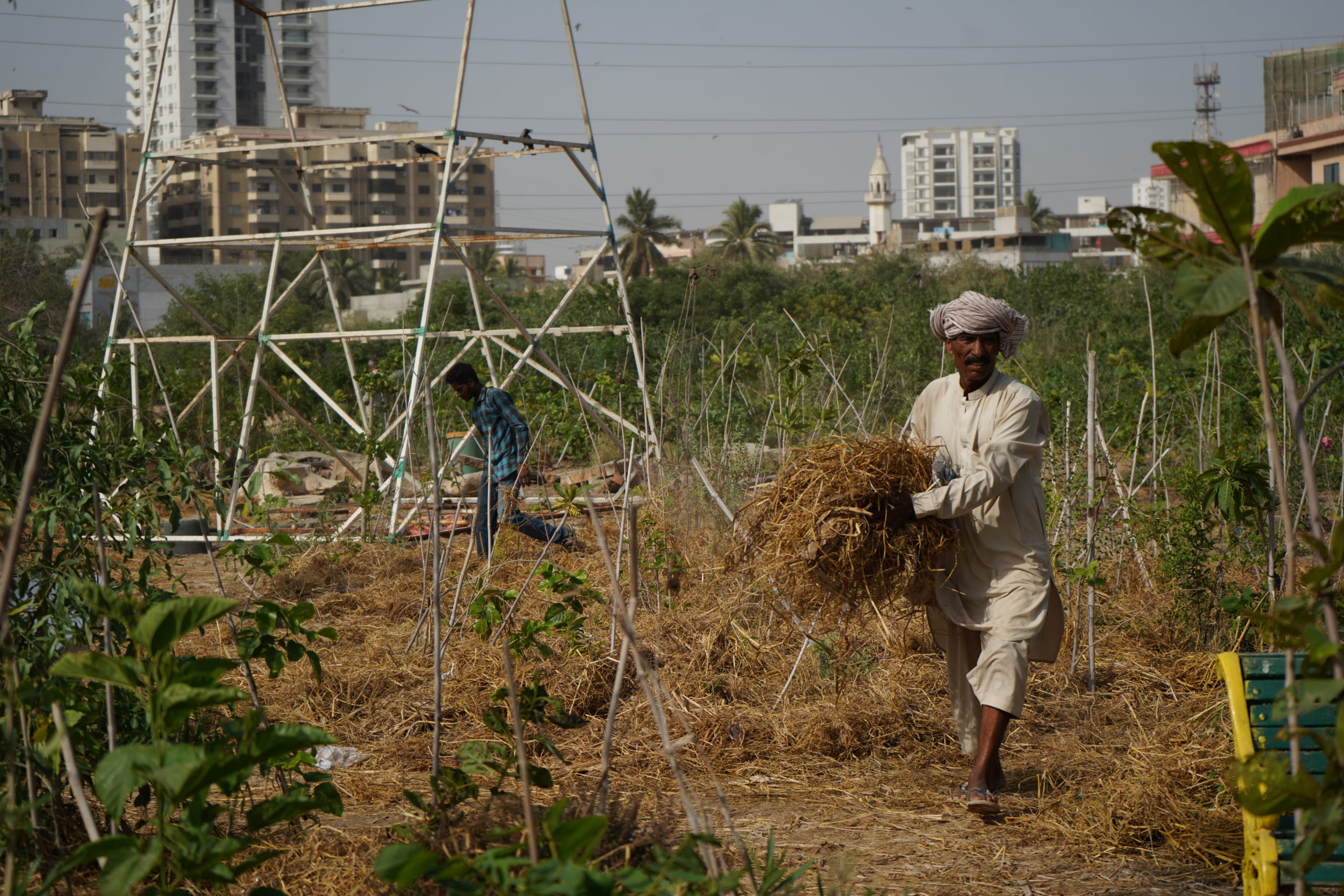 Both labour and materials are needed to create an urban forest, making them more expensive than traditional forests (Image: Manoj Genani)

Mahmood Nasir, the former inspector general of forests, said: “It’s such an expensive business that the plantation cost of one-eighth of an acre is up to PKR 600,000 [USD 3,900]. We don’t have water for drinking – where will one get water for these forests from? After filtration, drainage water is more expensive,” he said, acknowledging that though there are good institutions, there is no sound research on this technique.

“It’s better to plant vertical gardens instead of Miyawaki forests,” he added. “We can bring the temperature 5C to 9C down just by covering concrete with greenery.”

Afforestation is critical to mitigate climate change. The International Union for Conservation of Nature says forests help to stabilise the climate, as they “regulate ecosystems, protect biodiversity, play an integral part in the carbon cycle, support livelihoods and can help drive sustainable growth”. While urban forests can moderate local temperatures and beautify concrete spaces, Pakistan’s rapid deforestation, the second-highest in Asia after Afghanistan, persists.

In a climate-vulnerable country such as Pakistan where deadly heatwaves are predicted to become more common, forest cover is among the lowest in the world (5% compared with the global average of 31%).

Ahmad Rafay Alam, an environmental lawyer, said it is important to examine the long-term benefits of Miyawaki efforts. “Given the urban heat island effect, these forests provide shade, beauty and even a cooling effect but it’s important to think about scale. Are five small forests in a city of 20 million people enough? Those behind these initiatives should think of how communities will benefit from them.”

Afridi, who worked on the Karachi Urban Forest project, drew attention to another challenge: limited space. “Our cities have become completely concretised and town planners don’t keep plantation in mind. As a result, space for plantations is hard to find in the city. Sometimes, we have to dig up the concrete to plant a tree.”

Building a forest in the heart of Karachi

Opinion: Pakistan needs to go beyond tree planting to thrive after Covid-19