The white-bellied heron, found in the freshwater ecosystems of the Himalayas, is the most endangered heron species in the world. Listed as critically endangered on the IUCN Red List since 2007, its total global population is estimated to be only 50-249 adult birds, and numbers are declining even further.

This is one in a series of articles exploring some of the ways communities and governments in Asia are responding to the biodiversity crisis. You can view the whole series here.

According to the conservation NGO BirdLife International, the species is already extinct in Nepal and possibly in Bangladesh too, with the entire global population now restricted to northern Myanmar, northeast India and Bhutan.

Locally known as chubja, Bhutan is home to around 45-50% of the total global population of white-bellied herons, and the largest known number of breeding pairs. 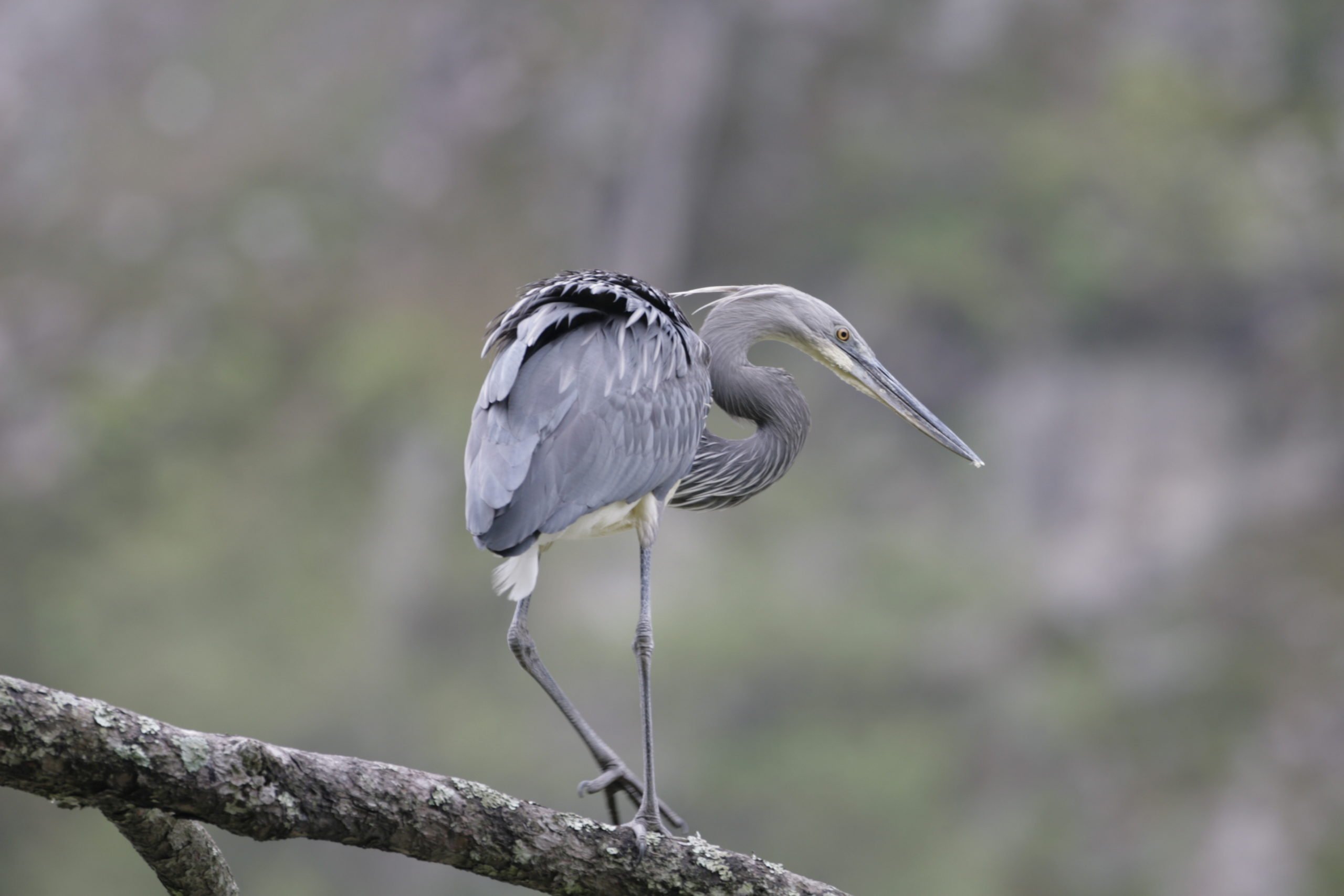 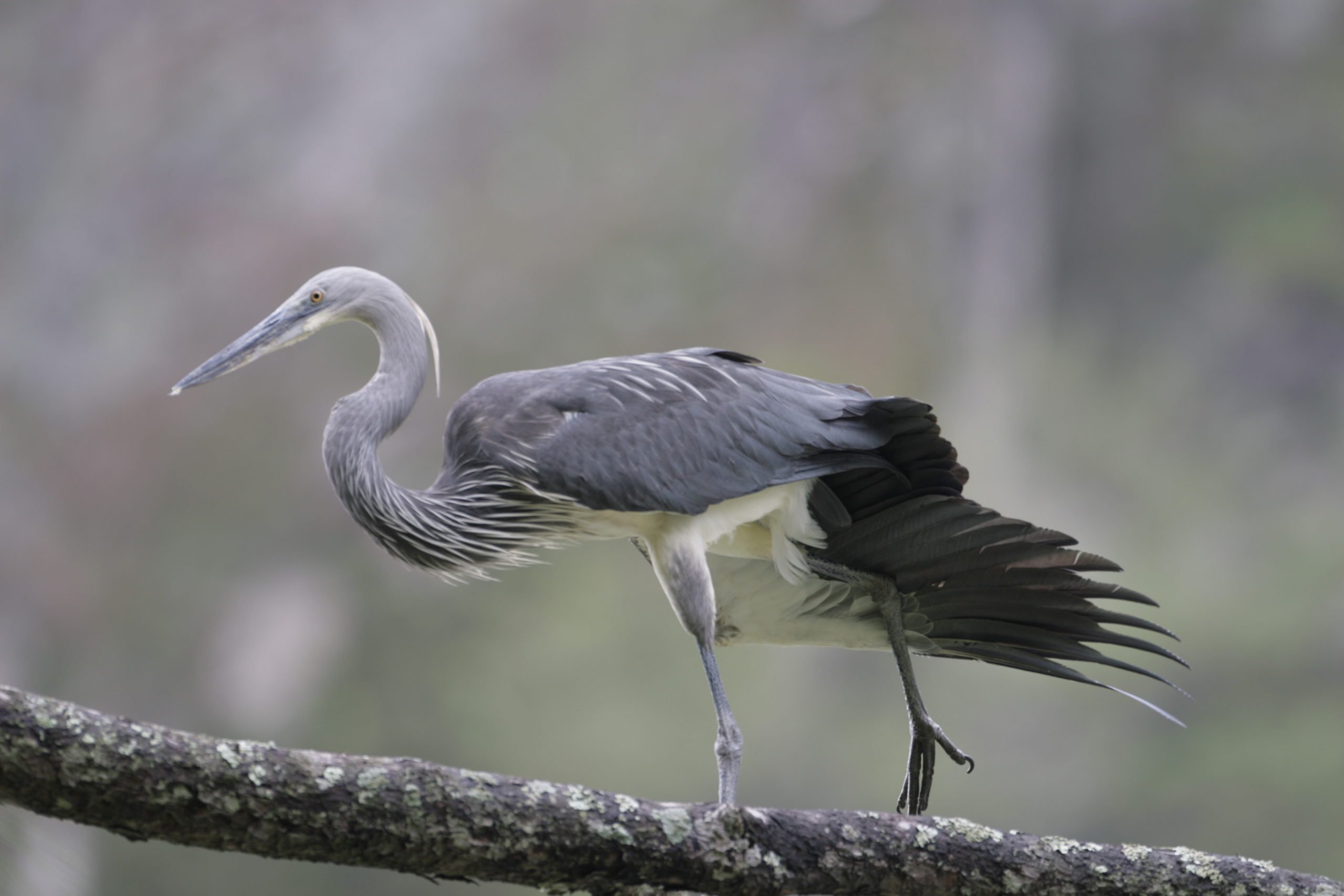 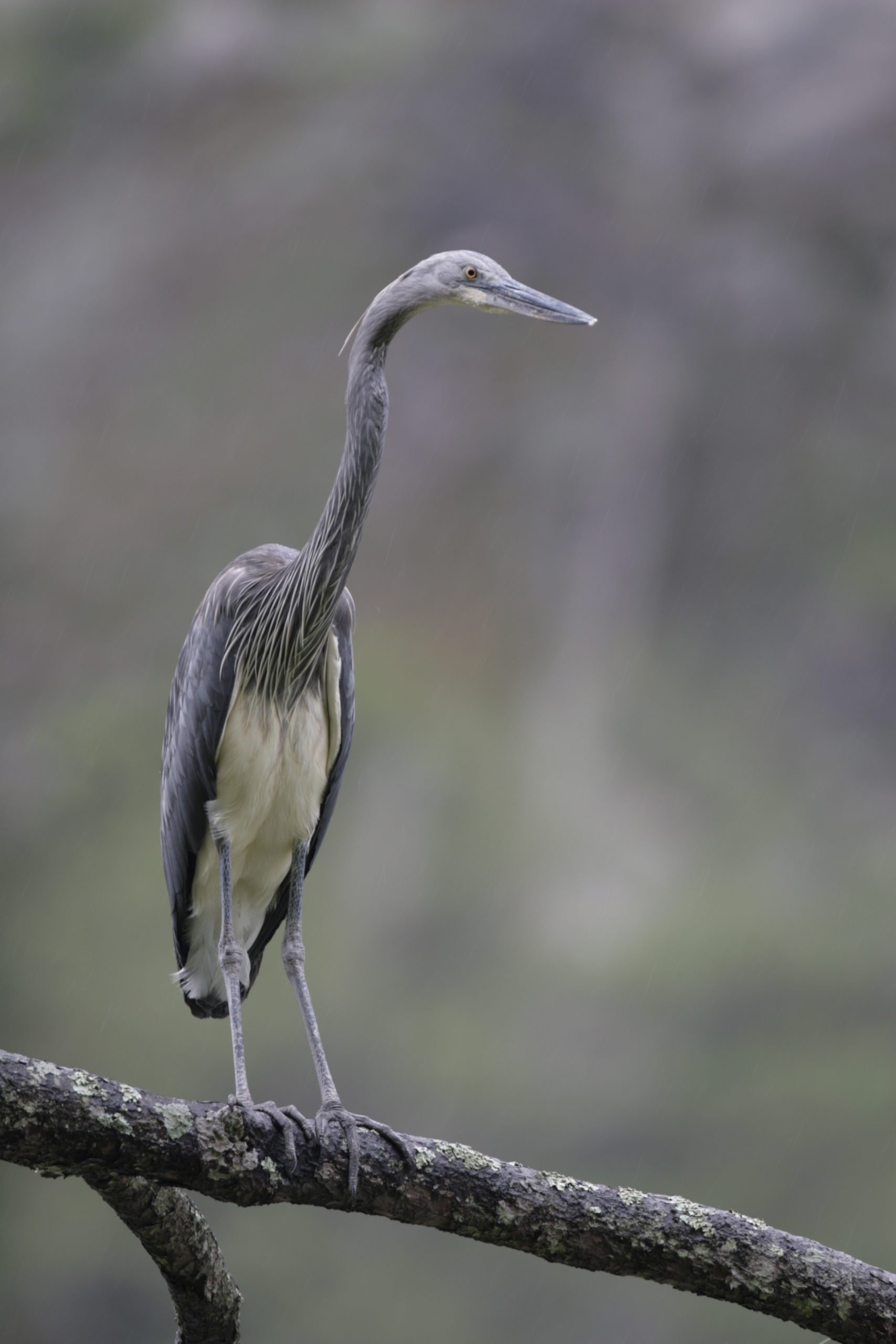 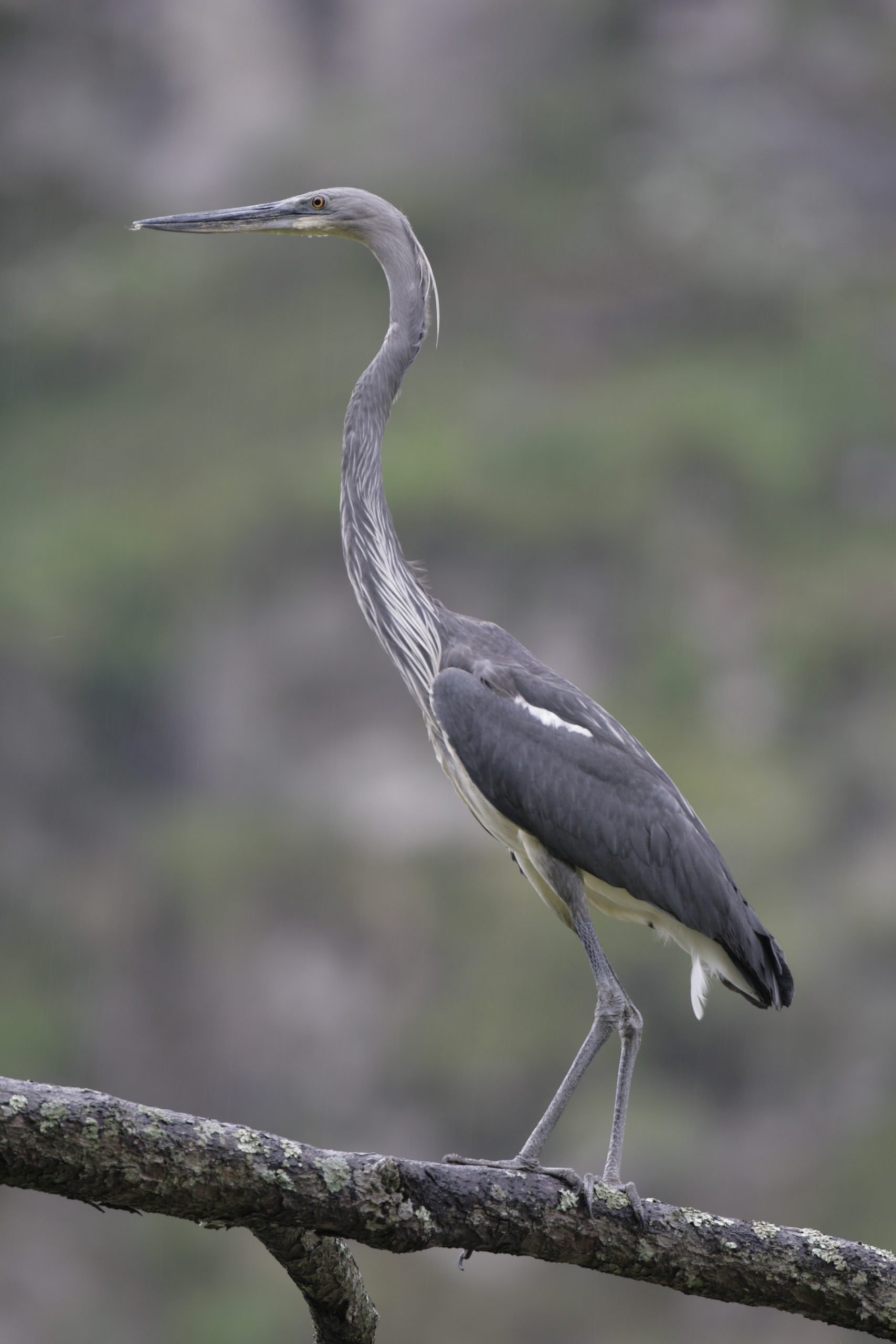 But a recent study gives cause for concern for the species in Bhutan too. In March 2021, the annual white-bellied heron population survey by the Royal Society for Protection of Nature (RSPN) Bhutan, a civil society organisation, recorded 22 herons: 19 adults and three sub-adult individuals. This was a decline by five compared with 27 birds in 2020.

Worryingly, for the first time in 19 years, in 2021 no white-bellied herons were sighted in the Pochhu and Mochhu river basins in central Punakha district, which once hosted the biggest and oldest known population in Bhutan. In addition, none were recorded in the Kurigongri basin and lower Mangdechhu basin in Mongar district in eastern Bhutan this year.

The 2021 survey report also revealed declining populations in places like Adha and Nangzhina in the lower Punatsangchu basin and nearby areas in Wangduephodrang district, which were favoured feeding and nesting habitats for the species prior to 2010.

In 2020, a white-bellied heron was spotted for the first time in a new location in the Chamkharchhu basin, central Zhemgang district. Chamkharchhu is currently one of the few rivers in Bhutan without development activities underway, such as sand and stone extraction or hydropower dam construction. In 2020 a bird was also recorded spending around two weeks at Bumdeling Wildlife Sanctuary in the high-altitude Trashi Yangtse district for the first time. No white-bellied herons were spotted in these new locations in 2021.

Threats to the heron

Indra Prasad Acharja, chief of the species and habitat conservation division at RSPN, told The Third Pole that conversion of major rivers for hydropower, expansion of agriculture and development for tourism are major threats to herons in Bhutan. The RSPN’s White-Bellied Heron Strategic Plan 2019-2039 emphasised the threat that hydroelectric projects pose to the heron and its habitat, noting that associated developments like grid electrification also cause major disturbance.

In addition, where natural riverine ecosystems persist, the white-bellied heron’s habitat is under pressure due to extraction of resources such as timber, sand and stones, and loss of prey due to overfishing. The herons also face threats from hunting, and from noise pollution caused by road development, said Acharja.

Fledgling herons often hit objects like electric lines when they fly from the nest, 70-75 days after hatching, sometimes dying from resulting injuries. This is on top of predation, nest failures and disturbance that the herons would naturally face. 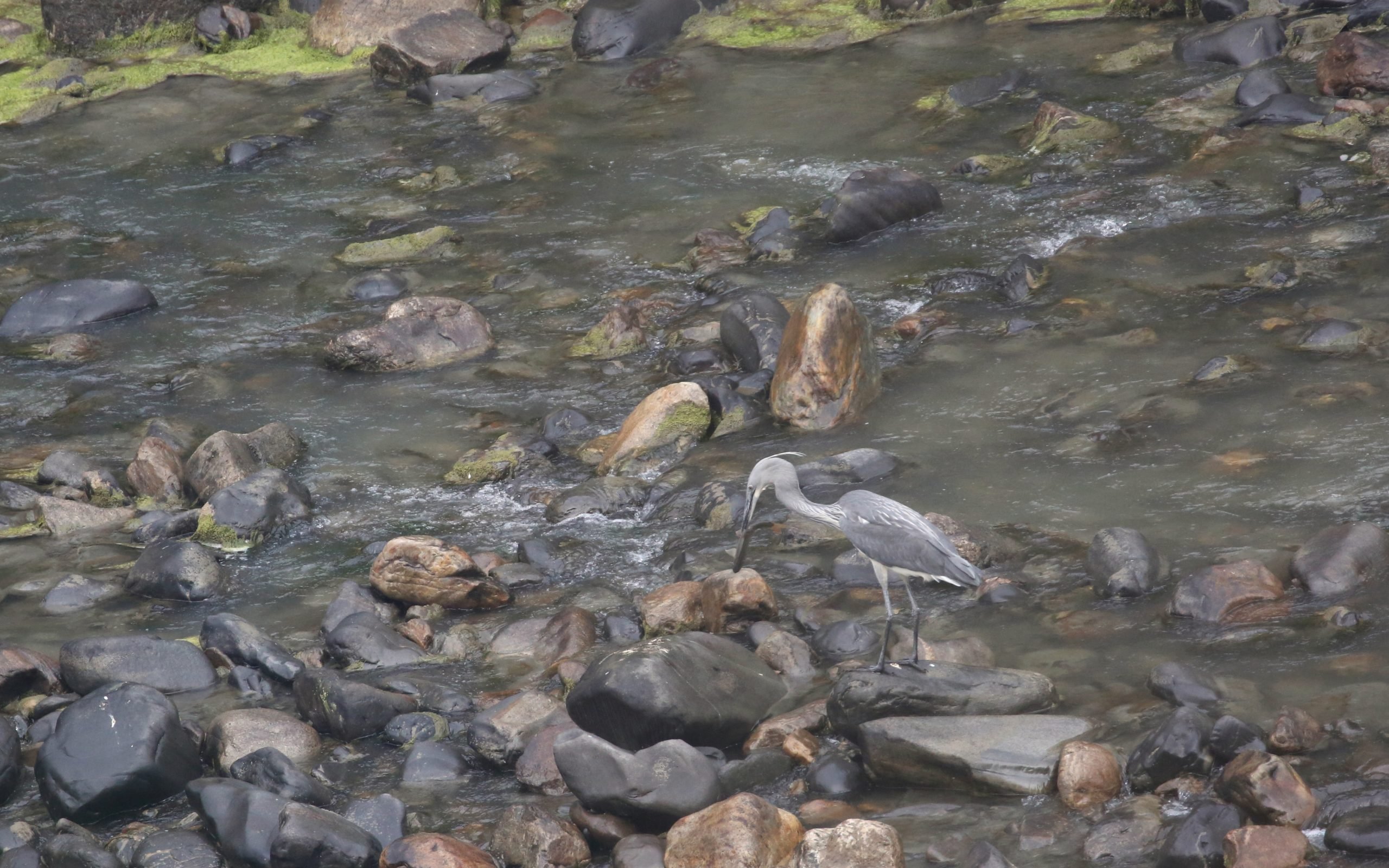 The bird’s small genetic pool, [with] fewer than five breeding pairs, is one of the greatest threats to its existence

According to the RSPN, the fact that the total number of white-bellied herons recorded has not risen on previous years, despite at least six juveniles and three active breeding pairs being recorded every year, is likely because of juvenile mortality. ​​“The bird’s small genetic pool, [with] fewer than five breeding pairs, is one of the greatest threats to its existence,” added Acharja.

Saving the white-bellied heron in Bhutan

On 10 June 2021, two juvenile white-bellied herons successfully left their nest in Tsaidang, near Mangdechhu and Tingtibi, said Damber Bdr Chhetri, 36, a forest ranger at Royal Manas National Park and a volunteer for the conservation of white-bellied herons with the RSPN.

Damber told The Third Pole that he started volunteering after spotting three herons in 2018 at Tsaidang. “I was with RSPN researchers back then, when I got to observe the birds for around one month,” said Damber. “It was heartwarming to see how the herons care for one another,” he said.

Damber is one of several foresters and local people across Bhutan who volunteer with the White-bellied Heron Local Conservation Support Group created by the RSPN. 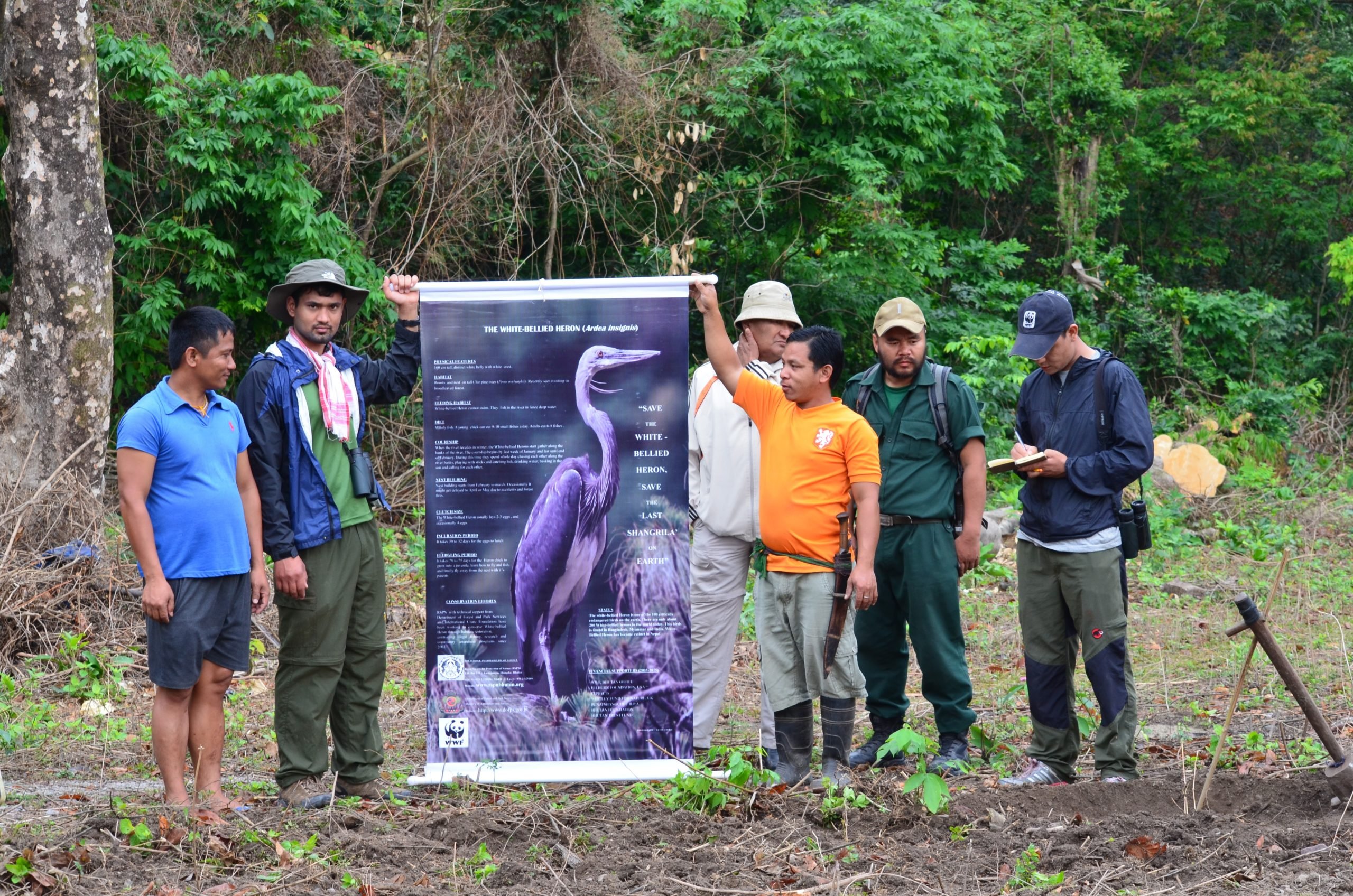 The RSPN’s white-bellied heron research team with farmers in Karmaling, Lamoyzhingkha, helping locals to identify the bird and raising awareness about its conservation (Image: RSPN)

2003 marked the launch of the RSPN’s annual white-bellied heron population survey. That same year, the RSPN discovered its first white-bellied heron nest at Zawa near Harachhu in the lower Punatsangchu basin. This inspired it to start a fully-fledged conservation programme.

Over the past 16 years, RSPN researchers have identified 22 nests, up to five active breeding pairs per year, and 14 active foraging localities, said Indra Acharja. 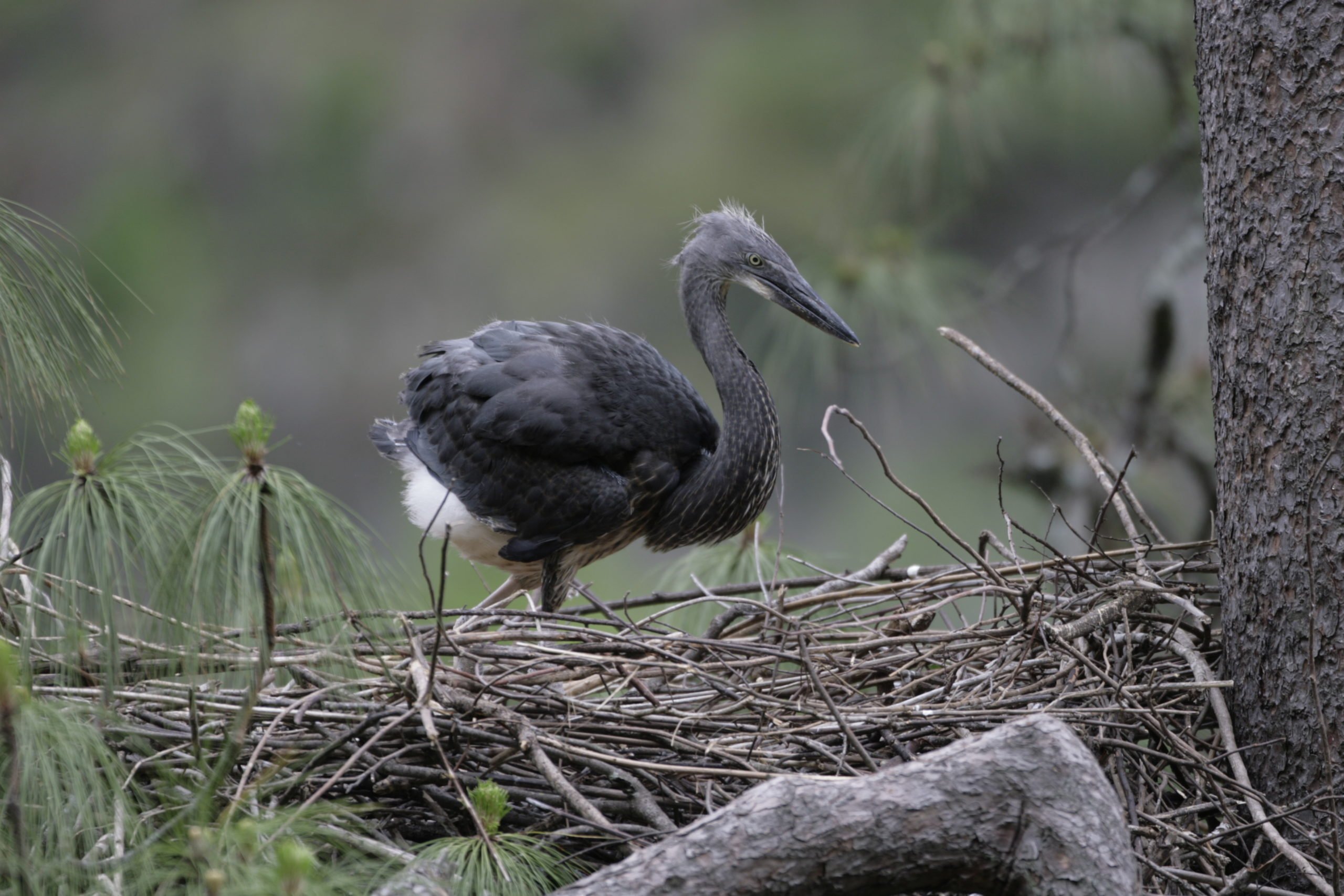 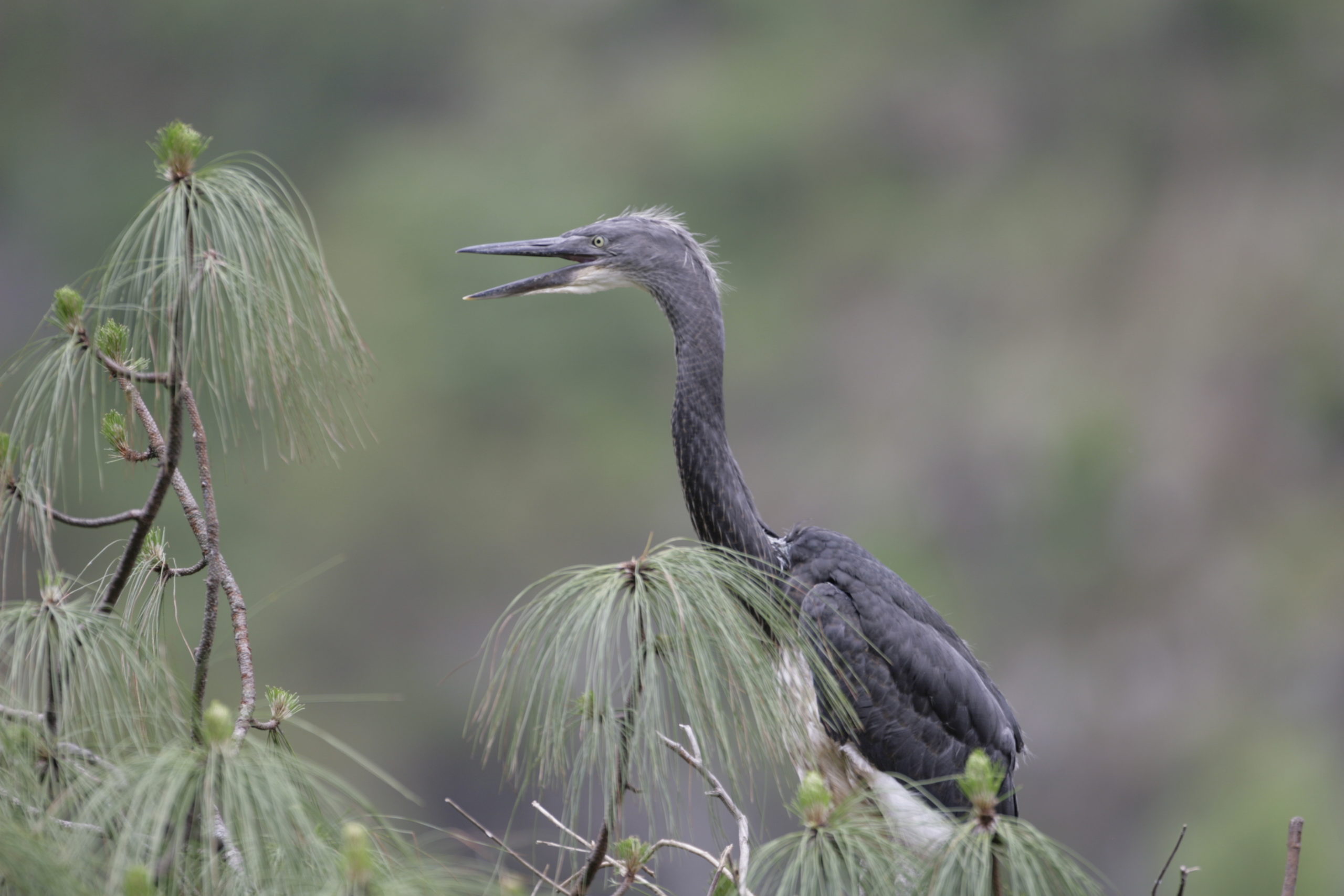 The white-bellied heron was first photographed in Bhutan in 1976 by the then-fourth king, Jigme Singye Wangchuck, at Phochhu in Punakha district. In Bhutan, the white-bellied heron is listed under Schedule I of the Forest and Nature Conservation Act 1995, meaning the species is totally protected and may not be killed, injured, captured or collected.

An ark for the white-bellied heron?

In 2011, RSPN in collaboration with the Department of Livestock and the Department of Forests and Park Services launched a pilot programme to breed white-bellied herons in captivity at Pochu in Bhutan’s central Punakha district. That year, the programme successfully hatched a chick, which survived and was later released into the wild.

This was followed, in 2015, by an international meeting titled, ‘Fostering international cooperation for conservation of the critically endangered white-bellied heron”. The meeting endorsed the need to build a captive breeding centre in Bhutan.

Indra Prasad Acharja told The Third Pole that the Punatsangchu hydropower project funded the construction of the new centre at Changchey in Tsirang district, southwestern Bhutan, which has now been completed. 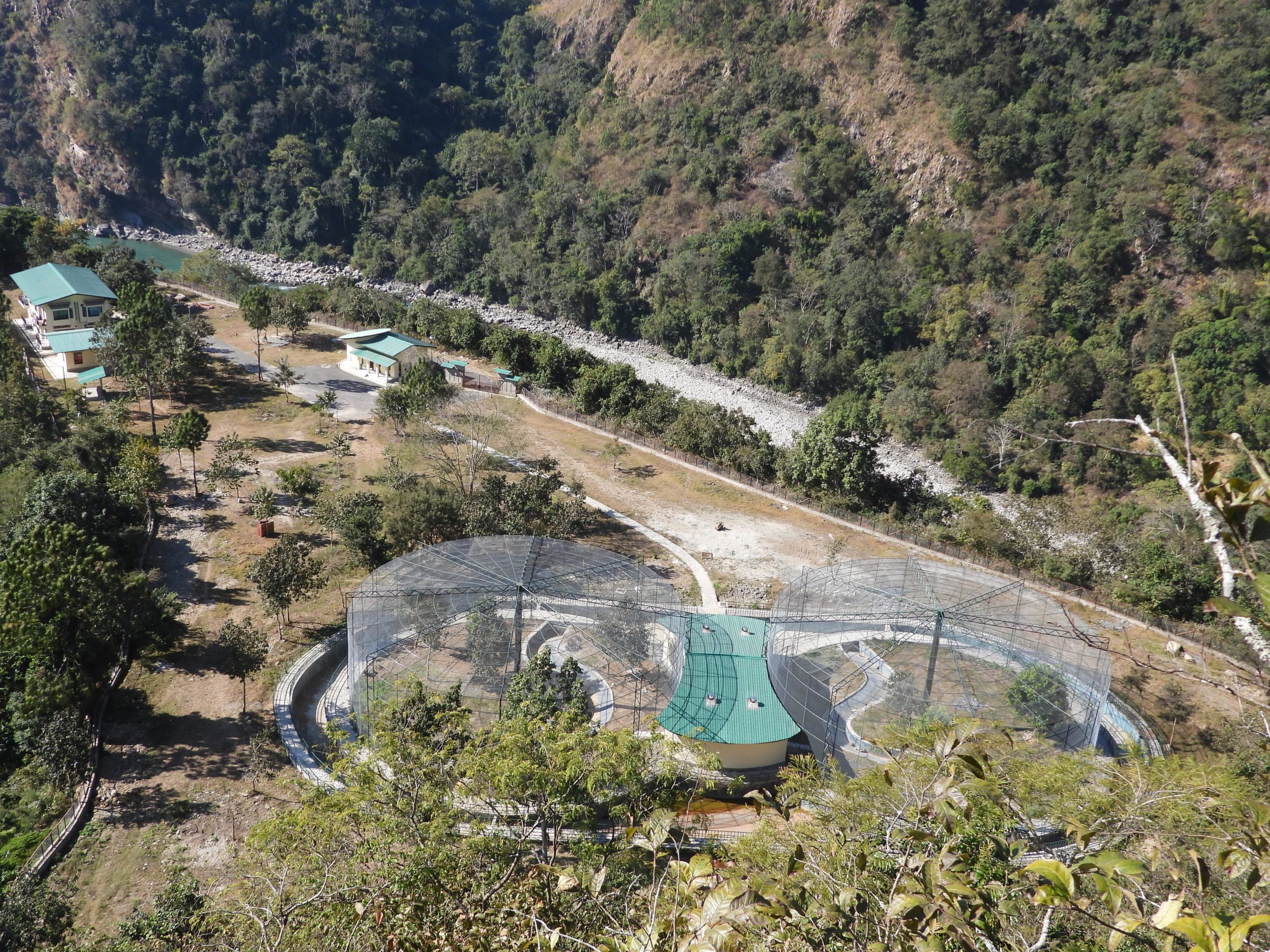 At the captive breeding centre, RSPN plans to hold a founder population, comprising birds captured from the wild, which they hope will breed and produce chicks that can be released into the wild with the aim of reviving the population. “Captive breeding is aimed to help address high mortality rates of juveniles due to predation and other calamities,” Acharja said, adding that the centre will also serve to maintain a gene pool for the species.

Taking some of the last individuals of a critically endangered species into captivity has proven to be a successful strategy for several other species, including the California condor. The last 27 wild individuals of this rare American vulture species were captured in 1987, and following captive breeding and release, numbers in the wild have now reached over 300. But with numbers so low, any mishaps during capture or captivity could be catastrophic, as happened when one of the world’s last vaquita – a porpoise endemic to Mexico – died after being captured for an abortive conservation breeding attempt in 2017.

Other conservation efforts are underway to protect the world’s last white-bellied herons. In Royal Manas National Park, where forester Damber Bdr is currently based, fishing is controlled by the Department of Forests and Park Services to preserve the heron’s prey. The Ministry of Agriculture and Forests also controls fishing in the Pochu and Mochu basins, as well as along the Punatsangchu River.

The RSPN has also worked to provide local people living in the areas where the species is frequently sighted with alternative income sources such as fishing ponds and organic vegetable farming, to help reduce dependence on nearby rivers for fishing. And it runs awareness and educational programmes on white-bellied heron conservation. 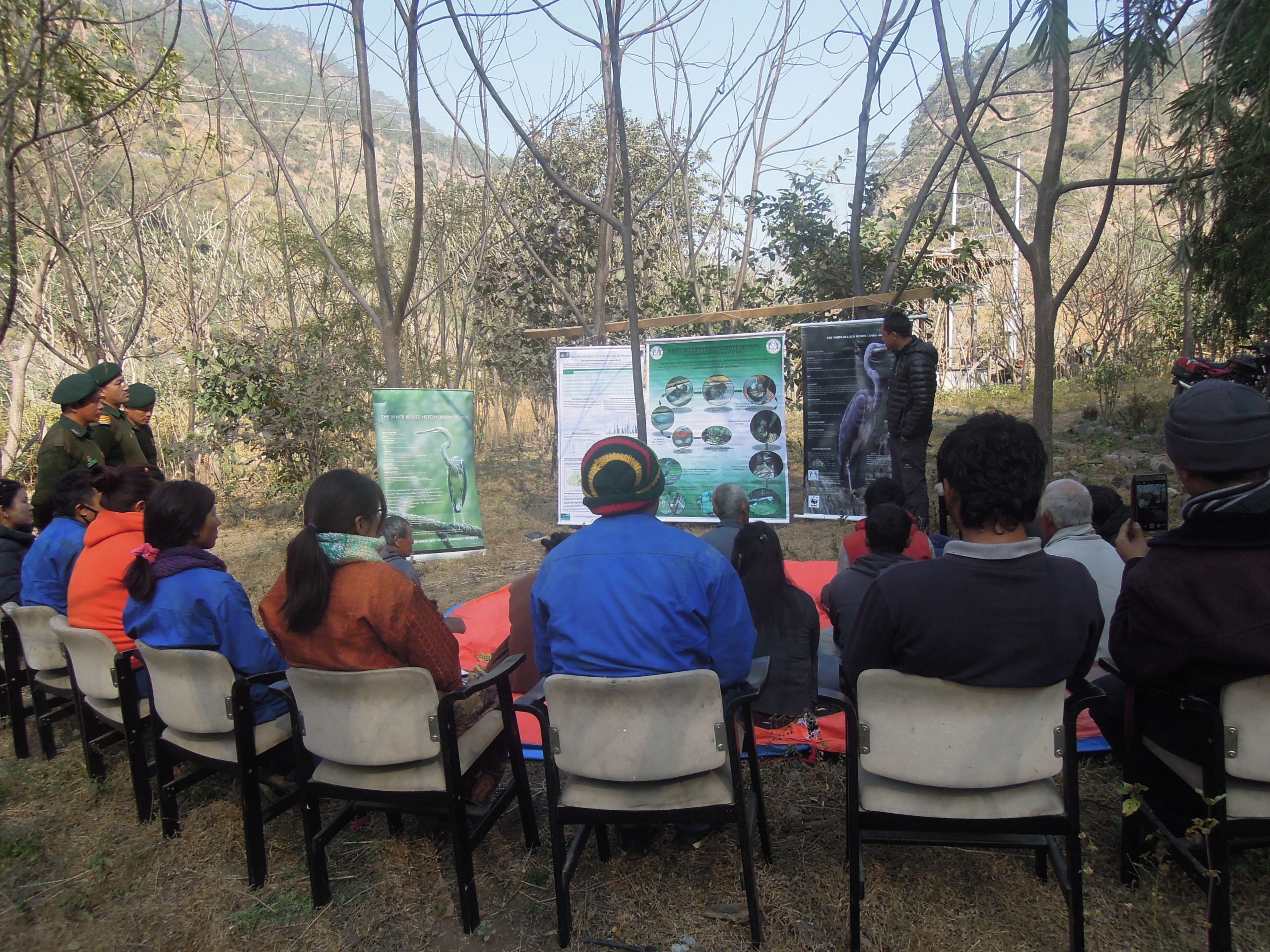 The RSPN conducting an awareness-raising session about the white-bellied heron at Taksha in 2016 (Image: RSPN)

“While we try to ensure white-bellied heron habitats are protected and free of human disturbances, the organisation is also faced with financial challenges,” said Indra Prasad Acharja.

Conservation of the herons is costly, explained Acharja, involving conducting annual surveys, protecting locations where the birds are frequently seen and funding local livelihood projects to reduce dependence on rivers for fishing. To study the movements of the herons, the organisation has been using small GPS units that are attached to the birds, each of which costs around USD 4,000, and in the case of the white-bellied herons tend to last for only around three months. “While we do receive financial support from both international and local supporters, we are still faced with financial challenges to cover all conservation expenses and also in need of financial support to conduct more studies,” said Acharja.

Yeshey Dorji is a photographer based in Bhutan, whose photographs of Bhutan’s birds have been featured in numerous books and magazines. The images of white-bellied herons featured in this article were the result of four years of effort.

The future of Bhutan’s hydropower

The future of Bhutan’s hydropower