“We are not against the ropeway or development. We are only concerned about the environment and local livelihoods,” said Sundar Singh, head of Palchan’s village council. “We want as few trees to be cut as possible and people to be consulted.”

A nine-kilometre ropeway is being built in the north Indian state of Himachal Pradesh. The electricity-powered aerial cable cars will carry tourists between Kothi, an ancient Himalayan village, and the Rohtang Pass, one of the highest passes in the Himalayas. Currently the only way to reach the Rohtang Pass is a two-hour drive on the congested road from Manali, a resort town near Kothi; the ropeway is expected to reduce this to about 20 minutes.

These projects are rarely planned in isolation. They are usually the precursors of development

Palchan is one of the villages near Manali whose residents have objected to the construction of the ropeway. Originally planned in 2010, the Rohtang ropeway project has been scrapped and revived multiple times, as the National Green Tribunal, India’s environmental court, insisted on it while locals resisted it. Many locals work as taxi drivers; Singh said that the development will lead to income loss for those who work as taxi drivers in his village and that the village council has suggested an alternative route.

Despite these objections, in October 2020 the formalities for construction of the ropeway were reported to be complete. 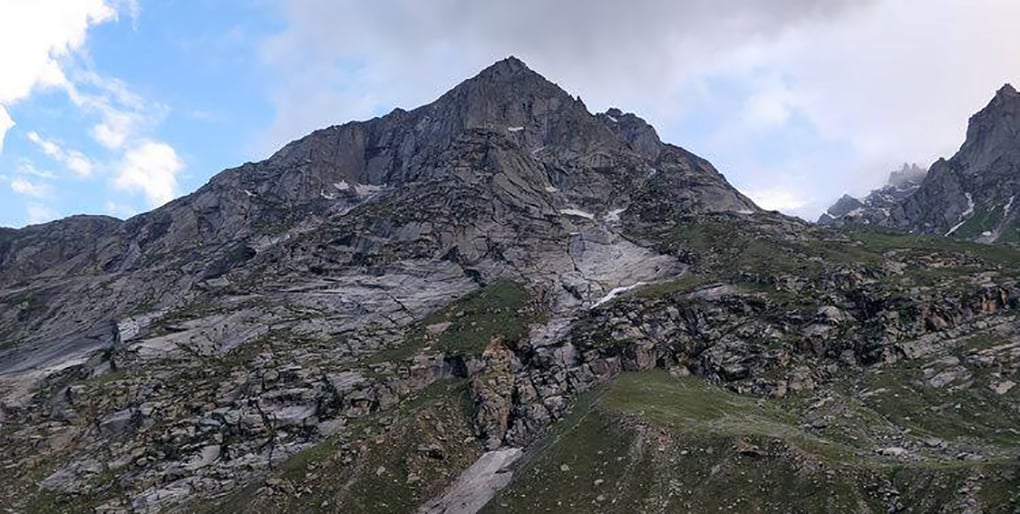 The road between Manali and Rohtang Pass, near Gulaba, where a ropeway is being planned [image by: Shubhra Mittal]

Since 2018, the Indian government has been advocating ropeways for tourism and urban transport. They are encouraged as a low-cost, low-energy form of transport and development that can reduce pollution. But experts and communities say they often have unintended consequences.

In the same month of the Rohtang ropeway project’s approval in Himachal Pradesh, a similar project was under discussion in the neighbouring state of Uttarakhand: the Haldwani-Nainital ropeway, first proposed in 2018. During a public interest litigation in the High Court of Uttarakhand, Ajay Singh Rawat, a professor and environmentalist, argued that the geology of the area would not support the project, as Nainital is sensitive and prone to landslides. On October 20, the court told the state Tourism Development Board and district magistrate of Nainital to meet Rawat and work out an alternative.

The Third Pole wrote to the district magistrate of Nainital and the Tourism Development Board asking for their response to Rawat’s arguments. This story will be updated if a response is received. 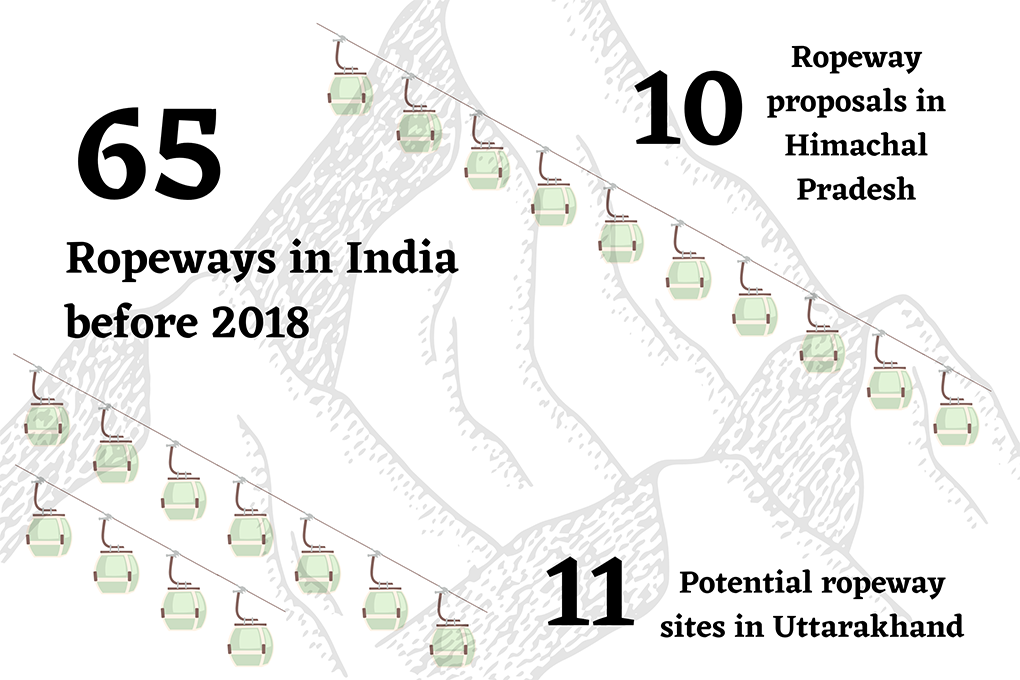 “Traditionally in the hills, particularly in Himachal Pradesh, ropeways used to be a cheap and effective way of going from a high point to a low point using the natural gradient of a hill. Apple trollies in Himachal are an excellent example of this. They were an environmentally sustainable and cost-effective alternative to roads, which were more expensive and infrastructure-heavy,” explained Manshi Asher, a researcher at Himdhara, a Himachal Pradesh-based environmental research and action collective.

Before 2018, there were 65 ropeways in India, with several others under construction or being considered, mainly in Himachal Pradesh, Uttarakhand and northeastern states. Then, in March 2018, the government’s policy think tank Niti Aayog released a draft public-private partnership agreement framework to guide state governments in the design and implementation of ropeway projects. In its foreword it noted that “there has been a renewed interest” in this “environmentally friendly” transit option. 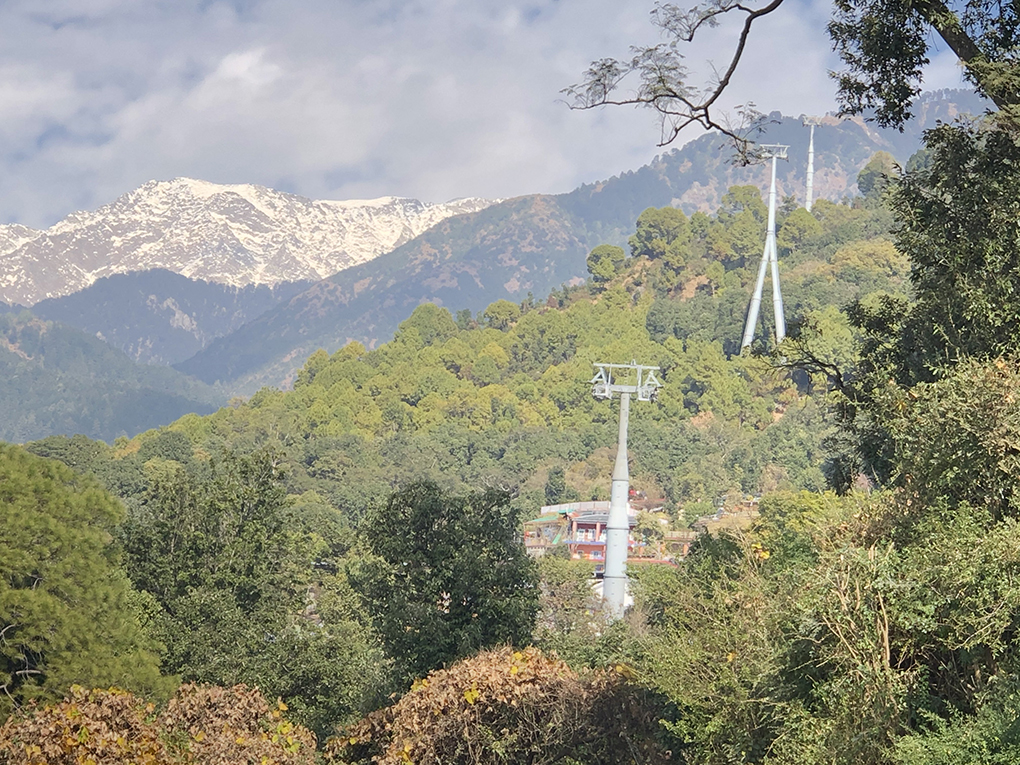 Towers being built for the Dharamsala-McleodGanj Ropeway [image by: Matthew John Hogan]

Uttarakhand’s tourism policy for 2018 lists 11 potential ropeway sites, with its tourism and hospitality department pursuing five routes actively. Himachal Pradesh has similar plans. The Ropeways and Rapid Transport System Development Corporation lists 10 ropeway proposals at various stages of planning in the state. The Indian government has signed a memorandum of understanding with Doppelmayr, an Austrian ropeway development company, for projects in the cities of Shimla and Manali. And feasibility studies are being planned for cable cars in the northeastern states of Mizoram and Sikkim.

Rawat told The Third Pole that ropeways should be avoided in the entire Himalayan region unless the rocks are strong. “Take the case of Haldwani-Nainital project,” he said. “The point where the terminus is to come up is an exceptionally sensitive area. The entire hill there is made up of calcium carbonate. Ropeways may be environmentally less harmful in general but not in the fragile ecosystems of the Himalayas. In the Himalayas, they should be constructed only if geological studies and environmental impact assessment reports don’t highlight any serious concerns.”

No green rules for ‘green projects’

Exploiting ropeways’ benign image, the Ministry of Environment, Forest and Climate Change (MoEFCC) proposes to keep them out of the purview of the 2020 iteration of the Environmental Impact Assessment (EIA). The EIA notification sets the appraisal procedure for all infrastructure and development projects, including preparing an EIA report and environment management plan, conducting a public consultation and appraisal by an expert panel. In its 2006 version, which is currently in effect, ropeways to be situated at an altitude of 1,000 metres or in ecologically sensitive areas undergo the highest level of scrutiny. The 2020 version says an appraisal is only necessary for ropeways in ecologically sensitive areas – but even that is devoid of an EIA report, a management plan and a public consultation.

Almost all the sites identified by the governments of Himachal Pradesh and Uttarakhand are at or above a height of 1,000 metres or are in ecologically sensitive areas (if not both). The 2020 draft EIA, which was released in March 2020, led to an unprecedented number of submissions from the public, most of which rejected the draft. The proposal is currently under consideration by the MoEFCC.

Furthermore, in June 2019 the MoEFCC did away with the need for forest clearance to develop ropeways in Himachal Pradesh, at the state’s request.

Ropeways do have an impact

In February 2010, the then Ministry of Environment & Forests released an EIA guidance manual for ropeways. This lists a wide range of impacts including change in topography and drainage pattern, soil erosion and contamination, loss of forest cover, habitat fragmentation, blocking of migratory corridors, damage to historically important sites, exploitation of ground/surface water, emissions from vehicles and generators, impacts of vibration and waste generation.

Asher said, “Unlike the traditional use of ropeways in the hills, the current thrust is connected with tourism and commercial purposes. They will open up those hilltops for tourism which were earlier accessible to people only on foot. Take the Chamunda Devi ropeway in Himachal: so far only those who are really keen and capable take the trek, many don’t. Imagine the increase in footfall in those pristine high-altitude areas once the ropeway comes through.”

Asher added, “These projects are rarely planned in isolation. They are usually the precursors of development.” For example, a hotel, fast-food centre, shopping complex and a parking lot will be constructed as a result of the Haldwani-Nainital ropeway.

“Opening up areas to tourism without any cumulative assessment of impacts on hill ecology, wildlife and local livelihoods, risk evaluation, and carrying capacity studies could be dangerous,” warned Asher. 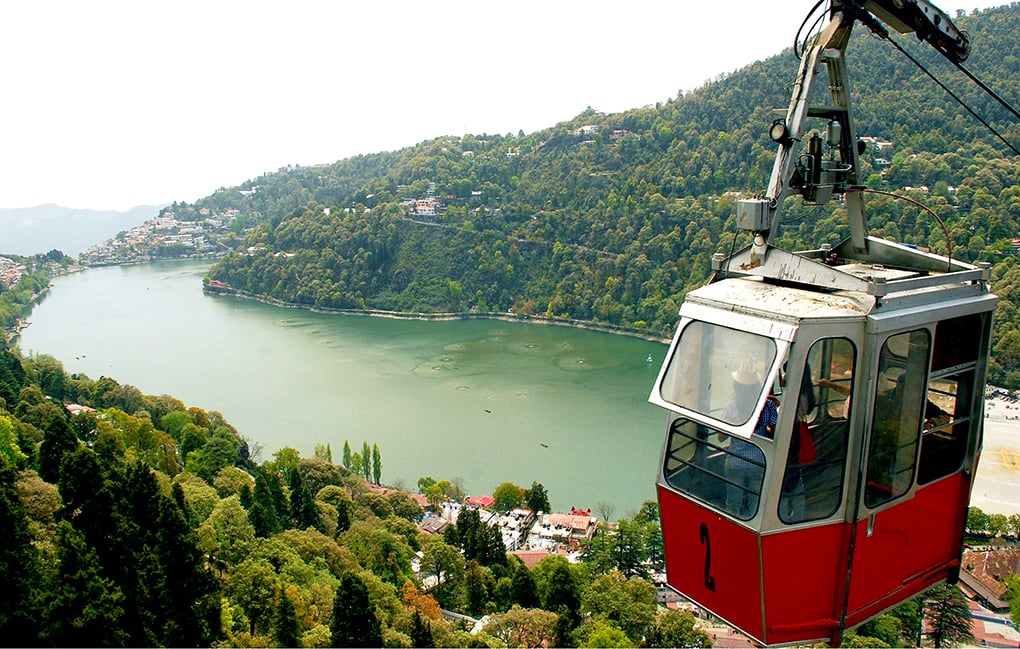 Ropeway at Sher-Ka-Danda in Nainital [image by: Ajay S Rawat]

Previous ropeways have had negative impacts in the Himalayas. Researchers found that one built in Nepal in 1998 destroyed the existing drainage corridor, causing heavy flooding and erosion in the monsoon of 1999. In 2017 researchers inferred that the cable car “took a large piece of locals’ share in the economic profits leaving the village with the entire burden and few profits.” In the construction of the Jakhu ropeway in Himachal Pradesh, over 100 Deodar trees, some of which were over 200 years old, were cut down.

Even when rules exist, loopholes are exploited. In 2019, the government of Himachal Pradesh categorised the Rohtang ropeway as a linear project similar to roads and railways, and bypassed the need for a No Objection Certificate (NOC) from Palchan village. According to a 2013 circular regarding the diversion of forest land under the Forest Act 1980, linear projects do not need a village council’s consent.

“People of my village were not satisfied with the proposal, I could not issue an NOC without their consent,” explained Singh. On the categorisation of the Rohtang ropeway as a linear project he exclaimed, “I have not received any official letter confirming that an alternate law has been used to bypass the need of NOC. If it is true, it is unfortunate.”

In the future this type of NOC may not even be needed. The upcoming regulations in the 2020 EIA describe them as ‘green’ and underplay their impact on hill ecologies and livelihoods. If the draft is unaltered, ropeway developers will no longer need to find ways to bypass legislation.