A ten feet by eight feet room, made of plastic and thin bamboo, accommodating 11 members of his family, is like ‘heaven’ for Rohingya refugee Mohammad Saadiq, aged 50 and a father of eight children.

“Nobody comes to my room and shoots,” Saadiq told thethirdpole.net. “Thanks to Allah for giving us this little space to sleep peacefully at night,” he said, recalling that the Myanmar security forces used to enter the houses of the Rohingya Muslims and whisk away young men and pretty girls.

He said that in September 2017 the Myanmar military killed his brother, destroyed his home in Maungdaw, and sprayed bullets when he and other Rohingya were fleeing.

“We, the Rohingya, cleared the forest here to make our houses. We sleep like the way the traders place fish in a basket. Nobody can move while sleeping. But I have no complaint. At least we have a shed where we can sleep without fear,” said Saadiq.

He is unaware of the lurking danger that has been created by clearing the rainforests where he, and the other refugees, now live. “What would happen?” Saadiq asked, when told there might be a danger of landslides. 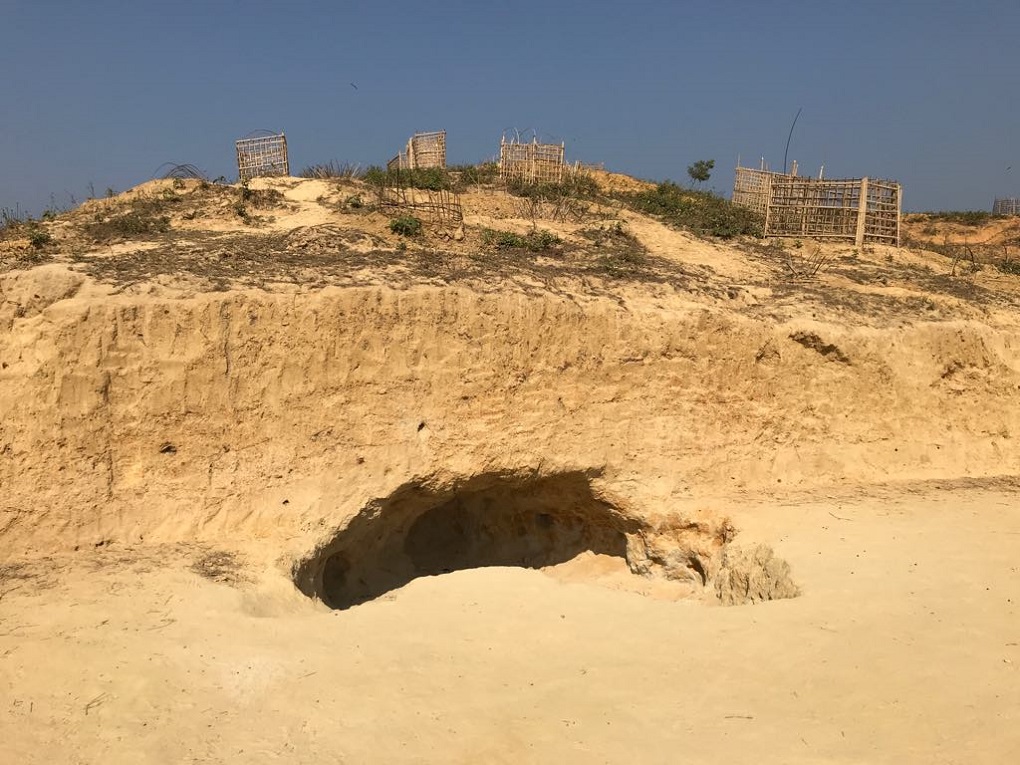 Even before advent of the rainy season starting in mid-April, the earthen hills start caving in, posing a great danger [image by: Kamran Reza Chowdhury]

A forest that vanished

The office of refugee relief and repatriation, which functions under Bangladesh’s disaster management ministry, acquired 3,000 hectares of forestland in Ukhiya, Cox’s Bazar to make settlements for hundreds of thousands of Rohingya refugees who fled from Myanmar into Bangladesh.

Most of the refugees have been housed in shanties in Balukhali, Kutuplaong, Madhurchhara, Lambarshiar, and other camps in Ukhiya and Teknaf. According to the United Nations High Commissioner for Refugees (UNHCR) Balukhali-Kutuplaong camp is currently world’s largest refugee camp housing around 570,000 Rohingya.

There is now not a single tree to be seen on the Ukhiya hills, which was once covered by dense forest inhabited by elephants and other wild animals.

Farid Uddin Ahmed, executive director of Aranyak Foundation, also known as Bangladesh Tropical Forest Conservation Foundation, said the forest in Ukhiya used to have species such as Dhakijam (Syzqium grande), Chapalish (Artocar), Gorjon, Gamari, and other trees not commonly found in other parts of Bangladesh.

“There is not a single tree left in the entire area. The poor Rohingya have even extracted the roots of the trees to use those as fuel. Setting up the refugee camp here has destroyed the whole forest land,” he said.

He said the trees in the Ukhiya hills would not regenerate.

“The forest and its rich biodiversity have gone forever. We have to go for fresh plantation,” said Ahmed. 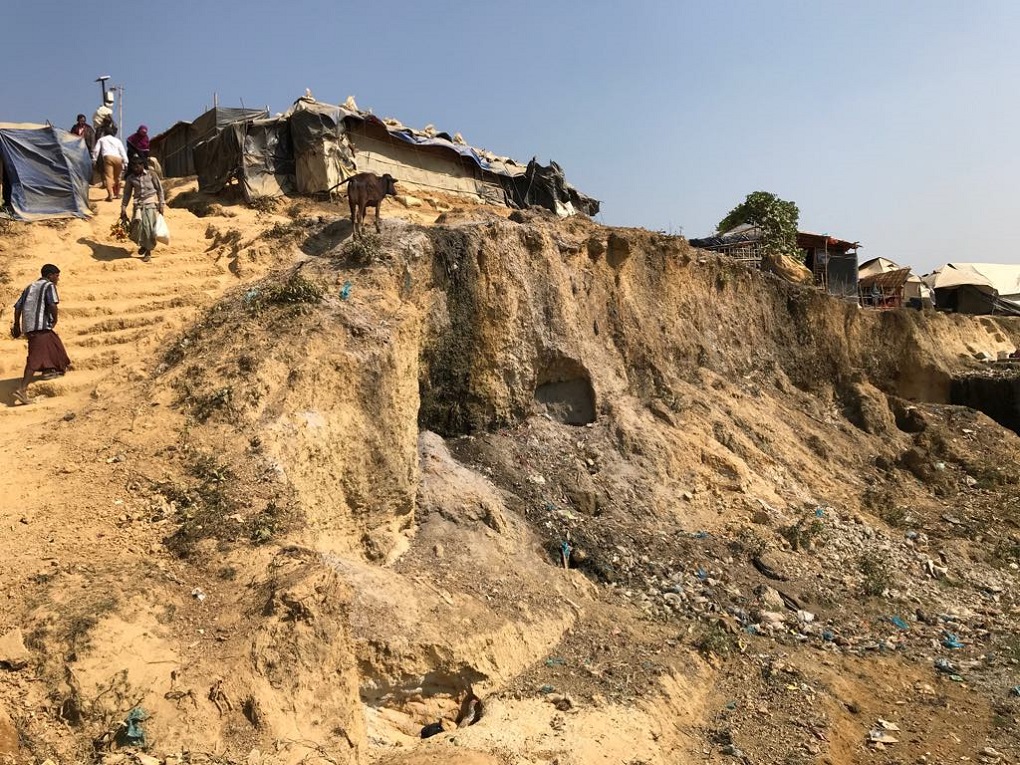 Water is also scarce, as groundwater levels have fallen remarkably since December due to tube wells. Rahima, who came to Kutupalong in early September last year, knows the problem in getting water at the camp.

“Then (in September) I had to push the handle 10 to 15 times to fill a pitcher (10 litres). Now, I have to push at least 30 times to get same quantity of water. In some hilly areas, the situation is harder,” she told thethirdpole.net.

Mohammed Malek said that accessing potable water was becoming tougher day by day, with tube wells that were 50 feet deep running out of water, and deeper ones having to be drilled.

UNHCR carried out an assessment of the danger the Rohingya at the camps would face in the coming monsoon season.

“The findings of an initial risk analysis, mapping the world’s largest refugee settlement area in Kutapalong and Balukhali … indicate that at least 100,000 refugees could be in grave danger from landslides and floods,” said a statement released by UNHCR spokesperson Andrej Mahecic in early February.

The assessment was carried out by UNHCR, the International Organization for Migration, the Asian Disaster Preparedness Centre and others, in close coordination with Dhaka University. It “suggests that up to one third of the settlement area could be flooded. As a result, more than 85,000 refugees could lose their shelters. Another 23,000 refugees living on steep slopes within the site could be at risk of landslides,” said Mahecic.

He added that key services in the settlement, installed by humanitarian agencies working with the Government of Bangladesh, are also at risk of being washed away, including latrines, washrooms, tube wells, and health centres.

AMM Amanatullah Khan, a professor at the geography and environment department at Dhaka University, told thethirdpole.net that the Rohingya settlement on the hilltop in Ukhiya, Cox’s Bazar was very vulnerable.

“You do not need to be an expert to understand their vulnerability. The area where the refugee camps have been set up was full of trees and herbs. The trees keep the soil compact and deterred soil erosion,” he said.

Now the area has no trees and roads have been cut into the hillside. This means the rain will fall directly on the soil, leading to landslides, or collapsing the soil.

“The rainy season is a couple of months away. So, I am afraid that there could be loss of life due to landslides. By creating a refugee camp in the hills, we have just destroyed a unique forest with rich biodiversity,” he said.

Khan said extraction of ground water would add salt to the injury, and the slump in the ground water level could also aggravate the risk of landslides,” he said.

The water situation at other camps in Teknaf sub-district is worse than the government-recognised camps in Ukhiya. As Teknaf is a bay facing area, the Rohingya refugees face serious problems in getting potable water for daily necessities.

Some NGOs have trying to provide water at the Leda and Unchiprang camps, which accommodate around 100,000 people.

“We have been collecting water from the nearby streams and providing it to the camps. But we do not know what would happen in the coming days,” an Oxfam official told thethirdpole.net.

“Every day the groundwater level is going down. We keep our pitchers in long queues for hours to get water from the tube wells,” Mokhlesur Rahman, a Rohingya refugee living at Leda camp, told thethirdpole.net.

The refugee relief and repatriation commissioner Mohammad Abul Kalam told thethirdpole.net that the Leda and Unchiprang camps were not recognised by the government.

“We are aware of the water crisis there. Some NGOs and INGOs have been working to provide water for them,” he said.

Refugees from their country, the Rohingya thirst for water, but the water that will come from the rains in the near future promises to be no cure to those camped on denuded hills.