In 1838, German biologist Johann Jakob Heckel published a book, Fische aus Caschmir. In it, he documented the presence of 16 fish species in Kashmir, 12 of which were of the snowtrout genus Schizothorax.

“Only five of them could be found now,” said Feroz Ahmad Bhat, an assistant professor and head of fisheries resource management at the Sher-e-Kashmir University of Agricultural Sciences and Technology (SKUAST). “Even these remaining fish are under stress and their numbers are progressively declining.”

The past 40 years have been particularly brutal for the riverine ecology in this region of northwest India, as pollution, encroachment and water diversion have increased, adding to longer-term problems such as the introduction of non-native species. In recent years a new threat has emerged: riverbed mining.

Stone crushers spring up in Jammu and Kashmir

The Veshav River in south Kashmir is a major tributary of the Jhelum. Its waters are home to native snowtrout, as well as brown and rainbow trout, which were introduced to Kashmir. Along a 35-kilometre stretch of the Veshav, there are six points where boulders and gravel are taken from the river and crushed. 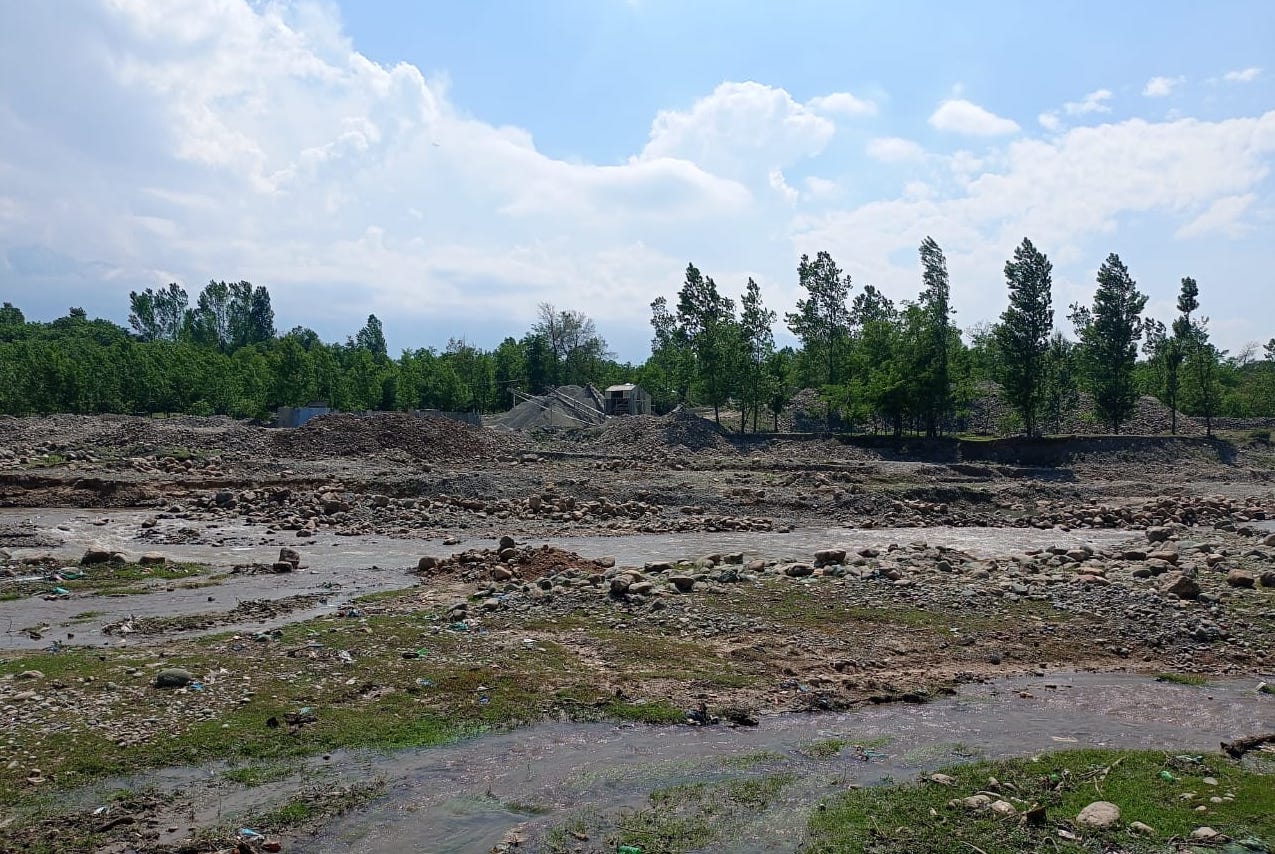 “Two of these stone crushers are along the 15-kilometre stretch of the stream from Aharbal [a hill station] where trout thrive,” said Shabir Ahmad, an inspector in the Jammu and Kashmir Department of Fisheries whose job is to monitor the Veshav. “And four others are located along the stretch populated by Schizothorax, which also need trout-like habitat to breed.”

Schizothorax and trout depend on gravel and boulders to feed and breed. The extraction of these materials threatens their long-term survival. “Trout need cold, fresh waters and a food of aquatic insects and crustaceans, which is largely found on the rocks,” said SKUAST’s Bhat. “Ditto for Schizothorax. Rock crushing will not only damage the habitat but also pollute the waters, both detrimental to fish survival.”

There are three stone-crushing machines on the banks of the Bringi, another major river in the area, said Shabir Ahmad. And Lidder, a river said to be home to the finest trout in the world, has two crushers, now a familiar sight across the region’s rivers and streams. 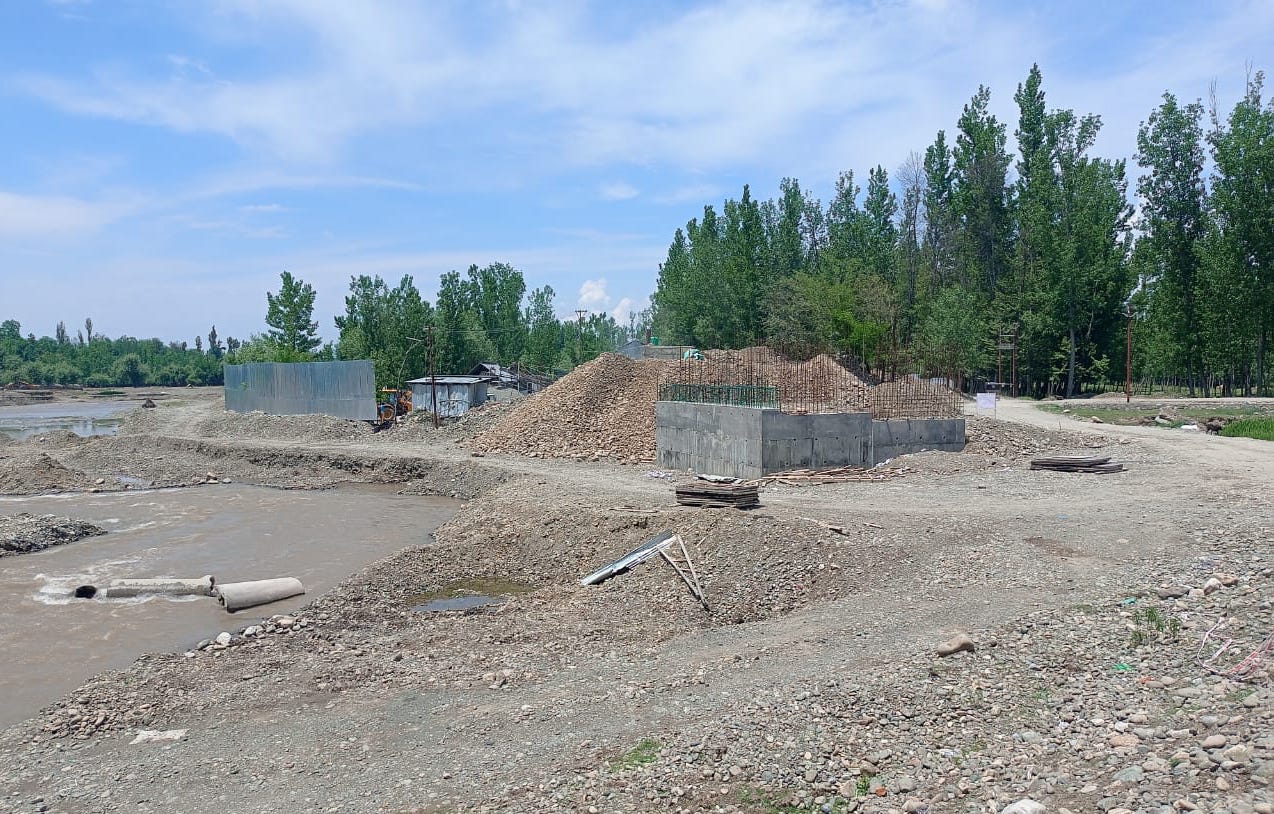 The regional government has recently permitted the establishment of more stone-crushing plants. According to a list seen by The Third Pole, between October and December 2020 the region’s Department of Fisheries issued No Objection Certificates (NOCs) for around 130 additional stone crushers, 70 of them in the Kashmir Valley.

In late February, the administration created new rules for stone crushers and ‘hot and wet mixing plants’ (where stones and gravel are processed), dispensing with the previous requirement for a licence. The rules simplify the process of establishing a unit by reducing the requisite clearances to just two documents: Consent to Operate (CTO) from the region’s Pollution Control Board and an NOC from the relevant district administrator.

Rock crushing will not only damage the habitat but also pollute the waters, both detrimental to fish survival

Moreover, the issuing of NOCs has been brought under the J&K Public Services Guarantee Act, 2011, making it mandatory to issue the document within 30 days. This leaves little time for due diligence, much less an assessment of the environmental impact of the proposed stone crusher, which means assessments may be being done on paper only.

Riverbed mining is on the rise globally, with up to 50 billion tonnes of sand and gravel being extracted every year. This is driven particularly by growth in the Asia Pacific region, and the booming construction industry.

“The NOCs would encourage deployment of heavy machinery to extract boulders and gravel,” warned A R Yousuf, a former member of the National Green Tribunal, India’s environmental court. “Imagine what this would do to the streams if the mining goes unchecked.”

Raja Muzaffar Bhat, a Right to Information and environmental activist, said the NOCs for stone crushers should be repealed, and mining prohibited along the trout streams.

“The rock crushing and the other kind of mining will despoil and destroy trout streams,” Bhat said. “After having protected trout streams over the last century, how could the government be a party to their destruction?”

Makhdoom Mohiuddin, deputy director of the Department of Fisheries, told The Third Pole that his department is taking every care to maintain the health of the trout streams.

Commentators trace the relaxation of environmental regulations in Jammu and Kashmir to the undercutting of Article 370 in August 2019. This Article in the Indian Constitution allowed the local government to retain certain rights, such as limiting mining contracts to locals of Jammu and Kashmir. Now this is open to people from outside the region.

“There have been rushed approvals for the mining contracts in water bodies,” said Bhat, the RTI and environmental activist. “As a result, little attention has been paid to the environmental fallout of the new contracts.”

A potential enabling factor in the current permitting boom may be the lack of implementing regulations in the 2018 Fisheries Act that replaced the Jammu and Kashmir Fisheries Act, 1903. “Though a new fisheries act is there, the rules that would have defined circumstances for its implementation are yet to be issued,” said Mohammad Hussain Wani, a fisheries scientist, who has now retired from the department. “This has created scope for violations.”

The situation, Wani added, is unlikely to improve unless the government takes a more serious view of the situation.

Mohiuddin, from the Department of Fisheries, said he wants the rules to be defined to give “clarity” to the implementation of the 2018 act. “Our staff on the ground bar illegal mining and any violation of the contract by the stone crushers,” Mohiuddin said, adding: “We have fined and filed cases against the violators.”

But, for now, the government is encouraging mining of Kashmir’s water bodies. This is made easier because of a lack of forceful environmental activism in the Kashmir Valley.

Bhat wants to end the silence, but the constricted political space in Kashmir stands in the way. Even before 2019 civil society activism was difficult in the region; it has since become harder. After Jammu and Kashmir’s special status was removed, the government jailed politicians and civil society activists. Last year, the office of the J&K Coalition of Civil Society, a Srinagar-based civil liberties group, was raided.

Over the past century, there has been a decline in native species like snowtrout in the Kashmir Valley. The International Union for Conservation of Nature lists a number of Schizothorax species as vulnerable or critically endangered on its Red List of threatened species.

Experts cite the introduction of non-native trout and carp in the Kashmir Valley over the past century, rising pollution levels, encroachment and diversion of water as reasons for these declines.

In particular, the introduction of brown trout in the early 1900s affected the breeding success of Schizothorax species.

We are losing Schizothorax. And if stone crushers are not prevented from ravaging the habitat of trout, we might soon start losing exotic fish too.

“The trout, being a carnivorous fish, started eating the eggs and the fingerlings of Schizothorax,” said Imtiaz Ahmad Khan, a faculty member in the Department of Zoology at the University of Kashmir. “It also grew faster and in larger numbers, thus crowding out the local fish.”

Populations of brown and rainbow trout are now in turn threatened in Kashmir – not by other exotic fish, but by increasing human intervention, facilitated by the government.

The livelihoods of thousands of people is at stake. In the section of the river populated by Schizothorax, there are around 450 fishers registered with the fisheries department. “They catch around 150 tonnes of fish annually,” said Ahmad, the Department of Fisheries official.

Over 600 tonnes of trout is produced annually in the Kashmir Valley across government-established hatcheries and the private sector, making Kashmir one of the largest sources of the fish in South Asia.

This excludes wild trout, a big draw for the tourists to the Kashmir Valley. The Veshav attracts around 250 anglers a year, each catching an average of 3-5 kilogrammes of fish a day.

“There’s an urgent need to put a check on indiscriminate mining,” said activist Bhat. “We are losing Schizothorax. And if stone crushers are not prevented from ravaging the habitat of trout, we might soon start losing exotic fish too.”

Pollution pushes indigenous people to brink of extinction in India

Monks on hunger strike for the Ganga