The resurgence of the greater one-horned rhino is claimed as one of Asia’s greatest conservation success stories. After hunting and habitat loss drove the species close to extinction in the 20th century, sustained conservation efforts and collaborative partnerships brought the species back from the brink, as seen in Nepal’s 2021 rhino census.

The entire global population of the greater one-horned rhino, numbering around 3,500, is restricted to a few protected areas in northeast India (such as Kaziranga National Park in Assam) and Parsa, Chitwan, Bardia and Shuklaphanta national parks in Nepal.

To establish just how many rhinos are currently living across Nepal’s protected areas, the country’s Department of National Parks and Wildlife Conservation announced the National Rhino Count 2021. On 22 March, Prem Bahadur Ale, the minister of forests and environment, inaugurated the count by deploying 60 domesticated elephants and 250 people in Chitwan National Park.

Luckily, I got the chance to be part of the rhino count in Bardia National Park with the National Trust for Nature Conservation (NTNC). Through this opportunity, I was able to understand both rhino ecology and the challenges the species still faces in Nepal.

These rhinos have had a turbulent time. Despite the initial success of the translocation, during the armed conflict in Nepal rhino populations were heavily poached. This nearly wiped out rhinos in the Babai Valley area of the park between 2002 and 2006, where most of the rhinos had been moved.

Eight more rhinos were moved from Chitwan to the Babai Valley between 2016 and 2017, bringing the population across the park to 37 by the end of 2017.

The 2021 count gets underway

For the count this year, Bardia National Park was divided into two parts: the Babai Valley and the Karnali floodplain, which was in turn further divided into five sub-blocks. The census methodology used to assess the size and structure of the rhino population was based on the ‘sweeping’ technique, used in previous rhino censuses in the country. 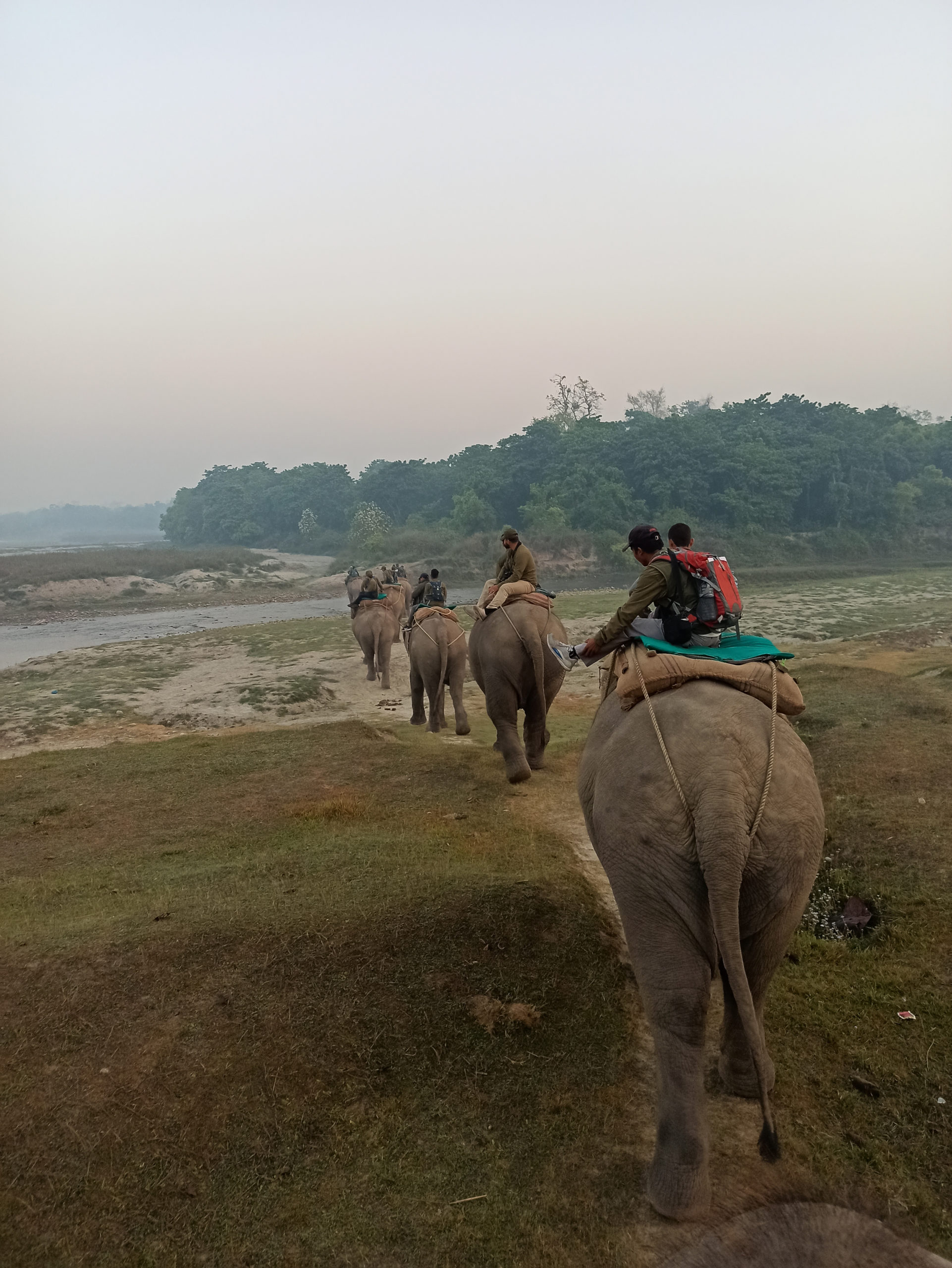 On 30 March, the 60-person team set off towards the Bardia-Katarniaghat Forest Corridor sub-block atop 10 elephants. I was riding elephant number five, Dipendrakali. I was excited, but nervous. I knew the dangers we would face.

Counting rhinos is not easy. Monitoring teams must risk wild animal attacks and unpredictable domesticated elephants. Seventy per cent of Bardia National Park is covered with dense forest, and the risk of encountering tigers and wild elephants is high. A 2018 tiger survey counted 87 adult tigers in Bardia, but since then increasing tiger sightings and tiger-human conflict have indicated a growing population.

The elephants stood in line, with about 100 metres between each elephant. We had to count the rhinos and take as many and as clear photos as possible, so they could be used to build an identity profile for each rhino – all this without disturbing them. Each time we saw a rhino, we were to record its sex, age, the habitat it was in and significant identifying features. We were also to collect information about invasive species in the rhino habitat, to help inform habitat management.

After trudging through the bushy riverine forest for about two hours, I heard the typical snorting and honking sound a rhino makes

I did not see a single rhino the first day, leaving me so disappointed that I went to the internet that evening, seeking motivation through a quotation on achievement and hard work.

On the second day, we set off at 6.30 am to the Hattisar-Baghmachan/Lamkighagar sub-block to resume our search. After Dipendrakali had trudged through the bushy riverine forest for about two hours, I heard the typical snorting and honking sound a rhino makes. I directed my mahout (elephant driver) Suresh to head towards the sound.

Some moments in our lives leave an indelible impression on us, such as the first day of school, the last day of college, or the first time we witness the magnificence of the Himalayas. Similarly, seeing a wild animal in its natural environment can provide tremendous joy and a proud memory that lasts a lifetime. It was not the first time I had seen a rhino in the wild, but the whole atmosphere of the National Rhino Count was different. 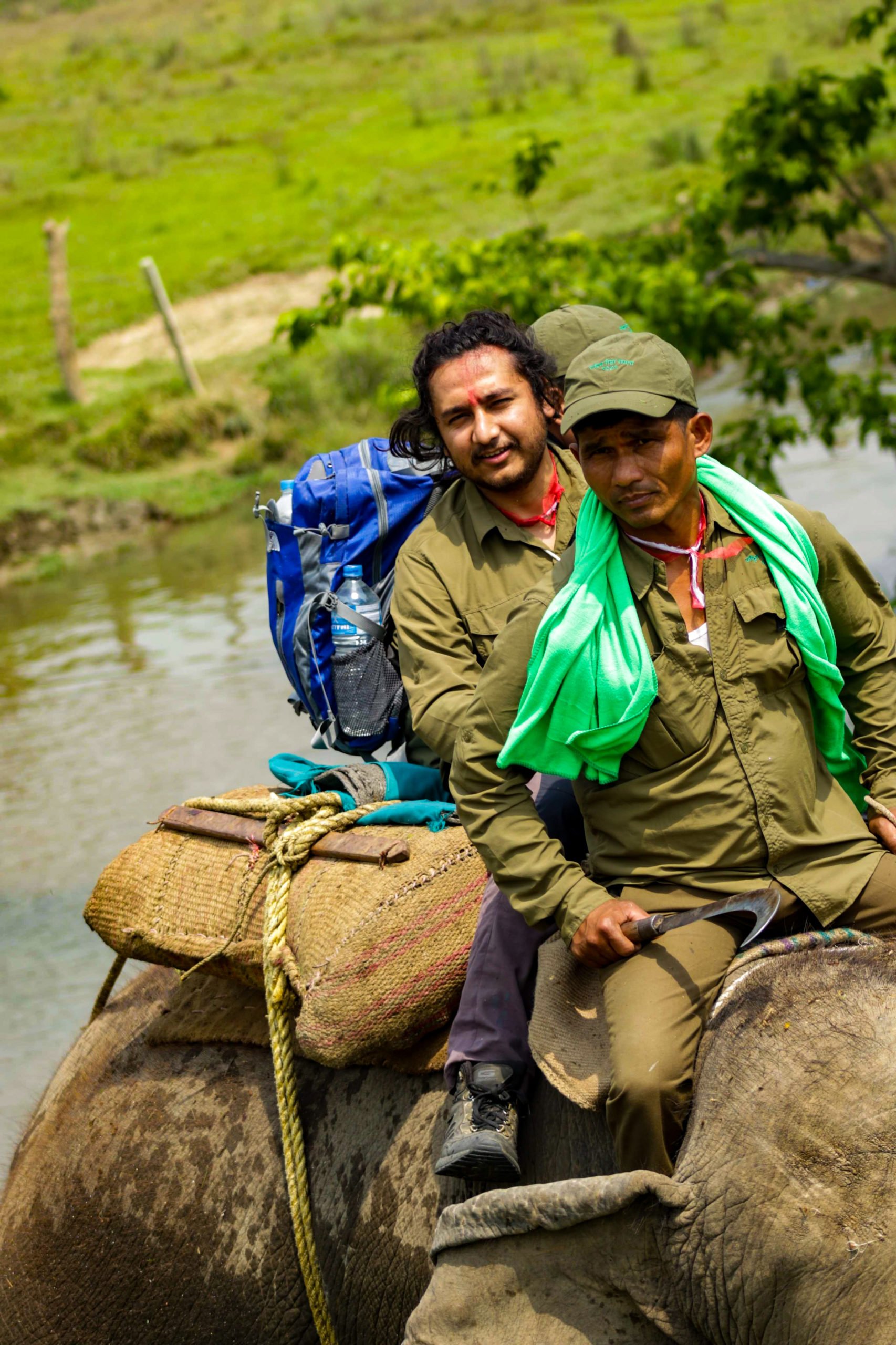 The author with mahout Suresh on the elephant Dipendrakali during the 2021 rhino census in Nepal’s Bardia National Park (Image: NTNC)

There were two rhinos – a mother, a gorgeous megaherbivore with a large horn, and her calf. The mother was enraged, making a lot of noise and attempting to get away from us.

I had not realised earlier that a giant rhino could hide so flawlessly behind a tree. We could not see the mother and the calf properly through the shrubs and the tree branches. Holding on to a rope, I stood up on the elephant’s back.

We waited until the pair walked out into the open, towards the river. Now we could identify them. From their features, I could tell that the mother was ‘Sibu Pothi’, identity number 24, and the calf was a male, ‘Kingfisher Calf’, identity number 42. After taking lots of photos and recording data, I could finally breathe.

The sight of that first rhino pair gave me confidence and fuelled my desire to keep looking for rhinos, even in the scorching midday sunlight. During the survey, I was able to record five rhinos in the Karnali floodplain block. Each day, we would head back to camp with cramped backs and legs from hours spent riding elephants, as well as scratches and scars from tree branches and thorny bushes. But as soon as we returned to camp, our expressions would change as we shared stories, all incredibly enthusiastic about the rhino count and wildlife conservation.

However, the dangers of the rhino count were to prove all too real. On 2 April in Chitwan, several teams were injured when a wild elephant pursued and attacked the domestic elephants used in the count, causing them to panic and run amok.

Then, on 4 April 2021, tragedy struck our team in Bardia National Park when a mahout who was part of the counting team was mauled to death by a tiger. After completing the rhino count for that day, a few of us enumerators had returned to camp around 2 pm. Three hours later, we got a message: “Policeram, the mahout has been killed by Tiger”.

Quickly, in coordination with park authorities and the Nepali Army’s Devidatta Battalion, we reached the spot. We deployed a camera trap to identify the tiger, and an NTNC team climbed nearby trees with tranquilliser-loaded dart guns to wait for the tiger to return to the kill.

I realised how uncertain life is, how anything can happen anytime

The tiger returned around 7 pm and was promptly darted. His health was checked, and he was medicated; then he was carried in a cage and taken to the park headquarters. The plan was to shift him to Kathmandu Zoo, because we knew from the photographs that this tiger had killed three other humans between 5 November 2019 and 16 March 2021.

All of us were in shock. We had surveyed the same area. I realised how uncertain life is, how anything can happen anytime. We cannot really predict and plan.

Policeram’s family received a compensation of 1 million Nepali rupees (about USD 8,500) from the government, and 50,000 rupees from the NTNC.

The rhino count ended on 10 April. The Department of National Parks and Wildlife Conservation announced an overall increase of 16.6% in the one-horned rhino population, from 645 rhinos in 2015 to 752 in 2021. In Bardia National Park, 38 rhinos were recorded, seven in the Babai Valley and the remainder in the Karnali floodplain. This was an increase of nine, from 29 in 2015.

Despite the increase, rhino conservation in Bardia faces challenges. Covid-19 has left many people jobless and forced to return home. Some may be drawn to poaching. Nepal’s rhinos are particularly vulnerable to flooding during the monsoon because their preferred habitats are floodplain grassland, wooded grassland and riverine forest. The floodplain in Bardia is smaller than the one in Chitwan. For the rhino population of Bardia to continue to grow, more floodplains with adequate food and wetlands are required.

Why have tiger attacks spiked in Nepal's Bardia National Park?