On 1 February 2021, Myanmar’s armed forces launched a coup d’état. The country’s civilian leader Aung San Suu Kyi was arrested, along with senior members of her party, the National League for Democracy (NLD), which had won elections by a landslide in November 2020.

About 400 elected members of parliament were placed under house arrest and a state of emergency was declared, with General Min Aung Hlaing, Myanmar’s commander-in-chief, alleging widespread electoral fraud and stating he would remain in power until new elections took place.

A form of military government where the state and military are the same entity, and government positions are occupied by military leaders

Overnight, Myanmar went from a being stratocracy to a military dictatorship. It has been subjected to military rule before, from 1962 to 2011, and holds the record for the longest ongoing civil war, waged against ethnic groups in areas where the most natural resources are found.

Since the coup, a Civil Disobedience Movement (CDM) has grown throughout the country. Tens of thousands of people have taken to the streets to resist the military, including many communities from rural areas.

The CDM has attracted support from all professional sectors, led by healthcare workers, teachers, railway workers, lawyers and bank tellers. Civil servants from a multitude of government departments went on strike, including the Ministry of Natural Resources, Environment and Conservation (MONREC), the Forestry Department, and Myanmar Timber Enterprise (MTE).

The response from the regime was, and continues to be, brutal. At the time of writing, 865 people have been killed, including young children; 6,078 people have been arrested; 4,911 are still detained; and warrants have been issued for 1,937 people.

The impact of the CDM has resulted in the slowing down of international trade; the banking system being unable to function, which creates problems obtaining cash; and severe disruption to other sectors, bringing the country into crisis. Food is now in short supply and access to daily cash limited. Nevertheless, the CDM continues.

Myanmar’s rich forests are among its most valuable natural resources, but have been plundered by logging that helped fund the former military regime.

Large, globally significant tracts of forest exist in Tanintharyi region in the south of Myanmar, and in Kachin and Shan states and the Sagiang division in the north. Approximately 50% of the country is covered in natural forest, with 10% of this primary forest, making Myanmar a biodiversity hotspot.

What is primary forest?

Primary forest is “mature natural humid tropical forest cover that has not been completely cleared and regrown in recent history” (as defined by Turubanova et al). Primary forests are among the most biodiverse forests, and provide a multitude of ecosystem services. Monitoring of primary forests is crucial in national land use planning and carbon accounting.

More than 17 million people, including ethnic communities and indigenous people, rely on forests and surrounding areas for their livelihoods and welfare.

Myanmar has some of the most valuable timber on Earth, including teak, Burmese rosewood and padauk – a natural resource that is both a blessing and a curse. It is because of their commercial value that Myanmar’s forests are being destroyed at a phenomenal rate. Between 2001 and 2020, 4 million hectares of tree cover was lost – an area roughly equivalent to the size of Switzerland.

The impact on ethnic and indigenous communities includes having to live through conflict for more than 70 years, with no recognition of their rights, years of forced displacement and many investors eyeing up valuable land. When the NLD won the election in 2015, a new space was created: access to communities, civil society and Myanmar NGOs became possible. Elected MPs, parliamentary committees and ministries were consulted and there was an air of hope, of the real possibility of finding ways forward. It was a time of optimism – but five years on, that formal space is closed.

Responses to the coup from the international community have varied. China, which shares a land border with Myanmar, has now assured the military dictatorship of its full support. India, another neighbour, has called for the political situation in Myanmar to return to normality and is staying quiet.

Both countries are consumers of illegally sourced timber and other natural resources from Myanmar, and both are profiting from the conflict along their shared borders. Since the coup, Myanmar’s valuable stockpiles of teak and other hardwoods have been placed on the market. It is estimated that over 200,000 tonnes of seized timber is being auctioned for export. 9,900 tonnes of hardwoods were seized by the military in 2020 alone.

In addition, there has been an influx into India of people fleeing conflict and Myanmar’s armed forces (the Tatmadaw). These include policemen who defected after refusing to shoot unarmed civilians. The response from New Delhi was to close the border with Myanmar and attempt to repatriate defectors. On 27 March, airstrikes targeting villages in the heart of the Salween Peace Park and other areas in Karen state resulted in deaths and serious injuries, with thousands of people from ethnic Karen forest-dependent communities forced to flee.

The Salween Peace Park in southeast Myanmar is home to indigenous Karen communities. The park was declared in 2018 by residents of local villages and activists as a community and indigenous-led protected area. It is one of the richest forest ecosystems in the Southeast Asia, with an abundance of endangered species including gibbons, leopards and tigers, which are protected through a network of wildlife sanctuaries, reserved forests and community forests led by the Karen.

Meanwhile the US, Canada, the UK and EU have issued economic sanctions against the Myanmar regime’s holdings, with both Canada and the US targeting Myanmar Timber Enterprise. The US has also targeted MONREC minister Khin Maung Yi, among others.

Revenue from sales of teak and precious hardwoods generates badly needed hard currency for the regime. Sanctions close off that revenue. Information published prior to the coup through the Myanmar Extractive Industries Transparency Initiative (MEITI) estimated that profits of USD 1.6 billion came from forest sources between 2013 and 2017. 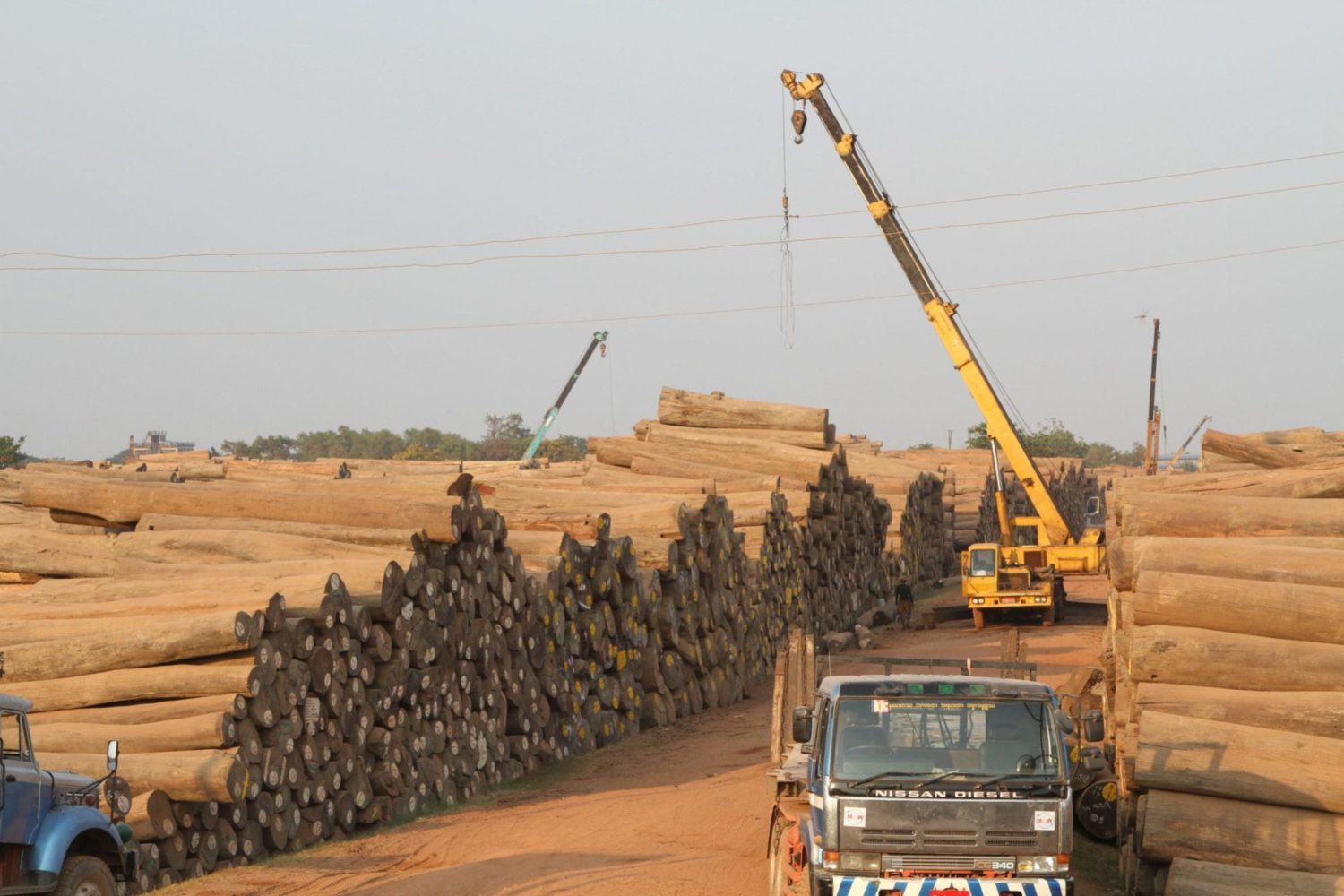 Information also shows that over the same period 2013-2017, China and India declared imports worth USD 3 billion more than Myanmar reported as exports. Monitoring the trade since 1 February, the Environmental Investigation Agency has found that shipments continue onto the international market, including the EU and US, regardless of laws in place.

In the case of the US, we are able to target the flow of money in US dollars between banks in the US and Myanmar, thanks to the systems in place under the current sanctions. This is not the case in the EU: until it targets the MTE, it is up to the competent authorities of member states to enforce the EU Timber Regulation, in place to support the reduction of illegal logging and the use of illegally sourced timber and wood products for entering the European market. Inconsistent enforcement from different member states shows that this is not enough.

Shipments of precious hardwoods continue onto the international market, including the EU and US, regardless of laws in place

As the people of Myanmar resist the military regime and call for support by any non-violent means, the international community must do more. Measures to target the flow of funds that enable the regime to continue its reign of terror while plundering Myanmar’s forests must be established and strengthened.

Note: After the initial publication of this article on 21 June 2021, the Council of the European Union announced new sanctions against the military regime in Myanmar, targeting the State-run Myanmar Timber Enterprise, Khin Maung Yi (the country’s environment minister) and the Forest Products Joint Venture Corporation, meaning there is now no legal source for timber, including teak, to be imported from Myanmar into the EU. The UK Government also announced sanctions against the Myanmar Timber Enterprise.