Dhodial in Pakistan’s Khyber Pakhtunkhwa (KP) province has become the centre of international attention for housing Asia’s largest pheasantry, established four decades ago next to the Karakoram Highway that connects Pakistan with China.

Named after the small town in the province’s Mansehra district, it sprawls across 12.5 acres and is home to around 4,000 birds, representing 38 of the 50 pheasant species in the world. Six are indigenous species, found largely in the Himalayas.

The pheasantry functions as a multi-purpose centre for breeding, education, research and recreation. With a focus on ex-situ conservation of endangered pheasants, it promotes the concept of aviculture among people through the display of beautiful birds.

“The pheasantry was established with the idea of educating and involving the general public in the conservation process,” said Mumtaz Malik, former chief conservator at the wildlife department and founder of the Dhodial pheasantry.

“This was done by offering the incentive of obtaining a pair of birds on nominal rates to keep at home for breeding, or even for the sale of grown up chicks. We wanted to improve the wild bird population by attracting people.”

Among its conservation efforts, perhaps the Dhodial pheasantry’s greatest achievement is its successful reintroduction of the cheer pheasant which had disappeared from Pakistan.

According to a study, the cheer pheasant (Catreus wallichii) is distributed throughout the southern foothills of the western Himalayas, and favours the open forest and shrubland occurring in northern Pakistan, India and central Nepal.

The population of cheer, which is listed on the IUCN red list as “vulnerable”, witnessed a significant decline due to hunting and egg collection, conversion of grasslands to agricultural land, burning and livestock grazing. All of these resulted in habitat degradation, loss and isolation of the bird.

In 1980, Islamabad’s Capital Development Authority (CDA) took notice of the threat to the bird and hatched a ‘reintroduction plan’ with help from the World Pheasants Association (WPA). The WPA sent 90 eggs to Pakistan, which yielded a stock of chicks, Malik recounted.

“Initially, the mortality rate among cheer chicks and grown-up birds was high due to a lack of diagnostic skills among the staff,” Malik said. “However, with consistent efforts, a breeding flock was finally raised in 1997.”

In early 2000, a plan was chalked out to give cheer pheasants’ eggs to farmers living in its natural habitats so they could release the mature birds into the wild. These farmers, said Malik, were lured into this effort with the incentive of a monthly stipend of PKR 500 (USD 3).

Unfortunately, the plan was aborted due to the devastating earthquake in 2005 which caused massive destruction and dislocated residents in the northern areas. Still, there was some good news. A few cheer pheasants released from the pheasantry into a dense forest around a few years ago grew into a flock of around 20 pairs.

“In a recent development, we have explored a viable population of cheer pheasants in their natural habitat at a location which cannot be disclosed,” said Taimoor Ali Shah, the head of the Dhodial pheasantry who is also the divisional wildlife officer in Mansehra district.

Shah’s secrecy about the location stemmed from fear of poachers. Pheasants are beautiful birds with a high market price — an instant attraction for poachers who try to catch these prized animals and sell them.

Even in the prevailing Covid-19 lockdown, a spike in wildlife trade has been reported in Khyber-Pakhtunkhwa province. Due to the economic slump, locals are resorting to wildlife trade as a means of income. Wildlife department officials said a number of seizures were made of illegally caught birds and added that fines were imposed on hunters and poachers.

Rab Nawaz, a senior programme director at WWF-Pakistan Dhodial pheasantry who has been engaged in conservation efforts for the last three decades, is passionate about protecting rare pheasants. He was working with the WPA when the pheasantry was established and lauded its efforts to save the cheer pheasant.

“[The pheasantry] has set a good example of saving biodiversity through conservation, propagation and public awareness. For the last 30 years, it has contributed to improving the population of the rare wild pheasants which were on the verge of extinction,” Nawaz told thethirdpole.net.

Officials at the pheasantry have worked hard to make it a centre for learning more about birds. “For this reason, the rates of pheasants being sold by the Dhodial pheasantry are very affordable as compared with prices in the open market,” Taimoor Shah said. Pheasants can be sold to be reared for breeding purposes, or private zoos or pets. Some are sold for meat, and others can be sold for hunting events that are allowed with specific permits from the government for specific species. 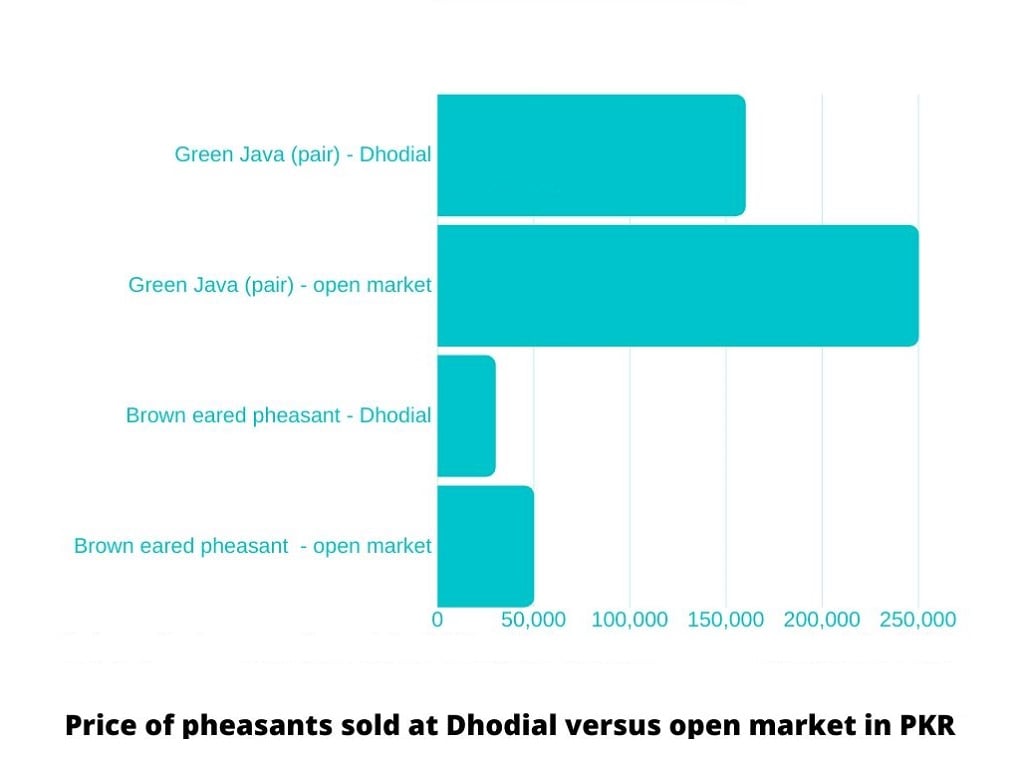 The demand for these birds is gradually increasing as the habit of keeping birds in homes grows — a practice the founders of the pheasantry hope to encourage. Staff members teach buyers how to care for the birds.

Annually, the pheasantry generates around PKR 2.5 million through the sale of birds, eggs and entry fees for visitors, making it a self-sustaining enterprise which bears the expenditure of feeding birds.

Hassan Abdullah, a bird farm owner in Abbottabad district, is one of the hundreds of beneficiaries of the pheasantry’s awareness programme. Abdullah first visited the pheasantry for recreation but slowly grew to love birds and is now involved in pet farming.

“I used to visit the Dhodial pheasantry as a child with my parents and later developed the habit of keeping birds at home,” Abdullah told thethirdpole.net.

He now owns a big farm, the Hazara Pheasantry, where the number of golden pheasants alone has reached 600. Still, he said, he is unable to meet the demands of customers. There are more than one dozen such bird farms in the Hazara division of Khyber Pakhtunkhwa, many of them inspired by the birds their owners saw in Dhodial.

“We also receive orders from Afghanistan and, if permitted by the government, can export pheasants to different countries in Asia,” Abdullah said.

The international trade of wild animals is governed by CITES (the Convention on International Trade in Endangered Species of Wild Fauna and Flora) to ensure trade does not threaten their survival. Pakistan’s current laws allow the export of a few species, including the golden pheasant and ring neck, but obtaining permission from different departments is a cumbersome process. The export of indigenous species is not allowed.

The pheasantry also served as an experimental facility for veterinary science students who conduct research for the protection and preservation of rare wild birds.

According to Allah Buksh, a veterinarian based in Pakistan capital Islamabad, the Dhodial pheasantry helped him in his university days.

“My research at the Dhodial pheasantry about anaesthesia doses for the peafowl was the first ever in the country. It helped establish standards of doses for tranquilising an ailing peacock,” Allah Buksh told thethirdpole.net.

Ameer Balaaj Kiyani, a student of Zoology from Abbottabad who is presently doing research on the effect of indo-parasites on the haematological parameters of ring net and wood green pheasant, said the pheasantry was a great resource for him.

“[Our] research findings supported the conservation efforts by containing mortality rates which were high at the initial stage,” Kiyani said, adding that his research will help in the preparation of an information table for the pheasantry through which it will observe symptoms in birds who fall ill.

While the tale of the Dhodial pheasantry is an uplifting one, it is not without controversy. In 2005, the pheasantry came under threat as the expansion of the nearby Hazara University was planned in the same spot. Then Governor Lt Gen (retired) Iftikhar Hussain Shah ordered the relocation of the pheasantry to the Jabba Sheep farm in the same district to make way for this expansion.

Realising the threat, Abid Zarif Khan of the Peshawar-based NGO Zarif Khan Foundation launched a campaign to stop this relocation and disruption by approaching the press and ministers from the provincial government.

Due to Zarif’s efforts and the prominent press coverage of the issue, a Pakistani Canadian filmmaker Azfar Rizvi made a 40 minute documentary on the issue titled `The Inevitable Flight’. The documentary substantially helped to mould the opinion of civil servants and politicians in favour of the pheasantry, and the relocation plan was ultimately dropped.

Mohibullah, who works with the Islamabad Wildlife Management Board (IWMB), said the contribution of the Dhodial pheasantry in the promotion of bird farming and veterinary science is “remarkable”.

“It has helped a large number of people who have now become successful businessmen and veterinarians. It has really set a model for the successful conservation of rare wild birds through the involvement of the general public by promoting aviculture,” he said.