“The fear of my impending financial losses is hanging over me like a sword,” said Ameenullah. Ameenullah, who owns a trout farm in Swat in northern Pakistan, said he is losing sleep worrying that his entire stock of fish will soon go to waste.

Ameenullah’s farm in the scenic valley of Swat in Khyber Pakhtunkhwa has 15,000 kilogrammes of trout. Ordinarily, this quantity of fish would sell for about PKR 15 million (USD 90,000). However, the sector, which relies heavily on demand from tourism, is suffering from restrictions imposed in response to the coronavirus pandemic.

On March 24, the Pakistani government announced a country-wide lockdown, banning travel for tourism in an attempt to contain the spread of Covid-19.

“My fish are still lying in ponds because of zero market demand due to closure of hotels and restaurants,” Ameenullah told The Third Pole. As well as losing their source of income, the owners of fish farms are having to spend more money feeding mature fish.

Ameenullah estimated that his additional monthly costs come to PKR 750,000 (USD 4,450) from feeding the fish and paying for five labourers and a watchman. He added that his lack of income means he has not been able to pay for a recent delivery of feed.

Back in April, Ameenullah said, the fish were fully grown and ready to be sold. The farms run their businesses so that trout are available between April and August – at the height of the tourist season.

The tourism ministry of Khyber Pakhtunkhwa estimates that around two million people visited the northern province’s mountainous districts in 2019. Swat alone, which is in the division of Malakand in Khyber Pakhtunkhwa, attracted about one million tourists.

In the adjacent region of Gilgit-Baltistan, the tourism department reported that about 1.72 million people visited in 2017.

There are around 180 trout fish farms in Gilgit-Baltistan and 200 in Khyber Pakhtunkhwa. Swat accounts for more than 150 of these.

View of a private fish farm full of trout in the scenic Swat valley, Pakistan. Due to crystal-clear, cold water of the river, Swat has become a hub of trout fish farming [image courtesy: Muhammad Usman]

Usman Ali is general secretary of the Swat Trout Fish Farming Association and runs his own farm. Ali told The Third Pole that each fish farm contains stock ranging between 10,000 kg and 15,000 kg. He said that up to 300 tonnes of food in Swat alone is at risk of going to waste. The estimated worth of 300 tonnes of trout is around PKR 300 million (USD 1.8 million), Ali said.

He added that about 1,500 people in Swat depend directly on trout farms for employment, with thousands of others affected via their jobs in hotels, eateries and shops.

See: Opinion – We can prevent a hunger pandemic in the mountains

In the remote district of Chitral in Khyber Pakhtunkhwa, Hafiz-ul-Asad has similar worries about the fate of his 2,000 kg of stock.

There are seven trout farms in Chitral, including one owned by the government. Asad said that dealers are unsure about what to do about the situation arising from the pandemic.

In response to the slump in demand, most farmers have reduced the price of their fish from the official rate of PKR 1,000 (USD 6.06) per trout to PKR 800 (USD 4.84), said Qari Mujahid, president of the Ghizer Trout Fish Farm Association in Gilgit-Baltistan. 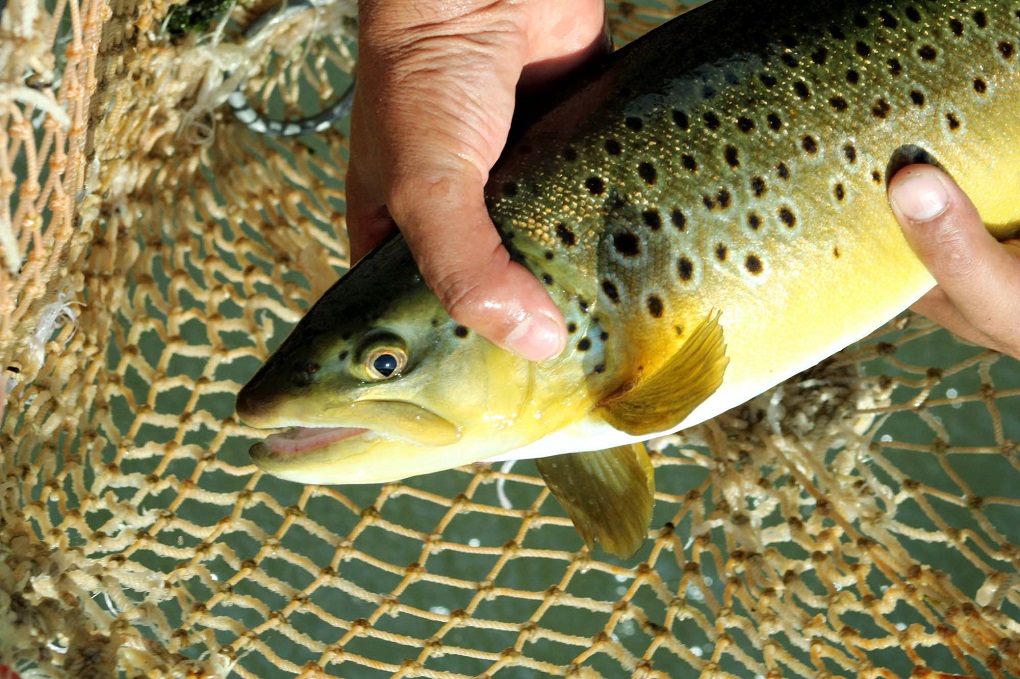 Ghulam Mohiuddin, from Gilgit-Baltistan’s fisheries department, suggested that the reduction in the price of the fish was benefitting local people, and leading to increased consumption of trout. However,  private fish farm owners told The Third Pole that locals cannot use the whole stock.

“For us [the lockdown is] jamming the whole system because due to lack of sale we cannot continue doing business and meet daily expenses,” Mujahid said.

The cash flow problems mean that dealers are supplying fish food to farmers on a loan basis, Ali said. But the dealers are also charging more for the feed.

To make matters worse, as the fish age and gain weight they become more vulnerable to disease. Overcrowding in the pools also contributes to problems.

Ali said the farmers do not know what will happen to the stock if the situation continues. He said farmers will not be able to continue to feed their fish by taking out loans. Unless demand for trout picks up soon, he said the farmers may lose hope of being able to sell their fish and release them into the Swat river. 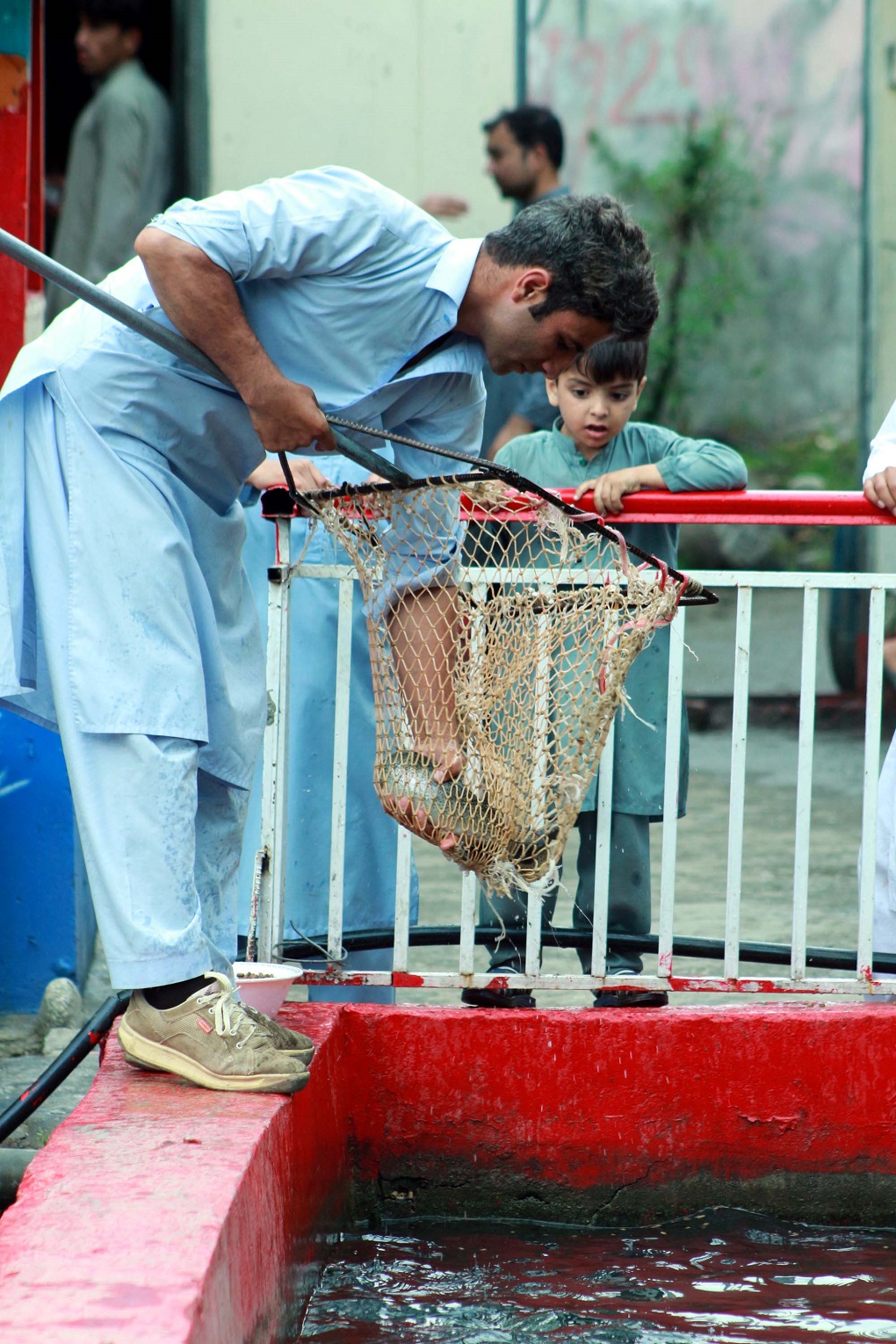 The owner of a fish farm catches a fish to show how the stock is fully grown and getting overweight [image courtesy: Muhammad Usman]

A worker throwing feed in a pond full of grown trout fish. Due to zero market demand in wake of corona-induced lockdown, fish are still in farms, and may perish [image courtesy: Muhammad Usman]

While farmers have not yet decided to directly cull stock, reducing the amount of feed is effectively a cull, Ali stressed.

He called for cold storage facilities to be set up in Swat and Gilgit-Baltistan. This would allow farm owners to freeze their stock and sell them at a later date, when demand recovered. Farms currently have no such storage capacity.

Not native to the country, brown and rainbow trout were introduced to Pakistan by the British in the early 1900s. “Due to crystal-clear cold water of the River Swat, the upper terrain of the district, especially Madyan, Kalam, Utror, Gabral, Matiltan and Usush, became a hub for trout fish farming and breeding after government realised its potential and took initiatives which helped in commercial production in 1984,” said Zaigham Hassan, assistant professor in the University of Peshawar’s zoology department.

See: The troubled trout of Kashmir

Being a carnivorous fish, trout is expensive to feed, especially when it is mature.

It also requires specific conditions to survive, thriving only in the temperate and cool parts of the country. Without technology to keep the product cold and fresh, transporting it to other parts of Pakistan is not an option.

Mohiuddin, of Gilgit-Baltistan’s fisheries department, said the regional government was aware of trout farmers’ hardships and had arranged to provide feed free of cost, worth PKR 4.2 million (USD 25,000).

He said the department did not have the resources to provide financial assistance, but added that if the situation continues, he will make proposals to the government. Mohiuddin has also submitted proposals to establish cold storage.

Jaffar Yahya, assistant director of government organisation the Madyan Trout Training Center in Swat, said he had sent some proposals to the government of Khyber Pakhtunkhwa. As well as requesting that the government establish cold storage facilities, which farmers would pay a monthly rent for, his suggestions include providing feed free of cost for a period of time, or at least at subsidised rates. 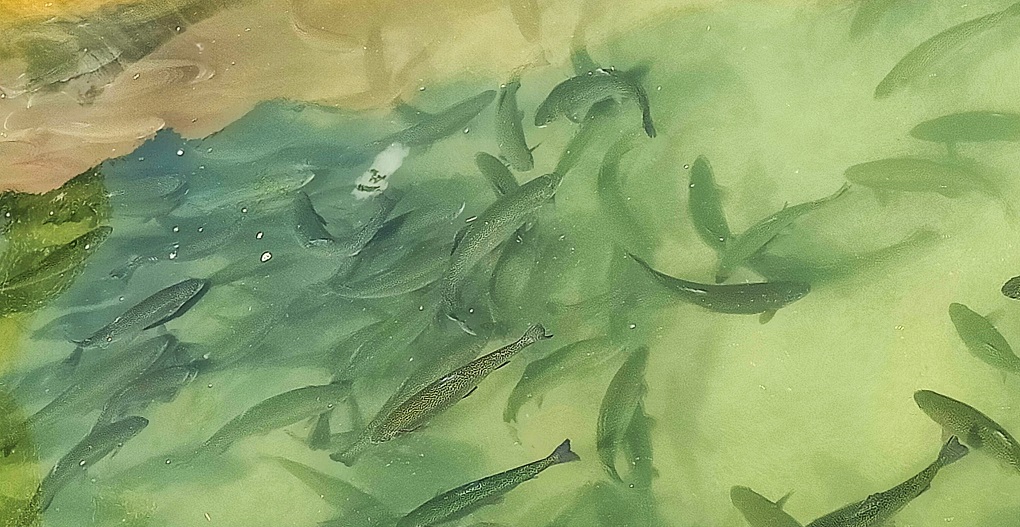 Yahya has also proposed arranging micro loans on very soft terms so that farmers can continue to run farms and feed stock.

He urged both local and international non-governmental organisations to help trout farmers and thereby support thousands of people’s livelihoods.

However, Ali said, the private sector farms now do not have the funds or space to purchase the fry. “If we lose the existing stock, it will also affect the earnings of next year because of our inability to purchase new stock,” he said.

Last year in Gilgit-Baltistan, the fisheries department sold around 1.3 million fry fish; these are now fully grown but the farmers cannot sell them.

It takes 12-14 months to rear a fry into an adult trout, raising questions about if the stock will be ready for the tourist season next year.

Previously, there were plans to grow the sector in Gilgit-Baltistan, with a number of farms under construction and the total projected to rise to 200. This could be a blow to plans to expand a previously profitable enterprise for local people.

Yahya, from the Madyan Trout Training Center, said it is difficult to handle hundreds of tonnes of fully grown fish. He said it seems the only solution is to lift the ban on hotels and restaurants and allow tourists to return while following strict standard operating procedures (SOPs) that prevent the spread of Covid-19.

“The hotel industry in Swat has suffered an enormous loss of PRK 3.5 billion (USD 20.2 million) during the past three months due to lockdown,” said Zahid Khan, president of the All Swat Hotels Association.

He said that the hotel industry would follow all SOPs set by the government for doing business if the ban is lifted.

On July 15, Prime Minister Imran Khan hinted at the slow reopening of tourism in the country when he launched the Diamer Basha dam project in Gilgit-Baltistan.

“Tourism is slowing resuming. It will not be the same as it was before the pandemic hit, but we can start opening it slowly and start developing SOPs for it,” Khan said.

Along the Koshi, flooded in Nepal, ignored by India

Release of Kaavan the elephant reignites zoo debate in Pakistan

More people will die of extreme heat than of infectious diseases