As the pandemic continues to threaten lives and livelihoods across the globe, developing countries are braced for the worst of its economic consequences. The health crisis has jolted economies and triggered sovereign debt crises, which means more developing economies are now in debt distress. The phrase ‘debt pandemic’ has emerged to illustrate how developing countries will struggle to repay foreign loans.

The United Nations Development Programme told The Third Pole that it estimates a minimum USD 598 billion of external public debt service payments (the cost of borrowing money from foreign lenders) is at risk across 72 countries from 2021-2025 – more than the GDP of Sweden. USD 311 billion is owed to private creditors.

When it comes to countries crushed by sovereign debt, Pakistan is no exception. Its sovereign debt stands at 38 trillion Pakistani rupees (about USD 240 billion) – a towering figure for a country where per capita annual income is USD 1,542.5.

Pakistan’s capacity to recover from the pandemic is further squeezed by debt servicing (repayment of the original loan and interest), which has eaten up more than a third of the country’s total revenue during the past five years.

This is one in a series of articles exploring some of the ways communities and governments in Asia are responding to the biodiversity crisis. You can view the whole series here

But Pakistan hopes to address this predicament with a solution that has its roots in the climate crisis: getting debt relief by delivering on steps to protect sensitive ecosystems and biodiversity.

It aims to do this through a debt-for-nature swap and the first-of-its-kind nature performance bond (NPB).

“We are working on a debt swap as well as the nature performance bond,” Malik Amin Aslam, the adviser to Pakistan’s prime minister on climate change, told The Third Pole.

A nature-based solution for debt?

Designed by the Finance for Biodiversity Initiative (F4B), which strives to factor biodiversity into financial decision-making, Pakistan’s nature performance bond would be tied to meeting nature-based targets.

Under the scheme, a creditor country may write off a portion of the newly issued debt, or reduce repayment interest rates, if biodiversity and nature restoration targets are achieved. 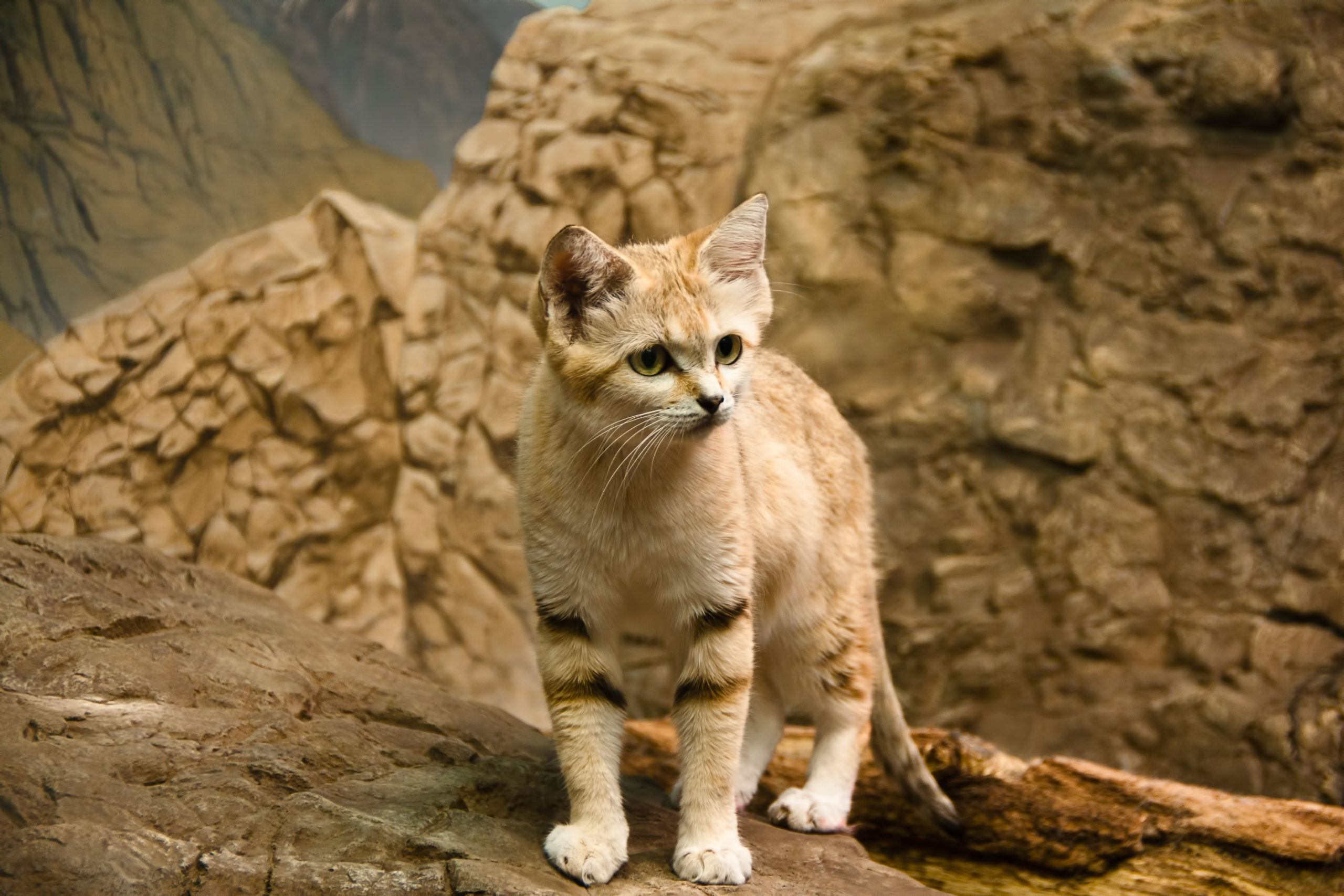 The sand cat lives in arid areas including the deserts of Pakistan. Under the ‘nature performance bond’, Pakistan could receive finance in return for protecting biodiversity. (Image: Richard Higgins / Alamy)

“We are targeting USD 1 billion in nature-based bonds [under the NPB],” Aslam said, referring to the “overwhelming” response to Pakistan’s first-ever green bonds, which sought USD 500 million for clean-energy projects in May.

The United Nations Development Programme (UNDP) is providing technical assistance to Pakistan in designing the NPB bond, on which Canada, Germany and the UK have said they will  engage in a dialogue.

“We welcome and endorse the government of Pakistan’s ongoing efforts to create the world’s first NPB,” a spokesperson for UNDP Pakistan said.

They added: “NBPs are one way to provide Pakistan with accelerated access to finance for development – [which is] also high on the agenda of the COP26, co-chaired by the UK and Italy.”

Pakistan, the world’s fifth-largest country with a population of 220 million, is responsible for less than 1% of global carbon emissions but is among the top 10 most climate-vulnerable nations. This reality recently prompted Prime Minister Imran Khan to ask rich nations to give finance to countries vulnerable to climate change.

“We aim and hope to announce a deal [for the first NPB] at the World Bank-IMF annual meeting in October [this year],” Mark Halle, an ambassador for the Finance for Biodiversity Initiative, told The Third Pole from Switzerland.

According to Halle, Italy and China will soon be coming to the table, and Pakistan’s bonds will be a reality at COP26.

Pakistan’s list of actions and targets includes its efforts in the 10 Billion Tree Tsunami project, the restoration of 15 national parks and the development of mangroves, Halle said.

Halle said performance would be monitored through satellite imagery, periodic visits by third-party evaluators and meetings with local communities to check that programmes are implemented “as per agreement” and local people get employment opportunities.

Challenges to carbon sequestration through afforestation

A number of issues undermine the concept of carbon offsetting via planting trees:
• Lack of a clear metric to measure how much carbon dioxide a hectare of forest actually absorbs
• The largest trees absorb the most carbon, so trees planted now will take a long time to make a significant impact
• Composition of the forests makes a big difference. Monoculture plantations are poor for biodiversity and absorb less carbon
• Plantations in inappropriate places may degrade existing ecosystems like desert, savanna and grasslands.
• Land acquisition: people are often displaced to make space for plantations
• Poorly planned and hastily executed projects may increase greenhouse gas releases and harm people and biodiversity

Upon achieving the targets, Pakistan could spend the remaining money where it is needed in line with the negotiations with creditors. “I guess the hope is they do not waste it or spend it on military activity,” Halle said.

Pakistan is ranked 124th out of 180 countries in Transparency International’s Corruption Perceptions Index. It also spends heavily on defence, despite limited resources. It has allocated Rs 1.37 trillion for defence services in the 2021-22 fiscal year, a 6.2% increase.

The Pakistani government says its flagship 10 Billion Tree Tsunami project has already created 85,000 green jobs, and that another 200,000 jobs will be created in the coming years.

The proposed nature performance bond for Pakistan is hailed by the government, especially given the country’s heavy reliance on foreign debts. Pakistan’s external debt and liabilities stood at a staggering USD 116 billion as of 31 March, 2021. It owes over USD 10 billion to the Paris Club of rich creditor countries.

“These talks are taking place for nothing but money,” said Ali Tauqeer Sheikh, an expert in climate risk management.

Sheikh said that the government was “trumpeting more about the debt relief than the environmental benefits”.

“It [the NPB] is about money and not about biodiversity, climate change, emissions or carbon sequestration,” Sheikh said.

The UNDP Pakistan spokesperson said: “The NPB has the potential for addressing the debt problem at scale and increasing resilience in society and economy to a variety of shocks such as future pandemics and climate change impact.”

Another aspect of Pakistan’s nature performance bond, according to Sheikh, is the opportunity for developed countries to deflect global pressure and boost their image on climate change and biodiversity.

“They [developed countries] want to look good that they are investing on climate change. It also helps them pacify domestic concerns and fulfill commitments of spending on climate,” Sheikh said.

For example, the Pakistani authorities present tree planting, under the 10 Billion Tree Tsunami, as a solution to degraded ecosystems. “This is a very crude understanding of the ecosystem,” Sheikh said.

On the positive side, he said “they [ the government] have at least mainstreamed the issue”.

Debt swaps have been around for decades. Between 1985 and 2015, over 30 countries had such agreements, worth more than a combined USD 2.6 billion. In 2009, Pakistan signed a debt-swap agreement with Italy, pledging agriculture, health, education and environmental projects.

Since the Covid-19 pandemic, there has been a new push for green financing instruments, with Imran Khan calling for rich countries to do more.

Long way to go to meet climate and biodiversity targets

Pakistan has said it is doing its best to fight global warming, with plans to shift to 60% clean energy and 30% electric vehicles by 2030.

The targets seem ambitious given Pakistan’s existing energy mix, which is highly dependent on fossil fuels. Coal and natural gas make up 59.42% of electricity generated, up from 58.43% during the 2020 fiscal year.

Sheikh pointed out that Pakistan is one of the biggest subsidisers of fossil fuel for power generation and the “2030 targets were not supported by concrete measurable steps”.

Pakistan is ahead of many when it comes to planning, but execution of the plans remains a challenge

Aslam said his government would achieve the 2030 targets as 10 new dams are likely to come online in the next 10 years and reduce the amount of fossil fuels in the energy mix.

“Pakistan is ahead of many when it comes to planning, but execution of the plans remains a challenge,” Mahmood Akhtar Cheema, country representative for the International Union for Conservation of Nature (IUCN) in Pakistan, told The Third Pole.

He said vegetation covers only 5.2% of Pakistan, and the country has a long way to go to meet its target: it has reportedly planted a billion trees so far out of its promised 10 billion. The country needs funds to tackle the enormous challenges, Cheema said, which the proposed bond can help raise.

Cheema added that the country has previously struggled to ensure the continuity and sustainability of initiatives and projects.

“Prime Minister Khan’s test is not to plant a tree, but to give a formula for carbon sequestration and ensure its sustainability and continuity by negotiating with his possible successors,” Sheikh said.

Asian development banks are most exposed to biodiversity risks

Comment: Onus is on Pakistan to ensure CPEC has environmental mandate