Government efforts to address the flooding of Srinagar city have caused serious damage to the Hokera Wetland in Kashmir, due to persistent failure to abide by the environmental protection measures set out as preconditions to the project. The excavation of channels aimed at draining excess rainwater has dried up a major portion of the 1,375-hectare wetland. Meanwhile, wildlife officials have reported that around 80% of the excavated material is still lying in the wetland.

The Hokera Wetland, known locally as Hokersar, is designated by Ramsar as a wetland of international importance. “Hokersar is important for both resident and migratory waterfowl,” Asad Rahmani, former director of the Bombay Natural History Society, told The Third Pole. “As many as 64 species in and around the wetlands have been reported during bird ringing studies. The lake is particularly important as a wintering area for migratory ducks and geese, and as a breeding area for herons, egrets, and rails.”

Waterfowl censuses conducted in recent years, he said, have yielded counts of around half a million wintering birds in Hokersar. But this year, there has been a massive decline. “My local sources told me that there is a tremendous decrease in the number of birds,” he said. 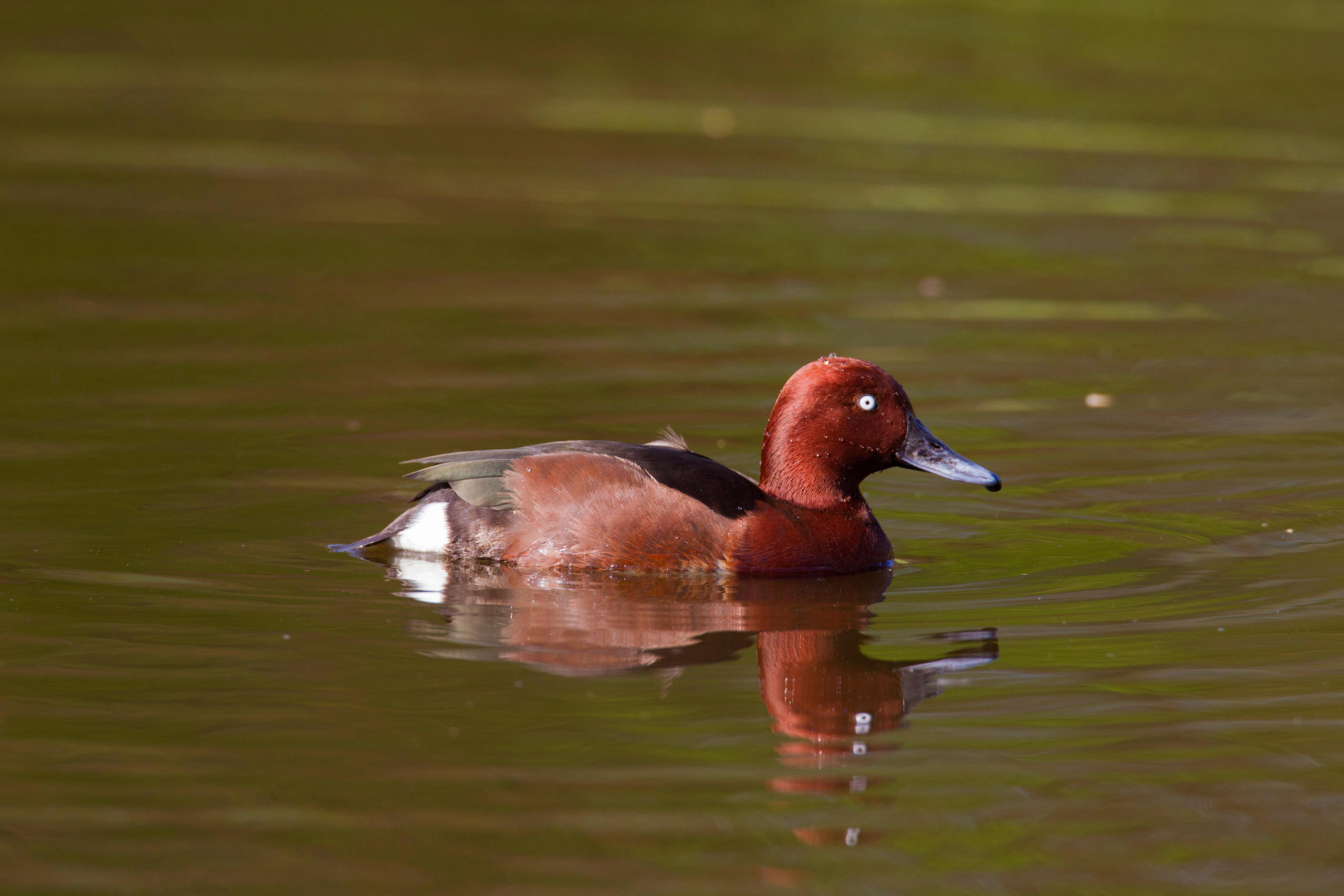 The ferruginous duck, a key species at Hokersar, is classified as Near Threatened by the IUCN [Image: Alamy]

The wetland, located 10 kilometres west of Srinagar’s city centre and fed by the perennial Doodhganga river, supports populations of waterbirds that migrate from breeding grounds across Siberia, Central Asia and China to spend the winter. Key species include the ferruginous duck (Aythya nyroca), assessed as Near Threatened by the International Union for Conservation of Nature.

Two years after the devastating floods which struck Kashmir in September 2014, the Jammu and Kashmir government approved a flood management programme to protect Srinagar, the summer capital of Kashmir.

Phase one of the two-stage plan included, among other flood management measures, the dredging of a flood spill channel through Hokersar wetland to enable excess rainwater to drain away. 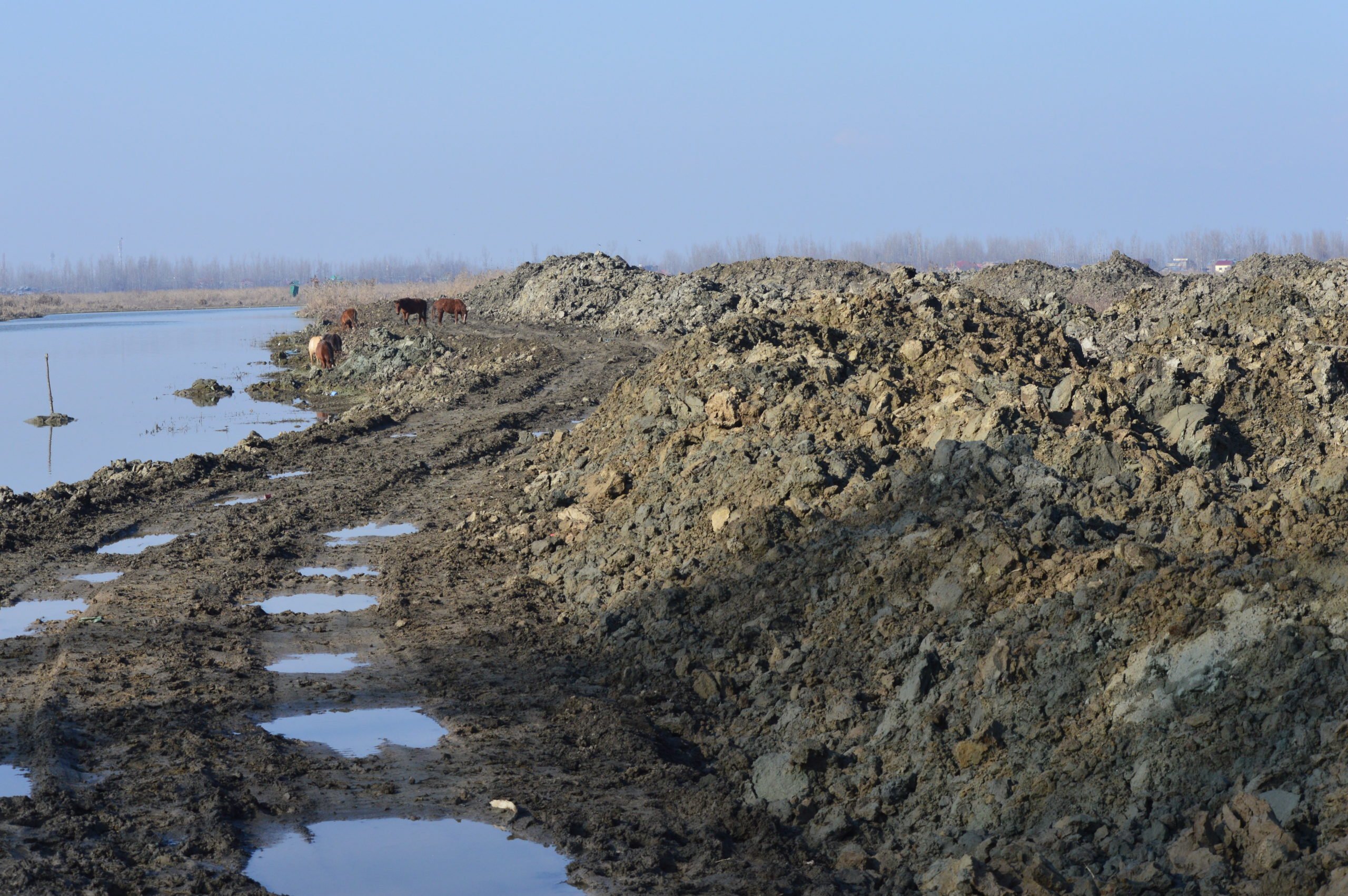 A channel passing through Hokersar wetland which has been dredged, with excavated material left behind [Athar Parvaiz/The Third Pole])

Citing recommendations from India’s National Wildlife Board, a number of conditions were set in the 2016 government order (seen by The Third Pole) for the execution of the work, including requirements to maintain water quality in the wetland by setting up an effluent treatment plant, disposing of excavated material outside the wetland “by mechanical means or otherwise to the extent of full quantity”, and setting up a “sufficient number of sluice gates” to ensure “3-4 feet of water level in the wetland throughout the year”.

These conditions have not been fulfilled by the executing agency, Reach Dredging Ltd, which was awarded the contract by Kashmir’s Irrigation and Flood Control (IFC) department. Between July 7, 2019 and December 14, 2020, 13 letters were sent to the IFC department from the office of the Wildlife Warden of Kashmir, Jammu and Kashmir Department of Wildlife Protection, with requests that these conditions be met. No response was received. 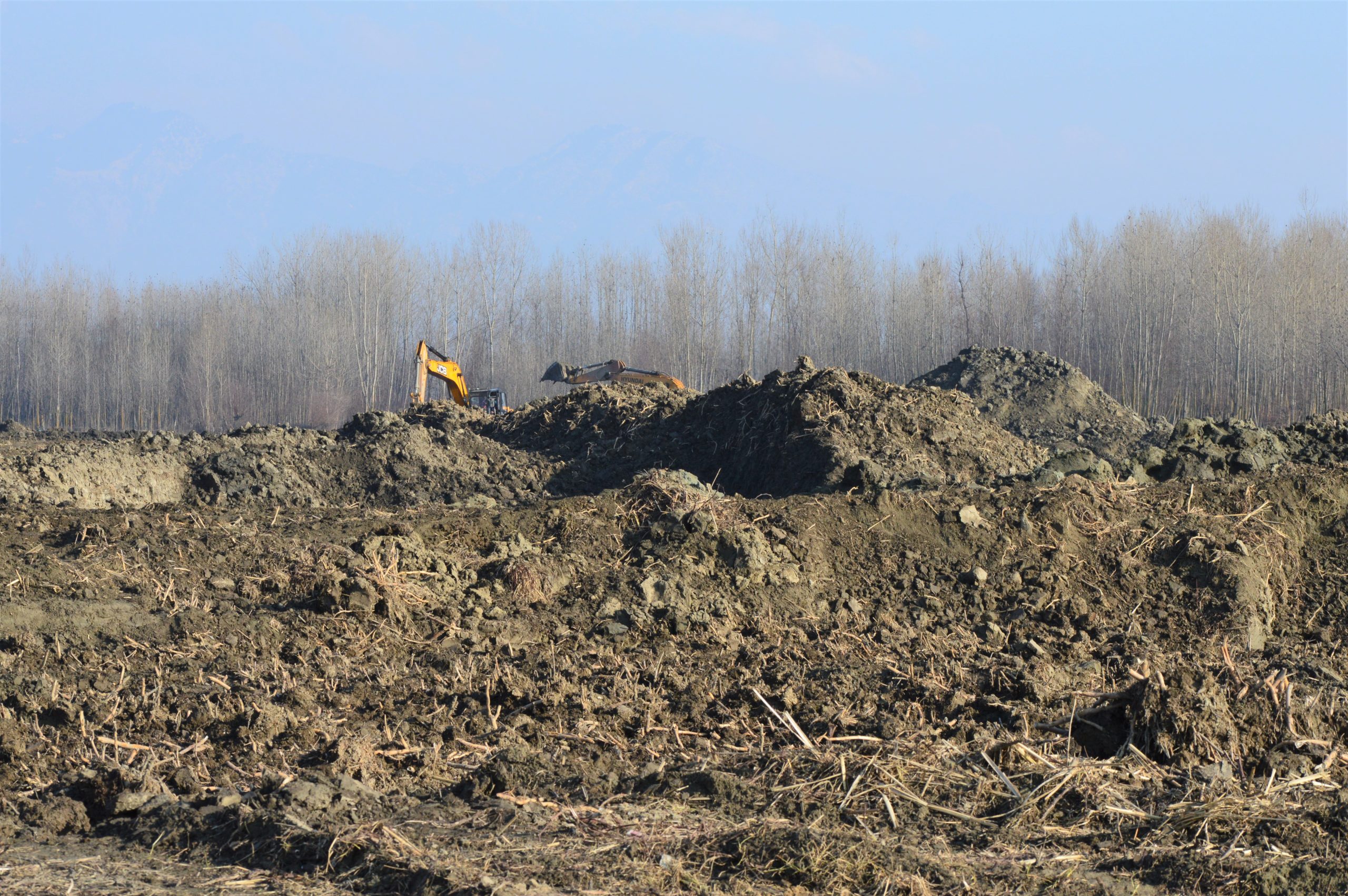 A letter from September 2020 notes that failure to abide by these conditions has “bifurcated the wetland into two parts resulting in … drying up of the area which poses a great threat to the flora and fauna of the habitat.”

A subsequent letter from December 14 states that deepening of the flood spill channel and ancillary feeding streams “has increased the velocity of water in these channels thereby abstracting more waters from and within the Hokersar Wetland Reserve. This has … converted [a] major portion of the wetland into a land mass.” The letter urges the IFC department to “resolve this long pending issue at an earliest [date] so that this wetland of international importance is saved for long.”

A wildlife official told The Third Pole that around 80% of the earth excavated during the channel dredging is still lying in the wetland. Visiting the wetland in early March 2021, this reporter saw that mounds of excavated material were being spread around by bulldozers in the wetland itself.

In a phone call with The Third Pole, Iftikhar Kakroo, chief engineer at the IFC department, claimed that “over 60% of the excavated material has been removed from Hokersar wetland and the entry and exit gates will also be constructed soon”.

Asad Rahmani, who has taken a keen interest in the wildlife of Jammu and Kashmir for many years, told The Third Pole that he has “noted with deep concern in recent weeks that the wetland has dried up by drainage of water and has undergone further damage and defacing as mounds of muck still remain in the wetland.” Rahmani said that he has requested the government of Jammu and Kashmir to “please take necessary measures for saving the wetland”.

When there is no water in the wetland, how can the grass grow? This wetland is of no worth without water

Afroza, a villager who collects fodder from the wetland

In a letter to the lieutenant governor of Jammu and Kashmir, conservation organisation Wetlands International South Asia expressed concern that the dredging of flood channels in Hokersar “fundamentally alters the natural hydrology of the wetland”, leaving it vulnerable to long-term drying and encroachment, despite its protection under the Wetlands (Conservation and Management) Rules 2017 as a Ramsar site. The letter recommends urgent construction of a sluice gate to help maintain water levels, and concludes by urging the government to “take immediate steps to stop further degradation of this precious wetland which is the ecological buffer of Srinagar city and serves as a habitat of millions of resident and migratory birds”.

Local residents expressed their frustration about how the wetland has been “vandalised”. 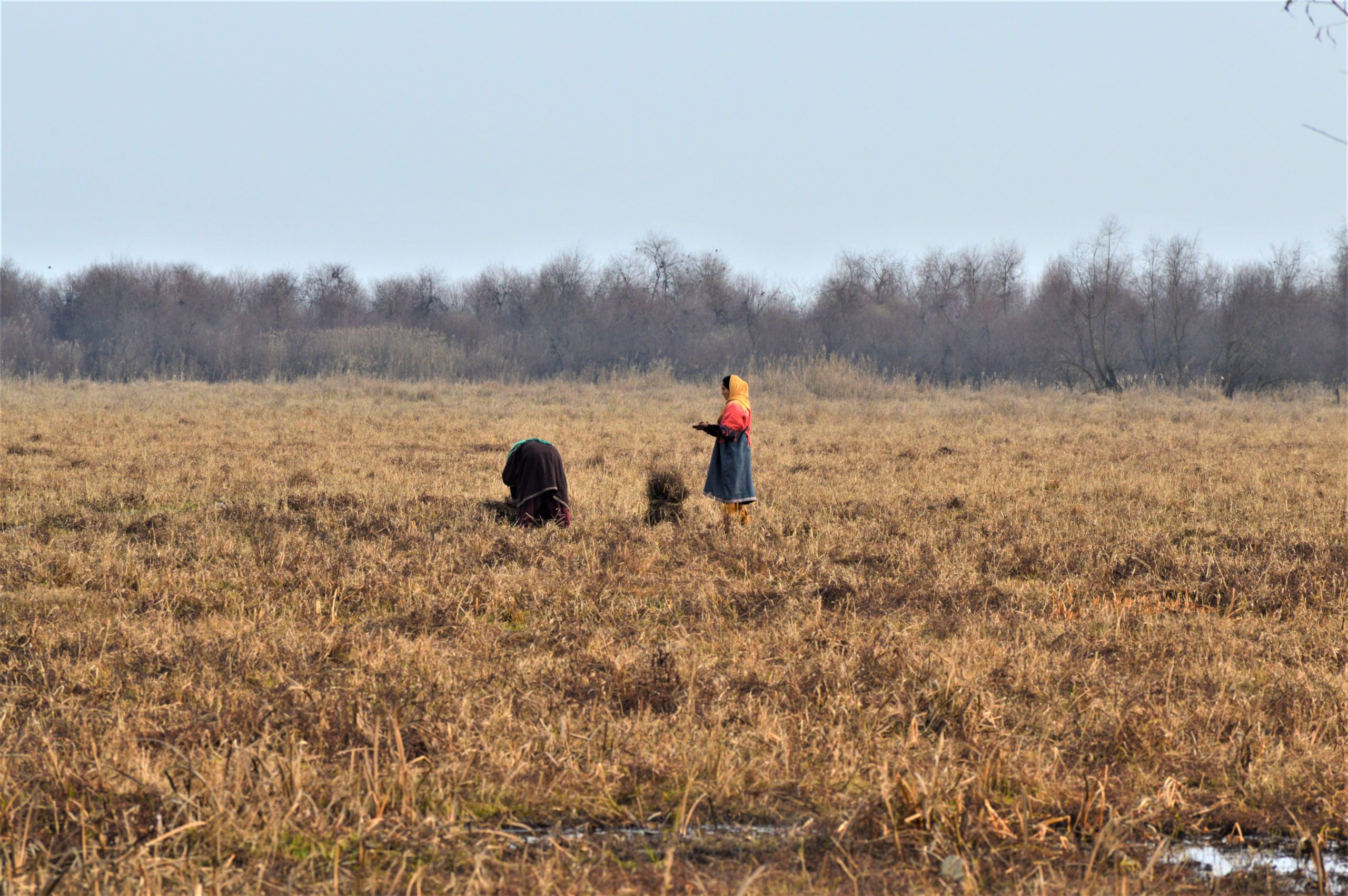 Aarif Habeeb, a local milk seller from Zainakote village adjacent to Hokersar, said that the wetland has been “ruined in the name of flood management”.

“We were able to drive our load carrier [mini-truck] inside the wetland [to collect] fodder for our cows,” said Habeed, referring to the lack of water caused by dredging last year. “I don’t think we will be able to feed our livestock on the wetland considering the damage it has undergone.”

Over a dozen villages depend on Hokersar for fodder to support livestock raising and milk production. “Hokersar is an absolute treasure for the locals in terms of livelihood support besides being a flood-absorption basin and an important habitat for migratory and local birds,” said Shahid Wani, teacher of environmental sciences at Srinagar’s SP College.

Afroza, a villager who was collecting grass from the wetland when she spoke with The Third Pole, said the amount of fodder available in the wetland was “quite low”. “When there is no water in the wetland,” she said, “how can the grass grow? This wetland is of no worth without water.”

Iftikhar Drabu, a civil engineer and consultant from Kashmir, said that digging flood channels is not the solution to flooding in Srinagar or Kashmir. “It will provide marginal relief in case of a minor flood even when … flood management elsewhere in River Jhelum [is] completed,” said Drabu. “For a flood of the intensity of 120,000 cubic feet of water flow per second, which we had in 2014, any management can only work when we are able to create infrastructure in the upper watershed [of the Jhelum] for controlling and delaying the flow of water coming downstream.”

A woman farmer shows the way

A phone for Kashmir’s nomads