Abdul Hamid Bhat, 58, of Shopian district in Kashmir, vividly remembers the days he could easily sight a herd of Markhor in the nearby Hirapora Wildlife Sanctuary. But he has not seen any of the famous mountain goats in the last two decades. Surveys by the Wildlife Trust of India (WTI) say the Markhor population in Hirapora has fallen from 70 in 2004 to 30-35 now.

“The construction of the Mughal Road and overgrazing by [the sheep and goat flocks of] nomad Bakarwals are the main reasons for decline of Markhor here,” Bhat says. “Authorities have also laid a power transmission line for which a lot of trees were cut, which also disturbed the habitat of animals including Markhor.”

The Mughal Road connecting Srinagar in Kashmir with Poonch in Jammu – opened in 2009 – passes through the Hirapora sanctuary, posing a threat to wildlife. The opening of the road has also made it easier for nomadic shepherds to bring their flocks to Hirapora on way to their summer pastures, Bhat said.

The population, the threats

WTI surveys show a Markhor population of 180-200 in Kazinag and Uri in northern Kashmir, 30-35 in Hirapora in the south, 20-30 in Bunyar and Shamshabari in the west and 40-50 in Poonch and Rajouri, outside the Kashmir valley. 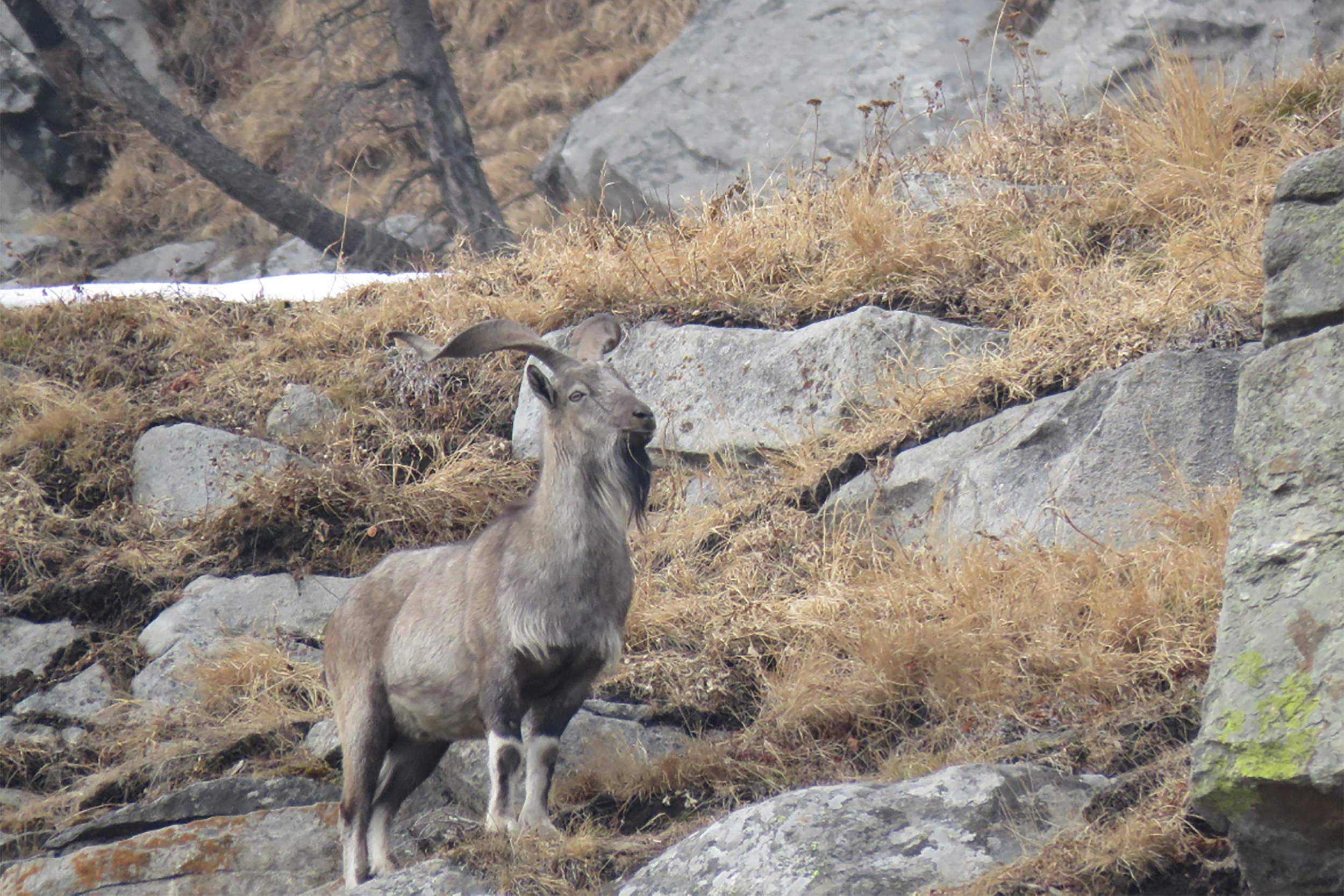 A Markhor in the wild [image courtesy: Wildlife Trust of India]

Riyaz Ahmad, the project head Markhor conservation in WTI, said while Markhor numbers had halved since 2004 in the Hirapora Wildlife Sanctuary, it has remained steady in other parts of Kashmir.

Markhor (Capra falconeri) – the largest wild goat in the world – was in the near-threatened category on the IUCN red list when the most recent assessment for the species was made in 2014. The mountain goat’s habitat ranges over the north-western parts of the Hindu Kush Himalayas, in Uzbekistan, Turkmenistan, Tajikistan, Afghanistan, Pakistan and India.

By conserving Markhor we can conserve its associated biodiversity in Kashmir Himalayas. If we preserve the Markhor which is a flagship species, then we can conserve flora and fauna of our habitat

The Markhor is officially protected under the Jammu and Kashmir Wildlife Protection Act. But it remains highly threatened due to ill-planned development projects, overgrazing by domestic animals, laying of electricity transmission lines, poaching and fragmentation of its habitat due to fencing along the border between India and Pakistan. This fragmentation has led to inbreeding on both sides.

Yash Veer Bhatnagar, senior scientist at the Mysore-based Nature Conservation Foundation (NCF), has done extensive work on the Markhor. He said that livestock pressure is the main threat to the animals, “Historically it was sighted in Banihal, Boniyar, Kazinag, Shamasbari and Kishanganga. But there has been fragmentation over the years in these areas.”

Bhatnagar pointed out that the grazing pressure on Hirapora increased after 1947 when Pakistan and India were partitioned. Talking about the nomadic shepherds, he said, “Before 1947 they would adopt the Muzaffarabad route and then come into Kashmir. After 1947, they use Poonch-Rajouri. So, come through the Hirapora route in South Kashmir where there is intense grazing going on.” 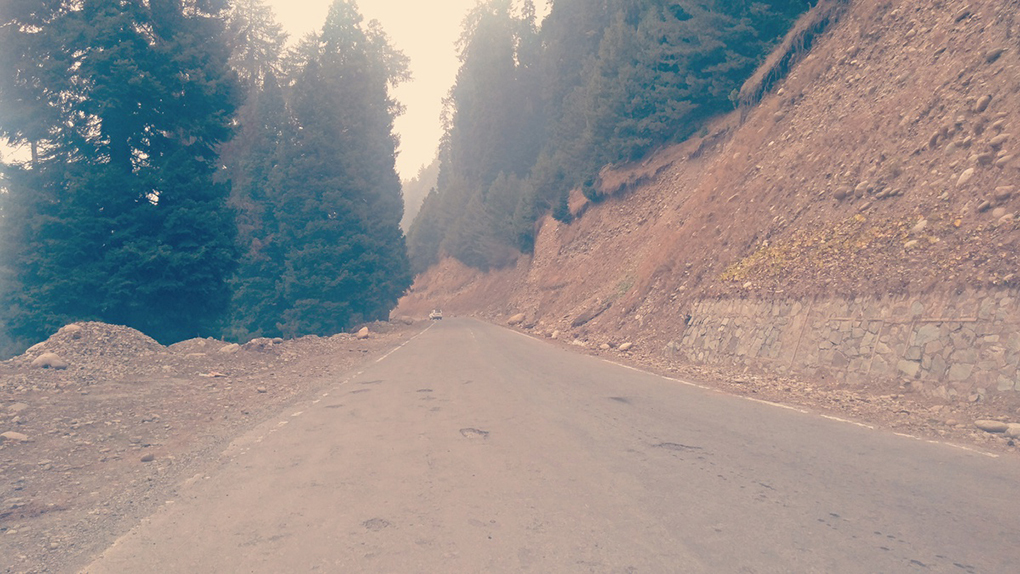 The Mughal Road within the Hirapora Wildlife Sanctuary [image by: Mudassir Kuloo]

Officials do see some encouraging signs. Intisar Suhail, Wildlife Warden of Shopian, said the Mughal Road was built only after the Supreme Court laid down various conditions to protect wildlife. “No doubt it has affected the habitat, but things are getting stabilised now. Some Markhor were recently sighted, which is an encouraging sign.”

The Hirapora sanctuary is at an altitude that ranges 2,557-4,745 metres above the mean sea level. The Markhor move even higher in summers, Suhail said, due to the presence of domestic flocks. The wild goats move down to Hirapora in winters.

The officials survey the Markhor population in the sanctuary every alternate year, Suhail added. The next survey is scheduled in 2021. “In the last few years’ surveys, there has not been much difference [in population].”

Suhail agreed that the big threats to the Markhor in Hirapora was “livestock grazing and associated disturbance, poaching, development activities in its habitat, turbulence along LoC (Line of Control) between India and Pakistan.”

As for poaching, the main reason is the Markhor’s trademark spiralling horn that can grow more than a metre long. The horn is prized as an aphrodisiac in traditional Chinese medicine, though there is no scientific proof of this. The same mistaken belief has decimated wildlife populations all over the world, ranging from the rhinoceros to the pangolin. Trackers of wildlife trafficking say Markhor horns are often smuggled from India and Pakistan to Tibet.

However, Rashid Naqash, Regional Wildlife Warden of Kashmir, asserted that hunting of Markhor has been stopped.

Bhatnagar of NCF said overgrazing was a problem in Pakistan as well, but the authorities had taken some conservation measures there. “They have started trophy hunting. You have to pay USD 100,000 to hunt one Markhor. Out of that 80% goes to community organisations and 20% to the government. This way local hunting has been stopped in Pakistan.”

The Wildlife Trust of India has been talking to local communities and migratory herders in an effort to reduce the pressure on grazing lands and increase awareness about the Markhor.

Praising the efforts of WTI, Akhtar H Malik, a botanist at University of Kashmir, said, “By conserving Markhor we can conserve its associated biodiversity in Kashmir Himalayas. If we preserve the Markhor which is a flagship species, then we can conserve flora and fauna of our habitat.”

“Wildlife Trust of India has taken several measures by making awareness programmes about Markhor, which has shown good results,” Malik added. “With their efforts, the animal has got some focus. They created awareness among people across Kashmir. Poaching is not so open now. People are pressurising the government to take some conservation measure, which was not the case earlier.”

A WTI report says the way to conserve the Markhor in Hirapora is to control livestock grazing. “In the Hirapora Wildlife Sanctuary there seems to be heavy summer grazing by the migrant Gujjars and Bakarwals in Markhor areas. This needs to be urgently controlled so that Markhor populations can recover in the region. To begin with, a good inventory of herders, their livestock holding, areas used and duration of stay is needed from these areas,” the report suggested, although it is unclear whether the implementation would include the cooperation of the migrant communities into conservation or their exclusion.