On January 17, a group of young men out on a winter trek in the Dachigam National Park near Srinagar were stunned to see the carcass of a Hangul with bullet wounds in the Pehlipora area of the forest.

“We were shocked when we saw the dead Hangul. There were clear signs of a bullet injury on its body,” said one of the trekkers, who spoke on the condition of anonymity. “There was no footprint of a wild animal such as a leopard on the snow around that spot. It appeared that the Hangul fled from where it was shot and succumbed after covering some distance.” 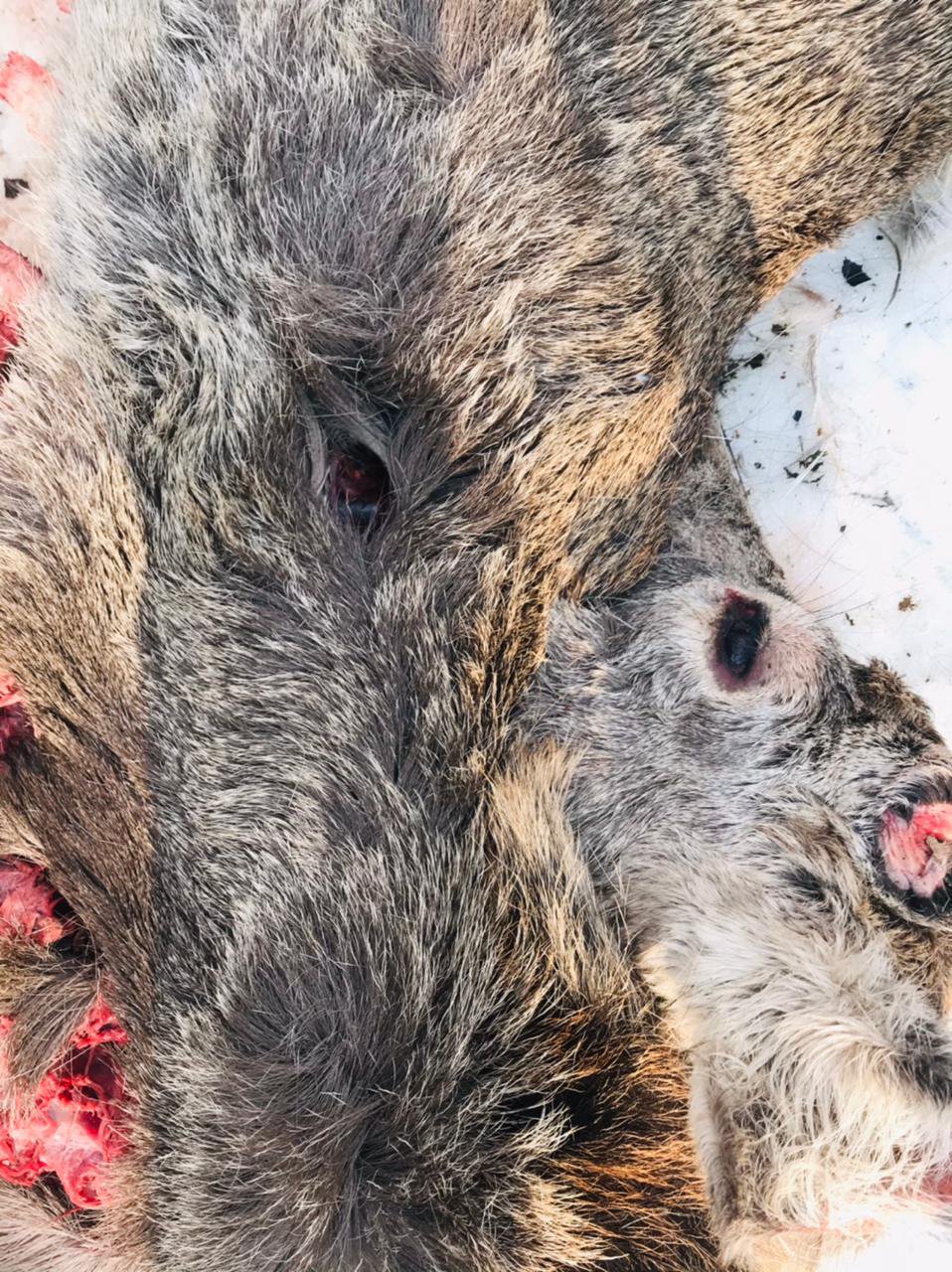 Suspected bullet wounds on the body of the dead Hangul

It was a stag. Its antlers had been sawed off and taken away. Deer antlers are used in some preparations of Chinese traditional medicine and are therefore sought after by poachers and traffickers.

Altaf Hussain, Wildlife Warden of Central Kashmir, confirmed that the Hangul had died, but added, “It is too early to conclude that the Hangul has been hunted down. It is unfair to jump to a conclusion when we are still ascertaining the causes of the Hangul’s death.”

The Jammu and Kashmir Wildlife Department has filed a formal complaint with the police and has sent a sample from the carcass to a forensic laboratory in Chandigarh. “Once we get the result, we will be in a position to give more details on this,” Hussain told The Third Pole. 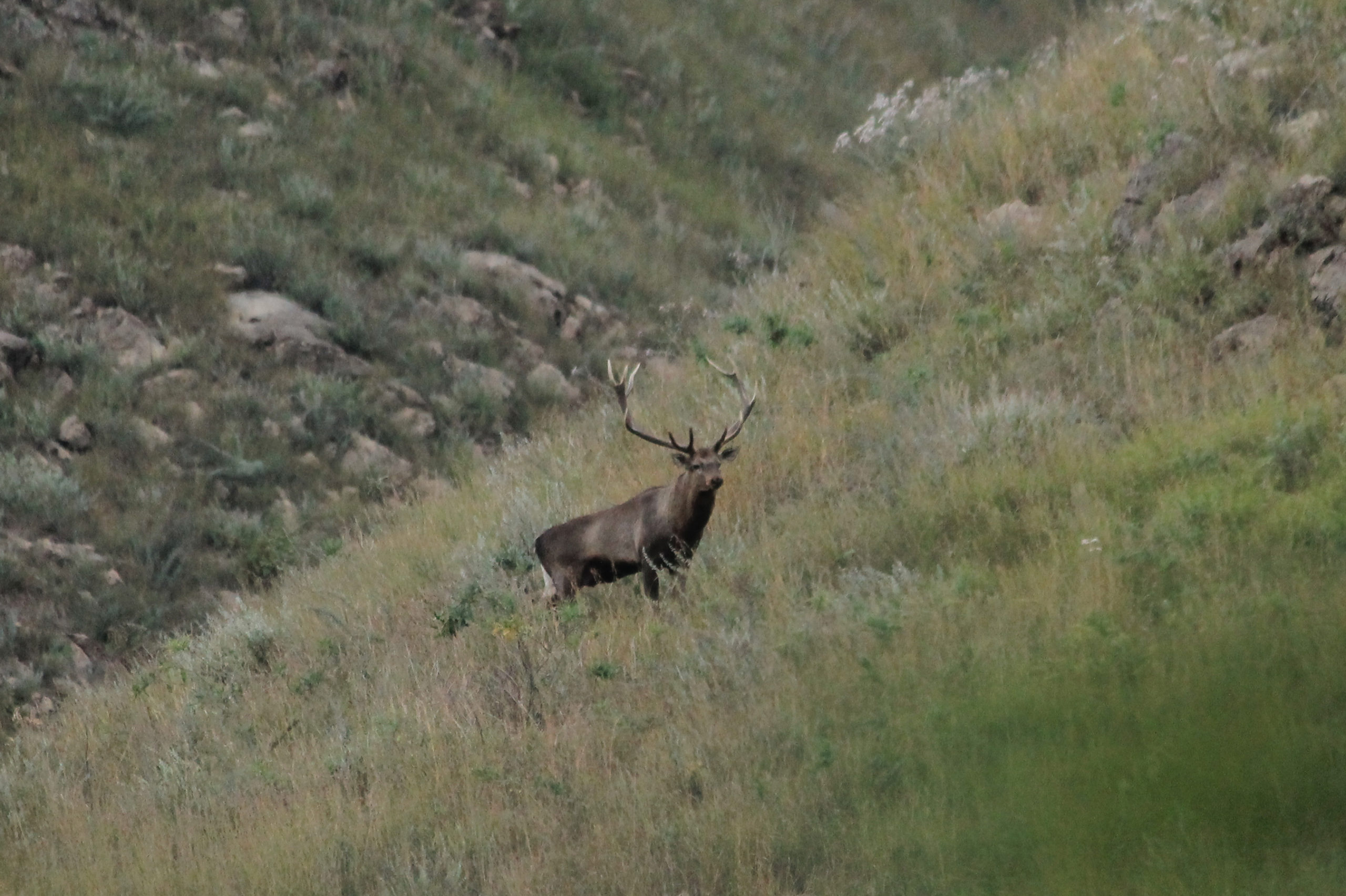 A Hangul stag in the Dachigam National Park [image by: Khursheed Ahmad]

The state animal of Jammu and Kashmir, the iconic Hangul (Cervus hanglu hanglu), also known as Kashmir red deer and Kashmir stag, is under Schedule I of the Indian Wildlife (Protection) Act, 1972 and the J&K Wildlife Protection Act, 1978.

That is supposed to provide maximum legal protection to the deer that is part of the elk family. The International Union for Conservation of Nature’s (IUCN) Red Data Book – which lists species at risk of extinction – has declared the Hangul as one of three species in Jammu and Kashmir that are critically endangered. The other two are the Markhor – the world’s largest species of wild goat found in Kashmir and several regions of Central Asia – and the Tibetan antelope or ‘Chiru’, found mostly in the mountainous regions of Mongolia and the Himalayas.

Experts say that until the early 1900s, Hangul were widely distributed in the mountains of Kashmir and parts of Chamba district in adjacent Himachal Pradesh, north and east of Jhelum and Chenab rivers. The population was estimated at around 5,000.

But, according to the latest survey in 2019, there are only 237 Hangul left, all in and around the Dachigam National Park near Srinagar, the summer capital of Jammu and Kashmir. 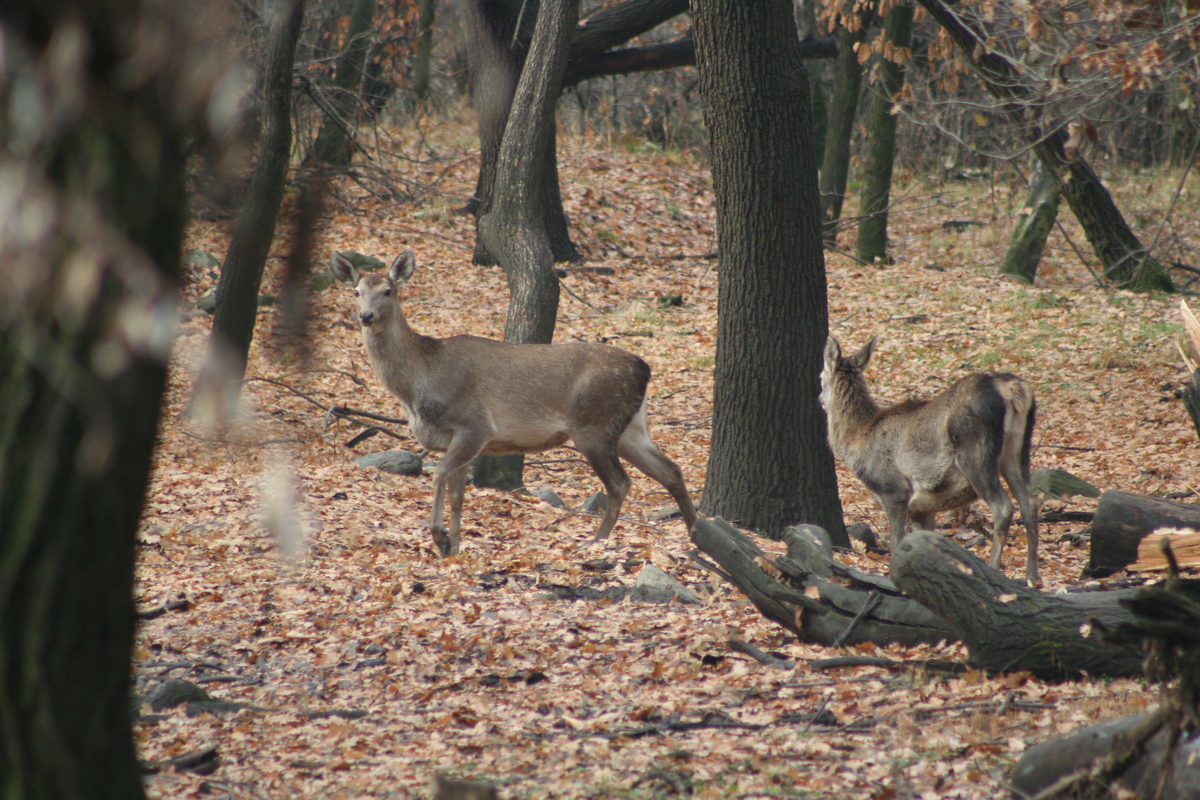 A female Hangul with a fawn [image by: Khursheed Ahmad]

Many signs of wildlife trafficking

A fortnight after the finding of the Hangul carcass, on January 31 the Wildlife Crime Control Bureau (WCCB) of India’s federal Ministry of Environment, Forests and Climate Change (MoEFCC) stated that it had seized a cache of wildlife contraband in Jammu and Kashmir.

“Acting on the basis of intelligence… a joint and well-coordinated operation was conducted by WCCB, Wildlife Division of J&K Forest Department & J&K Police which resulted in huge seizure of wildlife contrabands (sic) and arrest of two kingpins in Manwal and Anantnag, J&K on 30th January, 2021,” the statement said. 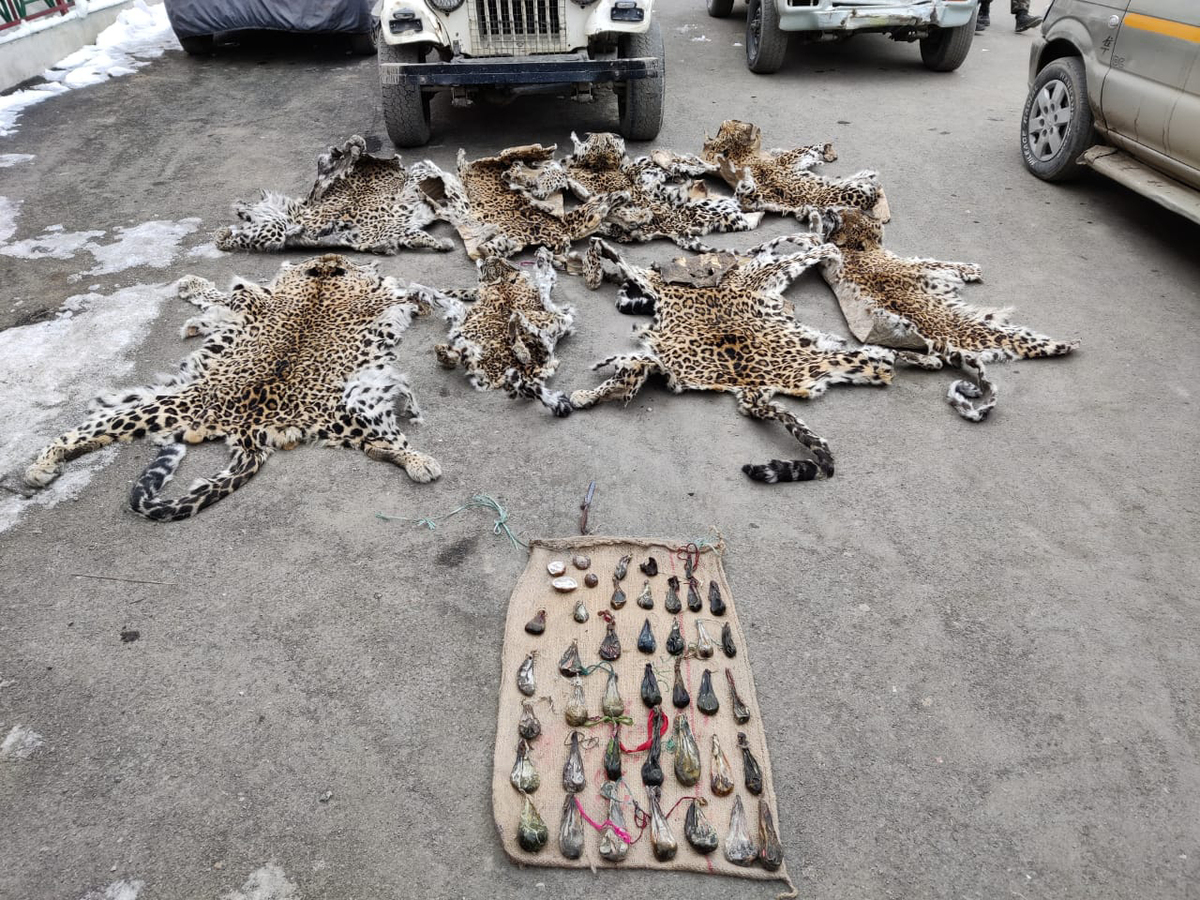 The seizure from alleged wildlife traffickers [image by: Ministry of Environment, Forests and Climate Change, Government of India]

In cases of international smuggling – be it of wildlife, humans, drugs or arms – Interpol has a rule of thumb: for every consignment caught, ten get away.

Reacting to the WCCB announcement, Mridula Paul, senior policy analyst at the Bangalore-based Ashoka Trust for Research in Ecology and the Environment (ATREE) said there was very little information about the whole scandal.

“Are locals involved, or is this a job by outsiders? In case locals are involved, then what is the context in which this is occurring? Fighting just the final outcome without understanding the circumstances may not be helpful in preventing these crimes in the long term,” Paul told The Third Pole.

While it is important to investigate cases of poaching, it is also important to ask government and NGOs about all forms of crimes against wildlife, Paul added. “For instance, these crimes committed by individuals are nowhere on the scale of sanctioning a railway track through the Western Ghats, that was done by MoEFCC. It is perhaps easier to go after the small guy rather than create systemic change or question big corporations that mine and cause environmental destruction.”

Along with the poaching of Hangul, leopards, bears, musk deer and other mammals, poaching of birds is also worrying wildlife lovers and experts in Kashmir. In November last year, two of the four white Bewick’s Swans that had migrated to Kashmir for the first time were poached in northern Kashmir within days of their arrival.

“We had reports about arrival of four Bewick’s Swans in Kashmir – this excited us all,” said an official of the Wildlife Department. “But, unfortunately, two of them were hunted down within a week. While we are sure about the poaching, we might never know about the poachers.” Bewick’s Swans (Cygnus columbianus) migrate southwards from Siberia in winter. 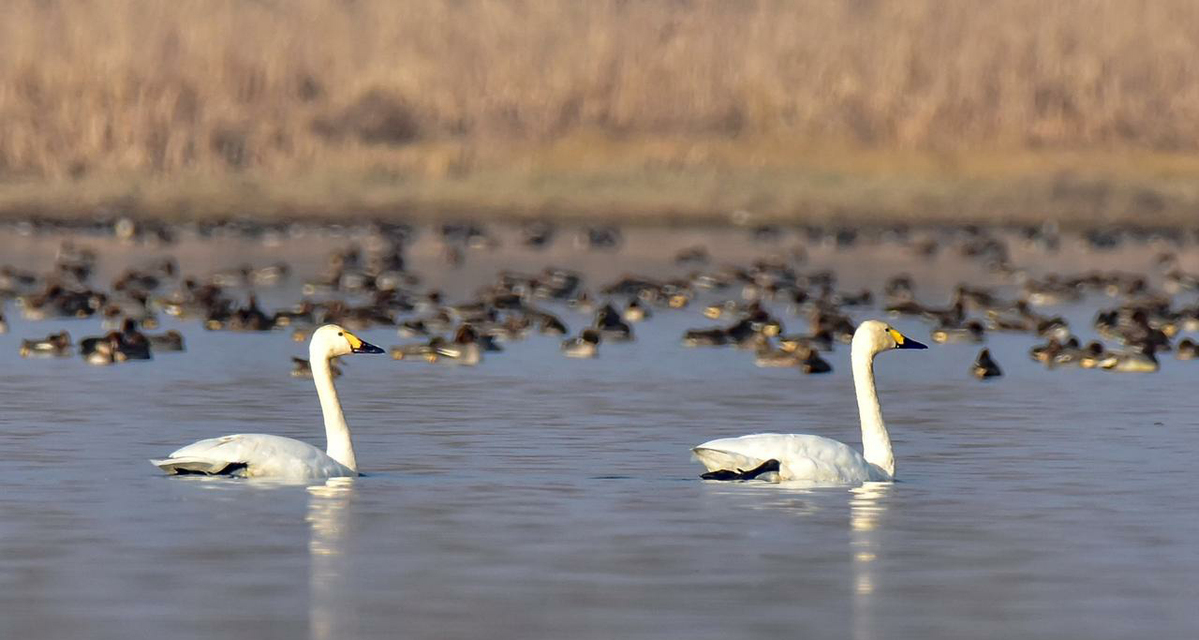 At the start of 2017, Sher-e-Kashmir University of Agricultural Sciences and Technology (SKUAST) started a research project to study the migration pattern of birds that visit the wetlands of Kashmir every winter. According to principal investigator of the project, Khursheed Ahmad, it is a pioneering study aimed mainly at assessment of movement patterns of 12 migratory waterfowl species – especially ducks, geese and swans.

Ahmad and his team began the study by ringing 200 birds and followed it up in February 2018 with tagging five birds with satellite transmitters (also called Platform Transmitter Terminal, PTT). The birds, which were ringed and tagged included mallard, shoveler, grey legged geese and gadwall.

However, within months, Ahmad and his team stopped receiving signals from the birds fitted with PTT. He suspects the birds were poached. “They survived for a few weeks only,” Ahmad said.