The largest oxbow lake in Asia is dying. Kanwar lake, in the state of Bihar in eastern India, was formed thousands of years ago by the meandering of the Gandak river. Over the past 20 years the protected area and bird sanctuary has shrunk rapidly – but not because of climate change.

Mohammed Nawazuzzoha, a research scholar at Jamia Millia Islamia university in New Delhi, has carried out more recent analysis on the size of the lake, which is in the district of Begusarai. He told The Third Pole, “The lake area decreased by 8.9% from 1998 to 2018. I have excluded the areas occupied by weeds, aquatic plants or agriculture and the final results show that the lake area is as low as 89 ha.” 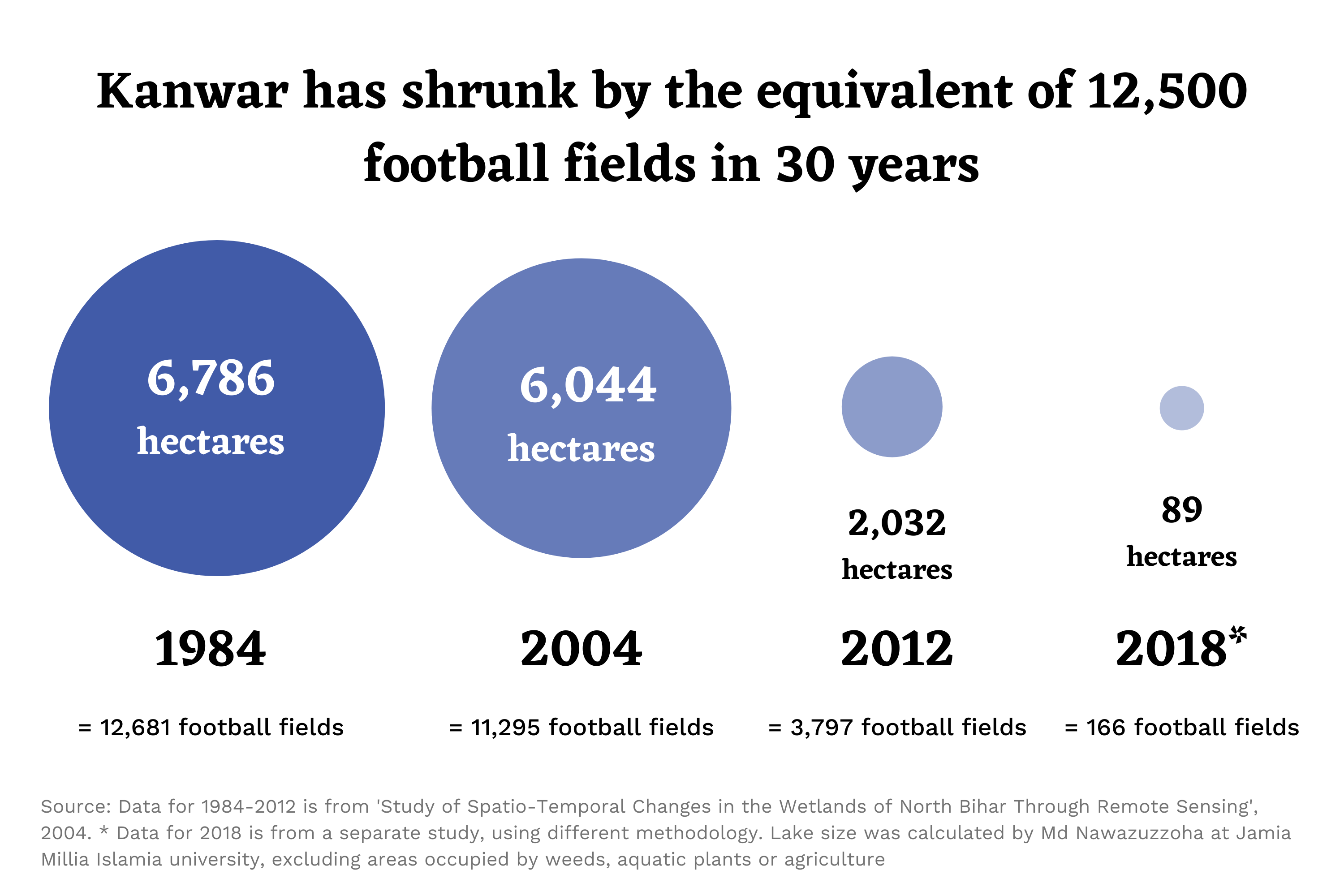 Ghosh’s research found that the wetland is diminishing due to mismanagement, encroachment and deliberate attempts to dry the lake. As the water has retreated, the land left behind has been occupied by agriculture, housing settlements and a brick factory.

Two groups have competing interests in Kanwar lake: the fishing community, or Sahnis, and the landlords, or Bhumihars. The Sahnis want to safeguard the lake as it is the source of their livelihood, while the Bhumihars want to use the land it covers for agriculture.

Nawazuzzoha said that his analysis of satellite imagery shows that agriculture in the wetland has increased by about 12% over the past 20 years. According to Ghosh, almost 60% of the lake’s area is being used for agriculture. Today, much of it is covered by paddy fields, making the lake difficult to identify. 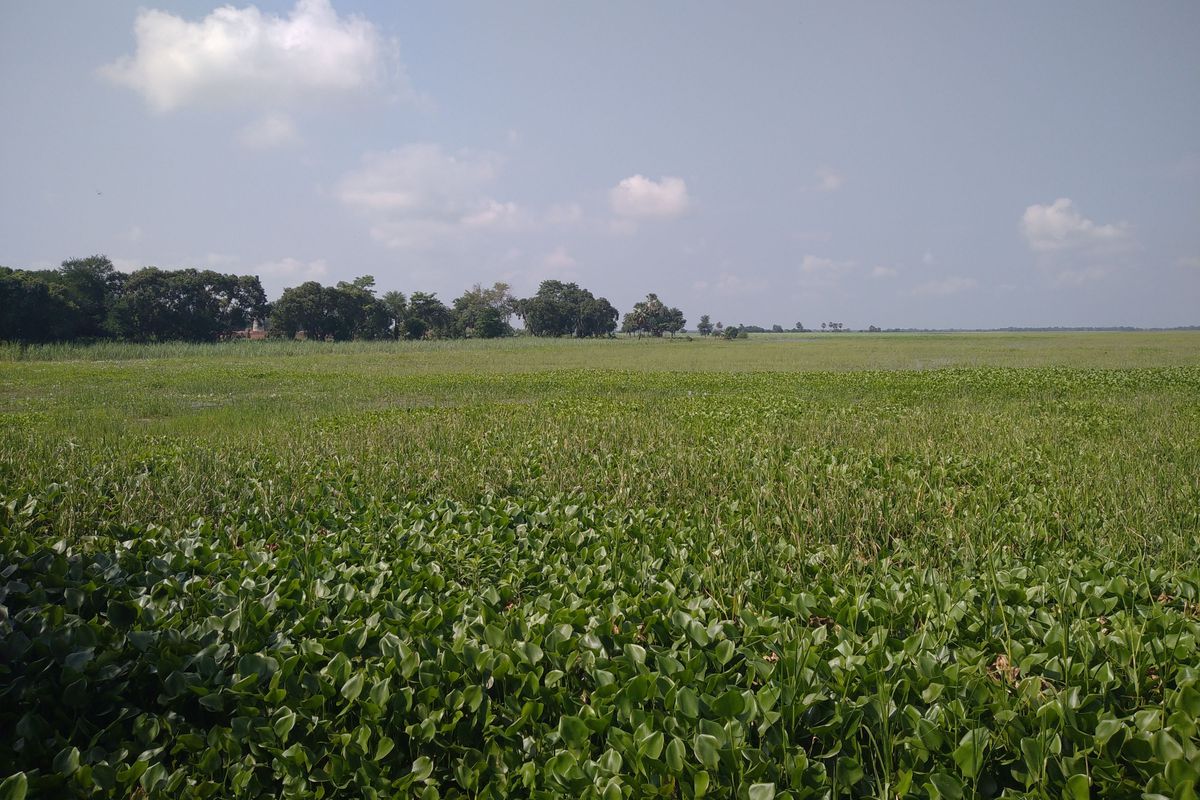 Much of Kanwar lake is now covered by plants [image by: Majid Alam]

Arvind Kumar Verma, the district magistrate, said there are no official figures on the exact number of people affected by the conflict, but Land Conflict Watch, a project that maps and analyses land and resources conflicts in India, estimates that about 500 people are impacted.

A canal connecting the lake to the nearby Gandak river is at the centre of their struggle.
“The canal used to recharge the lake and was also used for transportation from the lake through the river,” said Ghosh.

The Third Pole’s correspondent visited the area in October 2020 and May 2019, and observed that this inlet was blocked, with some areas completely filled in. Ghosh said the blockages appeared between 2002 and 2003. Both Ghosh and Nawazuzzoha said that structures had been built by landlords to intentionally choke the canal and dry up the lake.

A landlord who spoke to The Third Pole on condition of anonymity said the channel “dried due to the accumulation of sand in the way” and that this was a “natural process”.

Heavy monsoons in the past three years, especially in 2020, have filled the lake: the fishermen told The Third Pole that between August and November the lake swells with water. Both researchers said that the landlords now want to open the canal as they have realised that it is holding water in the lake and not allowing it to drain. 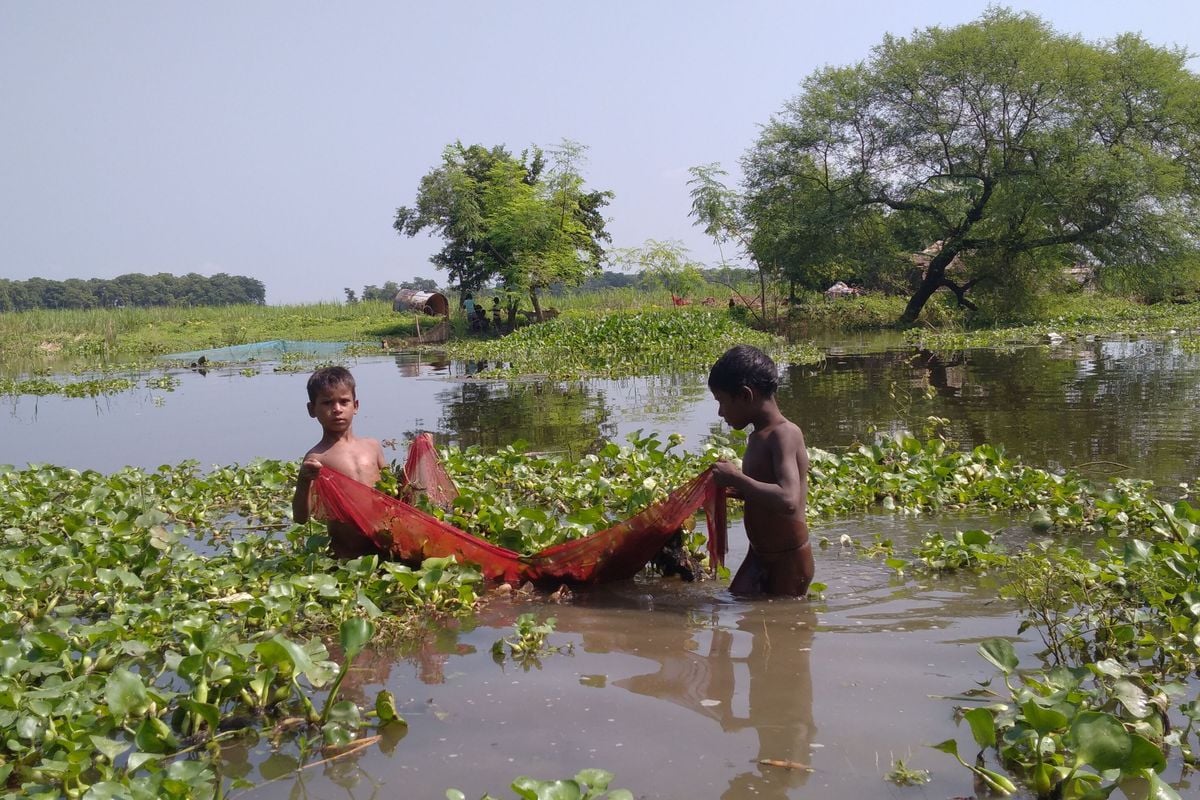 Between August and November the lake fills up [image by: Majid Alam]

“Under the Jal Jeevan Hariyali programme of the state government [an initiative to strengthen Bihar’s environment], [the district administration is] planning to revive the connecting channel from the Kanwar lake to the Gandak river,” said Verma. The landlords support this initiative.

One of the biggest challenges to resolving this problem is the lack of leadership by the authorities. “Throughout the course of my research, I haven’t come to realise the ownership of the Kanwar lake; whether it’s under the wildlife or the irrigation or agriculture department,” Ghosh said.

Nawazuzzoha agreed that responsibility for the regulation and maintenance of the lake had not been established by the authorities.

The local fishers also said the government has turned a blind eye to the lake’s conservation. “We haven’t seen a project in the Kanwar lake for a very long time. Some officials visit the lake for inspections, but no work is carried out,” a fisherman added.

Verma confirmed that no conservation or developmental projects have been carried out in the past 10 years, attributing this to a dispute over ownership of the land. 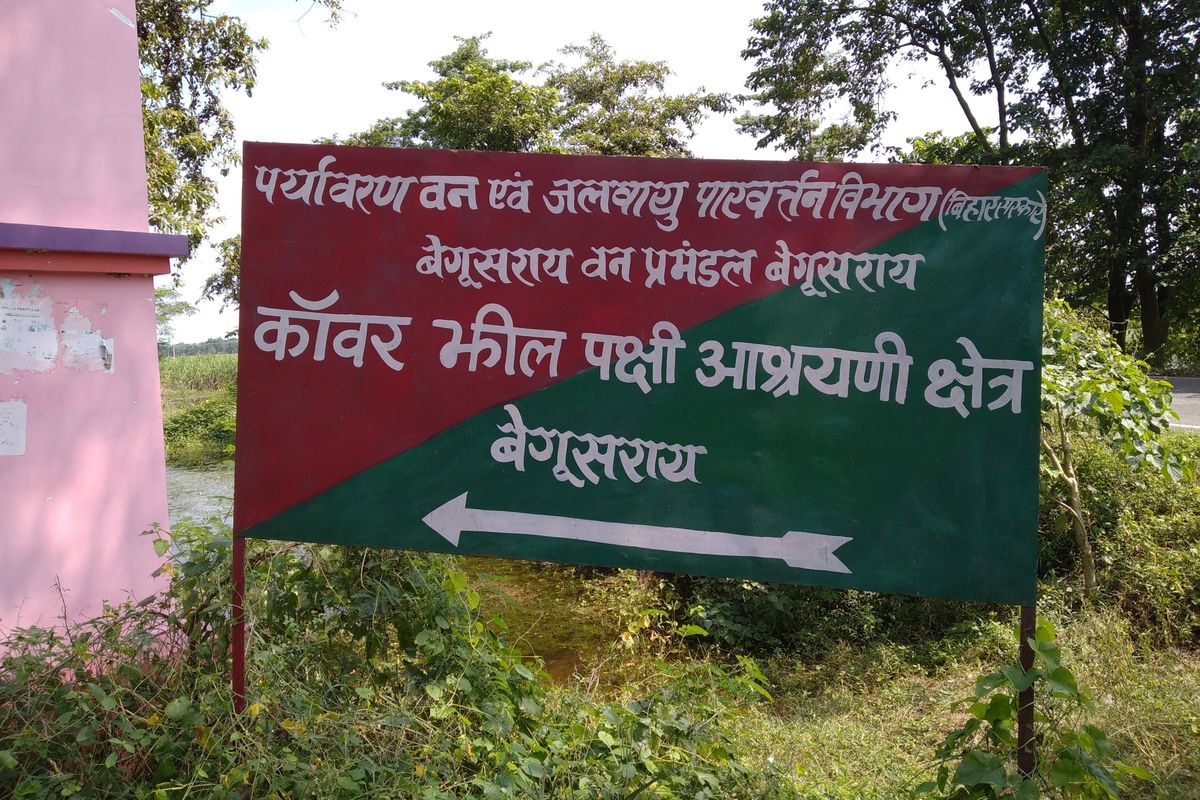 Despite a notice pointing to a bird sanctuary put up by the state government’s department of forests and environment, it is unclear which government institution has final charge of Kanwar lake [image by: Majid Alam]

The district administration started demarcating the lake for conservation in 2013, prohibiting the sale and purchase of land. The landlords objected to the move, claiming they owned the land, and filed a case in the Bihar High Court. The case is pending.

The landlord who spoke to The Third Pole said, “The land was ghair mazaruah khas [had owners but no deeds or documentation] until the late 1960s, then the government tried to make it ghair mazaruah aam, or public land… After independence the land was under water so there was no proper mapping of it, hence it wasn’t documented under the names of their owners. After the land was declared a bird sanctuary, the authorities started looking for owners.”

He added, “Now the government wants to own the land they have to give us compensation. Over time the price of land has significantly increased… Either they have to pay a hefty price, which they won’t, or they have to keep the matter pending.”

Verma, the district magistrate, said, “We had demarcated the lake area for its conservation. Then some people had filed a case claiming the land in the High Court. The forest department, the district administration is involved in the case. The local body has been asked to demarcate the lake area. The final order has been delayed due to the Covid-19 pandemic.”

Despite the controversy, the fishers told The Third Pole that local landlords continue to sell the land unchecked.

A vast number of birds once thrived in the wetland, and in 1989 the central government declared it a bird sanctuary. Salim Ali, the famous ornithologist, visited the lake and identified 60 species of migratory birds and 106 species of resident birds.

Before that, the lake was declared a protected area in 1986 by the Bihar government under the Wildlife (Protection) Act of 1972. This legislation prohibited poaching as well as agricultural and industrial activity in the area, Verma said. 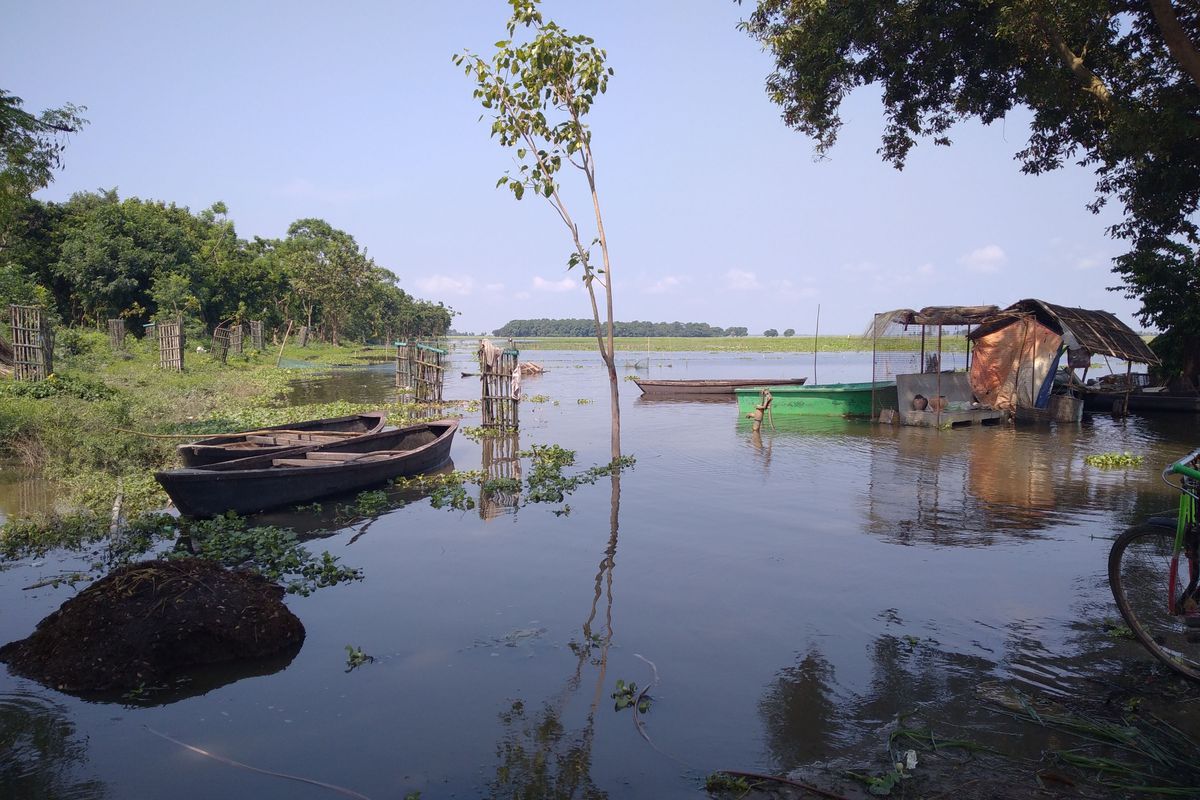 The large lake was an ideal nesting ground for migrating species of birds [image by: Majid Alam]

“Due to the encroachment in the lake over the past two decades, there has been disposal of waste into the lake [which has] polluted the water. The shrinking area has resulted in fewer migratory birds in the region,” said Nawazuzzoha.

He said that 15 migratory bird species have stopped coming to the lake. “Out of the 106 species of birds identified by Salim Ali in the 1980s, around four are no longer found in the region.”

The degradation of the lake has had consequences for the fishers. “The daily catch of fish used to be up to 5-6 kilogrammes for a fisherman, but as the water reduced the daily catch fell and traditional farmers started abandoning the place,” said a fisherman.

Over time, the fisherman said, the Sahni population shrank as the younger generation migrated to cities in search of work. When The Third Pole visited earlier this month, about 20 fisherman, mostly in their 60s, were rowing their boats in the shallow water left after the monsoon rains.

“If you want to conserve the wetland you have to go against the interest of some landlords,” Ghosh said.
One impact of Kanwar Lake’s decline as a biodiversity hotspot is the area misses out on the opportunities ecotourism brings. There is no official data on the number of tourists who visit the lake, but a fisherman said that some tourists come during the festive season and for the new year. For most of the year, very few tourists visit the lake.

As polling for Bihar’s next assembly gets under way, for the first time, the Vikassheel Insaan Party (VIP) will contest some seats in the area, scheduled on November 3. The party is contesting some seats around the district in alliance with the Bharatiya Janata Party, the ruling party in India and the partner in the state’s ruling coalition.
VIP’s founder, Mukesh Sahani, is from the district of Khagaria next to Begusarai, and has been working with the community since 2013. The party has support among fishing communities, of which there is a significant number in northern Bihar.

When The Third Pole asked the fishers who they would support, they said, “We now have our party [the VIP]. But they don’t have candidates in every district. So the party cadre workers inform us who we have to vote for in that constituency and the community votes for them.” In Begusarai, the VIP’s alliance partner, Janata Dal (United), will contest the constituency. It is the party of Nitish Kumar, the chief minister of Bihar.