When Pramod Bhattarai assumed his office as chief conservation officer at Nepal’s Langtang National Park in November 2021, invasive species were not on his agenda. The growth of non-native plants had been a concern when he was stationed in Banke National Park in Nepal’s southern lowlands, where they were crowding out the native vegetation that feeds the park’s protected animals. But having never heard reports of invasive species in Langtang, in the Nepali Himalayas, he was confident that the high altitude park was not troubled by the problem.

This assumption was shattered when Bhattarai found parts of the park invaded by non-native trees and bushes. “Thanks to climate change, the vegetation, in general, is shifting upwards, and it is bringing invasive alien species such as banmara to compete with native grasses,” Bhattarai tells The Third Pole. “As a result, musk deer and Himalayan tahr [a large wild goat] in the park might soon face difficulties in finding food.”

Ageratina adenophora, a flowering plant known locally as banmara, is native to Mexico but now grows wild in many parts of the world. It is a concern for conservationists in Nepal because it spreads quickly and grows so densely that native plants are crowded out. It is also toxic to livestock and native mammals.

What is an invasive species?

An invasive species is a plant or animal that is reproducing in the wild in an area where it is not native, having been introduced as a result of human activity, and which has a negative impact on native species and ecosystems.

Not all introduced species become invasive, but invasive species can be a major driver of biodiversity loss and species extinction.

Globally, invasive species have been identified as one of the top five drivers of biodiversity loss. Their impacts – often involving out-competing or predating native species – have been observed in different ecosystems across the world, from high mountains to wetlands and oceans.

Consequently, stakeholders such as Bhattarai are calling for comprehensive research into the problem in Nepal’s highlands, and appropriate strategies to deal with it.

The upward shift of invasive species in Nepal

Nepal has ample experience of the damage that invasive plants can wreak on protected areas. Mikania micrantha, a species of vine native to the Americas, has been found in Chitwan National Park in Nepal’s lowland Terai landscape since the 1990s. During the 2021 count of the park’s flagship one-horned rhinos, 35% of rhino habitat was found to be invaded by Mikania, according to Babu Ram Lamichhane, chief of the National Trust for Nature Conservation-Biodiversity Conservation Centre (NTNC-BCC). The fast-growing vine smothers the native plants which provide food for the rhinos, which has forced the animals to seek fodder outside the park, causing conflict with local communities.

Maheshwar Dhakal, chief of Nepal’s federal Department of National Parks and Wildlife Conservation, says that while lowland areas have been seriously impacted by invasive plants, reports of the problem in Nepal’s high-altitude protected areas “are still hypotheses” for now. “We need a detailed and comprehensive study to prioritise control measures there,” he says. 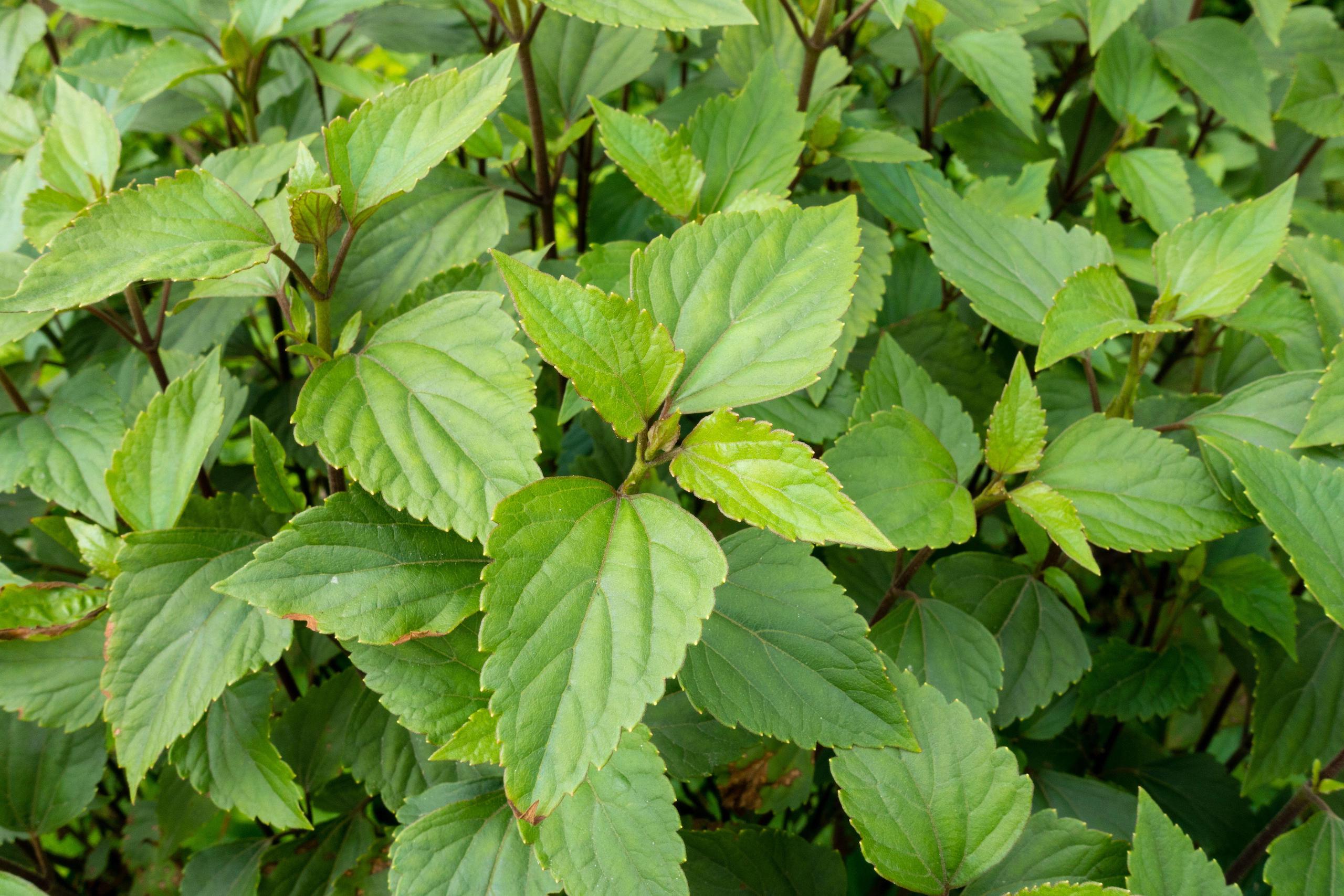 But Laxman Prasad Paudyal, chief conservation officer of Shivapuri Nagarjun National Park, which spans 960-2,732m above sea level, echoes Bhattarai regarding the presence of invasive species in Nepal’s mountains. “I have seen non-native species such as Lantana camara and Ageratina adenophora [banmara] while travelling around the park,” says Paudyal.

Native to tropical America, the shrub Lantana camara can form dense stands of vegetation that suppress native vegetation, and is toxic to livestock and wild mammals. Paudyal says the only reason the issue is not considered disastrous in the park is a lack of comprehensive research outlining the scale of the problem.

In the absence of government reports on invasive species in high-altitude areas, some academics have been working to fill the information gap. So far, research efforts have largely been focused on either a particular protected area or species.

A team led by Dipak Khadka, a researcher at Kathmandu’s GoldenGate International College, conducted a survey in Shivapuri Nagarjun National Park in 2018. At altitudes between 1,400 and 2,100 metres, they recorded nine invasive plants species, including Ageratina adenophora, Lantana camara and Bidens pilosa.

“They have affected the protected fauna by destroying their food,” Khadka says. “For example, to protect leopards, you need to protect deer or other similar herbivores. [These, in turn] need enough grassland and bushes, but they are [displaced] by [invasive] plants.” These species are less palatable to the park’s wild herbivores.

Khadka’s team conducted a follow-up survey in the national park in June 2022, the results of which are yet to be published. But he says the survey showed that “the presence of invasive species such as Lantana camara and Bidens pilosa is on the rise there. It’s high time they started some control measures.”

Seerjana Maharjan, a scientist at the government’s Department of Plant Resources, studies Parthenium hysterophorus, a flowering plant native to South America which can have significantly negative impacts on agriculture. Maharjan has forecast an alarming growth of the plant in three protected areas in Nepal’s hilly regions: Langtang National Park, Annapurna Conservation Area and Manaslu Conservation Area. 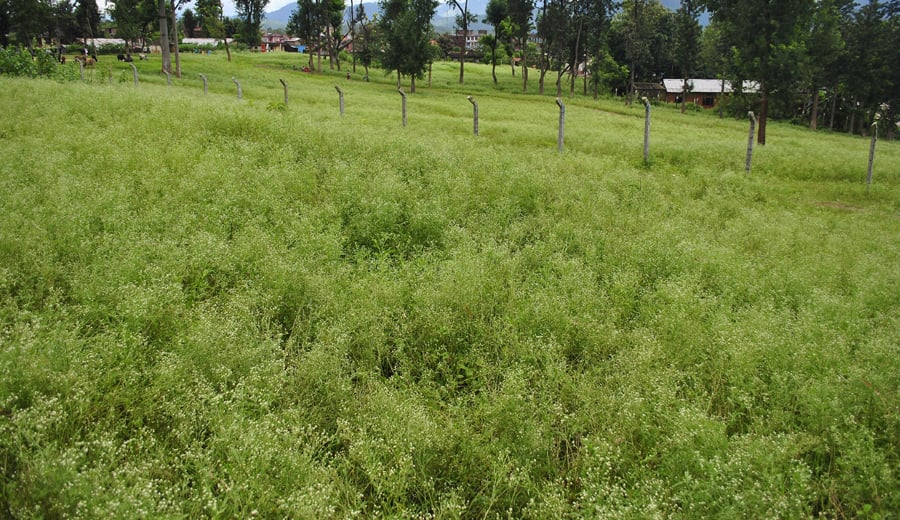 “Whereas the Terai, the lowland region, has been found most suitable for the plant now, the suitability will gradually shift to Siwalik [highlands between 120-1,800m], mid-mountain and high-mountain regions in the future, all thanks to climate change,” Maharjan tells The Third Pole.

Maharjan is concerned that the species’ impact goes beyond competition with native plants. “They also decrease the soil’s fertility for local agricultural produce, [an impact that] lasts much longer. Further, their pollens cause allergy and other health issues among people and animals living in the area.”

Another team of researchers from Nepal and the United States has studied the possible growth of Ageratina adenophora in the same Chitwan-Annapurna landscape region, and came to similar conclusions in a 2020 paper. “All protected areas and three physiographic regions (Siwaliks, High Mountain, High Himalaya) are likely to gain climatically suitable areas in future climate scenarios. The upper elevational distribution limit of the weed is expected to expand by 31-48m in future climate scenarios, suggesting that the weed will colonise additional areas at higher elevations in the future,” the paper reads.

Bharat Babu Shrestha, a botanist at Tribhuvan University, warns that Nepal’s high-altitude protected areas are being left vulnerable to spreading invasive species. A recent study co-authored by Shrestha, which drew on published literature and first-person experience, found at least one invasive species in 15 out of 19 protected areas in Nepal, 12 of which were high-altitude.

The study emphasises the lack of research in mountain areas, stating: “There was no study on invasive species in the Ramsar sites [important wetlands] located in the High Mountains (Gosainkunda, Gokyo, Rara and Phoksundo lakes).”

“Protected areas in Nepal [with their] rich biodiversity are no longer protected from invasive species,” says Shrestha. “The buffering capacity of protected areas has become weaker thanks to these very species, and it has the impact not only on the environment but also on tourism – we have seen how the growth of Mikania micrantha meant the loss of rhino habitat in Chitwan.”

Protected areas in Nepal • Map by The Third Pole

But so far, dedicated programmes to control invasive plants have been focused only on Chitwan and Shuklaphanta national parks, in the lowlands. These are run by the government in association with the National Trust for Nature Conservation (NTNC), and have included manually cutting Mikania micrantha, and releasing beetles to destroy Parthenium hysterophorus.

Shrestha feels that authorities should act now to control invasive plants in Nepal’s mountains, before the problem becomes as severe as in the southern lowlands. “Controlling measures are more effective when you apply them in early stages,” he says. “It’s the right time for authorities to shift their focus northwards.”

Maheshwar Dhakal, who became chief of the federal Department of National Parks and Wildlife Conservation in August, says controlling invasive species will be a priority during his term. But without a comprehensive study of the problem in northern regions, he could not comment on what has to be done there. “We need to study the nature and extent of the invasion of individual species in individual protected areas before that; research will also be our priority from now onwards,” Dhakal says.

Researchers agree that more research is key. “There is a lack of comprehensive knowledge of biological invasions drivers to the protected areas, dispersal pathways, and ecological impacts of the invasive alien plant species,” concludes the study co-authored by Shrestha. “Further research on the above topics, together with regular monitoring and survey of the invasive alien species in each protected area, can generate data and knowledge required for the authorities’ management decisions.”