Bangladesh, India, and Myanmar have agreed their borders in the Bay of Bengal, but neither fish, nor fishers are bound by the lines on the Exclusive Economic Zone (EEZ) map. The fish do not know. In the hope of a better catch, fishers cross boundaries, knowingly or unknowingly. As more boats chase fewer fish, clashes are common.

Fishers based in Cox’s Bazar and Patuakhali fish harbours in Bangladesh say that, traditionally, they used to fish along side vessels from other countries in the deep sea. Now, as it is becoming harder to find fish, foreign fishers are unwelcome competitors. Authorities have seized vessels from Sri Lanka and arrested fishers off the shores of Bangladesh. Sometimes the conflicts are dealt with more directly. The sinking of smaller vessels sometimes goes unreported, said several trawler skippers from Chittagong on the condition of anonymity. 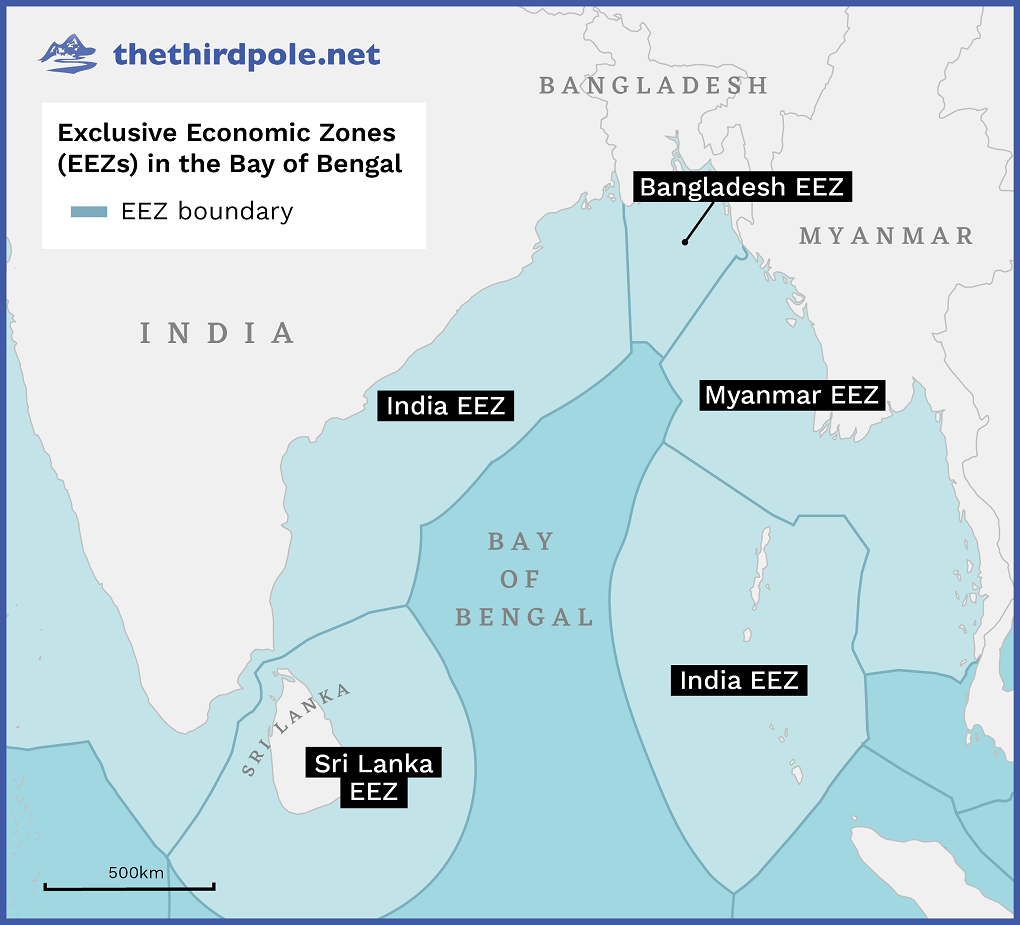 Conservationists and fisheries managers warn that if countries cannot transform conflict into collaboration it is not just the safety of the fishers at stake: the dwindling number of fish in the bay could disappear.

With eight countries bordering the Bay of Bengal, around 200 million people live along its coasts. Most of them depend on the fish for their food and livelihood, and a majority of the fishers are below the poverty line. But the fisheries of the Bay of Bengal have been under pressure for decades and are now severely depleted. Hundreds of large vessels are overfishing at an unsustainable rate and local fishermen say authorities often turn a blind eye.

The failure of the Bay of Bengal countries to cooperate over fisheries and wildlife risks undermining manyconservation measures taken on the national level, experts say.

There have been attempts to foster cooperation. India has the Bay of Bengal Initiative for Multi-Sectoral Technical and Economic Cooperation (BIMSTEC). The Global Environment Facility and UN Food and Agricultural Organisation (FAO) set up a process to promote sustainable fishing among the eight countries, but not much has changed on the water.

Tensions and arrests at sea

Bangladeshi fishers view their government’s annual 65-day fishing ban as unjust, because they say fleets from neighbouring countries fish in Bangladesh’s waters during the ban. Officials say it is to protect spawning fish and rejuvenate fish stocks.

Mahatub Khan Badhon, a lecturer of zoology at the University of Dhaka, said, “The perception of uneven enforcement of the marine fishing ban affects the compliance of fishers and encourages fishers to delegitimise any such management measures.” Badhon believes that ramping up enforcement is not the answer. Arresting and putting foreign fishers in jail, whether by Bangladesh, India or Myanmar, only increases human suffering. There is no evidence from past decades that it helps conservation or reduces conflicts over fishing.

While a large number of artisanal or small-scale fishers are locked up in foreign jails for months, overfishing continues in the bay. As Nur Islam Majhi from Chittagong put it, “There are always others who will cross boundaries with a hope that there are more fish in the sea.” As a skipper of an artisanal gillnetter, he has two decades of fishing experience and numerous encounters with boats from other countries just south of Mongla port.

By jailing fishers countries are not following norms set down by international law, experts say. Yugraj Singh Yadava, director of the intergovernmental organisation of the Bay of Bengal Programme, says that the international law of the sea clearly directs countries not to jail or deliver any other corporal punishment to foreign fishers arrested in EEZs. Headquartered in Chennai, the body is pushing for closer regional cooperation over sustainable fisheries among the Bay of Bengal countries.

Article 73 of the United Nations Convention on the Law of the Sea (UNCLOS) says: “arrested vessels and their crews shall be promptly released upon the posting of a reasonable bond or other security.” The law and subsequent international agreements also have provisions for bilateral agreements, information sharing and other sorts of collaboration to avoid the suffering of fishers and protect fish that travel across national maritime boundaries. Yadava said, “International laws provide enough guidance to States to deal with the issue. However, none of the countries in the region are doing so.”

Mohammed Latifur Rahman, director of Bangladesh’s marine fisheries office, agrees. There is no effective collaboration among countries except a few opportunities for dialogues, he said. He hoped that India, which has the longest coastline along the Bay of Bengal, could help neighbours conduct collaborative explorations and studies on joint fish stocks. “We need processes and mechanisms for data sharing and a functional platform to cooperate in marine fisheries management,” he said.

Back in 2012, a study commissioned by the UN FAO’s Bay of Bengal Large Marine Ecosystem project made several recommendations to deal with the arrest and repatriations of fishers, including joint patrols.

The Bay of Bengal Large Marine Ecosystem Project is the only internationally funded initiative to facilitate transboundary collaboration for marine fisheries and environmental issues. But more than one decade after its launch, very few of the recommendations have been accepted by the respective governments.

In the long run, countries will need bilateral or multilateral agreements for the repatriation of fishers. The roles of employers, vessel owners, and governments need to be clarified. Countries also need to regularly inform artisanal fishers of the issues involved.

Many fish stocks regularly move between EEZs of two or more countries to feed or to spawn. Yadava explained that a few fish species like the Indian mackerel and the threadfin bream are distributed along the entire bay. Some other species like Hilsa and the Bombay duck are primarily found in specific areas. Smaller pelagic fish, such as anchovies, herrings and Hilsa, migrate through the coastal waters of two or more countries. Some small pelagic fish, like the rainbow sardine, are found along the coastlines of all the Bay of Bengal countries.

Even demersal species such as lobsters, sea cucumbers and reef fish disperse across boundaries during larval stages. For example, lobsters may travel thousands of kilometres from their place of birth to the site of an adult settlement. “Harvesting activities of one country significantly affects the harvesting opportunities of other countries sharing the [same] resource,” Yadava said.

“No studies have been conducted yet to identify fish stocks straddling across multiple EEZs,” said Mohammad Sharif Uddin, principal scientific officer of Bangladesh’s Marine Fisheries Survey Management Unit. “During the last joint working group meeting with India there was no progress on fisheries.”

There may be some hope of this changing. Six Bay of Bengal countries have now joined the 1995 United Nations Fish Stocks Agreement. The most recent entrant was Thailand, which ratified the agreement in 2017. Myanmar and Malaysia have still not joined yet. The agreement is about implementing UNCLOS provisions relating to the conservation and management of straddling and migratory fish stocks.

One of the significant parts of managing fisheries is reducing bycatch and conserving highly threatened species of marine animals. Badhon explained that species of sharks, rays, and sawfish migrate across large swathes of sea. Migratory species such as whale sharks, hammerhead sharks and sea turtles often get caught in fishing gear along with commercially important fish.

Steps taken by one country to protect migratory species won’t have the desired results unless other countries in the region follow suit, Yadava explained.

“Some of the countries protect these animals, but the scale of operation is not uniform. Without harmonised policy by all the countries in the region, conservation by one country alone may have limited benefits,” Yadava said.

The dugong inhabits the Palk Bay and the Gulf of Mannar, another transboundary area shared by India and Sri Lanka. The two countries are yet to agree on suitable strategies to protect this iconic species from threats from fishing operations.

Yadava added that active collaboration and joint management is essential if the fisheries of the Bay of Bengal are to be sustained. The countries are – in principle – not opposed, but as they drag their feet both the fish and fishers in the Bay of Bengal continue to suffer.