Wherever there are people, dogs seem to follow. Ecologist Chandrima Home knows this better than most.

Back in 2013, Home was studying feral domestic dogs in Spiti Valley, in the north Indian state of Himachal Pradesh, for her doctoral degree. She travelled extensively in the Himalayan landscape to understand the impacts of the animals.

“I estimated there were about 1,000 dogs in 25 villages covering over 4,000 square kilometres,” said Home. The canine population in India is an estimated 60 million, of which 35 million are feral or free-ranging. These numbers might be lower in the mountains, but they also have a more powerful impact.

In January 2021, the Himachal Pradesh government described the density of feral dogs as an “imminent threat” to the state’s ecosystem. This was in response to a survey conducted by a government-run conservation project called SECURE Himalaya, the forest department and Zoological Survey of India, which found there are on average nearly three feral dogs per 100 sq km in the remote, high-altitude region of Lahaul and Pangi.

“Dogs threaten local wildlife through direct predation, competition with other carnivores and through potential disease transmission,” said Kulbhushan Suryawanshi, a scientist at Indian NGO Nature Conservation Foundation (NCF). For instance, they have been recorded chasing snow leopards away from their kills.

While it is hard to estimate the direct impact dogs have on wild animals and endangered species, Home’s research has found that 48% of reported attacks by packs of dogs on native Indian species happen in or near protected areas. Nearly half of these cause the death of the attacked animal, with dogs preying on local wildlife like blue sheep, red panda, musk deer, red foxes, weasels, martens, pika and marmots. With many species already critically endangered, conflict with dogs can seriously impede efforts to help populations recover. 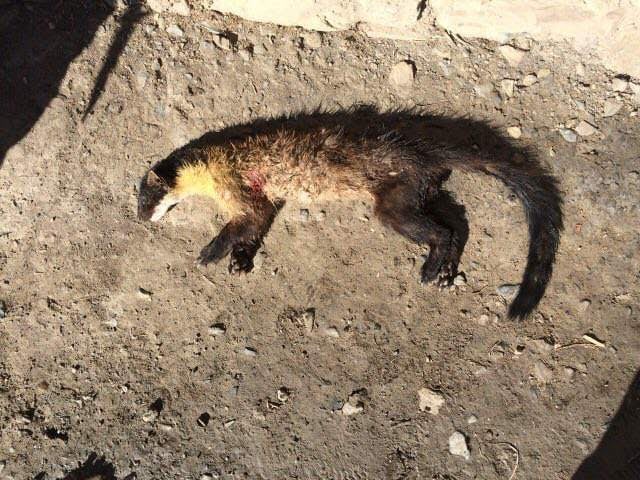 A yellow-throated marten, a small wild carnivore that is native to the Himalaya. Villagers had attempted to rescue this individual from a pack of six dogs, but the marten died from its injuries soon after the dogs were chased away [image by: Bikram Gurung]

“A pack of feral dogs can be ferocious and can even attack a large animal. They have a significant advantage over small livestock and wild animals that roam alone,” said Thinlay N Bhutia, programme coordinator and joint director of the Sikkim Anti-Rabies and Animal Health (SARAH) division, the first state-wide anti-rabies government programme in India.

Research indicates that in some areas of the Himalayas, dogs are responsible for more livestock kills than wild animals.

One study analysed dog attacks in 29 villages in the Spiti Valley between April and June 2013. Based on interviews with herders and pastoralists, it found nearly 63.5% of livestock losses were because of dog attacks, particularly on sheep and goats. Snow leopards and wolves were responsible for 28.5% and 8% respectively. Of the USD 46,662 worth of livestock lost to depredation and disease in 2013, dog attacks accounted for USD 17,522 (40%). 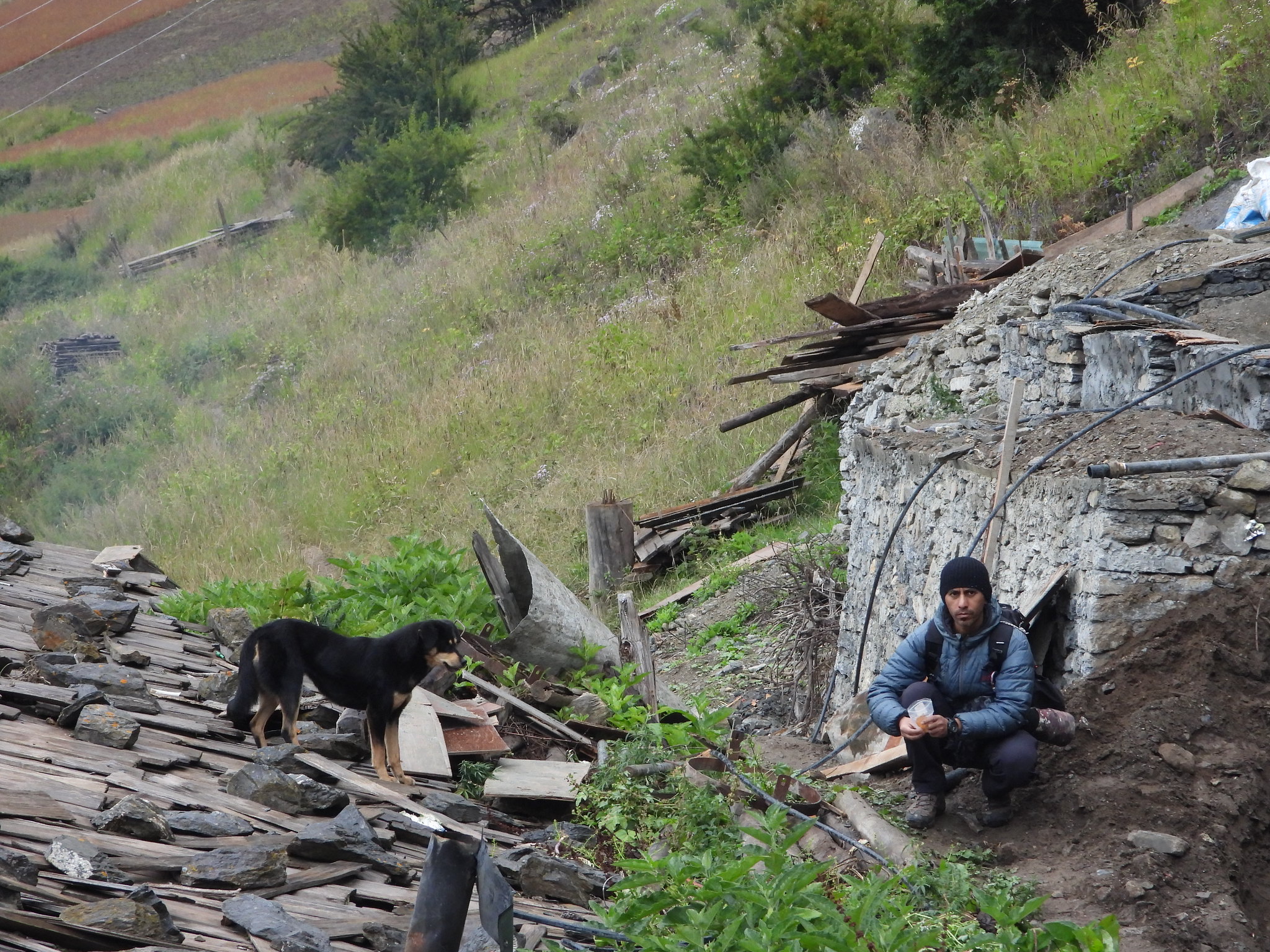 Research assistant with the Himalayan Mutt Project, Ajay Narsingh Rana, coaxes a dog down from the roof of a house in Upper Pisang village, Annapurna Conservation Area. A sample of blood was collected from the dog and analysed for pathogens, and the dog was sterilised by veterinarians [image by: Debby Ng]

Home told The Third Pole that predation by domestic dogs has changed livestock compositions in the past decade. Many villagers have reduced their small livestock holdings due to this and other socio-economic factors.

Feral dogs as vectors of disease

In 2012, thousands of dogs died in Sikkim due to an outbreak of canine distemper, a lethal viral disease. In 2014, researchers found that the same virus was killing tigers and red pandas in Uttar Pradesh and West Bengal.

Dog bites are also the main cause of rabies deaths in people. India, where about 20,000 people die from rabies every year, accounts for 36% of the global death toll from the disease. In remote Himalayan regions, where access to healthcare can be challenging, eliminating dog-mediated rabies is crucial.

“Dogs are everywhere in the Himalayas. Camera traps documenting snow leopards at altitudes between 5,000-7,000 metres have spotted dogs. But we don’t know how abundant they are,” said Debby Ng, wildlife disease ecologist and co-founder of Himalayan Mutt Project (HMP), an organisation that carries out free neutering and vaccination of dogs in Nepal.

Suryawanshi, from NCF, explained that the problem often starts off small. Pets may be abandoned or left by pastoralists, who own dogs to guard their herds, during migrations. However, Suryawanshi said, the initially small population of strays then thrives on the food waste in rubbish dumps and left behind by tourists and military camps.

Dogs breed swiftly. They can have up to three litters a year, with as many as seven puppies per litter, who will then themselves breed quickly.

“Once dogs attain high densities, then it is very difficult to contain them,” Suryawanshi said. Dogs in this region are often a mix of Tibetan mastiff and local breeds. They are therefore bigger and more powerful than those in the plains, making them hard to catch.

As well as in Himachal Pradesh, the problem has been reported in Jammu & Kashmir, Ladakh, and parts of Uttarakhand and Sikkim. It is also a serious issue in Nepal, Tibet and Bhutan.

Human solutions for a human problem

In 2014, Ladakhi officials ordered the culling of 20 dogs after a woman was killed by a pack. (This was suspended after protests by animal rights activists.)

Experts stress that rather than brutal measures, tackling this issue needs a multi-pronged, systemic approach.

Bhutia, from SARAH, told The Third Pole that in recent years the state has reported fewer incidents of dog bites.

“By improving dog health, you can improve human health too,” said Helen Byrnes, a veterinarian at Vets Beyond Borders (VBB) and volunteer at SARAH.

Ng co-founded HMP in 2014 in Nepal to reduce community and wildlife conflict with dogs and stop culling. “The World Health Organization recommends a systematic animal birth control and vaccination drive [to prevent rabies and stabilise dog populations],” Ng pointed out. 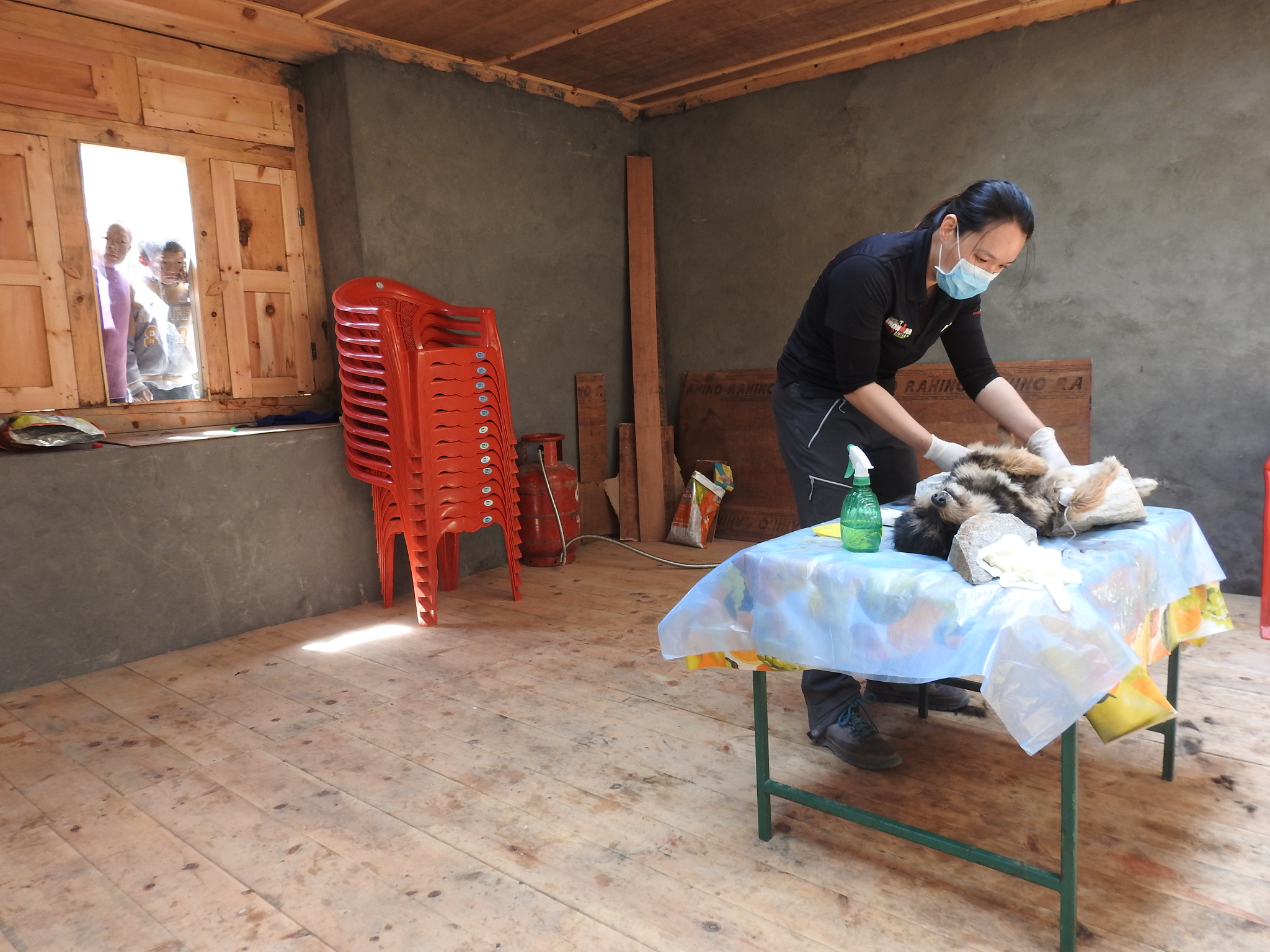 Gim Geok Ng prepares a dog for sterilisation as children watch her from the window at Pisang village, Annapurna Conservation Area [image by: Debby Ng]

SARAH and HMP have similar approaches. Dogs are tracked by trained handlers with community support; experienced veterinarians vaccinate and sterilise them; and after post-op care they are released or returned to their owners.

SARAH, along with volunteers from VBB and Fondation Brigitte Bardot, has vaccinated over 320,000 dogs and sterilised 78,000 since 2005. This involves communication and cooperation at various levels, from local people to state departments such as animal husbandry and health.

Bhutia explained that the economic losses from an uncontrolled feral dog population (rabies, loss of livestock, threats to wildlife) are far higher than the cost of running a track-neuter-release programme.

“Once you estimate the losses it is easier to persuade any government to start a systematic state-level programme,” he said. Sikkim’s response to the problem has been strengthened as there are strong pet ownership laws and penalties for violating them, he added.

However, there are many barriers to ensuring a rabies-free state and controlling the dog population. Sikkim shares a border with China, Bhutan and Nepal, and dogs can move between countries. Citizens also bring in dogs from other states.

“These are not one-off projects; we have to do them for years,” Bhutia said.

Another important factor is waste management, Home pointed out.

NCF has implemented dog-proofing at some rubbish sites, and found that there were fewer dogs in villages with these measures.

“We have to move away from seeing this as a dog problem. It really is a human problem,” said Ng. “Humans bring dogs into these places, and human choices can keep their population in check or cause it to explode.”

The Himalayan state of Bhutan tackles its stray dog menace