In the Pampore area of south Kashmir, just 14 kilometres from summer capital Srinagar, scores of families are involved in cultivating the indigenous crocus flower which is planted over thousands of hectares. The red saffron threads of this flower are carefully handpicked by harvesters – mostly women – to be sold at exorbitant prices around the world.
“When I was a child, I loved to visit the saffron fields – the flowers covering the land in a purple blanket amazed me. When I grew up, I understood that the more colourful the land, the better the crop,” said Rifat Jan, whose family and in-laws have been farming saffron for decades.

In Jammu and Kashmir, four districts – Pulwama, Budgam, Srinagar and Kishtwar – grow saffron. Among the four, Pulwama district’s Pampore has earned the title of Kashmir’s ‘saffron town’ for growing the best quality saffron. The soil quality in this area is highly suitable for its cultivation and yields the prized ‘Kashmiri saffron’ known for its aroma, colour and medicinal value.

Around 30,000 families in the Pampore area are associated with saffron cultivation. The town’s saffron is considered to be of superior quality because of the presence of a higher concentration of crocin. Its crocin content – which gives the saffron its darker colour and medicinal value – is 8.72% as compared to the Iranian variety which contains 6.82%.
According to the 2011 census, approximately 11,000 women in the Kashmir valley work in the saffron farming sector, nearly 50% of the workforce for this crop.

Their role is key in separating the delicate saffron thread from the flower. Each thread consists of three strands and each one must be picked from the flower properly. The threads are then dried in the sunlight, another tricky step, as they need to be spread evenly at a certain thickness on a white sheet. The strands are then preserved in a cotton cloth so air can continuously pass through to avoid accumulation of moisture and rot. 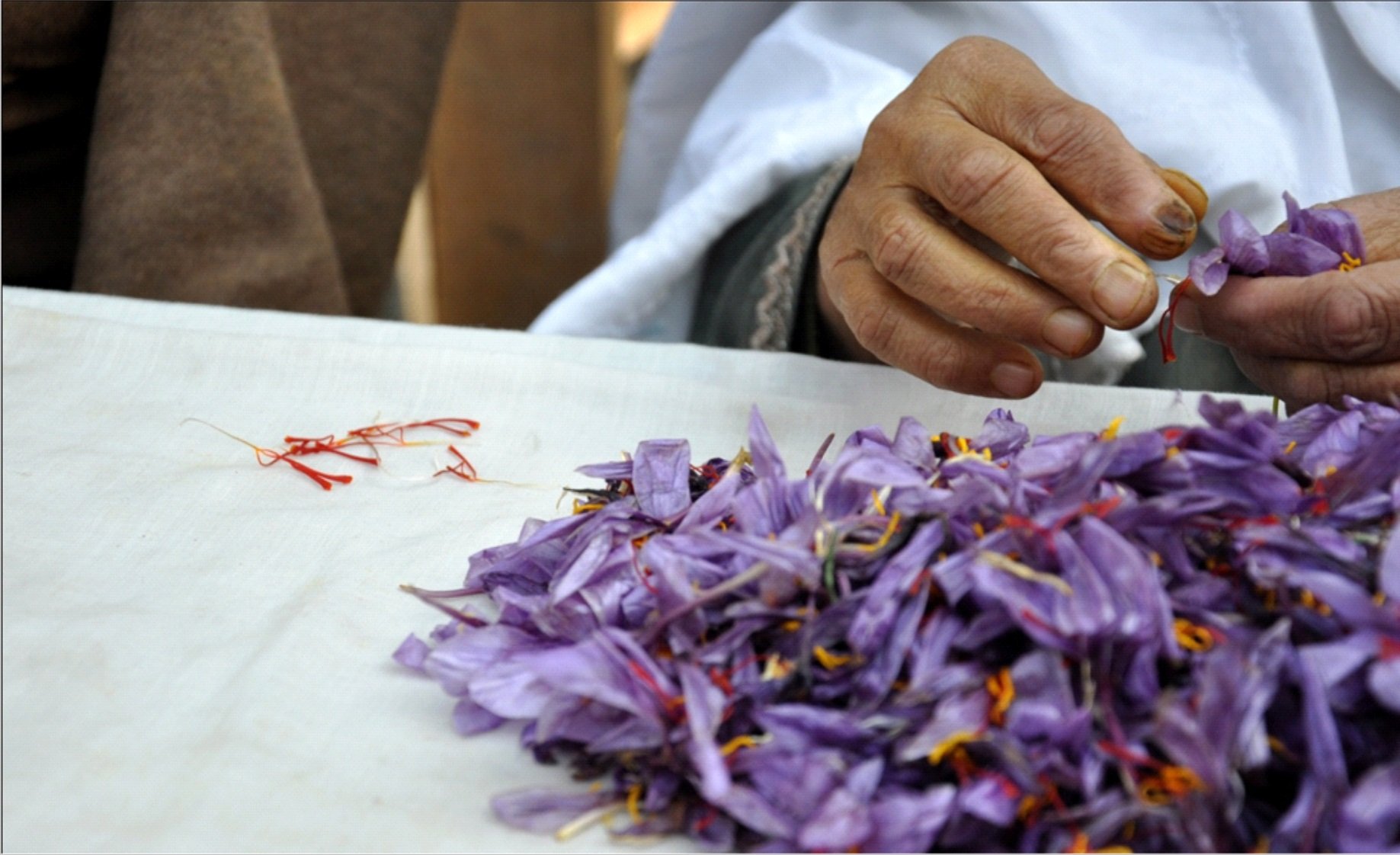 Azie Bano separating the saffron threads from the flowers [image by: Safina Nabi]

This entire process is done by women farmers.

Jan and scores of other families have grown saffron for the past eight or nine decades and the income from the crop has been significant in helping with big investments like building a house or the wedding of children. But a decline in production as a result of climate change has halted these expenses, with farmers losing hope that the produce will increase.

Read: Saffron crop fails in Kashmir due to drought

Knocked by change in climate, poor irrigation, and imports of the cheaper Iranian variety, saffron production in the valley has declined rapidly. According to the Department of Agriculture Kashmir, the production of Kashmiri saffron has declined by 65% over the past two decades from 16 metric tonnes to 5.6 metric tonnes.

In the past 10 years, the low yield has become a deterrent for farmers and many of them have already shifted to other high yielding crops like apples and walnuts. 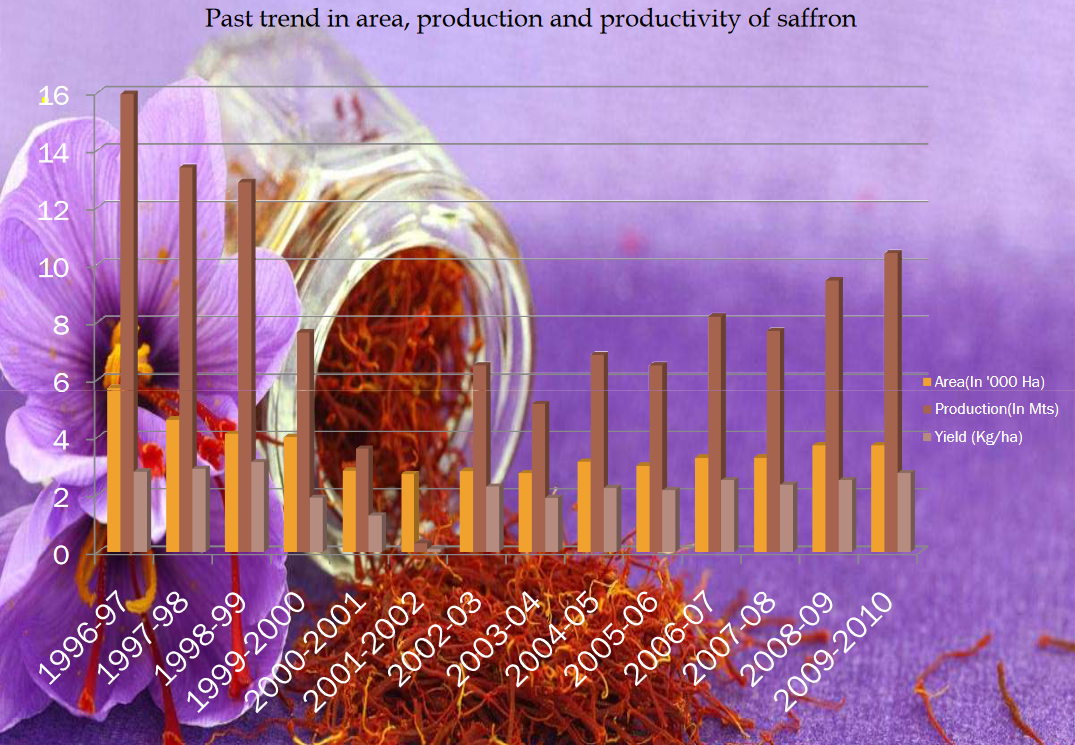 Data from the Department of Agriculture, Kashmir, government of Jammu and Kashmir

Mubeena Akhter, who lives in the nearby area of Nambalabal in Pampore, said that 20 years ago it would take her entire family months to complete the process.

“The entire winter we would separate the stigma [the part on which pollen accumulates] from flowers and the house would always remain filled with saffron fragrance and my palms would turn golden from working with it. This was purely because the produce was so good that it would take us time to pluck and package, so we would keep the work for winters,” said Mubeena.

To address the challenges faced by a climate change-hit sector, the J&K government took several steps.

In 2007, the Saffron Act was introduced, which barred the conversion of saffron farms to commercial plots and levied a penalty of INR 10,000 (USD 135) and one year’s imprisonment on violators. The act dissuaded the land mafia in the area who had started to buy land in bulk and build houses on it.

In 2010, the INR 400-crore (USD 54 million) National Saffron Mission was set up to restore the sector. The goals were diverse; from providing irrigation through sprinklers and taps, increasing the quality of the seed sown for crops, conducting research to enhance productivity, and educating farmers about new methods of farming. 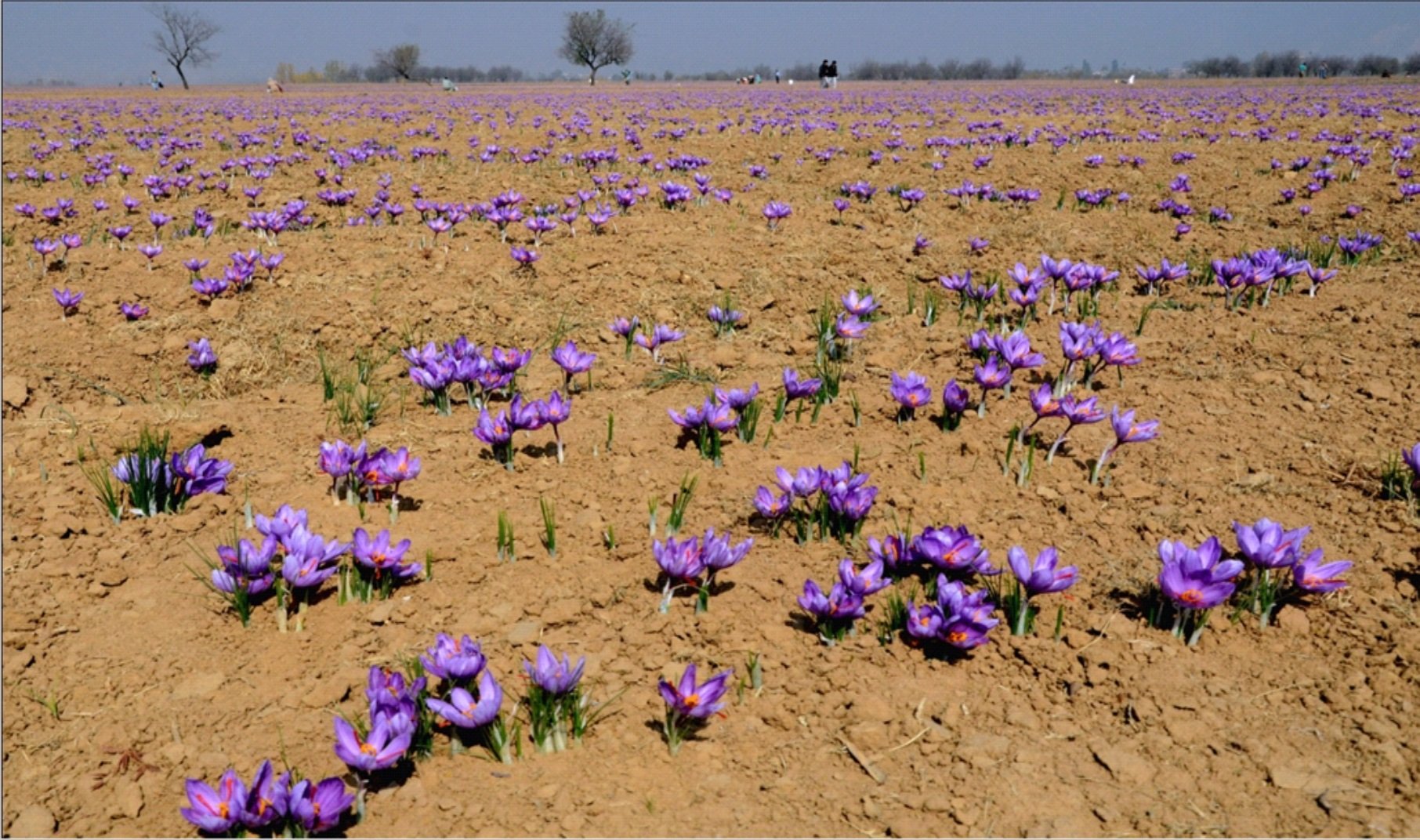 Unfortunately the mission has not helped increase the yield as it has failed to fulfil its targets and already missed two deadlines (2014 and 2019).

“The saffron mission hardly helped the crop to grow because the focus of the department is only digging bore wells and installation of sprinkles without installing power transformers or a regular electricity supply,” said Mohammad Yousuf Wani, the vice-president of the valley’s Saffron Growers Association.

He added: “The government installed diesel motors, [but] the diesel cost is to be borne by the farmers. That cost is too high, [more] than the production itself.”

Altaf Aijaz Andrabi, the director of the Department of Agriculture, said that the department faced issues due to various “unavoidable conditions”, such as the non-availability of labour and a sudden lockdown due to the Covid-19 pandemic which resulted in a delay.

“Out of the total land available for cultivation, we have already connected 33% to the irrigation scheme and for the remaining 66% the basic infrastructure has been developed. The work will be completed by 2020,” he told The Third Pole.

Promises of the GI tag

In May this year, Kashmiri saffron was given a Geographical Indication (GI) tag by the geographical indications registry. The request was filed by the Directorate of Agriculture, Government of Jammu and Kashmir, and facilitated by the Sher-e-Kashmir University of Agriculture Sciences and Technology, Kashmir, and Saffron Research Station, Dussu (Pampore) with the aim to make it illegal for someone outside the valley to make and sell a similar product under the ‘Kashmiri saffron’ name.

According to Article 22 (I) of the World Trade Organisation (WTO) Agreement on Trade-Related Aspects of Intellectual Property Rights Agreement (TRIPS), GI tags are “indications which identify a product as originating in that territory, where a given quality, reputation or characteristic of the product is essentially attributable to its geographic origin.”

“The GI tag will help Kashmiri saffron regain popularity and will change the price. It will also add authenticity and farmers will be economically benefited. This will also shrink the space for those who do adulteration or rebrand Iranian saffron as Kashmiri,” said Andrabi. 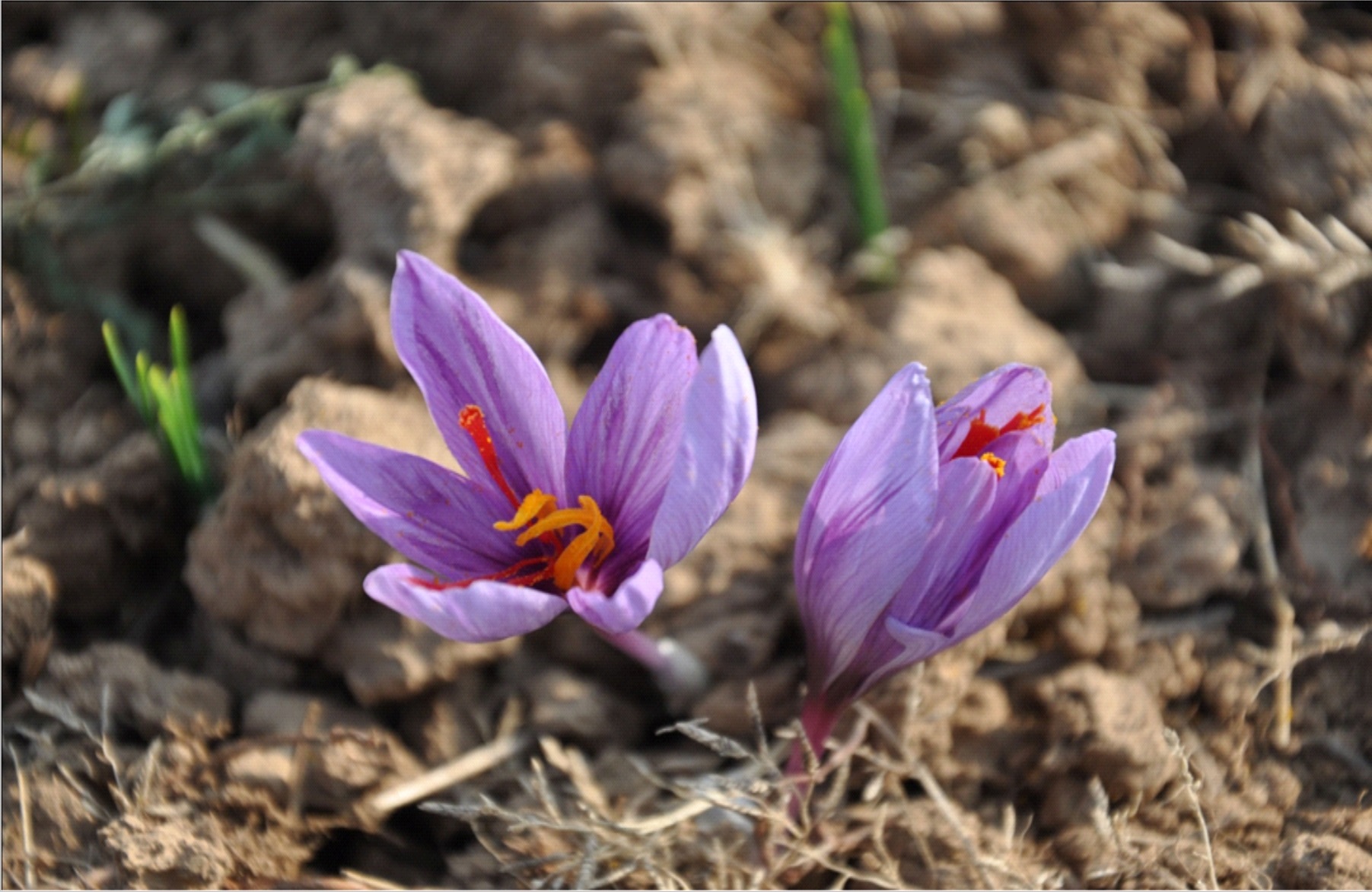 Another challenge facing saffron production is poor adherence to the practice of changing its corms or seeds.
“In Kashmir, growers sow 225,000 corms per hectare, while science suggests it should be 500,000,” said Bashir Ahmad Illahi, a saffron expert at the Sher-i-Kashmir Agricultural University of Science and Technology (SKAUST).

“After every four-year cycle, farmers should change the seeds. But [here] they change the corms after every 30 years which results not just in poor crop production but lets the seed divide and decrease in size after fermentation. This can result in the degradation of quality,” he added.
As these efforts to revive the once-thriving heritage crop show little promise, women cultivators like Jan put their faith in the Almighty instead of the government.

Like other women in her family, Jan believes that the land produces the unique quality saffron because of the blessings of two famous Sufi saints Khawaja Masood Wali and Sheikh Sharifudin Wali who visited Kashmir in the 12th century and blessed the land.
For saffron, a crop which is dependent on moisture for a good yield, irrigation is essential.

“We had a good snowfall in the month of November in 2019 and also a good spell of rain in the first week of September this year. I believe something good has happened, and believe in the Almighty’s blessing for a good crop this year,” said Andrabi, who too is looking to divine blessings for a good yield.

Death comes before justice for Koshi flood victims in Nepal