The Najafgarh wetland in New Delhi and the Basai wetland in Haryana are important destinations within the Central Asian Flyway (CAF), one of the major migration routes for birds flying from Central Asia, Europe, Tibet, China and Russia to the Indian subcontinent during the winter. In fact, India – where wetlands (other than rivers) occupy about 10 million hectares – provides critical stopover sites to over 90% of the bird species known to use CAF migratory routes. 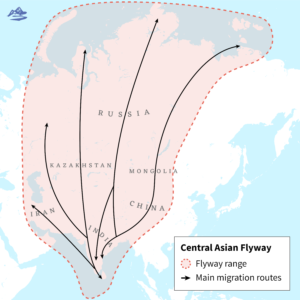 But these wetlands – which support biodiversity, recharge groundwater and provide crucial carbon sequestration services in this climate change era – are under serious threat from pollution and encroachment.

“In urban areas, wetlands also filter waste water and help in reducing pollution load in water bodies – this is a nature-based solution for treating certain types of waste water,” Jagdish Krishnaswamy, senior fellow at the Suri Sehgal Centre for Biodiversity and Conservation, Ashoka Trust for Research in Ecology and the Environment (ATREE), told The Third Pole.

A major impediment to mitigating such threats is the fact that many important wetlands in India, including Najafgarh and Basai, are not formally recognised as wetlands under the Wetlands (Conservation and Management) Rules, 2017 [Wetland Rules] despite both the wetlands hosting rich bird diversity.

Basai is an Important Bird Area (IBA), an area identified using an internationally agreed set of criteria as being globally important for the conservation of bird populations. The criteria is largely based on whether the area hosts endangered species and large congregations. According to estimates by the Bombay Natural History Society (BNHS), the Basai wetland is home to more than 20,000 birds of about 280 different species.

As for Najafgarh, though it isn’t recognised as an IBA, it is home to more than 281 species – migratory and resident. Threatened species found in the wetland include Egyptian vulture, Sarus Crane, Steppe Eagle, Greater Spotted Eagle, Indian Spotted Eagle and Imperial Eagle.  It’s important to note that it’s not just water birds that migrate to India using CAF. So, while Greater Flamingos from Kazakhstan come to the shores of Gujarat and White-tailed Lapwings from Russia come to Delhi using CAF, raptors like Steppe Eagles from the steppes in Kyrgyzstan and Kazakhstan also winter in Delhi.

A September 2020 paper also showed how Black-eared kites that spend winters around Delhi, including in Najafgarh, migrate for 3,300-4,800 kms, crossing the Himalayas at extremely high elevations (about  6,500 m above sea level). Migratory species that use CAF therefore undertake long, arduous journeys. And with climate change already disrupting migration patterns, wetland conservation is an even greater priority.

Najafgarh needs prioritisation because “it is stinky and beautiful and neglected but is full of birds because it is a mosaic of shallow and deeper wetland, interspersed with some grassy patches” said Neha Sinha, a conservation biologist with BNHS.

“Sewage from the Badshahpur drain and villages flows into the wetland. There is an urgent need to conduct water quality testing, and to treat the water… many of these birds might have high levels of toxins in their bodies,” she added.

The Najafgarh wetland is formed by the Sahibi river that flows through Haryana and Delhi. On the Haryana side, the Najafgarh basin is threatened by rampant encroachment (also called ‘wetland reclamation’).

Similarly, the Basai wetland is also slowly being encroached by a construction and demolition waste plant.

“If you don’t officially notify wetlands, water gets drained and the land gets used,” Sinha pointed out. She stressed that the survival of wetlands depends on maintaining the ‘ecological character’ of the wetland – which is the maintenance of water sources, aquatic vegetation, and the zone of influence of the wetland, which includes the shores.

Wetland Rules only apply to wetlands that are categorised as ‘wetlands of international importance’ under the Ramsar Convention or are notified by the Central, State or Union Territory (UT) administration as wetlands. The rules restrict conversion for non-wetland uses including encroachment, solid waste dumping, discharge of untreated waste and so on.

Another issue that arises out of non-recognition is unthinking conservation practices. For instance, Sinha pointed out, when a black-necked stork was seen with its beak trapped shut by a piece of plastic in Basai and was rescued by the forest department, it was released not back into Basai but into Sultanpur National Park because the forest department recognises only protected areas like Sultanpur National Park as administrative units.

But there is hope.

The National Green Tribunal (NGT) issued an order this August directing the National Wetlands Committee to compile data on the status of compliance of environmental norms in all the significant wetlands of India to ensure remedial action.

In accordance with this order, State Pollution Control Boards/ Pollution Control Committees and state/ Union Territory (UT) wetland authorities were ordered to provide the status of wetland management in their respective states/UTs to the secretary, Union Ministry of Environment, Forest and Climate Change by November 30 this year.

Sinha said that there seems to be a “reluctance in notifying [wetland] areas which would lead to restrictions in construction activities.” She also spoke of “general lethargy”. The People’s Biodiversity Register – a document of fauna and flora and associated knowledge in India – was prepared only after NGT issued a notice despite the existence of the Biological Diversity Act, 2002.

“This [NGT order] is a very good opportunity for states to conserve their wetlands,” said S. Subramanya, former faculty, University of Agricultural Science, Bangalore. “We don’t have a complete national database on the country’s wetlands [as of now] but once this exercise is done, it will give legal currency to fight for the cause of wetlands.”

In undertaking such wetland recognition activities, though, Subramanya pointed to a need “to recognise wetlands outside cities”. He noted that birdwatching has largely been an urban phenomenon in India and in this process, wetlands in rural areas and large reservoirs have not been given their due.

Krishnaswamy of ATREE pointed out that areas around wetlands – and not merely the wetland itself – need to be protected to maintain catchment integrity.

“Just like we have eco-sensitive zones around protected areas [wildlife sanctuaries, national parks etc.], we need to have eco-sensitive zones for wetlands also where certain kinds of land-use is discouraged,” Krishnaswamy said, adding that this is especially relevant for urban and peri-urban wetlands that are under encroachment threat due to construction activities.