“The voice of the chirping jejjeel fills our hearts with joy. It is as dear to the locals of this region as our own children,” says Mastan Khan, a teacher and environmental activist in Kohistan, in northwest Pakistan’s Khyber-Pakhtunkhwa province. Khan is involved in local initiatives in the Palas Valley to protect the jejjeel, or western tragopan, a rare and beautiful pheasant species native only to the western Himalayas.

The Palas Valley boasts pristine forests and – due to minimal human intervention in some areas of the valley – many rare species of wildlife. According to the World Pheasant Association, the valley is believed to be home to at least 300 pairs of western tragopan, one of the largest populations in the world.

With its electric blue throat, crimson breast and body adorned with bright white spots, the species is high on the wish-lists of bird enthusiasts living in or visiting the region, but even they rarely spot them, and the species is rarely photographed. A shy and evasive species, it generally stays away from human beings, and is usually sighted in only the early morning and late evenings. 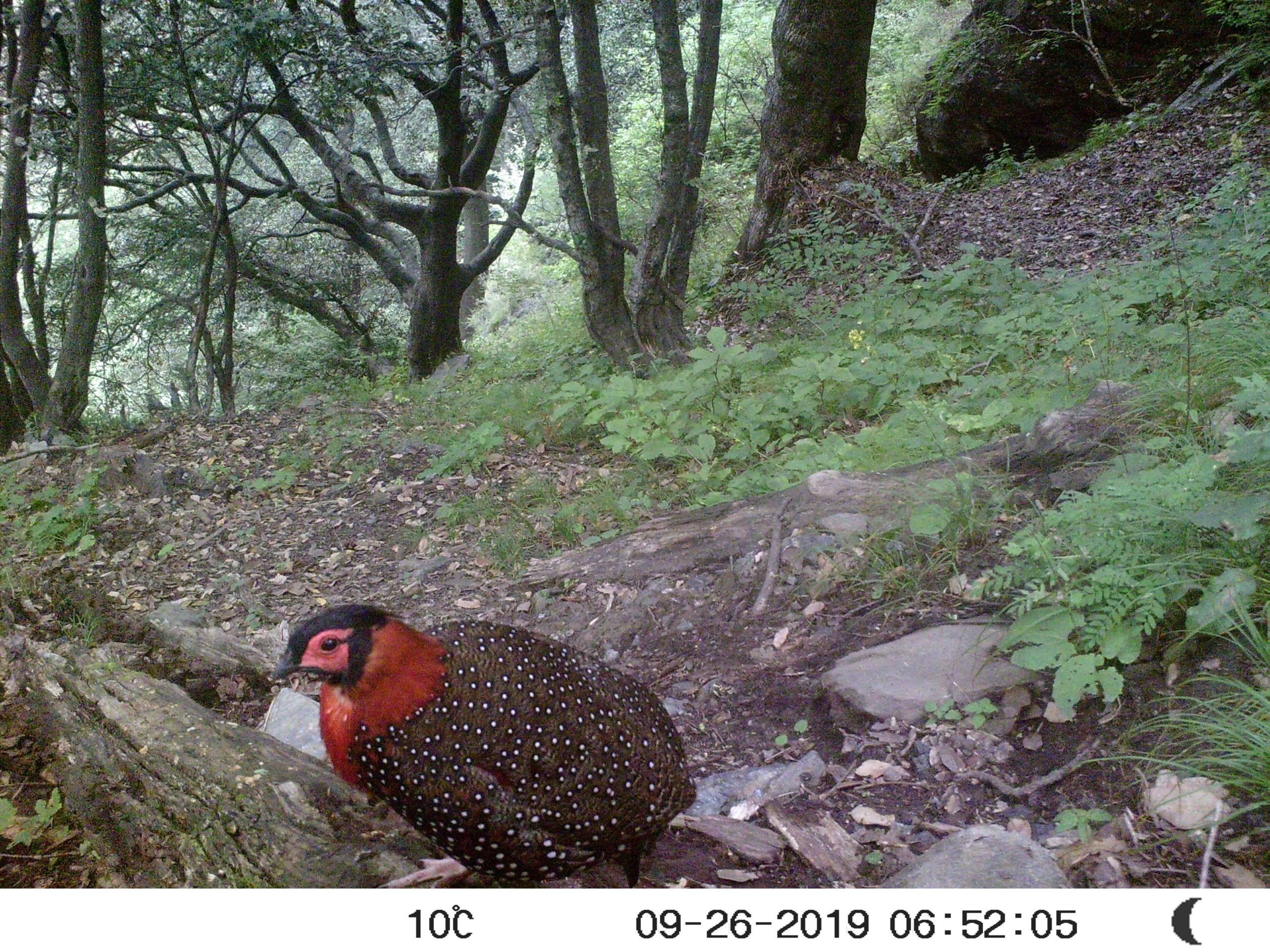 The International Union for Conservation of Nature (IUCN) estimates that 3,300 mature individuals of western tragopan survive in the scattered populations from Kohistan to Uttarakhand in India. Numbers are steadily declining, and it is categorised as vulnerable to extinction.

“Since the construction of dams in Kohistan, we are apprehensive about this bird’s survival,” Khan tells The Third Pole.

Mastan’s fears refer to the construction of the Dasu and Diamer Bhasha hydropower projects, through which the country hopes to end reliance on fossil fuels and increase energy capacity. The Dasu project is financed by the World Bank and is currently being built by Chinese construction giant the Gezhouba Group. The site lies in the mountainous terrain of the upper Indus valley in Kohistan district, and the project involves construction of the main dam, a powerhouse and a transmission line.

According to the Water and Power Development Authority’s (WAPDA) Environmental and Social Assessment report on the Dasu Hydropower project from 2014, the initially proposed transmission line would pass through the Palas Valley.

Faiq Khan, the district forest officer (DFO) for Kohistan, also told The Third Pole that the tragopan could be threatened by construction of transmission lines, as “cables can result in the unnatural death of this beautiful and vulnerable bird as a result of collisions”.

The main transmission line from Dasu to the national grid is being constructed by the National Transmission and Despatch Company (NTDC), an autonomous power transmission company under Pakistan’s Ministry of Energy. In a statement shared with The Third Pole, the NTDC maintains that a tentative alignment of transmission lines from Dasu to Pathar Garh near Islamabad was proposed, which would have passed through the Palas Valley and the habitat of the western tragopan, but that this alignment was later changed.

According to the NTDC, the new route has been selected “as per the standard international requirements” and does not pass through the Palas Valley. “Although the latest Dasu Transmission Line (DTL) does not pass through any environmentally sensitive area, the Environmental and Social Assessment (ESA) report of DTL enlisted several mitigation measures including the installation of bird markers [deterrents] near the bird’s hotspots. This will help birds identify the presence of the transmission line and can save them from collision,” stated the NTDC’s response to The Third Pole.

If settlements are disturbed by the construction of the dam and locals move to the highland to construct their homes, it may threaten the species habitat

Muhammad Naeem Awan, a supervisor at the National Park Management Office and a field officer with the IUCN in Azad Jammu and Kashmir, has been researching pheasants for two decades, and recently completed a PhD on ecology and conservation of the western tragopan in Pakistan. In an email interview with The Third Pole, Awan said that dam construction may still pose indirect threats to the vulnerable bird.

“The species is found in high mountain areas and the dam is far away from that area. But if settlements are disturbed by the construction of the dam and locals move to the highland to construct their homes, it may threaten the species’ habitat. This was already observed in the Jagran valley, where major agricultural land went under a dam and people moved to the highlands for rehabilitation of their houses and agriculture, along with livestock, damaging habitat of the species [the western tragopan].”

The IUCN lists the main threats to the species as habitat degradation, disturbance and hunting. “Beside these there are some other emerging threats like plastic pollution,” says Awan. “Nomads and locals move to alpine pastures and mostly use plastic bags for carrying their food … which not only pollute the forest but also pose a threat to the tragopan and other wild animals.”

According to DFO Faiq Khan, the protection of the western tragopan is one of the department’s top priorities. “Its hunting is strictly prohibited. The local community also supports us. But it is true that the western tragopan may be at risk from growing populations, deforestation, development work and climate change,” says Faiq.

Unknowns standing in the way of conservation

Faiq Khan, the DFO for Kohistan, told The Third Pole that there has been no recent scientific survey of the western tragopan population in this region, “but according to our observations, there are more than five hundred pairs of western tragopan in the Valley”.

There is also no recent count of the global population, with the current IUCN figure of 3,300 mature individuals based on studies from 1981 and 1995. “Recent reports of additional populations in Azad Jammu and Kashmir, Pakistan and Himachal Pradesh may lead to an increase in the estimated global population size in the future, although conversely it has been suggested that the world population in the wild has been reduced to 2,500-3,500 individuals, prompting the need for wider surveys,” the IUCN assessment says.

According to Awan’s research on the pheasant, the western tragopan is found in Pakistan’s Palas Valley, Kaghan valley and Azad Jammu and Kashmir. During the breeding season from April to June, he says tragopans prefer little-disturbed mixed coniferous mountain forests at about 2,400 to 3,600 metres, on steep, exposed forested slopes.

Spotting the elusive bird in the wild, especially during the breeding season, is a “near miracle”, says Awan. For this reason, scientists rely on a ‘call count’ method to survey the species. Only male birds call in the breeding season, so the population is estimated by doubling the calling birds recorded, assuming one male tragopan will be accompanied by one female.

In November 2021, Awan and a team of other researchers published new research. They claim this “provides the first comprehensive overview of the Western Tragopan’s available breeding habitat within Pakistan” and identified new areas of highly suitable habitat where the species is predicted to occur.

We believe that the identity of the Palas in this world is connected with the jejjeel. But the people of the Palas Valley cannot protect it single handedly

The paper highlights the need for quantifying the tragopan’s geographic range, and says this new knowledge is of high conservation value. “Without information about habitat use by the species, or its distribution, one would be unable to think about how to protect it,” Awan says.

Faiq Khan told The Third Pole that the wildlife department sent a recommendation to the government several years ago to declare Palas Valley a protected area. “We hope that the official notice will be issued soon,” says Faiq.

For the time being, local people are taking the lead. In order to safeguard their favourite bird, Palas tribes begun holding jirgas (tribal councils) towards this goal in 2009 and banned the hunting of the tragopan, says Mastan. “If we find anyone involved in hunting it, we boycott them. We believe that the identity of the Palas in this world is connected with the jejjeel. But the people of the Palas Valley cannot protect it single handedly. The government and civil society have to move forward as well, and we will fully cooperate with them.”

Markhor struggling to survive in Kashmir