Mountains, pristine rivers and lush green forests characterise Nepal’s Dolpa district. Concealed between the foothills of the majestic Himalayas and bordering Tibet to the north and northeast, Dolpa is home to Shey-Phoksundo National Park (SPNP), Nepal’s largest national park. Here, one can find diverse and enigmatic wildlife such as the red panda, Himalayan wolf, blue sheep, Himalayan musk deer, and Himalayan tahr. It is also the haunt of the elusive snow leopard.

I had the privilege of joining Shey-Phoksundo National Park as an intern in February 2021. At the time, the national park was preparing to undertake a telemetry expedition in Nisyal, Dolpa, involving placing radio collars on snow leopards. The aim of the mission was to gather data on the animals’ movements, which could tell scientists about their habitat preferences and travels across international borders, as well as to help prevent attacks on livestock. The programme was also designed to involve local people at every stage, including by training a committee of locals during the expedition who could help monitor the animals after they were collared.

The collaring expedition was led by the Government of Nepal in partnership with WWF Nepal, National Trust for Nature Conservation (NTNC) and members of the Nisyal Snow Leopard Conservation Committee (SLCC), made up of local people who work on awareness campaigns, snow leopard monitoring and compensation schemes for livestock lost to snow leopards.

What is a telemetry expedition?

Telemetry is the science of collecting data from remote objects.

In the case of telemetry studies of snow leopards in Nepal, this data is derived from collars that have been attached to the animals, which transmit location data to researchers remotely.

The team was supposed to be joined by personnel from the Ministry of Forests and Environment, but just before the expedition launch, the ministry relayed that their staff couldn’t make it due to difficulties brought about by the pandemic. The situation presented a golden opportunity for me to join the team along with three members of park staff.

The long journey to Nisyal

On 1 May we set off from Dunai, the headquarters of Dolpa district. Our team comprised 24 members, including officers from WWF Nepal, NTNC and the SLCC citizen scientists. More than 30 mules carried luggage and equipment on their backs as we marched towards our destination, Nisyal – a seven-day trek away – where the team intended to find, tranquilise and collar two snow leopards.

Navigating the rugged terrain and snowy mountain passes through the trek to Nisyal was a whole new challenge for me, having come from the plains of the Terai to this unfamiliar and unforgivingly rugged terrain. During the night, the temperature crept down to single digits and it started to snow, making our tents heavy and wet. I remember shivering in lieu of sleeping. But the journey was rewarding as with every passing day, it took us one step closer to our destination. 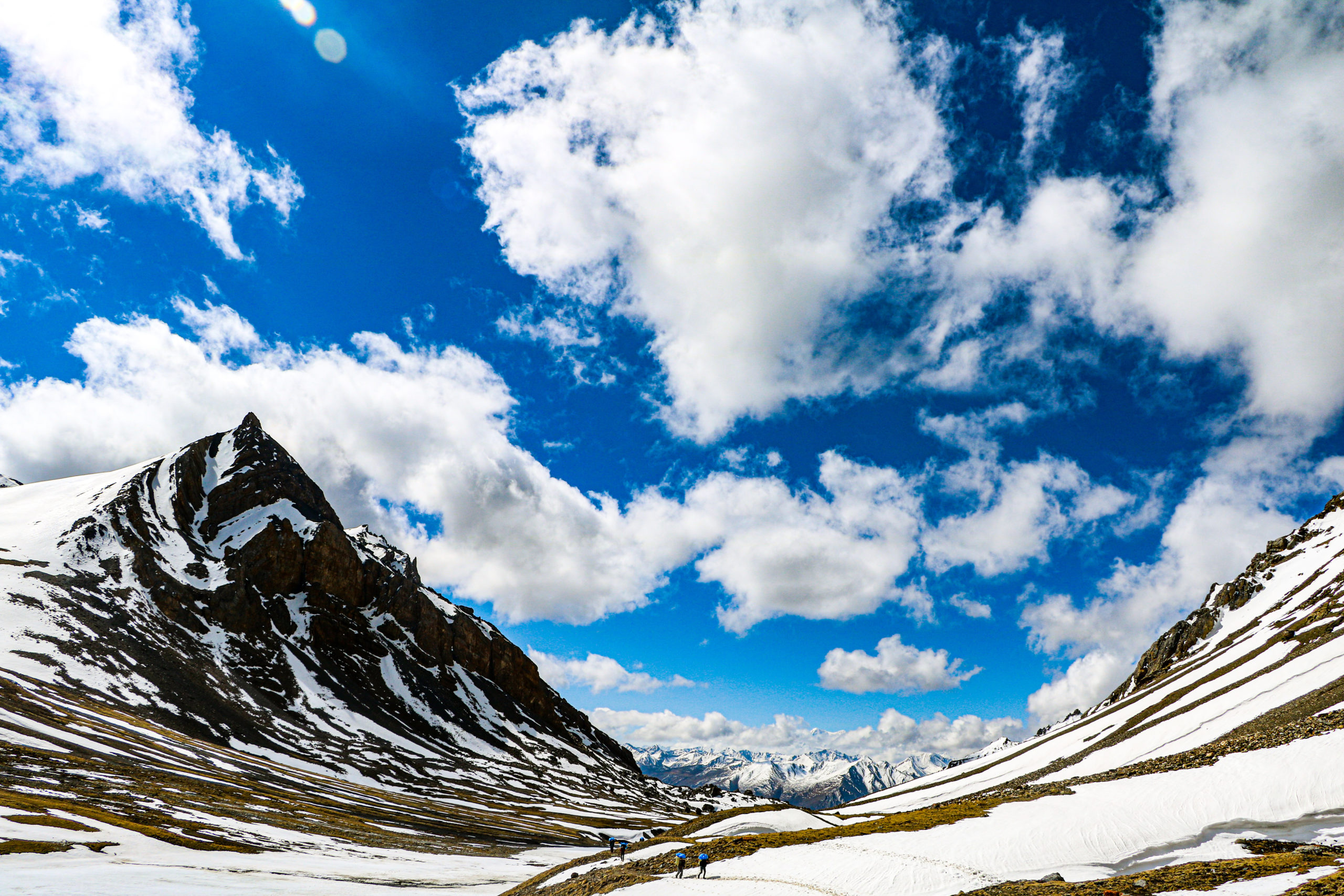 Setting up the traps

A week after setting off from Dunai, we reached Nisyal, a small village of 38 households. The scientists started by collecting data from camera traps that had been installed a year ahead of the expedition. The pictures and videos from the cameras were studied to determine the trails used by the snow leopards, focusing on ‘relic sites’ where the animals urinate and scrape to mark their territory.

In order to capture and tranquilise the snow leopards, we would be using traps made of rope attached to a trigger, designed to trap a paw without harming the animal. A quick briefing session on how to set up and use the trap and the procedure for safe collaring of the animals was given by Samundra Subba, field research officer at WWF Nepal. A radio tower was then installed at a high point to receive signals from the traps and relay them to base camp. 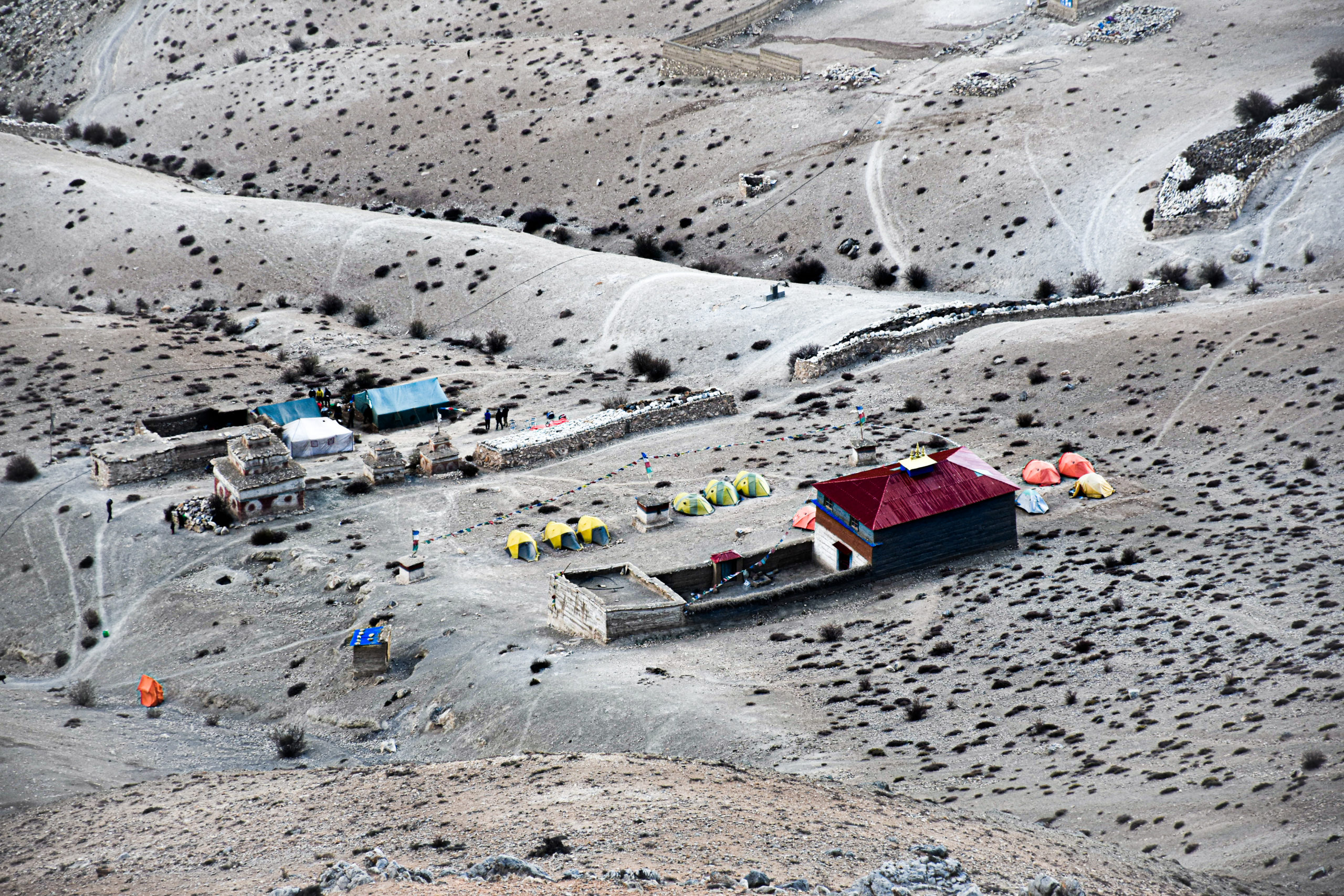 The main base camp at Nisyal (Image: DNPWC / WWF Nepal)

We had to find signs that showed evidence of snow leopards to know exactly where to lay the traps – this was no walk in the park. We were constantly on the lookout for pugmarks, scrape marks, or a strong urine odour that would indicate the presence of a snow leopard.

The team eventually set up a total of 23 traps in different locations, based on the camera traps and signs and after considerable discussion with the members of the local Snow Leopard Conservation Committee. A transmitter was attached to every trap to send signals to the main camp via a radio tower to report if something was captured.

We informed local people of the location of the traps, and persuaded them not to go to those places for a few days to decrease the chances of false alarms. In any expedition, there is no absolute certainty that a snow leopard will be caught. We did all that we could, and then it was time to wait with hope and patience.

Eyes on the prize 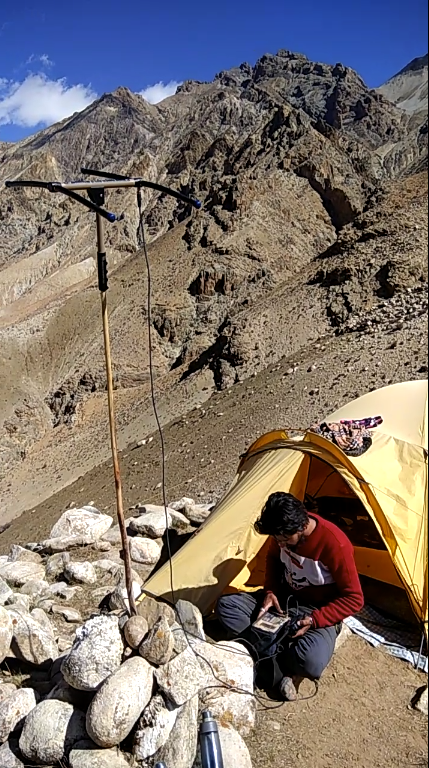 The author checking radio signals transmitted from the traps, to find out whether a snow leopard has been captured (Image: DNPWC / WWF Nepal)

We would check the traps four times a day via the radio signals. After two days, at around 6 AM, the alarm was triggered in the base camp. We looked at the frequency and found that it was from the Rapka region, where we had laid out the trap two days ago.

Some locals, along with park staff, went to verify the trigger ahead of the telemetry team. After about half an hour, good news was relayed on the walkie-talkie: it wasn’t a false alarm – a snow leopard had landed on the trap.

On arrival at the site 10 minutes later, the experts estimated the weight of the cat to prepare a tranquiliser dose. Within 10 minutes of administering the tranquiliser via a dart gun, the snow leopard was sedated. We lugged it onto a stretcher and moved it to a safe site with its face covered, because despite its sedated state, it could still hear and see, which risked it becoming distressed.

A veterinarian checked the snow leopard’s overall health status and measured its body size and weight, while Samundra Subba placed a GPS collar on its neck. The entire process was pre-planned to ensure that the animal would be sedated for shortest possible time. The experts examined the animal and determined it was a male, aged six to seven years. Meanwhile I stood in awe, not being able to believe that I was seeing this beautiful creature with its long bushy tail and paws as big as my face, in the flesh! 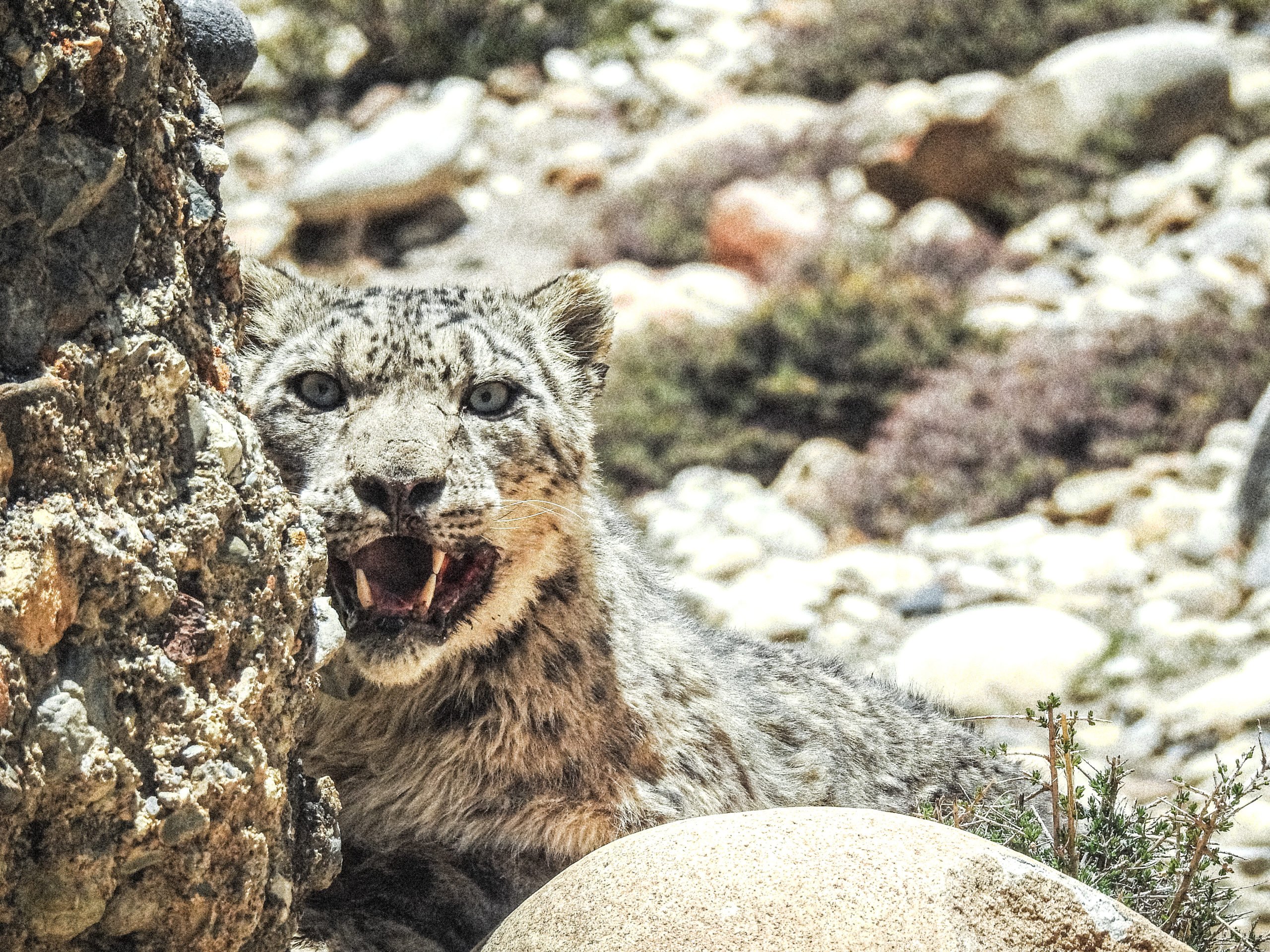 After the collar was attached, the veterinarian administered an antidote and the animal awoke slowly. We all stood in in front of a river as a barrier, to prevent the drowsy snow leopard entering the water, and waited for more than an hour to ensure its safe return to its habitat.

Six days later, another snow leopard was collared. It was a male too, and of the same age. Later, the two collared snow leopards were named by local monks: Ghangri Gapi Hyul (meaning ‘a stunning village surrounded by mountains’ in Tibetan) and Langyen (‘high Himalayas’).

How the expedition can help snow leopards

The information obtained from these collars will be crucial in understanding the spatial ecology of the snow leopard as well as in bridging information gaps in the Western Himalayan landscape. Following the collaring, these snow leopards will be closely monitored by the government and conservation biologists, who will study their use of habitat and movement across borders. Launched in 2013, the programme in Nepal has collared eight snow leopards so far, and the team plan to do expeditions across the snow leopard range in Nepal

Despite conservation efforts from WWF, the Government of Nepal, the National Park, and local communities, retaliatory killing of snow leopards which prey on livestock is still prevalent in and around the region. To minimise this, the construction of safe corrals for livestock, better provision of relief funds, and livestock insurance schemes are in action.

The telemetry study can also help to prevent retaliatory killing: if a collared animals is recorded entering a village boundary, the SLCC group will share the information with the community so that they can protect their livestock.

The conservation efforts required in the Himalayan region cannot be overstated. The challenging geography and remote locations create a harsh working environment. But the collaring expedition was successful because of the dedication of SLCC members and the perception of locals towards conservation. Efforts like these should be continued to protect the snow leopards of the Himalayas and to ensure their survival for many years to come.