A new assessment of the mainland clouded leopard’s conservation status has estimated the global population to be between 3,700 and 5,580 mature individuals. The lower end of this estimate would make the big cat rarer than the tiger, of which 4,000 are estimated to survive in the wild.

The mainland clouded leopard, found from the foothills of the Nepal Himalayas eastwards to southern China and south to Malaysia, is a rarely seen carnivore that spends much of its life in trees. Along with the similar Sunda clouded leopard of Sumatra and Borneo, which was determined to be a separate species in 2006, it is the world’s smallest ‘big cat’.

Assessments for the International Union for Conservation of Nature (IUCN) Red List of Threatened Species aim to assess the change in a species’ conservation status over three generations. The 2021 assessment is the first to look at the mainland clouded leopard since 2016. It found that over the last three generations (around 20-21 years for a big cat) the mainland clouded leopard has declined by more than 30% in both abundance and distribution.

The mainland clouded leopard may be totally extinct in Vietnam, and close to extinction in China and Bangladesh

“The assessment revealed that the mainland clouded leopard remains a threatened species and that it is absent from lots of the forest where it ought to be,” said Tom Gray, tiger recovery lead at WWF and lead author of the assessment. “In places in Myanmar, Cambodia, Vietnam and Laos, that have good habitat and where the species ought to occur, they are absent.”

A recent analysis of habitat and threats across the species’ range found that while still relatively widespread in northeast India, Bhutan, Myanmar, Thailand and Malaysia, the mainland clouded leopard may be totally extinct in Vietnam, and close to extinction in China and Bangladesh.

Challenges of counting an elusive cat

Unlike population figures for tigers in countries like India and Nepal, the estimate for the mainland clouded leopard was not reached by counting individuals. Instead, it was derived from extrapolating data on clouded leopard density in locations across its large Asian range where studies have been carried out. The fact that very little such data has been published, and large variation across its range in terms of habitat and threats, means that coming up with overall estimates of numbers and trends is very challenging. 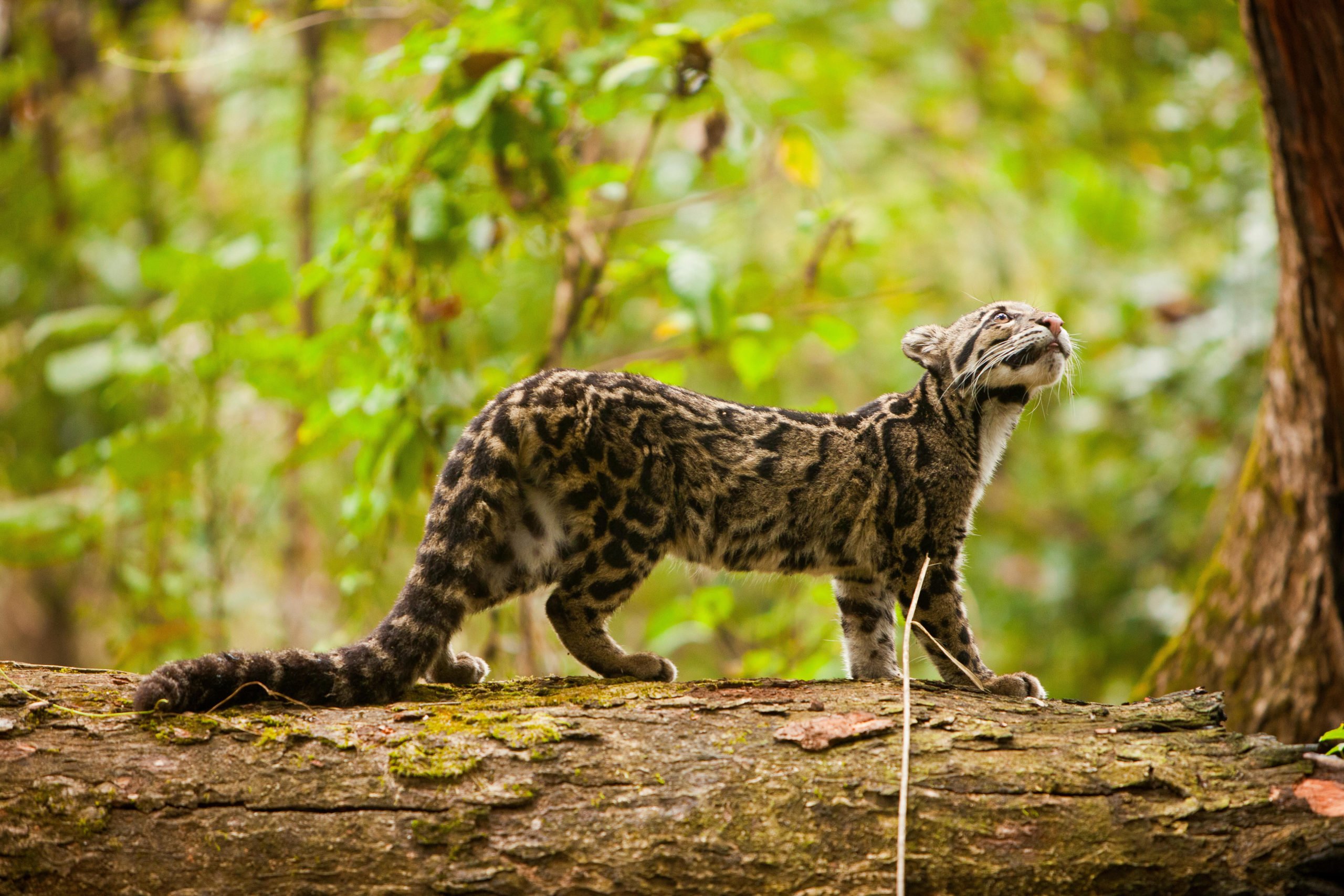 “A lot of it was inference,” said Gray. “What we believe has happened based on habitat loss, trends of hunting, wildlife trade information, the number of snares in the forest.” Gray worked with a team of researchers from every country where the species occurs (with the exception of China) to collate information on clouded leopard density. This was mapped against the species’ known range to estimate the population and trends, taking into account threats like deforestation rate, prevalence of illegal hunting and wildlife trade.

What is a longitudinal study?

Akchousanh Rasphone, conservation science director at the Wildlife Conservation Society in Laos, authored one of the very few longitudinal studies designed to monitor clouded leopard abundance over time. Her research, conducted with camera traps between 2013 and 2017 in a protected area of northern Laos, recorded the presence of individual animals in order to track population trends. Her study found a population in decline.

“Unfortunately it’s so much work and expensive, that you can’t really do that for the whole of Laos,” said Rasphone. Instead, the IUCN assessment’s authors collated data on density estimates for the mainland clouded leopard from non-longitudinal studies.

Even this data can be few and far between. Jimmy Borah, senior manager of the legal and advocacy division at NGO Aaranyak and a co-author of the assessment, explained how in India, most data on clouded leopard densities comes from information captured on camera traps during studies targeted at other species like tigers. “You need a robust number [of records] to estimate density, and such figures for clouded leopards are very rare,” said Borah.

The IUCN assessment paints a picture of a species facing threats to its survival across much of its range, particularly in Southeast Asia. “The biggest threat for the mainland clouded leopard is almost certainly poaching due to snaring, both directly targeted at clouded leopards but also where clouded leopards are caught as bycatch,” Gray told The Third Pole. 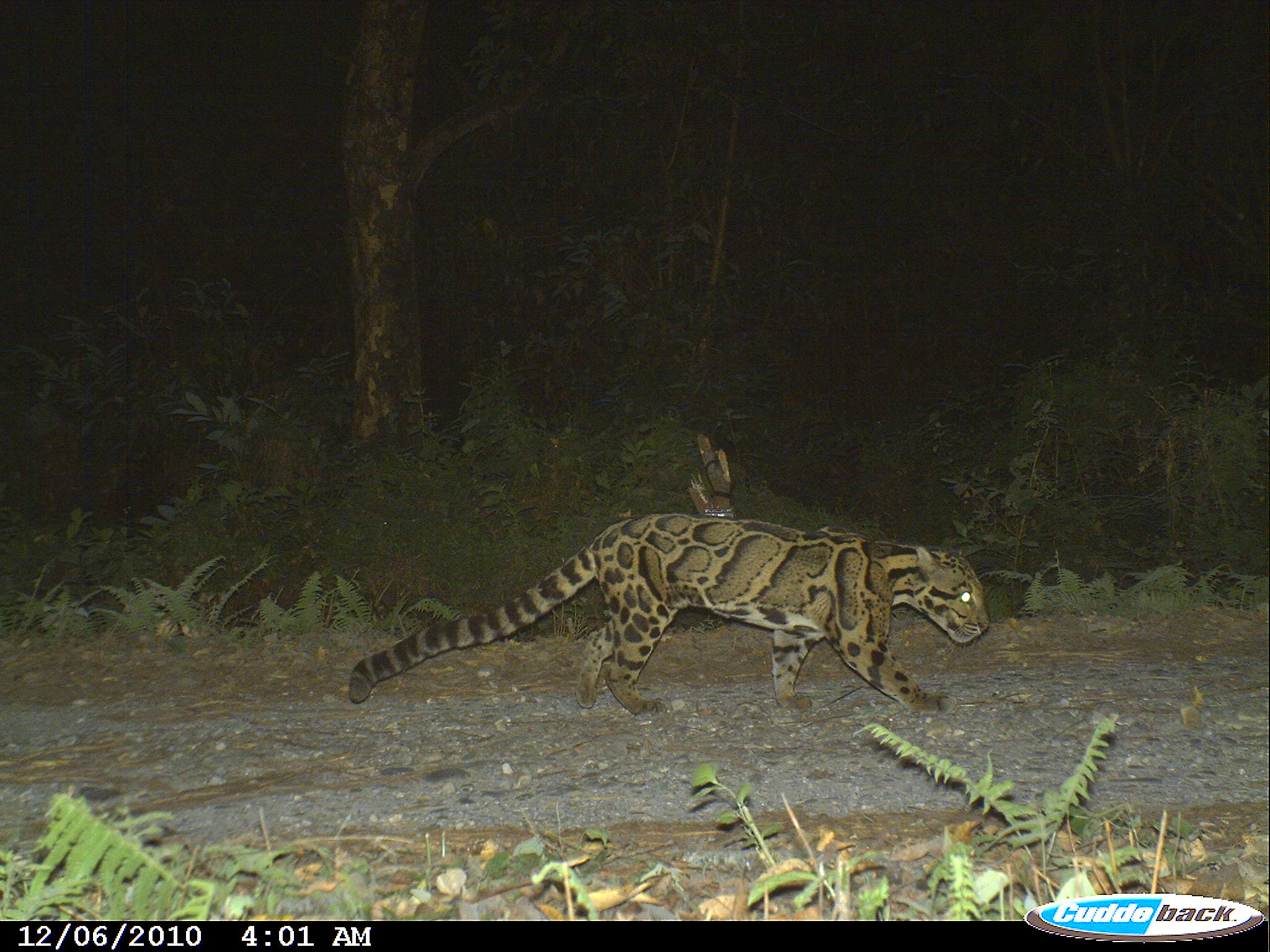 Snares – simple wire traps laid in forests that capture any animal that walks through them – are a major factor behind a collapse in large animal numbers across much of Southeast Asia. “Snaring is a great threat in Southeast Asia overall,” said Rasphone. “It’s so easy to set out, it’s cheap, and it doesn’t discriminate between species.”

Once caught – whether from targeted hunting or bycatch – clouded leopard body parts frequently enter the illegal wildlife trade. While international trade in clouded leopard parts is banned under the Convention on International Trade in Endangered Species of Wild Fauna and Flora (CITES), observations of illegal wildlife markets along the Myanmar-China and Myanmar-Thailand borders have found the species to be the big cat species most frequently offered for sale.

In an email to The Third Pole, Sapai Min, founder of the NGO Wildlife and Ecosystem Conservation Action Nationwide (WECAN) Myanmar and author of several studies of wildlife trade including big cats in Myanmar, said that the trade is “still active in border markets”, according to surveys shortly before the Covid-19 pandemic. “Clouded leopard skins are the most traded parts, followed by their skulls and canine respectively, mainly used for decoration purposes,” she explained. 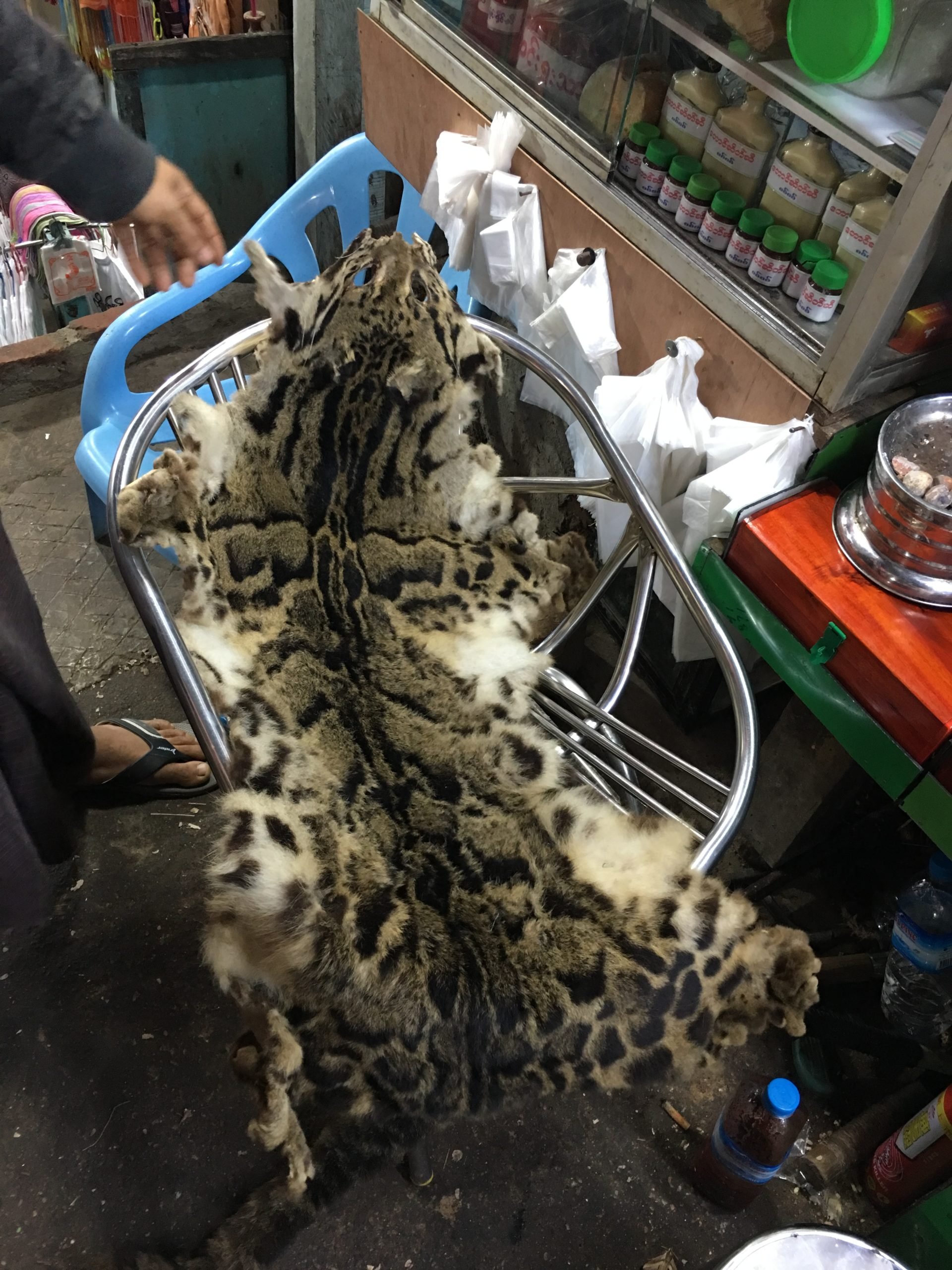 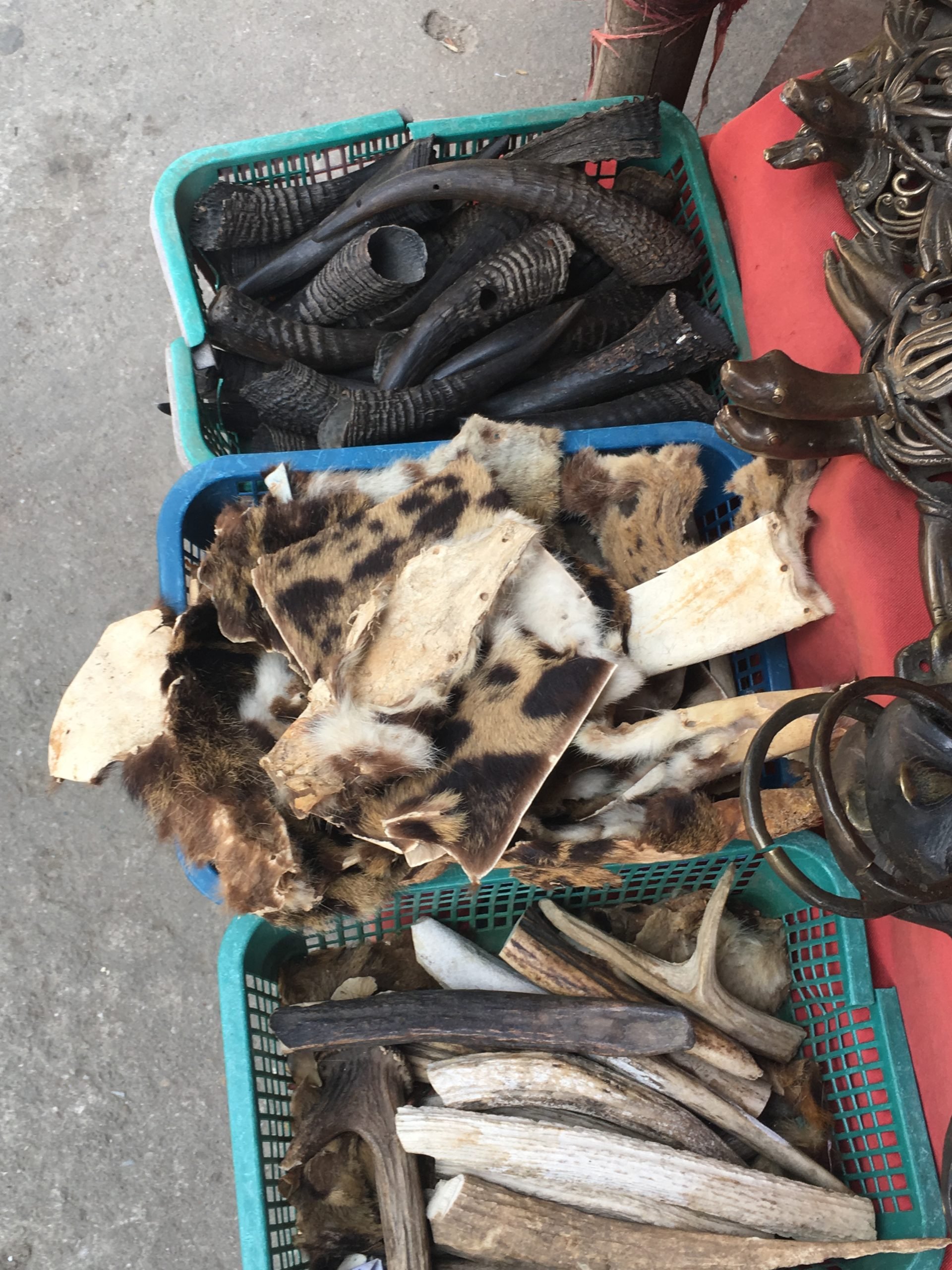 Clouded leopard skin pieces among other wildlife items on sale in Tachilek market on the Myanmar-Thailand border (Image: Sapai Min-WECAN)

While their skins are distinctive, clouded leopard bones and teeth may be passed off as tiger, a species in high demand for ornamental use and in traditional Chinese medicine. Borah recalled such cases from his research on wildlife trafficking around Manas, Assam in 2018. “The authorities captured an offender red-handed – they were trying to sell the teeth and bones as tiger,” said Borah.

As habitat loss and local extinctions increasingly fragment populations of the big cat, lack of genetic diversity also poses a threat to its long-term survival. “Although arguably not as urgent as poaching, inbreeding is an issue the conservation community in the region will have to eventually address,” said Wyatt Petersen, another co-author of the assessment. At least one clouded leopard has been photographed in Thailand’s Khao Yai National Park with an abnormal kink in its tail, a trait that has been linked to inbreeding in other big cats like Florida panthers.

“In the Florida panthers, those with kinked tails also had heart defects, weakened immune systems and fertility issues, reducing overall reproductive fitness and chance of survival. Whether the same holds true for clouded leopards remains to be seen,” said Petersen. 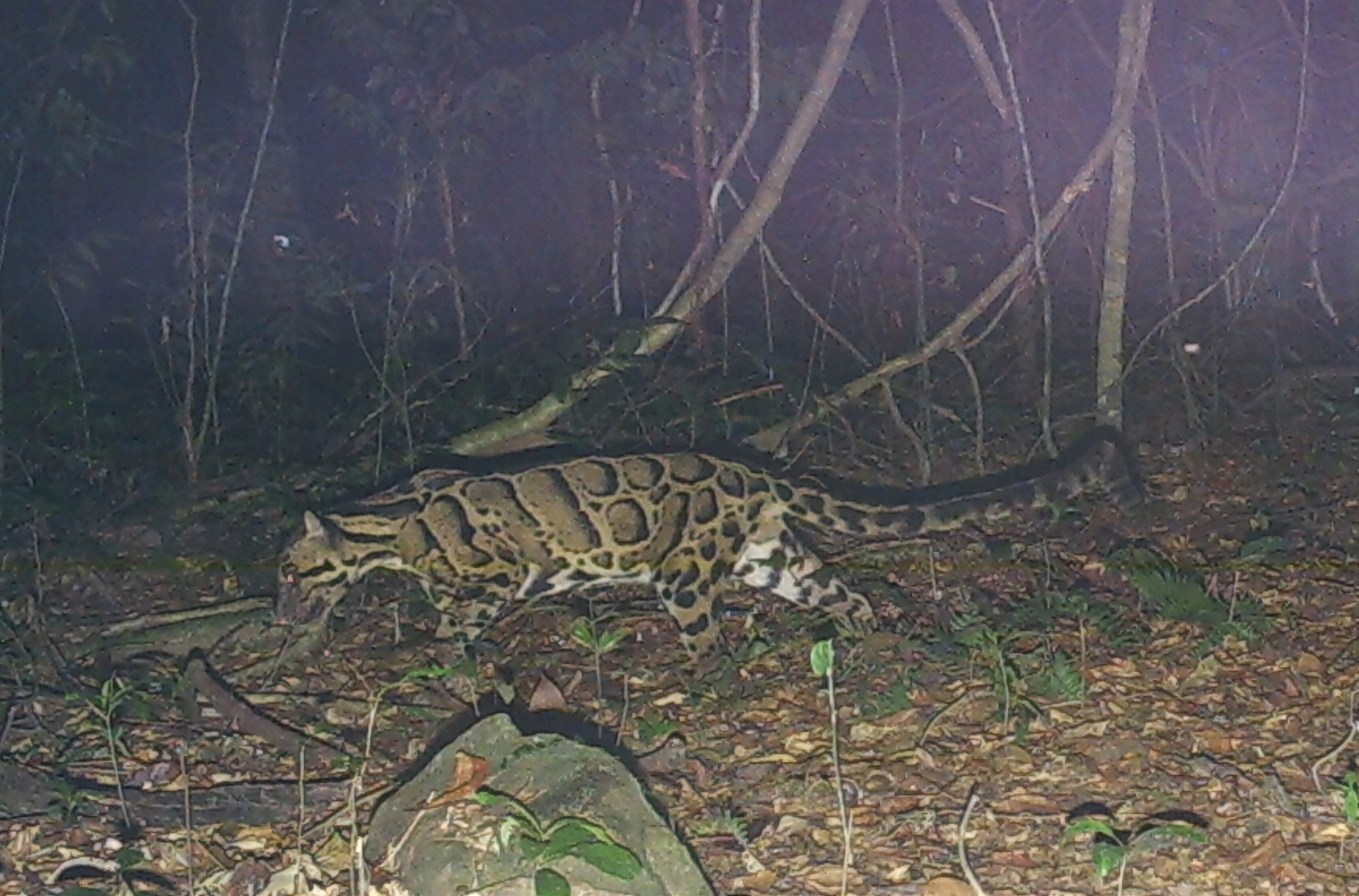 A clouded leopard caught on camera trap in Khao Yai, Thailand in 2010 with a distinctive kinked tail, a trait linked to inbreeding in other cat species (Image: Dusit Ngoprasert)

An even more threatened species?

Despite the 2021 assessment finding a continued decline in mainland clouded leopard abundance overall, with very sharp declines in parts of its range, the species was not moved to the ‘Endangered’ list by IUCN. Its overall threatened status therefore remains ‘Vulnerable’. This is partly due to the strict nature of IUCN Red List criteria. To be listed as ‘Endangered’, a species must have declined or be expected to decline by at least 50% over 10 years or three generations, or have a very small global range or population.

In reality, the mainland clouded leopard could well meet the first of these criteria. The IUCN assessment notes populations likely declined by “much more than 30%” since 1999 in Bangladesh, Cambodia, China, Laos, Myanmar and Vietnam, driven by targeted poaching, snaring and habitat loss. A massive decline in some parts of a species’ range may not be reflected in the overall status if populations are assumed to be stable elsewhere. The mainland clouded leopard assessment worked on the assumption – based on some evidence but without solid data as proof – that populations are largely stable in other countries like India, Nepal, Bhutan and Thailand.

“If actually we’ve got that assumption wrong, and if actually the status in northeast India is declining, or may decline in the future at the same kind of level as it’s done in Southeast Asia, then a higher listing may well have been merited,” said Gray.

“Personally I was quite confident that it should be considered endangered rather than continue as vulnerable,” said Borah. “That probably would change if illegal wildlife trade expands to other countries which have been less affected, like Malaysia and Nepal.”

Borah emphasised that relatively stable populations in countries like India and Nepal are thanks to strong protection laws, anti-poaching activities in protected areas and government support. “If such strong protection isn’t provided in countries like Laos, Cambodia and Vietnam, I think the future of not just the clouded leopard but also other mammals is very, very bleak.”