Conservation campaigners have said China’s ban of trade in wild animal meat cannot be effectively implemented as it still allows trade in wildlife products for use in Chinese medicines, clothing and ornaments.

They have warned that these exemptions are loopholes that will pave way for the buying and selling wild animals’ meat – just as it did in the past.

The Standing Committee of the National People’s Congress announced a ban in the last week of February after suspicions that wildlife sold at a meat market in Wuhan was the source of the current Coronavirus outbreak.

Just last month an agency that investigates wildlife trade reported that the Chinese government had said an injection that contains bear bile should be used to treat patients with serious cases of Covid-19 patients.

Tan Re Qing injections are among the recommended treatments for ‘severe’ and ‘critical’ cases of coronavirus in the COVID-19 Diagnosis and Treatment Plan of the National Health Commission [of China], published on 4 March, according to the London-based Environment Investigation Agency.

The website of the Chinese health agency does show the name of the injection which has “fel ursi”, or bear bile, on the ingredients list. 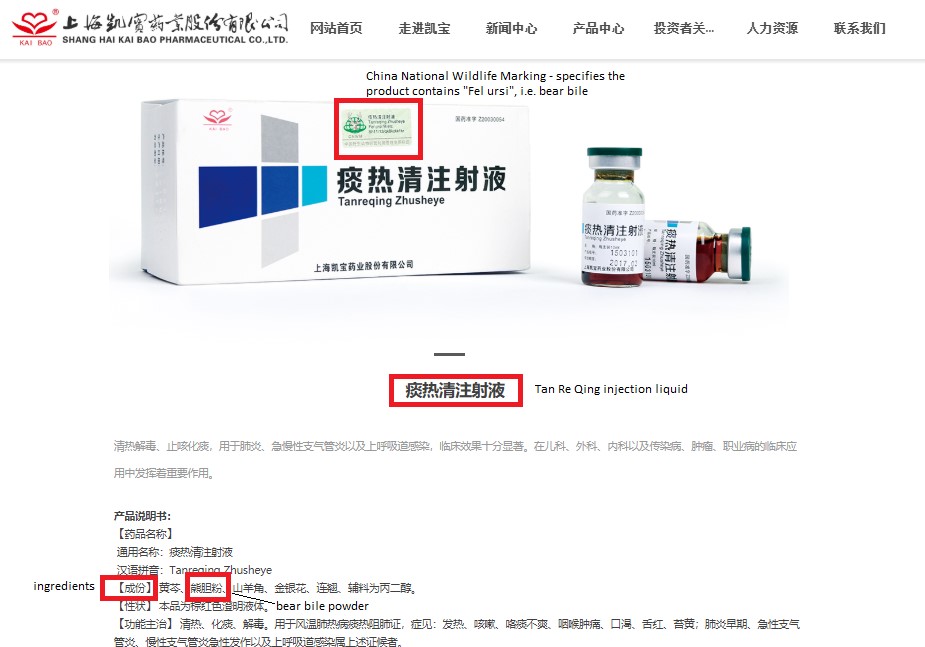 “Aside from the irony of promoting a wildlife product for treatment of a disease which originated in wildlife, promotion of the use of threatened wildlife in medicine is hugely irresponsible in an era of unprecedented biodiversity loss,” said Aron White a wildlife campaigner and China specialist at EIA.

Conservationists say there are nearly 30,000 bears in Chinese breeding farms.

They are kept in small cages and their bile is extracted from their gallbladders using various techniques which all cause severe pain and infection. Experts say in some cases a metal tube is forced through the same wound repeatedly during each bile-milking session.

This results in many of the bears dying from infections or other complications, and those who survive live in agony.

While bear farming for bile is allowed for use in traditional Chinese medicine under the ban, wildlife campaigners have reported that illegal traders also sell other body parts.

Protected animals like pangolins and leopards are also allowed to be traded under the ban, so their body parts can be used in traditional Chinese medicine.

“Although the medicinal benefits of many wildlife products have not been proven scientifically, the belief in the system is strong,” said Terry Townshend a China-based wildlife conservation consultant and founder of Birding Beijing.

“For example, I know of a very well-educated family who have two children, one has had fertility issues and the other works in wildlife conservation.”

“Despite being strongly aware of the lack of scientific evidence, the sibling with fertility issues has used pangolin scales ‘as a last resort’ as they had tried everything else.”

Because of the demand of traditional medicine across Asia, the pangolin is almost extinct in China and is now the most trafficked animal in the world.

Nearly 75% of the wildlife farming industry was for pelt production from animals like mink, racoon dog and fox, according to research by the Chinese Academy of Engineering in 2017.

“In 2018, 50 million animals were bred and killed for their pelts in China,” said Pei Su, CEO and co-founder of Act Asia, an organisation that has been campaigning against fur and pelt industry from captive breeding of wildlife in China.

“The same racoon dogs, minks and foxes that were bred in captivity for fur and pelt were then also sold for their meat.”

Chinese academics agree that there are such loopholes.

“Since fur production accounts for over three-quarters of wildlife trade, if the products are not fully prohibited in fur trade, then we have barely scratched the surface of commercial use of wildlife,” said Jiang Jinsong, assistant professor at Tsinghua University in China.

“And all our endeavours put into wildlife conservation will be in vain.”

An investigation by the EIA in 2012 found that traders who were legally breeding tigers for their skins were also illegally selling their bones for medicines and wine.

As well as large-scale tiger, bear and python farming, China also breeds crocodiles, salamanders and other wild animals in their thousands.

The wildlife farming industry is estimated to have created employment for more than 14 million people and is worth over GBP 56 billion (USD 70.66 billion), according to the research by the Chinese Academy of Engineering.

The Coronavirus pandemic appears to have changed Chinese love for exotic wildlife meat that established their country as the world’s biggest market for wildlife trade, both legal and illegal.

There is growing pressure within China for fundamental reform of the country’s policy on wildlife consumption.

A recent survey carried out by Chinese NGO Shan Shui Conservation Center suggests that majority of Chinese citizens may now be against the consumption of wildlife.

“No to wildlife meat”

Of the more than 101,000 respondents, 97% said they opposed consuming wildlife products while a similar figure expressed support for the government’s ban on the trade.

The main reason given by the 3% who opposed the wildlife ban when answering the survey was because of impacts on wildlife farming.

The survey, carried out by Peking University and seven other organisations, may not be representative of the whole of China’s population.

It was conducted online and via social media so was answered by a high proportion of young people, with a third of respondents being aged between 19 and 30.

“The respondents were weighted towards urban dwellers and also many were in environmental circles, so may have favoured a ban more than the general population,” said Townshend.

What do young people think?

Young Chinese people who spoke to the BBC supported the survey finding.

“I think we definitely support getting rid of illegal wildlife products in the markets,” said Ji (who asked us not to use her full name), a final year university student in Beijing.

“We do not eat wildlife products in our daily meals,” the 21-year-old added.

“Some of my friends in different regions around the country do get offered things like shark fin, snakes or soft-shell turtle by their families because they think they have certain nutrients which are very valuable.”

Ji said she used to eat bullfrogs that were artificially bred when she was in secondary school. But she stopped eating them after she found there could be parasites in the frogs.

“After this Coronavirus outbreak, more young people in China will leave behind this archaic practice of eating wildlife meat.”

Will the ban actually work?

The Chinese government did ban wildlife trade in 2003 after the SARS outbreak in China, but relaxed it within few months.

This time around, wildlife campaigners say, some moves have been promising.

“Since the rise of COVID-19, the Chinese government has investigated over 600 cases of wildlife crime, and hopefully, this greater focus on law enforcement will become the norm,” said Yuhan Li, a wildlife researcher with Oxford University, who has studied the Chinese government’s wildlife policy after the Coronavirus outbreak.

But, conservation organisations say that traditional medicines made from exotic animals and allowing farming of these animals for fur and ornamental reasons will encourage illegal trade on wild animals’ meat.

“They are the loopholes which still represent serious issues, we are looking into them now,” said Zhou Jinfeng, secretary general of China Biodiversity Conservation and Green Development Foundation, a government-supported organisation.

“Apart from the ban of wildlife eating, all other uses of wildlife should be stopped as well.”

“If that amendment does not address those loopholes, this will be a real missed opportunity,” said White with the EIA.

“China must ensure that the revised law comes with strengthened enforcement strategies to prevent illegal wildlife trade from continuing underground,” according to its regional director for Asia, Aban Marker Kabraji.

‘Are we animals?’: Migrants bear brunt of South Asia’s lockdown