Deep inside the riverine belt of Koelwar in Bhojpur district of Bihar, around four to five kilometres from the main road and well out of sight, a dozen labourers are cutting and digging a portion of the Sone River in bright afternoon sunshine. Bare-chested, wielding spades and shovels, they collect sand to load onto a boat. Walk up and down either bank of this major tributary of the Ganga, and the scene replicates itself. Many more labourers wait for sunset, when the next shift will start. And that will be much bigger.

“We are working day and night to load and unload sand on big boats. During the daytime, some manual sand extraction takes place here, but the main work begins at night,” says one of the labourers. A man in his late thirties, he wipes sweat from his body with a thin cotton towel and adds: “JCB and Poclain machines come after dark, in view of the sand-mining ban.” Mechanised, large-scale extraction can only be done under the cover of night.

Since 2017, sand mining in Bihar has been banned between 1 July and 30 September. This year, it was banned from 1 June. This led to a severe shortage of a material that is essential for construction. It drove sand prices higher, leading to a boom in illegal mining. 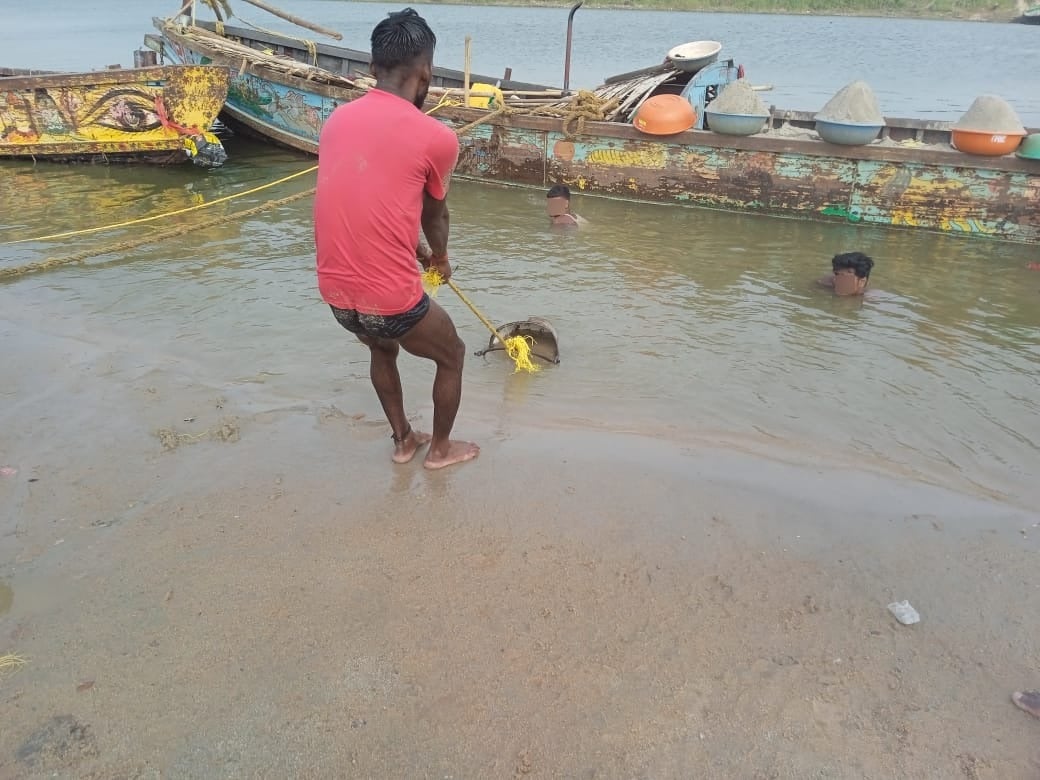 A young supervisor at an illegal extraction operation says sand mining may be banned on paper but the reality is totally different. This illegal operation is in Suraundha Tapu, a remote area in Bhojpur district. It is a hotbed of illegal sand mining along the Sone, but there are many areas like it. “Outsiders are not allowed to enter this difficult terrain and similar places along the Sone in the daytime. It is risky for outsiders to come at night to witness mechanised sand extraction and how hundreds of boats are filled with sand and shipped to Patna, Saran and Vaishali districts,” the supervisor says.

He and most other people who spoke to The Third Pole for this report have not been identified to ensure their safety.

In several places across the state, the sand mafia has built up huge dunes to store what is dug up, and the Sone has borne the brunt of this trade. Hundreds of boats, tractors, trucks and diggers wait to extract, load and transport sand. According to a middle-aged man who runs a small sand-trading business, more than 200 boats from the Sone are unloaded daily at the banks of the Ganga at Pahleja Ghat and Janaki Ghat in Saran district, but the main destination is Doriganj Ghat, about 40 km from Pahleja, where more than 1,000 boats are unloaded daily. All are downstream from the point where the Sone meets the Ganga.

A ghat is a set of steps leading down to a river, and also a place where boats are moored. 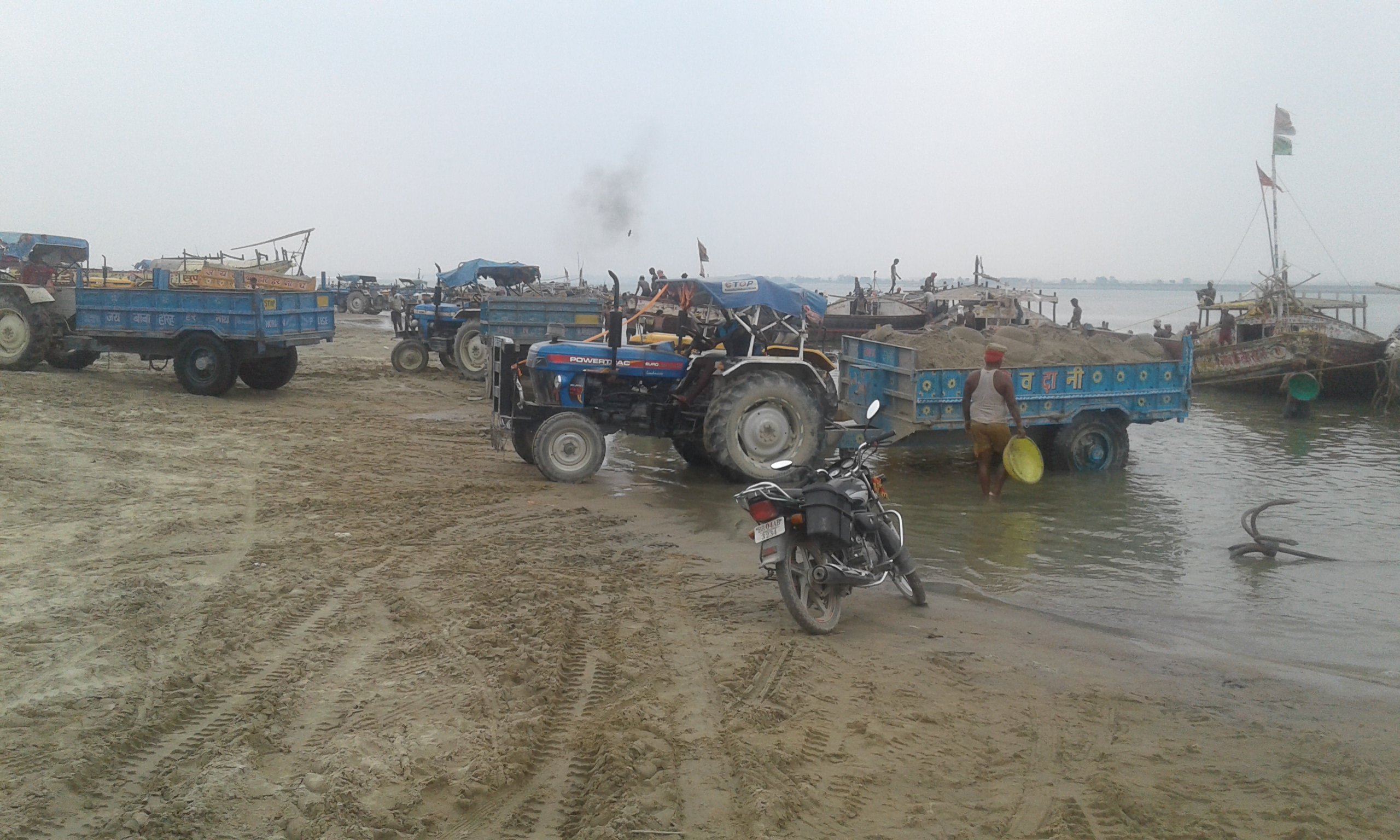 Sand mined illegally on a large scale at night is loaded onto boats during the day in Pahleja Ghat (Image: Mohd Imran Khan)

According to the United Nations Environment Programme, China and India are the critical hotspots for sand extraction, because they also lead globally on infrastructure and construction. Extraction rates are exceeding natural replenishment rates manifold. The Sone’s yellow sand, locally referred to as “golden”, is considered the best quality, and is in high demand.

There is no official data about the scale of sand mining in Bihar. “We have no record of the exact area under sand mining, how much sand is extracted in the state,” says a senior official of the Bihar State Pollution Control Board (BSPCB), speaking on condition of anonymity. A large portion of the business is illegal, despite repeated claims by police and Mines and Geology Department officials that they have cracked down on such operations.

A senior officer at the Mines and Geology Department admits that, ban or not, illegal sand mining takes place daily in rivers across the state. The extraction continues unabated, due to strong links between cartels and local politicians, contractors, criminals and administrative officials, including the police, he adds.

This “nexus” of powerful people drives large-scale illegal sand mining, which is a significant source of money without the need for much investment, says S Chandrasekhar, member secretary of the BSPCB. This results in a big loss of income for the state exchequer and overexploitation of the resource. “It is a big challenge to stop illegal sand mining, because money drives everything. The sand mafia has money and muscle,” Chandrasekhar says.

In Bhojpur alone, district mining officer Anand Prakash says 1,123 vehicles and more than 600,000 cubic feet of sand were seized, 58 people arrested and 133 complaints lodged with the police in the past three months. But there are many allegations of police connivance. At Pahleja Ghat, some contractors in the illegal sand business allege that the Sonepur police station was paid 800,000-900,000 Indian rupees (USD 10,000-11,300) per day to let more than 150 loaded trucks pass. 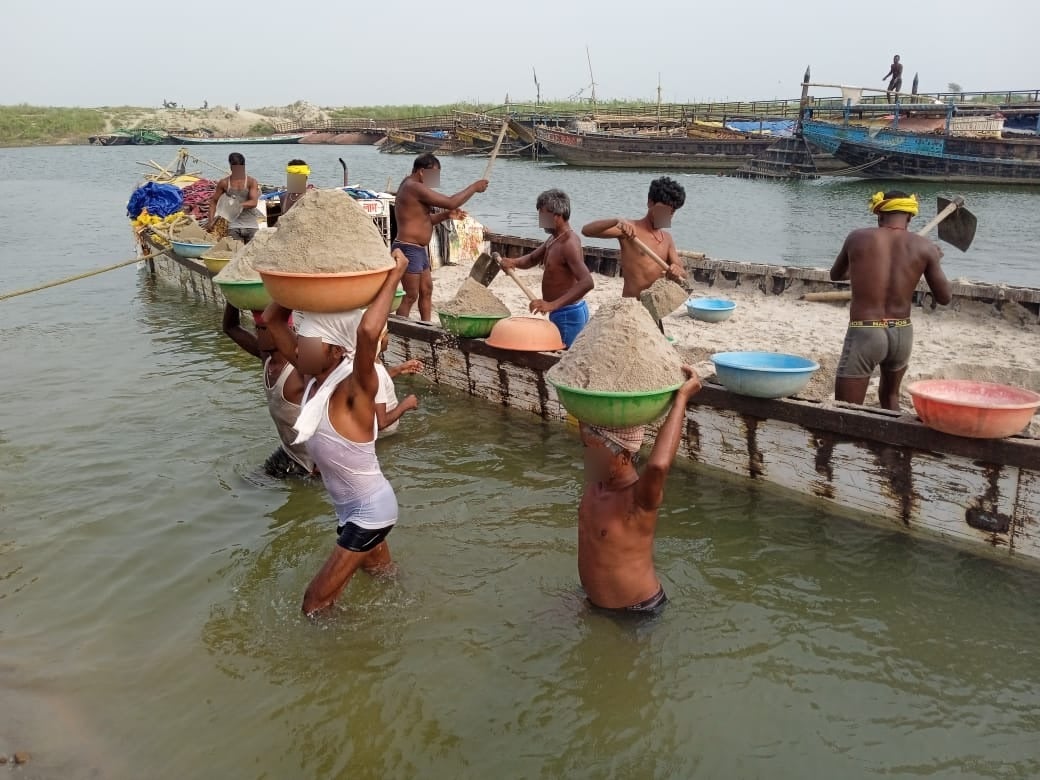 Last year, Janak Ram, then Bihar’s minister of mines and geology, admitted in public that the state government incurs an annual loss of about INR 70 million (USD 880,000) due to illegal sand mining. But sources close to the sand mafia estimate illegal sand mining is worth more than INR 200-300 million annually.

The Bihar government imposed prohibition in 2016, and is keen to make up lost alcohol-sale taxes by increasing its revenue from sand mining. Its sand policy is also intended to generate sustainable, local employment.

If you remove sand from the river, you are digging your own grave

But working conditions are far from safe. The labourer working on the Sone riverbed says he fears for his life, as he points to the riverbank rising steeply 30 to 40 feet above him. If it were to collapse, it could bury him; in July, three labourers across two sites in Bihar were reported to have been killed when huge chunks of sand fell on them during illegal mining operations.

According to officials of the state’s Mines and Geology Department, sand mining was operational in 16 of its 38 districts before the ban. From 1 October this year, the department plans to start mining in 28.

Manibhushan Pratap Sengar, an advocate at the Patna High Court, says it is almost impossible for the government to stop illegal sand mining. “The only way is to regulate sand mining in a proper manner and implement [the state’s] 2019 sand policy for eco-friendly extraction.”

Ramakar Jha, a professor of civil engineering specialising in water resources at NIT Patna, says sand mining is not bad if done in a scientific way, but it cannot be allowed anywhere and at any volume at any time. There should be credible data about the availability of sand at a particular location, and the depth and amount extracted should be regulated, but “so far, this scientific approach is missing, because we have no study on it”.

Dinesh Kumar Mishra, a river expert in Bihar and convener of NGO Barh Mukti Abhiyan, tells The Third Pole that mindless sand mining, largely the illegal activities of the sand mafia, is destroying the Sone and other rivers in the state. “It is scientifically established that a riverbed is like a sponge and contains water even during the dry summer. If you remove sand from the river, you are digging your own grave.” 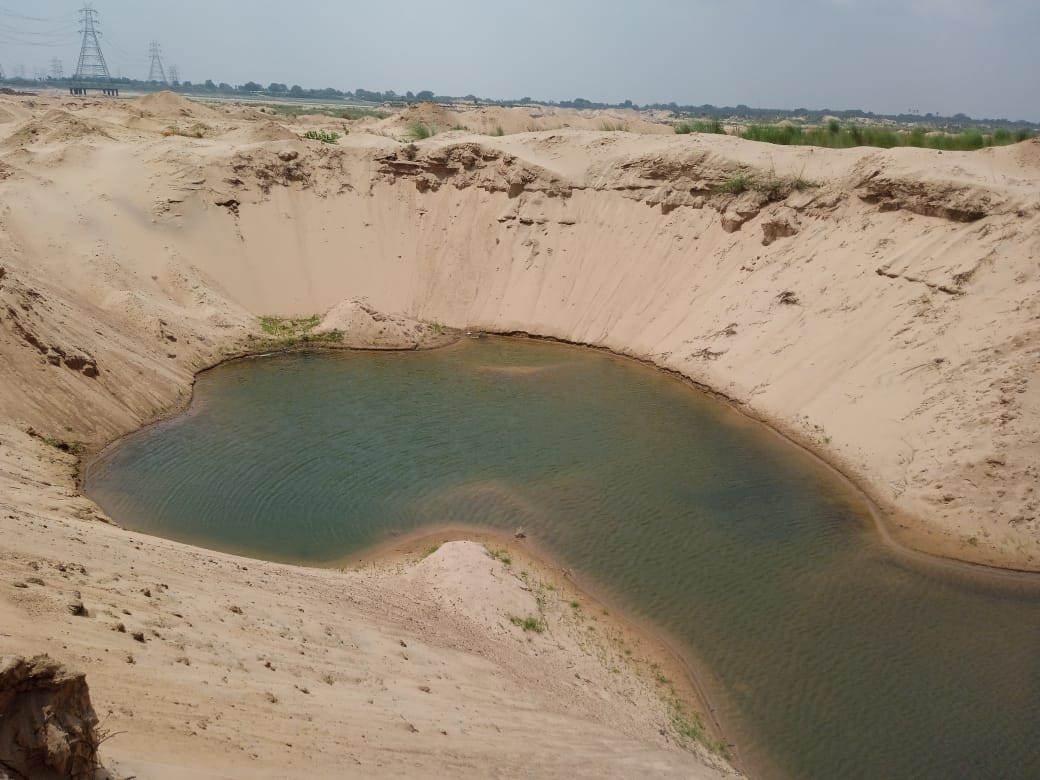 Ranjeev, a river activist who uses only one name, says unsustainable sand mining has already pushed some rivers to the verge of drying up forever. “Mechanised digging of riverbeds in the Sone, Ganga and other rivers has created ditches and big pits. It is affecting the rivers’ natural flow and threatening aquatic habitats.”

Mishra says too much extraction will lower the water table in nearby areas. Gopal Krishna, another environmental activist, warns: “There may be a major problem with drinking water in the near future. Villages around such areas will become ghost places in our lifetime.”

Webinar: Blood on the sand – dangers of riverbed mining in South Asia

Is Cambodia’s thirst for sand putting communities and the Mekong at risk?