For Arun Yadav, a farmer in the eastern Indian state of Bihar, December is the time to tend to his rabi (winter) crops and to protect endangered Greater Adjutant Storks (Leptoptilos dubius). Yadav is one of hundreds of farmers who are ensuring conservation of the “Garuda” as the bird is called among the villagers of this riverine floodplains belt in Bhagalpur district of Bihar.

A towel wrapped around his head and ears as protection from the cold, Yadav stood near a tall tree on which there were two stork nests. “Hum log swechha se Garuda ka dekh bhal karte hain (We voluntarily take care of the storks).”

The bird had been ignored earlier. “We were not aware of the importance of this bird and treated it like any other,” Yadav says. “Everything started changing from 2006-07 when three Greater Adjutant Storks were spotted, followed by six nests. I am one of the few farmers associated with its conservation since then.” 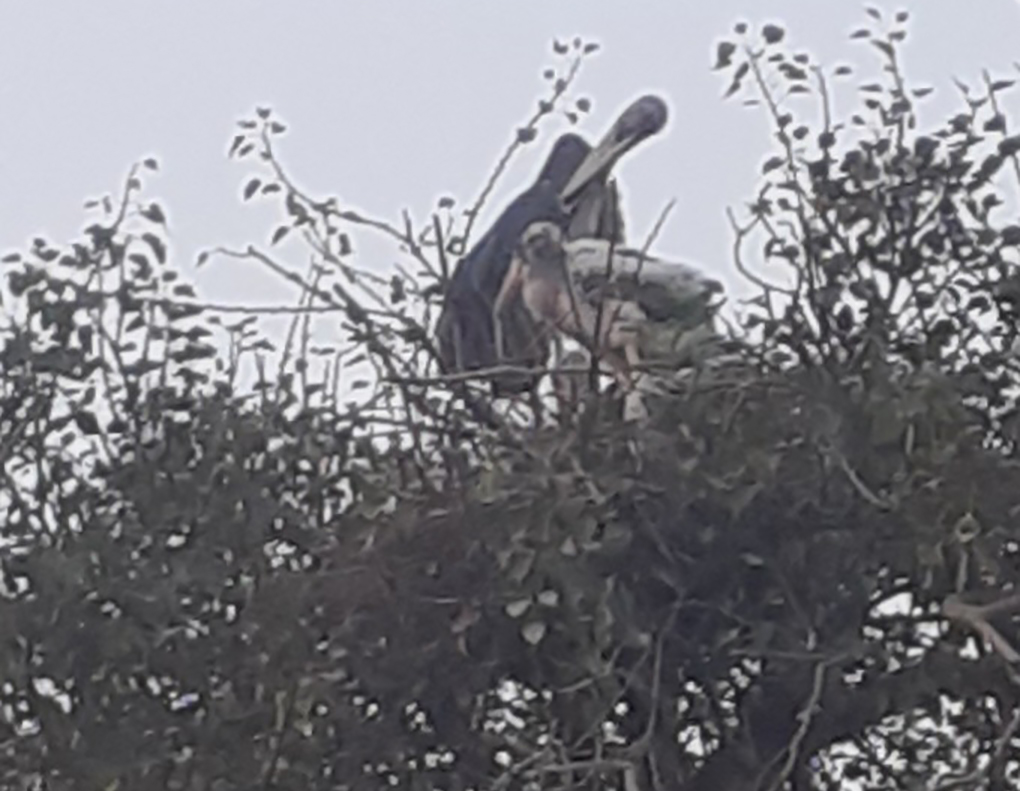 Once found across South and Southeast Asia, the Greater Adjutant is one of the most threatened stork species in the world. It is classified as endangered on the International Union for Conservation of Nature’s Red List of threatened species and listed under Schedule IV of the Indian Wildlife (Protection) Act, 1972. There are only three known breeding grounds – one in Cambodia, two in India, in Assam and in Kadwa Diara of Bihar.

The global population of Greater Adjutant Storks is estimated as 800-1,200, most of them in Assam, where there have been many deaths after these scavenger birds ate plastic bags along with garbage.

But in Bihar, the discovery of breeding pairs and the growth in numbers since 2007 have been one of the happy stories of conservation. A research paper presented by Mandar Nature Club’s Arvind Mishra at the Convention on Conservation of Migratory Species, Conference of Parties (CMS COP 13) at Gandhinagar (Gujarat, India) in February 2020 credited the work of local community conservation groups for this turnaround.

Mishra, a bird expert, first spotted Greater Adjutant Storks nesting and breeding in 2006-07 in the riverine areas in Bhagalpur. He motivated different communities in these sleepy villages of Kadwa Diara to work for conservation. Initially suspicious, the villagers and fisherfolk of the region soon realised the importance of the Garuda and developed an emotional attachment to it due to agrarian benefits and a religious link.

“Within 14 years with active support and involvement of the local community the population of Greater Adjutant has increased from 78 in 2007 to nearly 600 in 2020. It is a manifold jump,” says Mishra, who is also state coordinator of Indian Bird Conservation Network (IBCN). Nests have increased from 130 in 2018 to 177 in 2019.

Earlier the local community was not bothered about the felling of trees where the birds nested, the presence of electrical installations in the vicinity of nesting grounds, or the falling of nests and chicks.

“The elderly and the children in our village help us protect the birds,” says Yadav. Children inform adults if they spot a stranger or an animal near a nest. Women working in nearby farms or just passing by do the same.

The birds help in return by eating rats, snakes and insect pests. Mukund Singh Kushwaha, another farmer, says, “We no longer fear any damage by rats as they [the birds] are taking care by eating them. Similarly, [they eat] insects.”

“For farmers, crops are their lifeline and source of livelihood, and the birds protect them.” 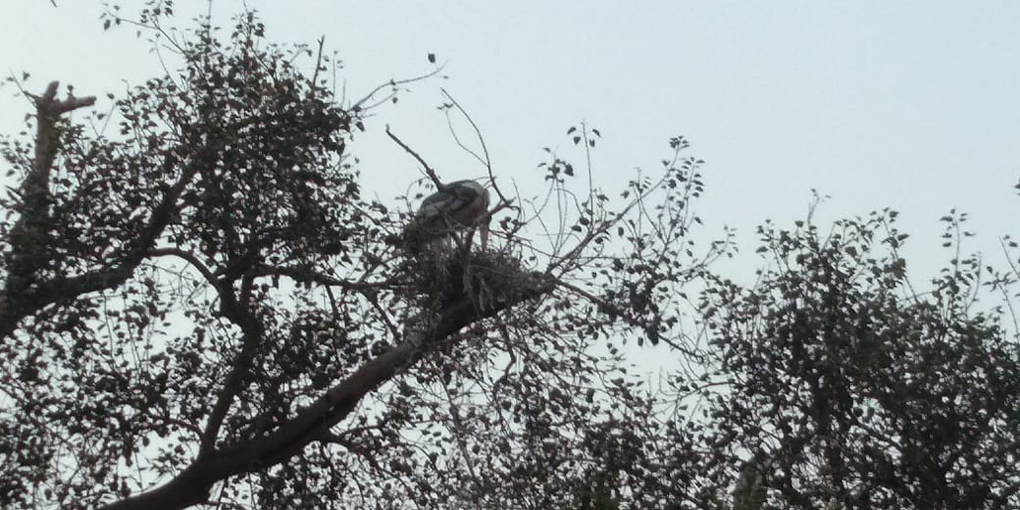 Beyond the personal benefit is cultural significance. The Garuda is the considered the mount of Vishnu, one of Hinduism’s prime deities. Some worship the bird and call it “Garuda Maharaj” (Lord Garuda) or “Guru Garuda” (Great Teacher Garuda). According to Mishra, the campaign to teach the local communities about the bird stressed this aspect.

Ramesh Mandal, another resident of Kadwa Bagri, says, “We don’t allow Gulgulias to roam here in search of birds.” Gulgulia is the name of a nomadic community whose traditional occupation is hunting.

In 2015, the Bihar government started supporting the conservation of Greater Adjutant Storks and a rescue and rehabilitation centre was set up at Sundervan. A temporary rescue centre has also been set up in the breeding zone for first aid to injured birds. When the birds recover, they are released in their natural habitat.

Local environment protection bodies and the state forest department have tried to encourage the community conservation groups by naming them “Garuda Saviours”.

Subhashish, a college student, is one of 30 Garuda Saviours in Kadwa Diara. “If we spot a chick fallen from a nest, we immediately give first aid and inform the rescue centre at Sundervan. We also set up big nets under the trees with nests to save chicks from injuries if they fall.”

He said a team of young Garuda Saviours has successfully convinced local villagers not to cut old trees and to plant saplings to increase numbers of trees favoured by Greater Adjutant Storks.

Along with another Garuda Saviour called Prince Kumar, Subhashish motivates school-age children to help save the birds. “We’re preparing a next generation of Garuda Saviours from the local community because conservation work will have to continue.” 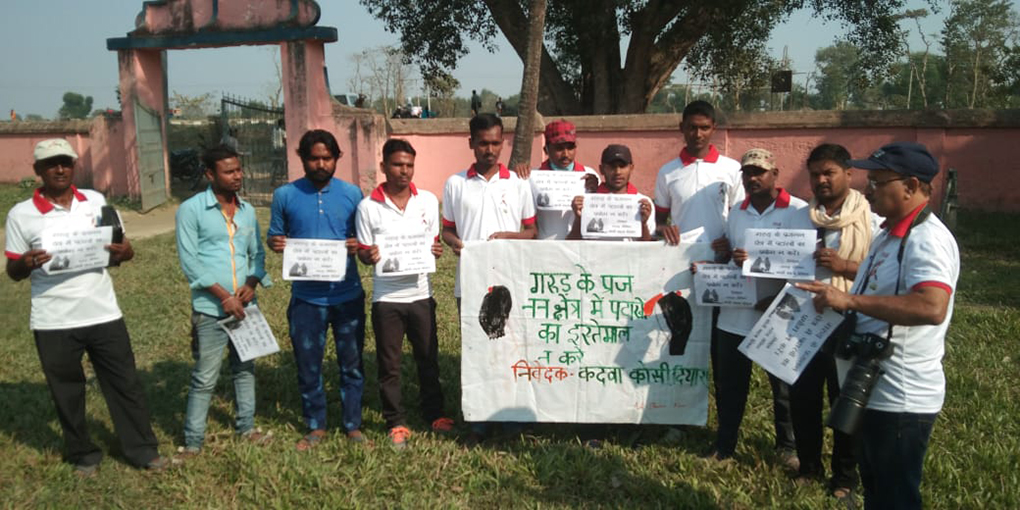 Recently, the Garuda Saviours were trained by India’s famous conservation group Bombay Natural History Society to identify and count the birds, rescue, handle them and provide primary treatment. The Saviours went to a three-day bird festival in Bhagalpur town, and on field trips to hone their knowledge of ornithology.

Mishra has recommended that Kadwa Diara receive protection under the government’s Other Effective Area-based Conservation Measures (OECMs) scheme, a move that has been supported by V.B. Mathur, chairperson of the National Biodiversity Authority of India. Mathur plans to inform the UN Environment Programme about the work being done to protect the Greater Adjutant Stork in Bihar.