On the night of 15 December 2021, Suken Gayari got the shock of his life. The elderly resident of Daurebari village in Assam, northeast India, had just finished dinner and was about to retire for the night when he heard a loud thud in the kitchen. Gayari rushed towards the sound and found that the kitchen door had been broken. When he peeped inside, to his horror he saw a large black bear relishing a pot of leftover rice and curry.

“The bear also ate 18 eggs, and a few chicks that had hatched recently,” says Gayari. Despite his shock, he did not make a sound. “I quietly went back to my room. The bear eventually fell asleep and was in the kitchen the entire night. In the morning, I informed the forest officials who arrived at 6.30 am. They tranquilised the bear and later released it into the forest.”

A veterinarian carried out a medical examination on the animal. This identified it as an ageing Asiatic black bear, suspected to be struggling to hunt for food in the wild.

The bear’s visit to Gayari’s home was one of many recent incidents around Manas National Park in the foothills of the Himalayas. Between October 2021 and February 2022, there were 18 occasions in which Asiatic black bears were seen outside the boundary of the national park and had to be relocated, according to Prabhat Basumatary of the Manas Tiger Reserve (the core of which is Manas National Park) and Daoharu Baro of the Wildlife Trust of India. Both are veterinary officers in charge of catching and caring for animals that stray out of the national park. On two of these occasions people were attacked – although the bears were first provoked, The Third Pole was told.

In contrast, according to the officers’ records there were only eight such events between 2009 and 2016. Between 2017 and 2020, an average of about one bear per year was sighted outside the park, Basumatary says, with similar figures for the preceding years. November 2021 alone saw five incidents in which bears had to be moved back to the forest, with 10 the following month. As of March 2022, the sightings have stopped.

A rise in bear attacks and sightings outside forest reserves was also reported just across the border in neighbouring Bhutan. 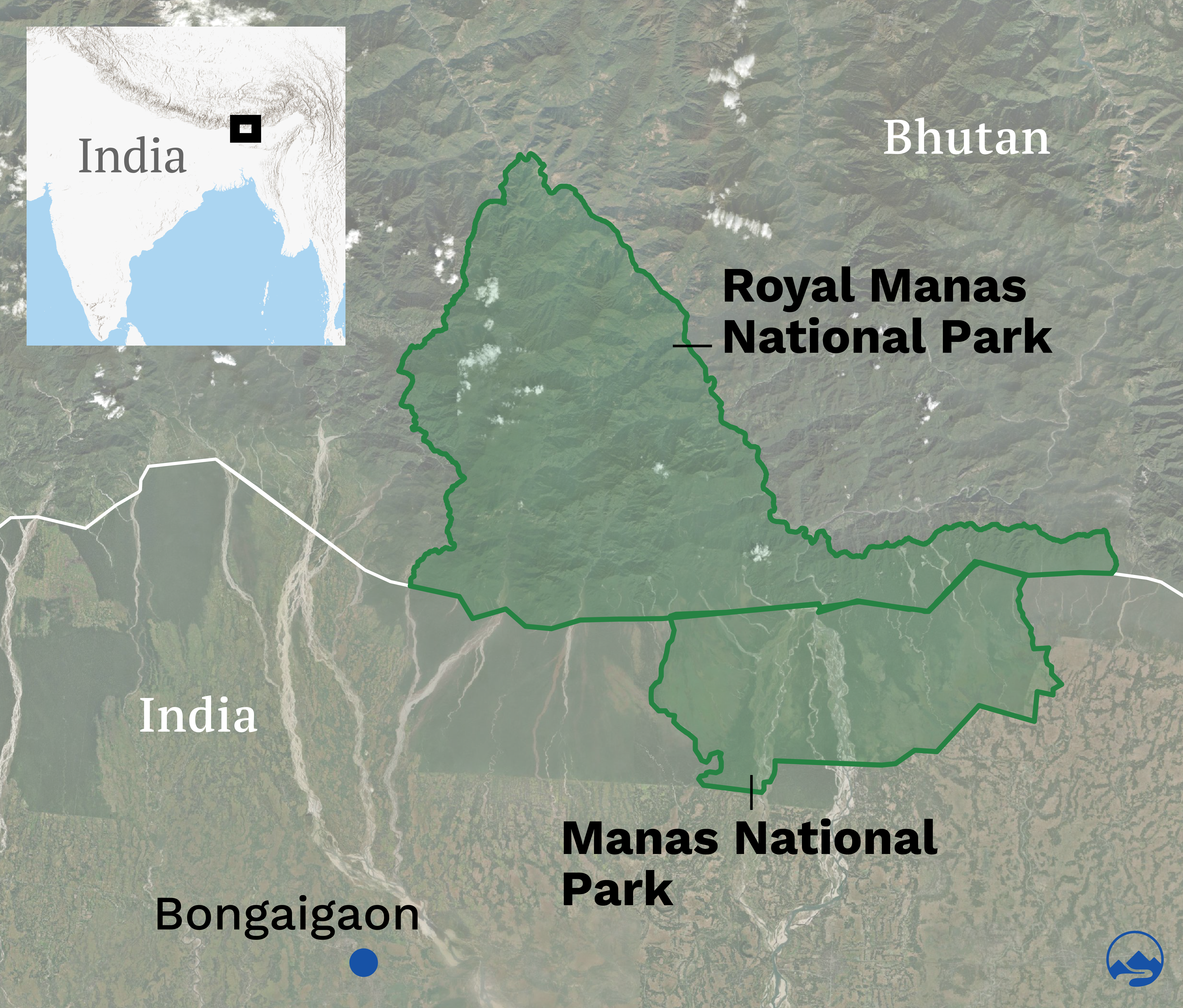 Daurebari, the village where Gayari lives, is one of around 50 settlements on the fringes of the park, which spans an area of 950 square kilometres. It is home to 21 animal species listed in Schedule 1 – those afforded the most stringent protection – of India’s Wildlife (Protection) Act 1972. The Asiatic black bear is one of three species of bear found in northeast India, along with the sloth bear and the sun bear.

Although it is common for bears to stray out of the park’s boundaries once in a while, the increased number became a cause for concern among villagers and forest officials. Some of the bears strayed as far as 10-12 kilometres from the forest and into human habitation. Most of these were adult males, weighing at least 80 kilograms.

Villagers have reported loss of livestock, including goats, pigs and poultry. While human-elephant conflicts are common in this part of the country, human-bear conflicts were previously largely unheard of.

“On the night of 5 December, one bear ate a small goat at my neighbour’s. It left behind two of the goat’s limbs. I had never heard of or seen such incidents before,” says Rupnal Kherkatary, who is in his 70s and lives in Rajabeel village, near Daurebari.

An Asiatic black bear being chased by an elephant in Rajabeel village on 6 December 2021. The forest in the video is adjacent to Rupnal Kherkatary’s house. When the bear’s presence was detected, the forest department brought in elephants to help drive the bear out of the undergrowth. (Video: Rupak Das)

Prabhat Basumatary, forest veterinary officer of Manas Tiger Reserve, has been involved in 13 out of the 18 rescue cases.

“Since I joined Manas in 2006, I have come across a few cases of bears wandering into human habitat. These were few and far between. But it happened on an unprecedentedly large scale last year, and continued until February,” says Basumatary.

After the bears are tranquilised, a veterinarian carries out a medical examination. They are weighed and their teeth are checked to determine their age. Those that need treatment are sent to a nearby rescue centre and released in the forest when they have recovered. So far all the rescued bears have been released.

A bear caught outside the national park between November and December 2021. It was transported back to the forest and released. (Video: Rupak Das)

Why are bears on the move?

“Some are saying that it is a sign of an impending earthquake. Forest officials are saying that the number of bears must have increased, or that the bears must have come down from Bhutan to hibernate,” says Mahendra Basumatary, a core member of the Manas Maozigendri Ecotourism Society, a community-based group that has been working to revive and conserve Manas National Park since 2003.

Elsewhere in India and in other parts of Asia, it is common for Asiatic black bears to enter human settlements and kill livestock, according to Nishith Dharaiya, an IUCN sloth bear expert and associate professor at Hemchandracharya North Gujarat University in Patan, Gujarat. But did the behaviour suddenly rise in frequency for those five months?

Dharaiya gives three possible reasons for bears straying into human habitat: lack of food in the forest, degradation of their habitat and an increase in the bear population. Harendra Singh Bargali, the deputy director of conservation NGO The Corbett Foundation, echoes Dharaiya.

Anurag Singh, the chief conservator of forests with the Bodoland Territorial Council, the most senior forest service officer in the area, said: “The bears generally live in the upper regions of Bhutan. During the lean season, at the beginning of winters, sometimes availability of food and water may become an issue. That’s when the bears come down in search of food. These could be some of the reasons behind the unusual number of bears straying out, but we can’t confirm unless we conduct a proper study. This doesn’t happen every year.”

He added that the Bodoland Forest Department is in touch with the Bhutanese government. “We are communicating with the forest department there and are trying to understand the issue. A core group has been formed in Manas to study the situation and report to the government. But Bhutan is now closed due to the pandemic, and we can’t really come to a conclusion unless we study their habitat. Additionally, we also need to take permissions and have official procedures to fulfil to be able to conduct a joint study.”

Lack of data and research

A matter of concern is that in India, there is limited data on bear populations or the status of their habitats, says Bargali. This means there is no way of knowing whether the bear population has suddenly expanded.

“No animal wants to get into any conflict with human beings. But all species of bears in India are in conflict with humans. We should study the status and distribution of bears in India, and why these conflicts are happening. Despite being a Schedule 1 animal under the Wildlife (Protection) Act 1972, bears are neglected in India, because other animals like tigers, rhinos, lions and elephants get priority. Most funds go toward research on those animals,” he adds.

Bears are neglected in India, because other animals like tigers, rhinos, lions and elephants get priority. Most funds go toward research on those animals.

Without proper research, says Bibhuti Lahkar, the division head of the Guwahati-based NGO Aaranyak, it is impossible to suggest what to do. “We need to conduct studies to understand this behaviour and prevent human-bear conflicts, and any untoward incidents in the future.”

Without policies guided by proper research, fear can spread fast, with adverse consequences for people and wildlife. In January, villagers in Koimari killed a bear cub and buried it by the river. When word of the cub’s death spread the forest department was informed, and a case was lodged against those responsible.

To prevent such incidents, Dharaiya says, researchers will have to observe how local people perceive bear visits, while also studying the movement of the animal and the availability of food during different seasons. Depending on the findings, a food calendar for different seasons could be prepared so that certain trees and bushes can be grown in the forest. This might prevent the bears from straying in search of food.

As the brown bear thrives in Deosai, villagers feel threatened