In summer 2020, I caught glimpses of a creature I had never seen before, at the point where the Varuna and Ganga rivers meet in the holy city of Varanasi. It was early evening, and I was looking at the rushing monsoon floodwaters.

I have had many memorable birding experiences at this confluence. Varanasi, in the north Indian state of Uttar Pradesh, is famous for its ghats (series of steps leading down to a river), and I often go to Adi Keshav Ghat, the site of the ancient Adi Keshav temple. Brown- and black-headed gulls migrate here in large numbers. On some occasions smaller flocks look like paper boats swaying on the water; on others larger gatherings are like a wall arising from the water. I have seen the black kite, in healthy numbers, and once a single great crested grebe. A frequent and endearing view is of two species of kingfisher (white-throated and pied), atop separate poles on the same fishing boat.

Over the past three years I have spent numerous mornings and evenings here soaking in the beauty of the river, but this evening, on August 29, was different. Suddenly, there were grey forms, unfamiliar in shape and size, against the muddy water. The bodies – two of them – repeatedly popped up and then disappeared beneath the waters.

It is expected that the development of waterways in 1,620 km of the Ganga might cause their extinction.

It took few minutes to sink in that these glimpses were indeed of the rare Gangetic river dolphin. They moved playfully in circles, as if teasing me with repeated glimpses, just 40 metres from me.

Even closer to the dolphins was a group of children, bathing in the river. I could hear the happy sound of them playing. Some unmotorised fishing boats passed by. I watched the dolphins for about 30 minutes.

The next evening, I returned at the same time with couple of interested friends and some binoculars, in hope of another glimpse. The skies were cloudy, weather pleasant and the river swollen. We were in luck, and the binoculars enabled us to get a clear view of the dolphins’ long, thin snouts.

Over the next week I came back multiple times – on three days at around the same time, 5pm, and once around 5am – but my luck had run out. By then, the dolphins had probably had enough of me.

The Gangetic river dolphin, India’s national aquatic animal, is classified as endangered, with a population of only 1,200-1,800 individuals.

In Uttar Pradesh, conservation groups counted 41 dolphins along a 180-kilometre stretch of the Ganga in October 2020. This is an increase from 35 in 2019 and 22 in 2015, but the chance of a sighting remains low. 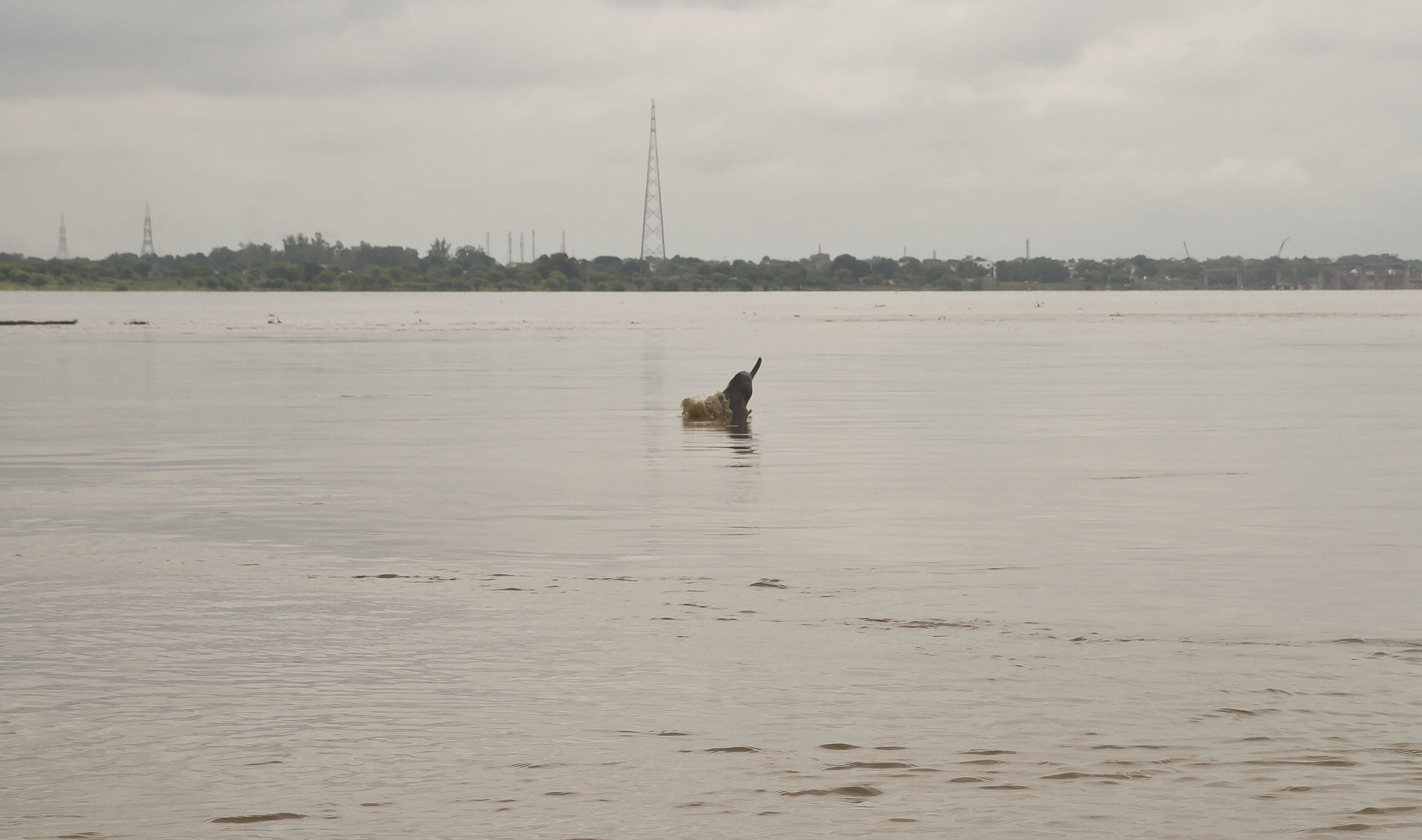 They are essentially blind, and use high-frequency clicks to catch fish, communicate and navigate in the muddy depths. Researchers say that dolphins are likely to head for river confluences, as there are greater quantities of fish.

People who live near where I saw the dolphins told me that even 15 years ago they were not difficult to spot and were frequently caught in fishing nets. However, local people now only see them during the monsoon. The species, they added, is not shy.

After my encounter with the river dolphins, I remembered Zak Klausner, a traveller who told me he had spotted them at the historic town of Chunar, about 30 km upstream from Aadi Keshav, as he rowed solo from Allahabad (now officially named Prayagraj) to Varanasi.

I also read that “dolphins prosper in deep pools and one such is near Dhakwa [in Varanasi]”. The village is about 25 km downstream of Aadi Keshav.

On October 8, I visited Dhakwa with friends but did not see any dolphins. We then went to the village of Kaithi – about another 5km downstream, where the Gomti river flows into the Ganga. At this confluence, early on a clear morning, we spotted four dolphins.

We remarked that the waters at Kaithi looked much wider and cleaner than those at Aadi Keshav; pollution poses a serious threat to river dolphins. 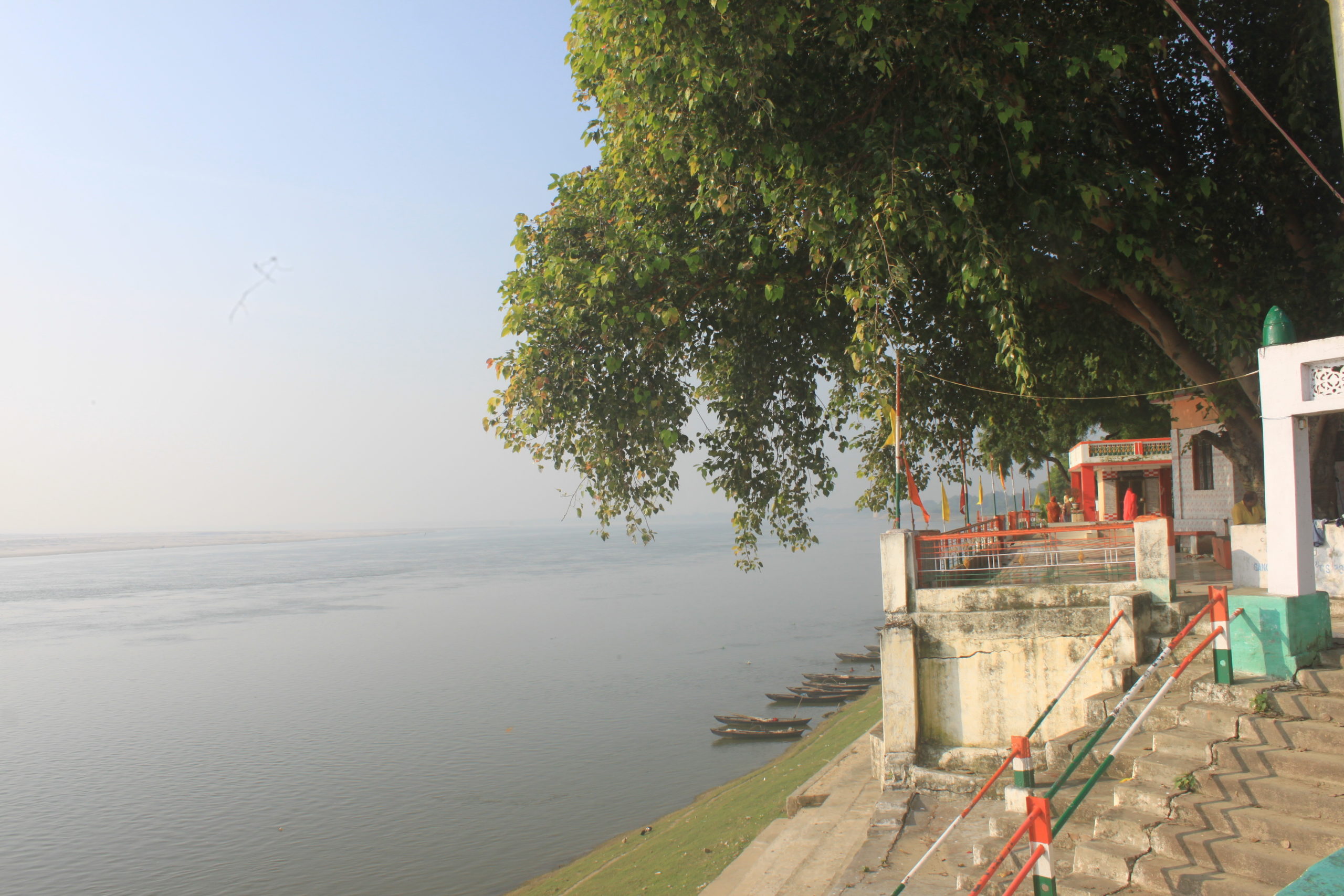 This made me think back to Adi Keshav Ghat, where I first saw dolphins.

Less than half a kilometre away upstream is the northern boundary of the Turtle Wildlife Sanctuary. This 7 km protected stretch of the Ganga was established in 1989 to conserve turtles and other aquatic creatures. It was also hoped that the carnivorous turtles would reduce pollution by eating the corpses that are released into the river here. Sand mining and dredging is banned in the sanctuary, but river traffic, sewage and waste threaten its biodiversity.

But plans are afoot to denotify the Turtle Wildlife Sanctuary. The Indian government wants this section of the Ganga to become part of its 1,620km-long National Waterway 1 (NW-1). This will lead to dredging of the river, construction on the banks and other actions with consequences for biodiversity.

This waterway, which will run from Allahabad to Haldia, also includes the Vikramshila Gangetic Dolphin Sanctuary – India’s only dolphin sanctuary. The 60-68km protected stretch of the Ganga is downstream from Varanasi in the state of Bihar.

I asked Nachiket Kelkar, a researcher who studies the dolphins, about the impact of NW1 on the endangered species. He said, “Preliminary observations indicate that the dolphins might be negatively impacted by the dredging,” but added that systematic studies have not been conducted yet.

Samir Sinha, head of conservation at Wildlife Trust of India, who has studied Bihar’s wildlife for years, added, “For conservation of a species like the dolphin, the stretch of the Vikramshila Gangetic Dolphin Sanctuary is not sufficient. Other stretches of the river with high population density of the population also warrant conservation attention.”

A recent study on the impact of waterway construction paints a gloomy picture for the dolphin’s future. The authors warn that “an inevitable consequence is the massive increase in vessel traffic and river pollution, which will have adverse impact on the Gangetic dolphin population” adding, “It is expected that the development of waterways in 1,620 km of the Ganga might cause their extinction.”

Will I, and future generations, get to see the Gangetic river dolphin in the years to come? Or will the national waterways prove disastrous for India’s national aquatic animal?

In August, the Indian government launched Project Dolphin to boost the conservation of river and sea dolphins. In addition to protecting dolphins, the project aims to promote a healthy river ecosystem and in the process protect other species.

I hope that, enabled by such projects, we can lessen our impact on dolphins and other species. By engaging with people – like-minded and otherwise – we can find a solution, even an imperfect one, that serves the river and its denizens.

Note: The Third Pole asked India’s Ministry of Environment, Forest and Climate Change, and the Inland Waterways Authority of India to comment on the impact of National Waterway 1 on the Gangetic river dolphin. This article will be updated if a response is received.