A forlorn tiger, the king of the jungle, wonders how the same jungle has been sold off without his permission. The wry humour, sadness and perplexity at the strangeness of the world are all characteristic of the style of cartoonist Deborshee Gogoi.

An academic by profession – he is an assistant professor in the Department of Commerce at Digboi College in Assam – the 37-year-old turned to cartoons as a way to illustrate the devastation humans have caused to his beloved wilderness.

Gogoi grew up near the Bherjan reserve forest in Tinsukia, Assam’s easternmost district. As a child, he cycled with his friends in the rainforests near his house. Once he tried to re-enact the role of Mowgli from The Jungle Book by swinging from a tree and ended up with multiple fractures in his right hand. “In fact, I would never open the gates to enter our house. I would always jump the wall. I was always wild,” he said with a smile during a phone call with The Third Pole. 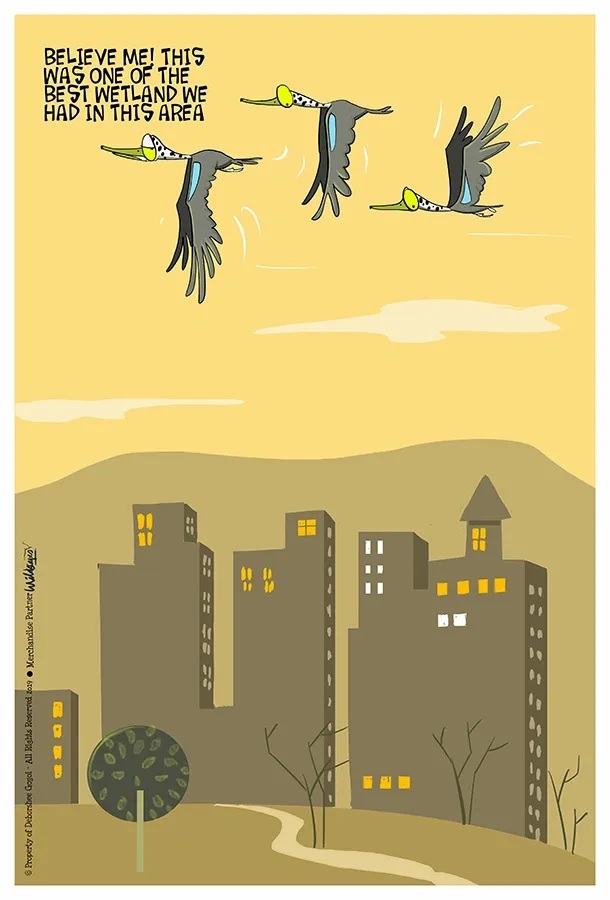 An incident during his schooldays sowed the seeds of what he would later become. His father had a printing press. One day, a man who worked in the press took his brother for a walk and they saw an exotic bird. The man hit the bird with a stone, injuring it. There was a furore as people from an NGO and local journalists came to Gogoi’s house to assess the animal. They told him that it was a migratory bird from Siberia. Gogoi was intrigued when he realised that birds from faraway countries came so close to his house, sparking his interest in the fauna around him.

Gogoi was introduced to the world of art as a child by his neighbour Bipin Chetia, who at the time was the vice-principal of Tinsukia College. “He was a very good artist and created many sketchbooks. I was inspired by him,” he said. As a child, Gogoi used to imitate and draw cartoon characters like Mickey Mouse and Donald Duck. Later, when he was at college and university, he started making cartoons about social issues.

He found that humour was an effective medium to translate his thoughts and create awareness about nature. To him, cartoons and comic strips are a way to give a voice to voiceless animals. “I can make an elephant or a rhinoceros talk,” Gogoi said.

In 2000, at the age of 17, Gogoi came first in a district-wide cartoon competition. He ran his college’s wall magazine and drew cartoons based on his life. In 2018 he started Wildscapes, his venture to promote environmental awareness through cartoons, illustrations and comics.

An avid birdwatcher and photographer, Gogoi has explored the fauna in and around Assam’s Dibru-Saikhowa National Park and the Maguri-Motapung wetland (locally called Beel). This is near the site of the recent devastating gas well explosion in Baghjan, Tinsukia. He said the wetland is like his second home and he learnt birdwatching there.

See: In Assam – a wetland too popular for its own good

“It is just 7 kilometres from my house. Whenever I get time I go there, to see the sunrise or the sunset. In fact, it is the best spot to gaze at the stars. Since it’s a rural area, people sleep early and the night is still. The sky is clear and serene. We sit on a bamboo bench and listen to the birds, insects and nature around us,” he said. He has made a comic strip about the wetland, and co-authored a coffee-table book called Birds of Maguri-Motapung with photographs of 36 species of birds. And in 2016 he and his friend Porag Jyoti Phukan recorded a bird called a white-browed crake for the first time in the Indian subcontinent.

There was a time when the wetland was a killing field for hunters of migratory birds. In the early years of his birding life, Gogoi and a group of friends tried to raise awareness about this biodiversity hotspot through social media. Then, when tourism started to grow, local people turned into conservationists. Some local boys became birding guides. Gogoi said, “We were successful in creating a model in which tourism and conservation could go hand in hand. It is an example for the world. A genre of tourism grew here – birdwatching tourism. It is an important destination for the international birdwatching community. You won’t get this kind of bird diversity in all of Europe.”

The recent explosion in Baghjan, a man-made disaster, burned a huge patch of grassland and many endemic species have disappeared. But Gogoi is hopeful. “If fresh floods come, the grassland might regenerate. The uniqueness of the grassland will make the birds come back. But it is just an assumption. We will have to wait and watch. The land here is very fertile and the grassland will hopefully recover. If this habitat is destroyed, a whole environmental and socio-economic cycle will be disrupted,” he said. He said he could not imagine life without his second home.

As well as going birding in unexplored parts of north-east India, Gogoi’s place of work keeps him busy. The town of Digboi shares a border with the Dehing Patkai rainforest, and the area is rich in biodiversity. Digboi College has started a fruit garden for animals and birds, and barking deer and sambar deer roam the 25-acre campus. Leopards also visit, and the college has recorded 177 species of rare birds, five species of squirrels, seven species of primates and a lot of snakes. Gogoi has made many cartoons and caricatures to illustrate the richness of the biodiversity of Dehing Patkai and to campaign against the proposed coal mining in and around the rainforest.

This self-taught artist is one of the few wildlife cartoonists from the region. His cartoons, caricatures, illustrations and comic strips are based only on the species of north-east India. In a bid to take them to the world he has set up an online shop, where admirers of his work can buy items like mugs, T-shirts, posters, greeting cards and notebooks.

After a busy day at college, he works on his cartoons until late at night. “I keep thinking even when I go to sleep. I remember conversations and try to put them down in the form of cartoons,” he said. One such conversation was with one of his teachers. Gogoi asked him if he had seen the critically endangered Bengal florican during his childhood, describing the bird in detail. His teacher asked him several things about it and then said something that left Gogoi both aghast and amused: “It’s not very tasty.” This became the basis of several of his cartoons. 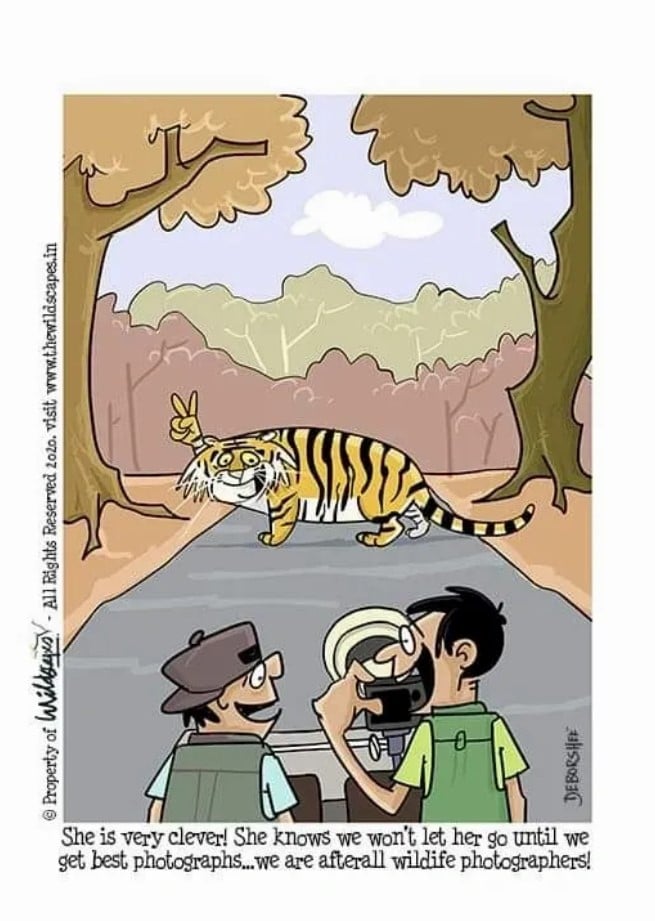 His work is also based on the experiences of wildlife photographers. Some situations are funny, such as one showing photographers intruding into the privacy of animals. Others are more sombre; one shows the destruction caused by mining, with tombstones of extinct species strewn across an area. “They are now paying for it,” he says.

He plans to show children his work so that they understand the importance of biodiversity. “Earlier when a child cried, we showed them a bird or a dragonfly. Now, we hand them the mobile phone,” he said with regret. Gogoi argues that a thriving economy cannot decide whether a country is rich. “We can be rich only if our biodiversity is rich,” he said.

All images in the piece are by Deborshee Gogoi, used with his permission.